The US Justice Department is opening an investigation into policing practices in Minneapolis after the murder conviction of former officer Derek Chauvin, it has been announced. Chauvin, 45, was unanim

The US Justice Department is opening an investigation into policing practices in Minneapolis after the murder conviction of former officer Derek Chauvin, it has been announced.

Chauvin, 45, was unanimously found guilty of the second and third degree murder and second degree manslaughter of George Floyd, 46, on 25 May, last year.

He said he was launching the investigation to see whether there is "pattern or practice" of unconstitutional or unlawful policing in the city.

It will examine the use of force by officers, including during protests, and their handling of people with behavioural or mental health issues.

Ultimately, it will determine whether the Minneapolis Police Department engages in discriminatory practices, he said.

It is unclear what period the probe will cover and whether it will begin with Mr Floyd's death or extend to the years before that.

The investigation could end in the force facing a lawsuit, instead of the settlements or consent decrees that have been agreed previously.

Justice officials are already investigating whether Chauvin and the other officers present at Mr Floyd's death violated his civil rights.

The police department is also being investigated by the state's Department of Human Rights, which is investigating its practices over the past decade.

Minneapolis mayor Jacob Frey said he and city officials "welcome the investigation as an opportunity to continue working toward deep change and accountability in the Minneapolis Police Department".

The city council also issued a statement supporting the investigation, saying its work had been constrained by local laws and that it welcomed "new tools to pursue transformational, structural changes to how the city provides for public safety".

It is without doubt a historic verdict, which transcends the individual and his horrific crime. But many people are asking if this is truly an inflection point for race relations in America.

The celebrations and collective relief in Minneapolis have no doubt reverberated and been heard around the world.

President Joe Biden spoke at the White House calling the trial an all "too rare" example of justice delivered and a "stain on the nation's soul".

He also acknowledged that there is still much work to do to end systemic racism across America.

And perhaps the most poignant tribute and message after the trial came from George Floyd's younger brother, Philonise.

He drew a direct line from the lynching of 14-year-old Emmett Till in Mississippi in 1955 and the murder of George Floyd.

The arc of history still ugly and unchanging through all those years.

It is also not lost on many here - and particularly black Americans - that as the trial rumbled on for those three long and painful weeks, others were dying at the hands of the police - most often as they were stopped for minor alleged offences.

The most visible was the case of 20-year-old Daunte Wright.

He was dead just 10 miles from the Minneapolis courthouse where Derek Chauvin was on trial - killed when a white police officer apparently mistook her handgun for a Taser.

But there are also reasons to be positive.

What happened to George Floyd has certainly also galvanised a movement for change.

It provoked one of the largest protest movements this country has ever seen - the scale of which has not been witnessed since the civil rights movement in the 1960s.

Public and political discourse about what it means to be black or from an ethnically diverse background has also been injected with fresh insight. 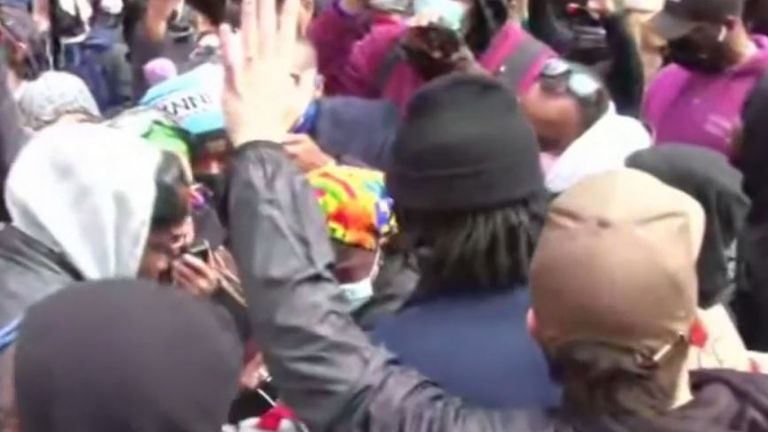 Corporations, government bodies and individuals are all examining their role in perpetuating institutional racism and how best to combat it.

Police reforms have also been enacted in many states, but America is watching to see if the highly polarised Congress can find bipartisan support for a federal police reform act - that will be challenging.

But there are also profound questions about whether Derek Chauvin would have been convicted if there had not been harrowing and damning video evidence.

That question of course cannot be answered today, but the hope is the trial will set a precedent for how ethnically diverse communities are policed and what is legal and acceptable force.

The trial and the conviction of Chauvin - who was supposed to serve and protect - should set new rules and not be allowed to become an exception as has all too often happened before in America's ugly story of race relations.

US National Guard troops removed from inauguration over...

Brady throws Super Bowl trophy to teammates on another...

You can now buy a Tesla with Bitcoin, says Elon Musk