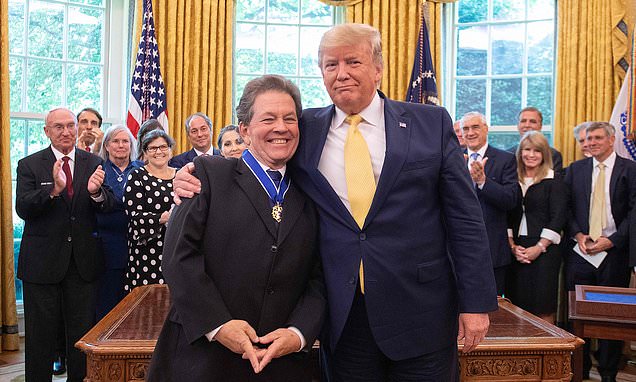 By William Cole For Mailonline and Associated Press

President Donald Trump has awarded the Presidential Medal of Freedom to a controversial economist whose tax-cutting theories have guided the views of world leaders since the 1970s.

Allies credit Laffer with helping to spur income tax reductions around the world and boosting national economies as a result. Critics say the tax cuts he has espoused over the years have not produced the promised results and have instead contributed to growing income inequality and soaring budget deficits. 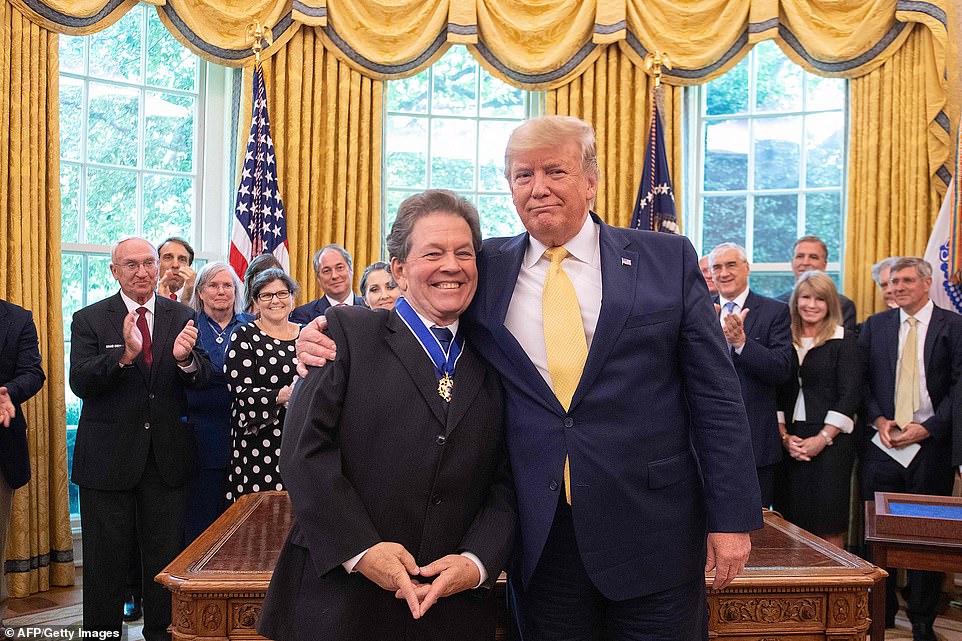 Arthur Laffer, 78, advised Trump during his presidential campaign and co-wrote a flattering book, 'Trumponomics: Inside the America First Plan to Revive Our Economy'

Trump said that Laffer proved the best way to grow the economy and raise government revenue was not to increase tax rates but to adopt strong incentives 'that unleash the power of human freedom.'

'Few people in history have revolutionized economic thought and policy like Dr. Art Laffer,' Trump said during a ceremony in the Oval Office.

Trump used the ceremony to highlight the state of the economy under his watch. The president credits his $1.5 trillion tax cut package for boosting the economy, which sported a 3.6 percent unemployment rate in May and has U.S. stock markets standing near record highs. But the federal deficit also soared. It's up nearly 40 percent through the first eight months of the budget year. He did not address that aspect of the tax cuts. 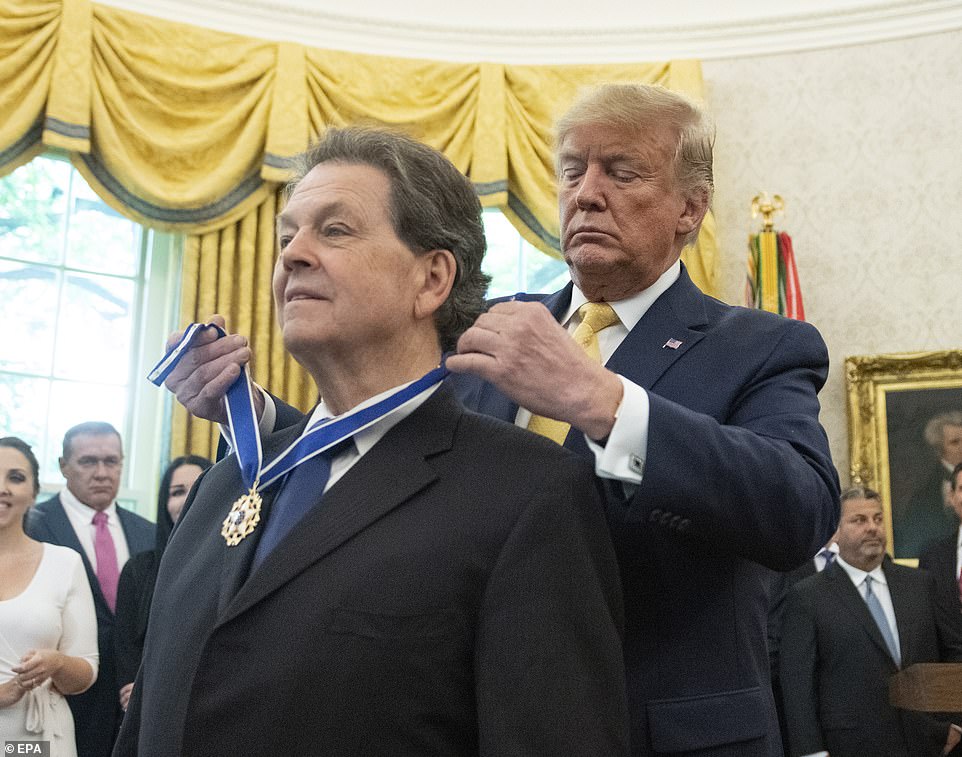 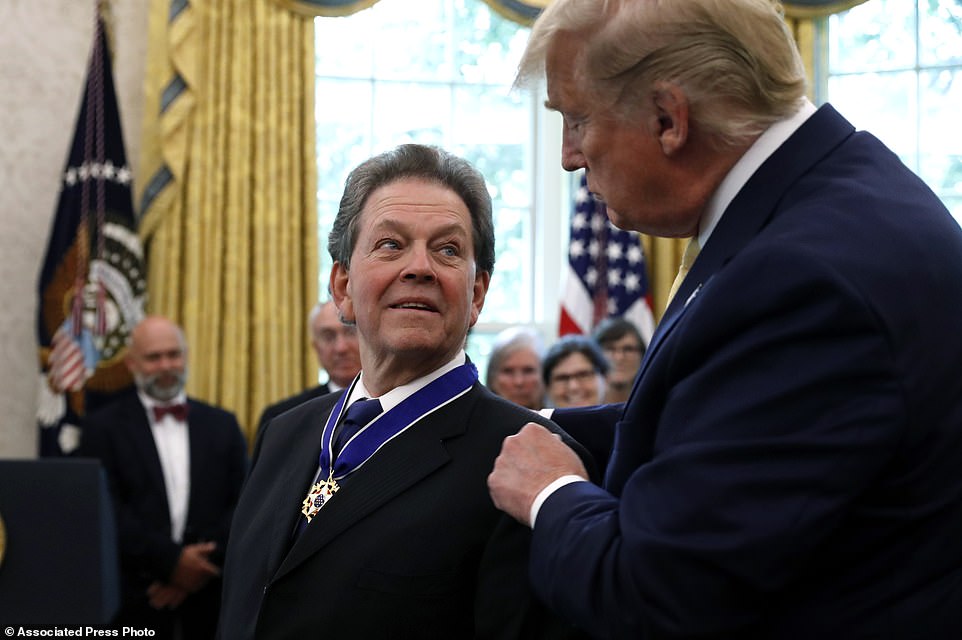 Trump used the ceremony to highlight the state of the economy under his watch. The president credits his $1.5 trillion tax cut package for boosting the economy, which sported a 3.6 percent unemployment rate in May and has U.S. stock markets standing near record highs 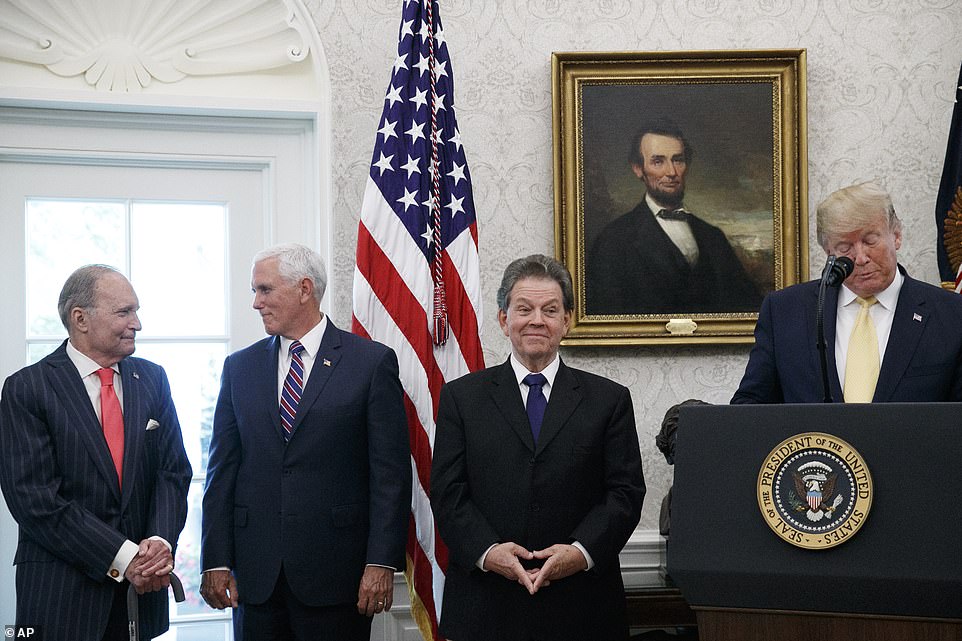 Many Republicans justified their vote for the tax cuts by saying they would grow the economy to the extent that they would not increase the national debt.

Jared Bernstein, who served as an economic adviser to Vice President Joe Biden, said Laffer is probably the most influential economist living today. He said his biggest accomplishment is convincing politicians that tax cuts will pay for themselves.

'He had consistently espoused that tax cuts for the wealthy will generate significant growth, thereby helping pay for themselves and boosting the incomes of low and middle-income people. None of that has occurred,' said Bernstein, now a senior fellow at the Center on Budget and Policy Priorities, a liberal think tank.

Laffer was also an adviser to President Ronald Reagan. He is sometimes referred to as the 'father of supply-side economics' and his philosophy on taxes became known as 'The Laffer Curve.' He said he did not invent the Laffer Curve and quoted economist John Maynard Keynes in summarizing it. 'Given sufficient time to gather the fruit, a reduction of taxation will run a better chance than an increase of balancing the budget.' 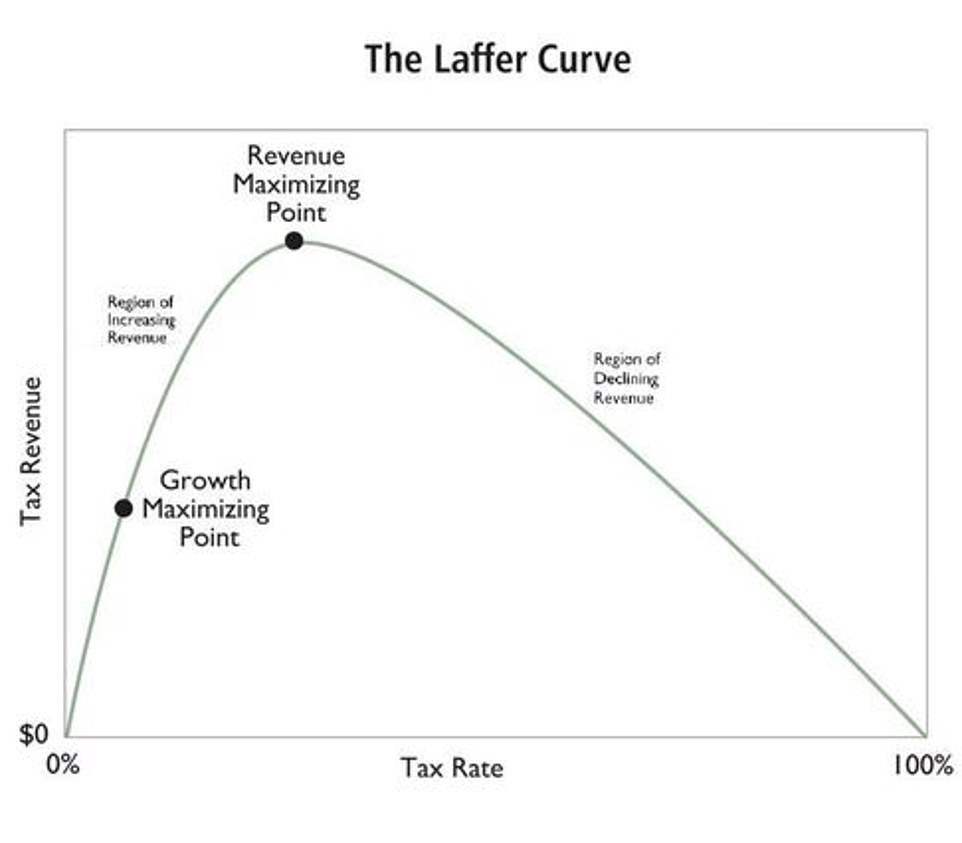 The Laffer curve is a key piece of Republic free market economic policy that argues keeping taxes lower than the Revenue Maximising Point provides greater returns for economic growth. Democratics argue this policy holds tax rates too low and reduces government revenues which could be used to invest in better public services

Trump recounted how The Laffer Curve came into being during a 1974 dinner with Dick Cheney, Donald Rumsfeld and Wall Street Journal reporter Jude Wanniski.

'Art drew on his napkin a series of lines and a curve that changed history,' Trump said. 'Art showed that if tax rates are too high, people stop spending and they stop investing. The result is less growth and lower tax revenue. On the other hand, at a certain point in the curve, lower tax rates spur investment, economic growth and raise government revenue.'

Laffer also advised then-Gov. Sam Brownback of Kansas on income tax cuts that state's conservative legislature approved in 2012 and 2013. But the economic boom envisioned did not pan out. Rather, persistent shortfalls prompted lawmakers to raise the state's sales tax, divert funds from highway projects, reduce contributions to public pensions and tighten spending on social services. 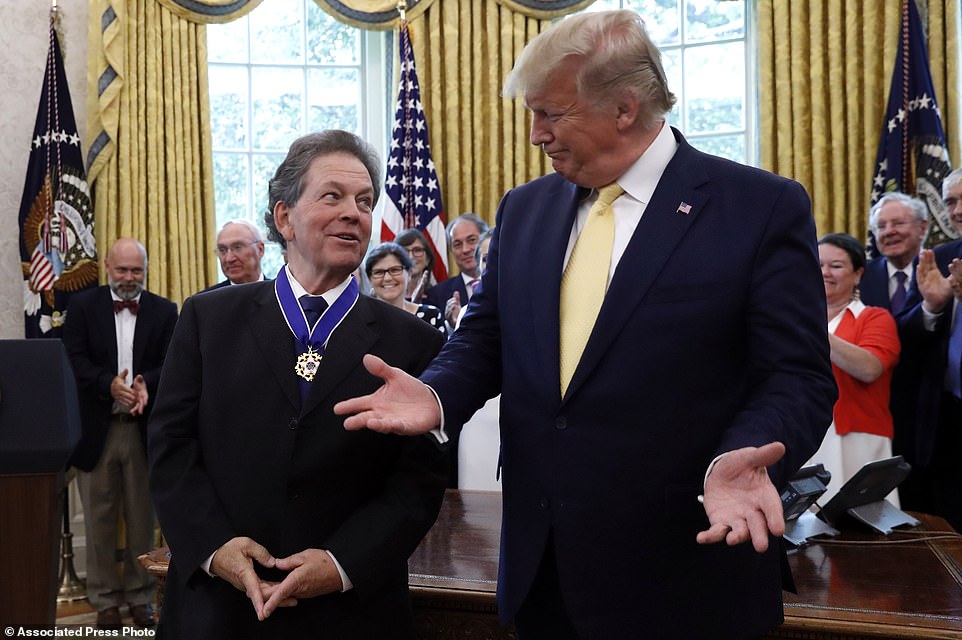 Voters came to view the Republican governor's experiment as a failure, and bipartisan supermajorities repealed most of the tax cuts in 2017 over Brownback's veto.

'Trumponomcs,' whose co-author is Stephen Moore, describes Trump as a 'gifted orator,' ''shrewd,' and 'open-minded.' Writing in Foreign Affairs, a former economic adviser to President George W. Bush described 'Trumponomics' as the voice of 'rah-rah partisans.'

Trump considered nominating Moore to the Federal Reserve's Board of Governors, but Moore withdrew from consideration last month after losing Republican support in the Senate, largely over his past inflammatory writings about women. 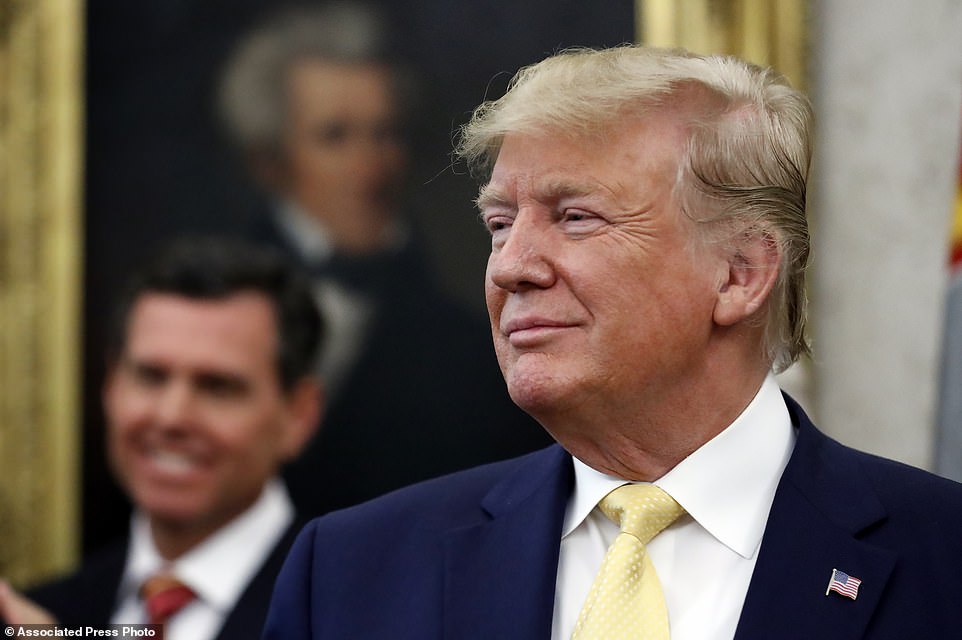 President Donald Trump listens before awarding the Presidential Medal of Freedom to economist Arthur Laffer, Wednesday June 19, 2019, in the Oval Office of the White House in Washington

Moore described Laffer as the most persuasive voice among Trump's advisers for cutting the corporate tax rate to 21 percent.

'Though the final verdict of how well this works remains unknown, the bump in growth and wages in our country, along with the record 7 million unfilled jobs, has provided vindication of the power of the Laffer model,' Moore wrote in The Hill.

The Presidential Medal of Freedom is the nation's highest civilian honor, awarded for especially meritorious contributions to the security or national interest of the U.S., or for significant cultural endeavors.

The buildings in Greenland are colour-coded according to their purpose

Adrian McCallum 'took own life' after trying to save girl...

Police are called to flat Boris Johnson shares with Carrie...