US President Donald Trump has completed his course of treatment for Covid-19 and can return to public engagements this weekend, his physici 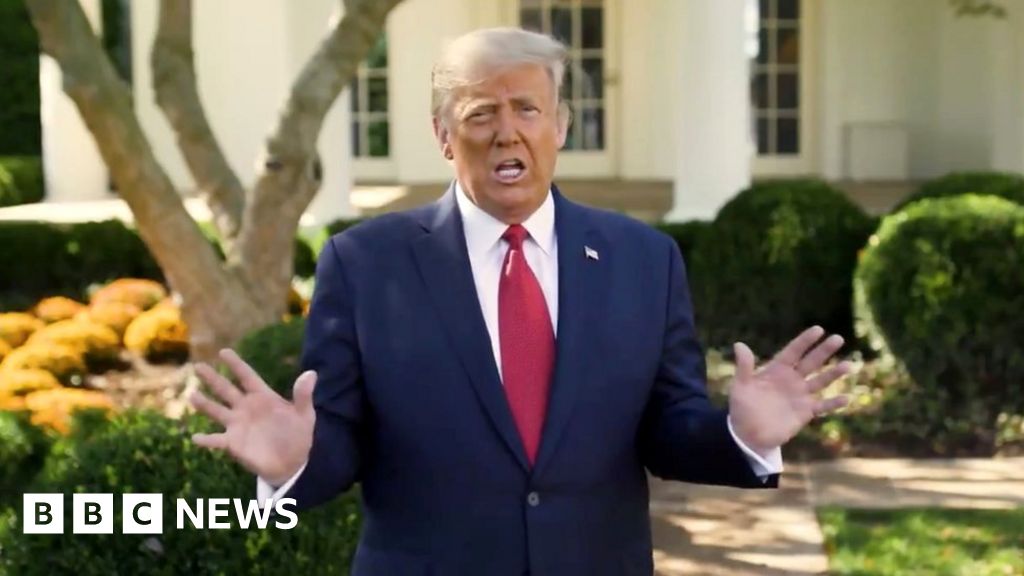 US President Donald Trump has completed his course of treatment for Covid-19 and can return to public engagements this weekend, his physician has said.

Dr Sean Conley said the president had responded "extremely well" to medication and had "remained stable".

Mr Trump later said he would probably take another Covid test on Friday and hoped to hold a rally over the weekend.

Critics have accused the White House of avoiding questions about Mr Trump's health and testing in recent days.

A White House spokeswoman said the president wanted to return to the campaign trail this weekend.

But an administration official later said Trump was unlikely to travel so soon because the logistics of organising events at short notice was problematic. An appearance is more likely on Monday, they said.

The president is also set to have a televised "medical evaluation" on Fox News on Friday evening.

Meanwhile, House Speaker Nancy Pelosi, the most powerful Democrat in Washington, on Friday announced legislation to establish a commission to assess a president's fitness for office.

Mrs Pelosi said it was not meant to rule on Mr Trump's condition, but any serious consideration of the measure is unlikely.

What's this commission about?

Democrats are focusing on a clause in the 25th Amendment that allows a president to be removed from office against their will because of a physical or mental incapacity.

The amendment was introduced after the 1963 assassination of President John F Kennedy to clarify issues around the transfer of presidential powers. It can only be invoked if the vice-president and a majority of cabinet secretaries or Congress agree.

Democrats are looking to set up mechanisms that would enable Congress to have more say on a president's fitness.

Conservatives say this is a political move to attack Mr Trump's health ahead of the election.

On Friday, Mrs Pelosi said the move was "not about President Trump", who "will face the judgment of the voters".

"This legislation applies to future presidents but we are reminded of the necessity of action by the health of the current president."

Previewing the legislation on Thursday, Mrs Pelosi told reporters that serious questions concerning Mr Trump's health were still unanswered, and described the president as being in an "altered state".

Mr Trump called Ms Pelosi "crazy" and said she was "the one who should be under observation".

What's the latest on Trump's health?

Speaking on Fox News late on Thursday, Mr Trump said he was feeling "really good" and hoped to hold a campaign rally on Saturday evening, possibly in Florida.

The president was also heard clearing his throat and coughing during the interview. At one point, he appeared to mute his mic after needing to clear his throat.

Fox News has since said that Mr Trump will appear for a televised "medical evaluation" on Friday at 20:00ET (01:00BST). It will be his first on-camera interview since his diagnosis and he will undergo an evaluation by Dr Mark Siegel, a Fox contributor.

Earlier this week, White House doctor Dr Conley had said that if the president's condition remained the same or improved throughout the weekend and into Monday, "we will all take that final, deep sigh of relief".

Although the names of many people who have interacted with the president and tested positive are now known, it remains unclear just how many were exposed at the White House. New Covid safety measures are in place there.

One of the top Republicans, Senate majority leader Mitch McConnell, said on Thursday that he had not been to the White House since 6 August because its approach to handling Covid with social distancing and masks was "different from mine and what I suggested we do in the Senate".

Why the focus on Trump's testing?

The Centers for Disease Control (CDC) recommends self-isolating for 10 days after a positive test. The CDC also says isolation could end earlier after "two negative test results in a row, from tests done at least 24 hours apart".

Questions remain about when the president first became infected and whether he could still be contagious.

In a memo released by the White House on Thursday evening, Dr Conley said Mr Trump was displaying no signs "to suggest progression of illness".

"Saturday will be day 10 since [last] Thursday's diagnosis, and based on the trajectory of advanced diagnostics the team has been conducting, I fully anticipate the president's safe return to public engagements at that time," the memo added.

Mr Trump avoided questions while speaking to Fox News on Thursday about whether he had been tested recently, but said he would probably be tested on Friday.

We know Mr Trump tested positive for Covid-19 last Thursday night, according to his doctors. We do not know when his last negative test was, however. On Monday, Dr Conley also avoided questions about it.

As a result, some have wondered whether the president was getting regularly tested at all.

How does this fit into the election?

The questions come amid a row over the next presidential debates between Mr Trump and challenger Joe Biden. The Trump campaign has rejected the debate commission's plan of a virtual debate next week, saying there is no medical reason to avoid an in-person event.

The US election will be held on 3 November.

Latest opinion polls suggest that Mr Biden's lead has increased since the chaotic first debate and the president's coronavirus diagnosis.

Six million ballots have already been cast in early voting.

Pentagon to brief on response to Russian missile system...

Another Spanish painting is botched by restoration

China says Twitter should shut down accounts that smear...

Pensioner, 71, who's forced to carry on working after fraudsters posing as his bank...

Man who donated his mother's bod

South Africa is currently experiencing a surge in coronavirus cases – the latest...

Bill Gates does not think FDA can be trusted with COVID-19...

Bill Gates does not think the FDA can be trusted with COVID-19 vaccines and he says...

Grab the menthol chest balm and rehydration tabs! As fears of a second lockdown...

The FBI has launched an investigation after hackers hijacked Twitter accounts of...

Why the secret to weight loss is having an organised PANTRY

Sports teacher, 43, reveals why the secret to lasting weight loss is having an organised...