There is no such thing as being 'too clean', health officials say

There is no such thing as being

There is no such thing as being 'TOO clean': Public health officials call for an end to the '90s 'myth' that puts us at risk of Listeria, E.coli and the norovirus

The idea that being 'too clean' is bad for your health is a myth, health officials have claimed.

The Royal Society for Public Health (RSPH) agrees we should 'build up our immune systems' and 'ward off allergies' by encountering germs' in the great outdoors.

However, the body stresses this should not interfere with good hygiene at home.

It released a report that revealed nearly one in four (23 per cent) people dismiss a hygienic home as being 'unimportant'.

The experts now fear the public has 'got the wrong end of the stick' when it comes to keeping a clean house.

They stress a spick and span abode is 'vitally important' for preventing infections such as Listeria, E.coli and the norovirus.

The RSPH said people should worry less about cleaning floors, walls and furniture, and concentrate more on surfaces and food preparation. 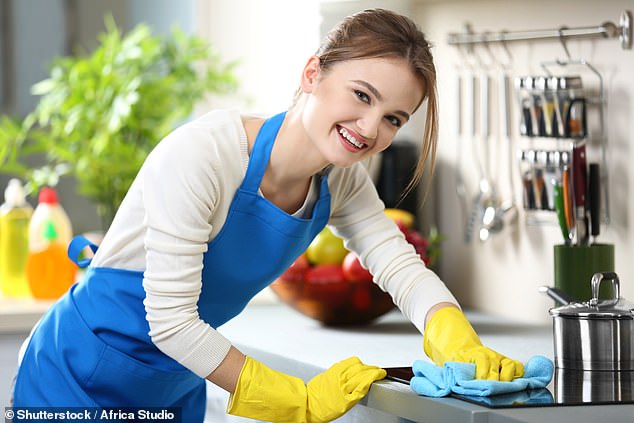 The idea that being 'too clean' is bad for our health is a myth, health officials claim (stock)

Professor Lisa Ackerley, a food-hygiene expert and RSPH trustee, said: 'Getting outdoors and playing with friends, family and pets is great for exposure to 'good bacteria' and building a healthy microbiome.

'But it's also crucial the public don't get the wrong end of the stick - this doesn't need to get in the way of good hygiene.'

'Good hygiene in the home and everyday life helps to reduce infections, is vitally important to protecting our children and reducing pressure on the NHS,' she added.

Professor Ackerley also said that it also has a 'huge role to play in the battle against antibiotic resistance'.

The 'hygiene hypothesis', which took off in the late 1980s, suggests 'overcleanliness' is to blame for rising rates of allergies, the RSPH said.

But the recommendation that children be exposed to a range of harmful pathogens to 'make them stronger' has now been refuted.

Professor Sally Bloomfield, of the London School of Hygiene and Tropical Medicine, said: 'The problem is we have become confused about what hygiene is and how it differs from cleanliness.

'Whereas cleaning means removing dirt and microbes, hygiene means cleaning in the places and times that matter - in the right way - to break the chain of infection whilst preparing food, using the toilet, caring for pets etc.'

The RSPH agrees people should be exposed to a range of 'harmless' microbes, such as those children encounter while playing outside.

It claims 'sheltering' youngsters indoors, along with antibiotics, has prevented them being exposed to the 'immune-strengthening' bugs they need.

However, harmful pathogens should always be avoided, the RSPH added in its Too Clean or Not Too Clean report.

The body is instead calling on people to adopt a 'targeted-hygiene' approach.

The approach includes cleaning surfaces, utensils and hands thoroughly both during and after food preparation, particularly when handling raw meat.

People should also wash their hands with soap and water before they eat with their fingers, after using the toilet, and after coughing, sneezing or blowing their noses.

THE EIGHT 'MOST CRUCIAL' TIMES TO PRACTICE GOOD HAND WASHING

The Royal Society for Public Health recommends people wash their hands with soap and water after they come into contact with potentially-harmful microbes.

It lists the eight 'most crucial' times to adopt these habits as being after we:

And hands should be washed after handling or laundering dirty clothes, bedding or towels.

Good hand washing is also essential after playing with, or feeding, pets, as well as when clearing up animals' waste.

And we should be cautious after putting out bin bags, or caring for a loved one who has been vomiting or suffering from diarrhoea.

'Targeted hygiene undertaken at the crucial times and places is a way of preventing infection that is cheap on time and low effort,' Professor Ackerley said.

She added that it still exposes you to all the "good bacteria" your body benefits from.

'Targeted hygiene offers a lifestyle which maximises protection at times when we risk exposure to harmful microbes', Professor Bloomfield said.

'But at the same time maximises ongoing interaction with microbial friends from human, animal and natural environments.'

An accompanying survey to the RSPH report found almost one in four (23 per cent) people agreed 'hygiene in the home is not important because children need to be exposed to harmful germs to build their immune system'.

And more than half mistakenly thought keeping homes too clean was damaging.

'This is a potentially harmful belief which could lead to children being exposed unnecessarily to harmful or even life-threatening infections,' the RSPH report said.

The survey also revealed 'substantial public confusion' about the relationship between cleanliness and hygiene.

Some 61 per cent of those polled believed dirty hands from playing outdoors could spread harmful germs.

This is despite there being little evidence that outdoor dirt carries harmful microbes.

Some 36 per cent also mistakenly believed dirt is usually or always harmful.

And 55 per cent blamed a 'too clean' house on children failing to come into contact with harmless bugs that build up their immune systems.

The poll also found 22 per cent of people never wash and dry dish cloths between use, and almost one in three (32 per cent) mistakenly believed this was a low-risk habit.

Men were worse offenders than women, with 16 per cent of the males surveyed thinking there was no or low risk with not washing hands with soap after using the toilet.

This is compared to just seven per cent of the female participants.

And nearly twice as many men as women (eight versus four per cent) saw no harm in not washing their hands properly after handling raw meat.

Earlier this month it emerged five patients across England died after eating sandwiches that were contaminated with the deadly-bacteria Listeria.

These patients made up nine cases that were confirmed at eight NHS trusts.

WHAT IS THE HYGIENE HYPOTHESIS?

The hygiene hypothesis encourages parents to 'let their children play in dirt' in order to strengthen their immune systems and ward off allergies.

The theory came about after the epidemiologist Dr David Strachan observed children who live in large households were less likely to develop hay fever.

Dr Strachan, of St George's University of London, put this down to the youngsters being exposed to germs via their older siblings.

This led to research that suggested children are less at risk of conditions like asthma if they had pets or grew up on a farm.

The immune system is thought to become stronger if we 'train it' to fight off everyday pathogens.

In contrast, being 'too clean' prevents a child's immune system being stimulated or challenged.

The theory has been tested in rodents that were raised in sterile environments and then exposed to a low dose of an infectious agent that would not normally harm other animals.

These germ-free mice and rats often became infected quickly and usually died as a result.

When examined post-mortem, their bodies revealed a slowed immune response.

But when mice that were similarly raised in sterile environments were slowly introduced to these bacteria, their immune responses were much better.

Mother banned from having visitors hits back at neighbours