The robotic arm controlled by yo

An incredible video has revealed a mind-controlled robotic arm which is the first of its kind to work without surgical brain implants.

Researchers have filmed someone using the robot arm to follow a white spot around a computer screen while controlling it with pads on the outside of their head.

In the past the technology has only worked when connected to sensors inside the skull with direct connections to the brain, the scientists said.

But a new non-invasive way of connecting the mind to extra limbs could pave the way for pioneering technology to help paralysed people and amputees.

Developments have made the arm controllable using pads placed on the outside of the head and its movement is now smooth and continuous. 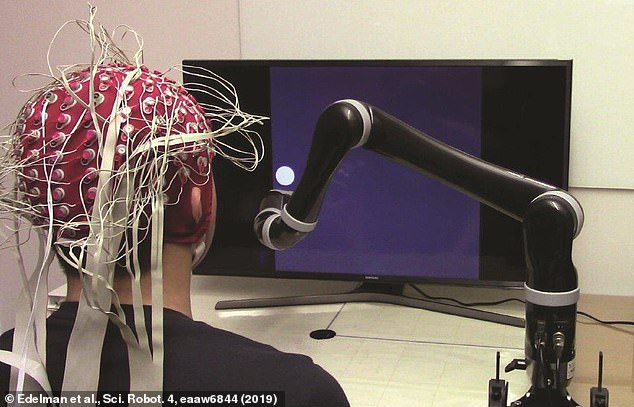 In the video a person can be seen controlling the robot arm with their mind and using it to follow a white circle around the computer screen with a continuous, fluid motion

Researchers at the Carnegie Mellon University in Pittsburgh and the University of Minnesota said the breakthrough was a step towards the 'ultimate goal'.

Surgical implants can already accurately translate electrical signals in the brain into commands to make an electronic device move.

But hooking them up is a complicated process which takes extremely skilled staff performing expensive and risky brain surgery.

The new technology, however, can measure brain signals with electrodes placed on the outside of the head to interpret someone's intended movement.

Although in the video it doesn't appear to be perfectly accurate the researchers were focused on how fluid and free from disruption the arm's movement was.

'There have been major advances in mind controlled robotic devices using brain implants,' said Professor Bin He, from Carnegie Mellon.

'It's excellent science but non-invasive is the ultimate goal.

'Advances in neural decoding and the practical utility of non-invasive robotic arm control will have major implications on the eventual development of non-invasive neurorobotics.'

WHAT IS EEG TECHNOLOGY?

An electroencephalogram (EEG) is a recording of brain activity which was originally developed for clinical use.

During the test, small sensors are attached to the scalp to pick up the electrical signals produced when brain cells send messages to each other.

In the medical community these signals are recorded by a machine and analysed by specialist doctors to determine whether they're unusual.

An EEG can be used to help diagnose and monitor a number of conditions that affect the brain and find the cause of symptoms such as seizures or memory problems.

This has led to the creation and design of a number of futuristic sounding gadgets.

These have ranged from a machine that can decipher words from brainwaves without them being spoken to a headband design that would let computer users open apps using the power of thought.

The technology is called electroencephalography (EEG) and works by watching for electrical impulses in the brain.

Sensors placed on the head measure where the brain signals are to work out what movement they are trying to control, and are then fed into a computer which creates its own signals to control the robotic arm.

One of the main barriers to using this non-invasive signal sensing – which has to work through hair, skin and bone – is that impulses are fainter and more difficult to read.

Signals which are badly interpreted had led to jerky and uncontrolled movements of the arms, but the US researchers say they have overcome this.

They said in tests done on 68 people who did up to 10 sessions each, the control of the arm had become smooth and continuous.

Professor He and his team said their technology could be directly applied to patients such as those paralysed by injury or illness.

And they plan to do clinical trials soon.

Professor He added: 'Despite technical challenges using non-invasive signals, we are fully committed to bringing this safe and economic technology to people who can benefit from it.

'This work represents an important step in non-invasive brain-computer interfaces, a technology which someday may become a pervasive assistive technology aiding everyone, like smartphones.'

The research was published in the journal Science Robotics.

Tiger Mums are so over, says ESTHER WOJCICKI