Tesla has halted the use of Bitcoin to pay for its vehicles because of the environmental impact of using the currency. Bitcoin is created when high-powered computers compete against other machines to

Tesla has halted the use of Bitcoin to pay for its vehicles because of the environmental impact of using the currency.

Bitcoin is created when high-powered computers compete against other machines to solve complex mathematical puzzles, a process known as mining, an energy-intensive activity that currently often relies on electricity generated with fossil fuels, particularly coal.

At current rates, such Bitcoin mining uses about the same amount of energy annually as the Netherlands did in 2019, according to data from the University of Cambridge and the International Energy Agency.

In a tweet, Tesla Chief Executive Officer Elon Musk said the company would not sell any Bitcoin, and intends to use Bitcoin for transactions as soon as mining transitions to more sustainable energy.

"We are also looking at other cryptocurrencies that use less than one percent of Bitcoin's energy/transaction."

He added: "Cryptocurrency is a good idea on many levels and we believe it has a promising future, but this cannot come at great cost to the environment."

It was only in March that Musk announced customers could buy its electric vehicles with Bitcoin.

And in February the car company announced that it had invested $1.5bn (£1.09bn) in the notoriously volatile cryptocurrency, pushing the value of a single Bitcoin to just over £41,000 - up from the £5,600 it was worth 12 months before.

News of the suspension of Bitcoin as a method of payment for Tesla vehicles knocked around 7% off the currency's value, down to around £37,460 per unit. 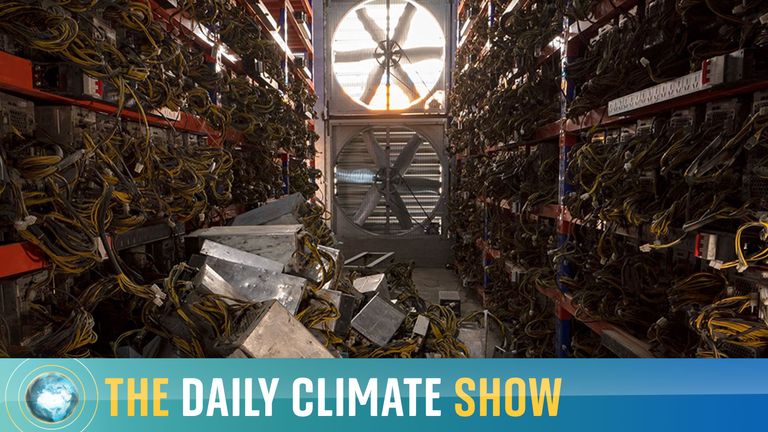 The Daily Climate Show is broadcast at 6.30pm and 9.30pm Monday to Friday on Sky News, the Sky News website and app, on YouTube and Twitter.

Hosted by Anna Jones, it will follow Sky News correspondents as they investigate how global warming is changing our landscape and how we all live our lives.

The show will also highlight solutions to the crisis and show how small changes can make a big difference.

A sovereign and free to run for presidency? The possibilities...

The lack of social distancing and mask wearing is proof of "compassion fatigue",...