St Paul's Cathedral is evacuated due to gas leak

St Paul's Cathedral is evacuated due to gas leak as 250 staff and visitors from church and nearby businesses are told to leave while 80ft cordon is set upBy Mark Duell for MailOnline Published: 16:2

By Mark Duell for MailOnline

St Paul's Cathedral was evacuated this afternoon following a gas leak with 50 people told to leave and another 200 ordered out of surrounding buildings.

London Fire Brigade crews were called to reports of a gas main leaking into a basement at a restaurant and office block on St Paul's Churchyard.

Two fire engines, two fire rescue units and support vehicles were sent to the scene after the bridade was called at 1.20pm, and an 80ft (25m) cordon was set up.

The leak meant Thameslink trains were not stopping at City Thameslink station, while Underground trains were going straight through St Paul's station this afternoon. 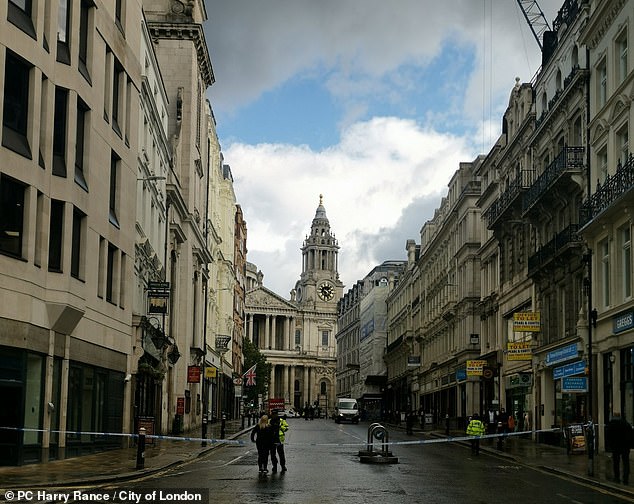 City of London Police initially said St Paul's Churchyard and Creed Lane were closed in both directions, before a further series of wider closures was put in place.

A police spokesman said: 'These closures will be in place for some time. Please find alternative routes where possible.'

PC Harry Rance tweeted a picture of a cordoned-off Ludgate Hill, saying: 'Many roads around St Paul's are closed due to a gas leak. Please avoid the area.'

The LFB said: 'Firefighters have been called to reports of a gas leak at a restaurant and office block on St Paul's Churchyard. A gas main is leaking into a basement.

'A 25-metre cordon is in place as a precaution. The Brigade was called at 1.20pm. Two fire engines, two fire rescue units and support vehicles are at the scene.

The Cathedral is closed for sightseeing and services for the remainder of today, October 6. City of London Police and the London Fire Brigade are at the scene.

'Ticket holders for October 6 can use their ticket any day this week until October 10 or reschedule their ticket for a later date.'

Would YOU stop eating meat to support a vegan or vegetarian partner?

Autistic boy's family in shock after note over disabled...

Princess Anne is praised by viewers for her strong work...

Carrie Symonds will not have taxpayer-funded office in...

Jeremiah "Jerry" Harris, one of the stars of the Netflix documentary series Cheer,...

Working lunches could be EXEMPT from Tier 2 and Tier 3...

Working lunches of up to 30 PEOPLE could be EXEMPT from Tier 2 and Tier 3 lockdowns...

How Trump-Biden debate descended into the gutter and never...

From 'how you doing, man' to 'keep yapping' - how Trump and Biden's debate descended...

Boris Johnson smashes record for most money raised by UK...

The eye-poppingly promiscuous antics of the artist Duncan...