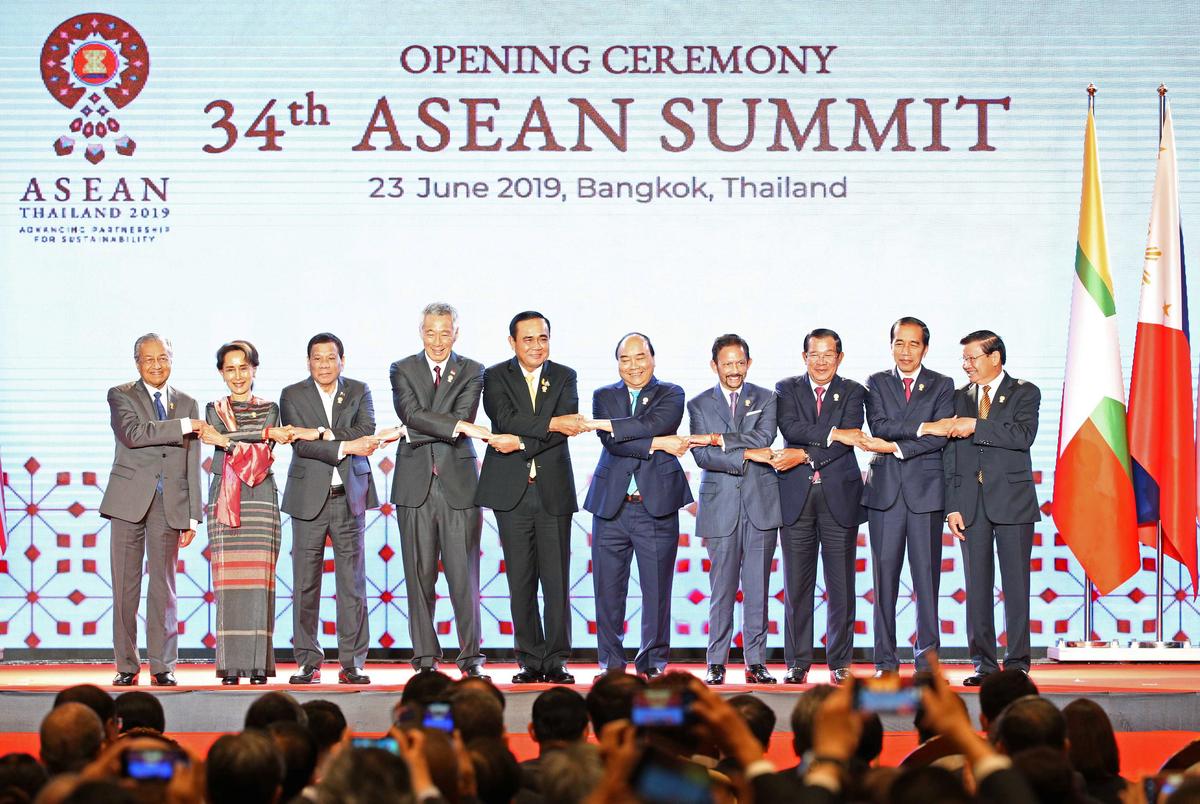 BANGKOK (Reuters) - Southeast Asian leaders agreed on Sunday to work together on regional economy and security to strengthen their positions amid growing U.S.-China tensions, as they wrapped up this year’s first summit in Bangkok.

“This will help ASEAN handle the changes and uncertainty that will happen in the region going forward, particularly the impacts of trade tension between ASEAN’s important trade partners.”

Negotiations began in 2012 on RCEP, which envisions the creation of a free trade zone encompassing 45% of the world’s population and more than a third of its GDP, but does not involve the United States.

“If we can do this, we will have the bargaining power and base for negotiation. Because when combined, we are 650 million people, the largest regional bloc in the world,” the Thai prime minister said.

ASEAN countries also agreed on a common approach on a U.S.-led Indo-Pacific initiative, at a time when U.S.-China tensions were rising and forcing ASEAN countries to take sides.

Prayuth hailed the bloc’s agreement on the ASEAN Outlook on the Indo-Pacific as a “significant step” for the region.

The endorsed outlook document, seen by Reuters, acknowledges “maritime issues such as unresolved maritime disputes that have the potential for open conflict” as existing and emerging geopolitical challenges.

It outlines maritime cooperation “for peaceful settlement of disputes”. It also aims for connectivity in the Indo-Pacific region.

Prayuth’s speech made no mentions of major issues such as the plight of Myanmar’s fleeing Rohingyas and the South China Sea dispute.

Rights groups have called on ASEAN to rethink support for plans to repatriate Rohingya Muslims who have fled member state Myanmar, where activists say returnees could face discrimination and persecution.

More than 700,000 Rohingya crossed into Bangladesh in 2017, according to U.N. agencies, after a crackdown by Myanmar’s military sparked by Rohingya insurgent attacks on security forces.

“Developments in Myanmar ... is providing a litmus test for ASEAN’s capacity to manage developments in one of its member states that have wider ramifications for the region and, indeed, beyond,” said Marty Natalegawa, a former Indonesian foreign minister.

Malaysia’s foreign minister Saifuddin Abdullah called on Saturday for perpetrators of massacres and atrocities against the Rohingya to be “brought to justice” and said the repatriation process “must include the citizenship of the Rohingyas”.

Formed more than 50 years ago, ASEAN has historically struggled with challenges facing the region because it works only by consensus and is reluctant to become involved in any matter regarded as internal to a member state.

The South China Sea is one of the world’s busiest waterways, and a potential flashpoint in the region as several ASEAN members - the Philippines, Vietnam, Malaysia, Brunei and Indonesia - as well as China and Taiwan have conflicting territorial claims.

ASEAN likely will finish a first reading of a Code of Conduct negotiating draft for the disputed South China Sea by the end of this year, Thailand said on Saturday, adding that the final reading is expected by the end of 2021.

U.S. plan will not lure Lebanon into settling Palestinians:...

Trump says did not send message to Tehran warning of attack

Turkey could face consequences if it doesn't change tack,...