Paranoid schizophrenic who shoved ex-Eurotunnel boss, 91, onto Tube tracks because he 'looked old' is jailed for life 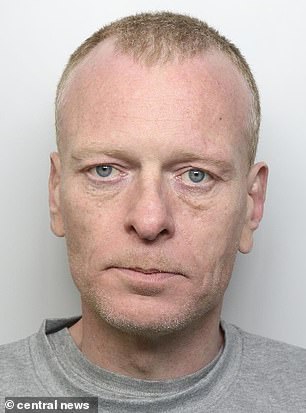 Paul Crossley has been jailed for life and ordered to serve a minimum of 12 years after pushing Sir Robert Malpas, 90, onto the Tube tracks at Marble Arch station in London

A paranoid schizophrenic who shoved a former Eurotunnel boss onto Tube tracks moment after trying to kill another commuter has been jailed for life.

He was saved by heroic Frenchman Riyad El Hussani, 24, who burned his hand on the electrified track as he hauled the engineer to safety.

Crack cocaine addict Crossley claimed he was merely trying to push Sir Robert 'onto the floor' and said he shoved Mr French 'to scare him' because he gave him a 'funny look'.

But Benjamin Aina, QC, prosecuting, said Crossley was out looking for someone to push in front of a train and leapt at Sir Robert because he was 'annoyed' by the failed attempt on Mr French.

An Old Bailey jury convicted Crossley of two charges of attempted murder back after a trial last October last year.

But his sentencing was delayed for eight months while detailed psychiatric reports were prepared. 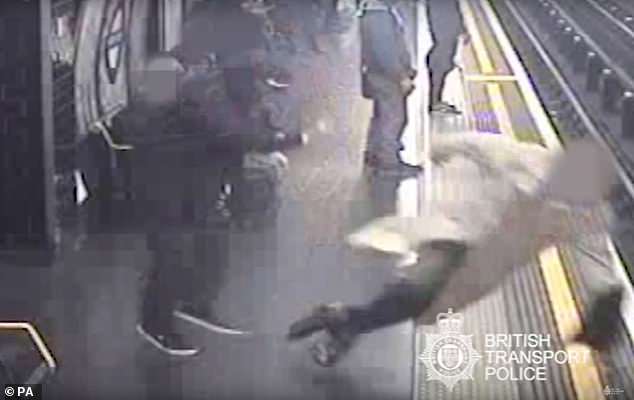 Shocking CCTV shows the moment Sir Robert Malpas, 91, was shoved onto the tracks of the London Underground by Paul Crossley 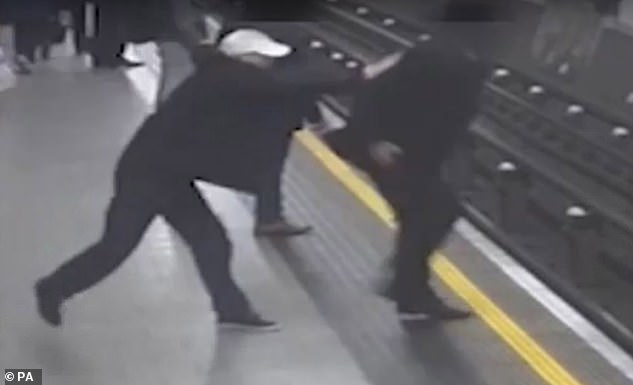 Not long before, Crossley was caught on camera attempting to push another victim, Tobias French, on to the tracks at Tottenham Court Road

Dr Anneka John-Kamen said Crossley had exhibited symptoms of psychosis including attributing significant meaning to things heard on the TV or radio, thought broadcasting and feelings of paranoia.

Crossley has a history of hearing things on the radio or television and then smashing the device up, she said.

Dr John-Kamen told the court Crossley interpreted the Pet Shop Boys hit West End Girls as 'a message for him', adding: 'Yesterday, he said it sent him to the West End.

'Previously, he said the song was on and he thought 'I am going to the West End'.'

But Crossley never once reported hearing the song to police or the jury during his subsequent trial.

One of Crossley's victims, former Eurotunnel boss, Sir Robert Malpas, 91, is pictured outside the Old Bailey this morning

Mr Aina suggested he simply 'cottoned on' to the idea of the song playing a part in the attacks after being asked about it by the psychiatrist.

Crossley had also told a probation officer he 'targeted Sir Robert Malpas because he looked older and less likely to be able to withstand his attack' in contrast to 'being controlled or influenced by a song that he'd heard'.

The Recorder of London, Judge Nicholas Hilliard QC, told Crossley: 'It was beyond doubt that you were reducing the efficacy of your medication because of the drugs you were taking.

'At trial you said that by April 2018 you were using crack cocaine.

'You said you were experiencing a bad comedown on the 27th.

'You said in evidence that taking crack cocaine can make your schizophrenia worse and that it was not a good idea for you to take it.'

Judge Hilliard said that he was satisfied that Crossley's paranoia could be described as anxiety, and that paranoia was also a symptom of crack cocaine.

He told him:' You may seek to present symptoms as an excuse.'

The judge dismissed the significance of the song 'West End Girls'.

He said: 'I think the song simply put the idea of going to a place in your head as can happen to any of us.'

He told the Crossley that in his view paranoid schizophrenia was not the driving force behind the attacks but drug abuse and his natural tendency towards aggression.

He said: 'I am satisfied that paranoid schizophrenia was not the driving force, but drug abuse, and your natural tendency to aggression.

'In my judgment your culpability for this offence remains high such that punishment is necessary and a hospital order would not be suitable.

'You present a grave and enduring risk to the public. There is absolutely no saying when that risk may dissipate.' 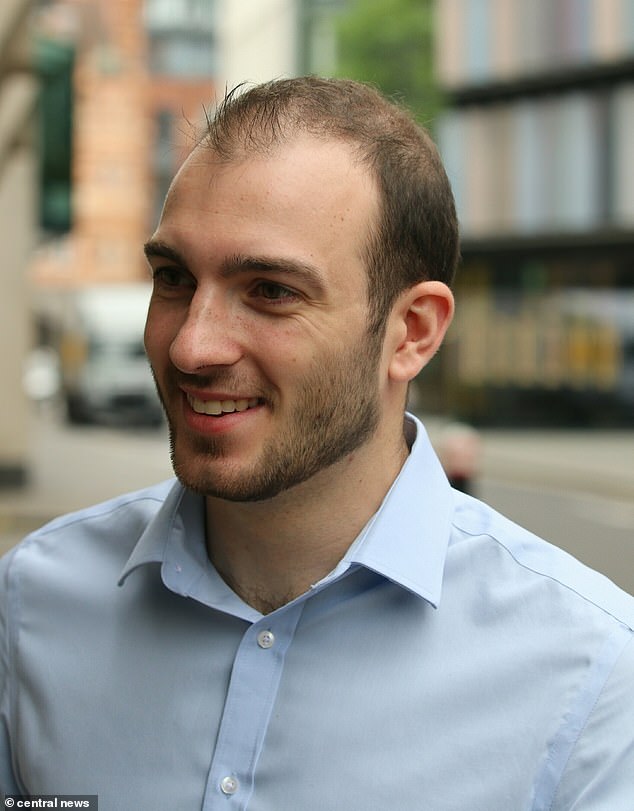 Tobias French, 23, (pictured outside the Old Bailey this morning) nearly fell victim to Crossley, but he managed to keep his balance

He jailed Crossley for life and ordered he serve at least 12 years before he can be released on parole.

Crossley will be detained at a secure mental health facility, the John Howard Centre and if his health improves he will be admitted to prison to serve his sentence.

The judge had earlier commended Mr El Hussani for his 'exceptional bravery with a complete disregard for his own safety in saving Sir Robert'.

Sir Robert spent a week in hospital after suffered skull lacerations and multiple fractures to his right pelvis.

Mr Aina had told the court: 'Physically he has recovered completely.

'I choose my words carefully because, obviously, the psychological effect is likely to remain for obvious reasons.'

'He pushed Tobias French towards the train tracks as a Central Line train was approaching.

'The train was about 10 meters away.

'Mr French was fortunate in that he was able to resist the defendant's actions and prevent himself from falling onto the tracks.

'Mr Crossley then caught a train to Marble Arch station where he pushed Sir Robert Malpas onto the train tracks causing him to suffer a fractured pelvis and a nasty wound to his head which required 12 stitches.

'Sir Robert Malpas was 90 years old at the time.

'While Sir Robert Malpas was in the pit below the tracks he was bravely assisted by a member of the public, Riyad El Hussani, who jumped down onto the tracks to assist Sir Robert back on to the platform along with other members of the public.

'Mr El Hussani received a burn as he touched the electrified rail but, again, fortunately he has recovered from his physical injury.

'Members of the public were also bravely involved in the apprehension and detention of Mr Crossley at Marble Arch station.

'When asked for an explanation for his actions by police in a formal interview held the next day, 28 April, Mr Crossley simply said 'I had no sleep'.

'During the trial he stated in evidence that he was diagnosed with paranoid schizophrenia when 17 years old.

'He was supposed to be taking medication for his mental illness but had not taken medication on 27 April.

'He had been using crack cocaine the day before the incident. He was later to put a figure on that of around £600 worth of crack cocaine.

'On 27 April he was having a day out in the West End. When he was on the platform, he began to hear voices and was getting paranoid.

'He said he pushed Mr French only intending to scare him. When he got to Marble Arch train station, he was having a panic attack.

'He also said he was annoyed because he was having memories of his mother's death because the anniversary was in May, and said he was only intending to push Sir Robert Malpas on to the floor.'

Sir Robert was treated in hospital for a nasty gash to his head, bruising on his face and fractured pelvis.

He was chairman of chemicals giant ICI and materials technology group Cookson.

He had been attending an ICI pensioners' reunion in Marble Arch on the night of the incident.

Sir Robert said in a statement read to jurors: 'As I was walking along the platform, I felt a two-handed push to my back and felt myself falling over the tracks and landing on the rails.?

'I may have been concussed but only for a short time. I banged my head on the rails.

'I became aware of a male to my right, the male lifted me by my upper body, I saw him wave up to the platform for others to help him.'

Sir Robert lay in the pit below the electrified track with blood flowing from his head and struggled to get up.

The board signalled just one minute until the next train was due on the platform.

Mr El Hussani recalled in his statement: 'I heard screams and shouting, I then ran 20 metres and saw a male on the tracks.

'I saw lots of people standing around him. It looked like they wanted to help.

'I saw him full of blood, on his knees on his front, I then heard people shouting get up and get out.

'The danger then kicked in. I grabbed the male and pushed him up to the right towards the platform.'

Crossley was in breach of two suspended sentences at the time he tried to kill the two men, the court heard.

In September 2016 he pleaded guilty to sexual assault after he groped a care worker who came into his room to give him his medication.

'She had her back to Mr Crossley when she felt both buttock cheeks being grabbed from behind,' Mr Aina said.

'The victim says that she was initially shocked and paused for a few seconds.

'Her buttocks were held for that period of time until she turned around to confront Mr Crossley who was stood there.

'She challenged him and told him that his behaviour was unacceptable.

'He said he was sorry but giggled at the victim.'

Crossley later said he did it because he thought the woman 'could have had an attraction to him'.

The community order originally imposed was later revoked and Crossley was re-sentenced the following January when he was handed a five-month jail term suspended for two years.

Between those periods he admitted possessing a blade after police found a six-inch kitchen knife hidden inside his jacket near the Stratford shopping centre, opposite Westfield, and given a concurrent two-month suspended sentence.

He was later handed another five-month suspended jail term, this time to run consecutive to the others, at the same hearing last January for racially abusing another care worker who reminded him to attend his probation appointment.

Duke of Westminster's sister is fined £660 and given six points

Matchmaker who might have set up Prince Harry and Meghan...