By Ryan Fahey For Mailonline

A teenager is teaching other Russians how to 'sound like an American' when confronted by police at protests tomorrow against the detention of opposition leader Alexei Navalny.

Law enforcement agencies are preparing to suppress nationwide demonstrations after 44-year-old Navalny urged supporters to flood the streets to protest him being detained on return to Russia.

Navalny, who was charged with flouting the rules of a suspended jail term, was being treated in Berlin for suspected poisoning with the nerve agent novichok. Soon after he roused from his coma, he accused President Vladimir Putin of orchestrating his attempted assassination.

Moscow police today said they would 'immediately suppress' any 'unsanctioned protests' in support of the dissident in the capital tomorrow. Protest coordinators have planned demonstrations in at least 65 other cities. Several Navalny aides have already been arrested.

TikTok user @neurolera, who gives her name as Lera in her bio, posted a video of herself explaining the pronunciation of common American phrases to help protesters if they are apprehended by Russian riot police. 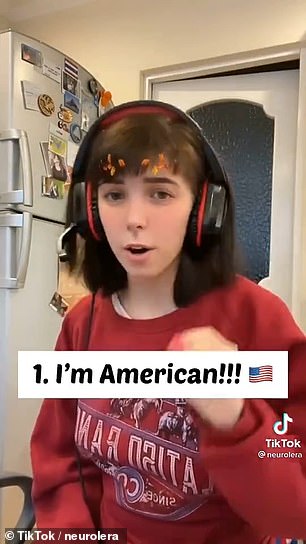 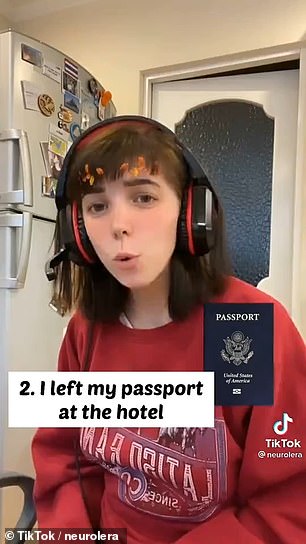 The TikTok user, who calls herself Lera, advises protesters to tell the police at protests tomorrow that they are American and that they left their passport at the hotel

Lera's first tip is to confidently tell the officers, 'I'm American'. She then stresses the tone and intonation for the statement to sound as if it's coming from the lips of a native speaker.

If asked for a passport, Lera advises, protesters should tell the police they left it in their hotel room.

Lera then suggests shouting: 'Your'e violating my human rights!'.  During nationwide protests in 2019, officers were filmed beating and using violence against pro-democracy demonstrators.

Finally, Lera advises demonstrators in trouble to pull out a phone and tell officers they will be getting in touch with their lawyer.

Lera, who has over 680,000 followers on the popular social media app, released the video amid concerns that young people will make up a large number of protesters at tomorrow's rallies.

Teachers, and the Kremlin, have warned schoolchildren against attending. 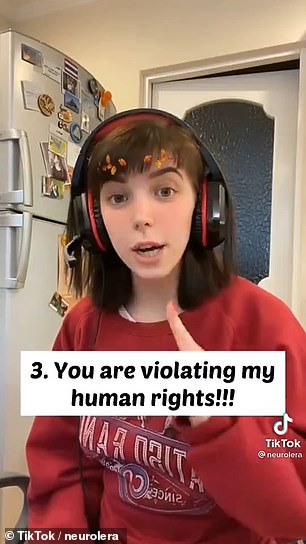 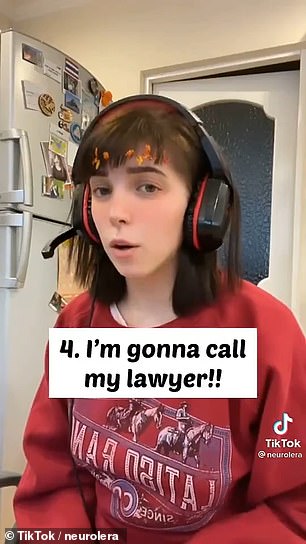 If confronted with violence, Lera advises protesters to tell officers they are 'violating my human rights' and that they're calling their lawyer

Schoolgirl Alina Morozova, thought to be 16 years old from Yaroslavl, a city four miles northeast of Moscow, was interrogated by police after posting a video showing herself taking down a portrait of Putin hanging at the front of her class.

After teachers reported Morozova she was taken to a local police station and interrogated. The teenager, who also posted her video on TikTok, was released after police decided she had committed no crime.

According to Russian law, the portrait of the president is not a state symbol, and therefore not illegal to remove.

In another case schoolboy Andrey, 15, from Balashikha, a city bordering Moscow, hung a Navalny portrait on his wall - and was called for a 'talk' with police and a psychologist. 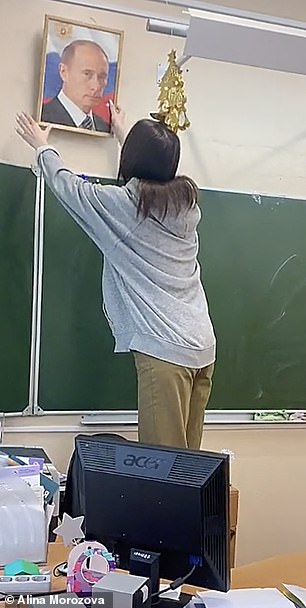 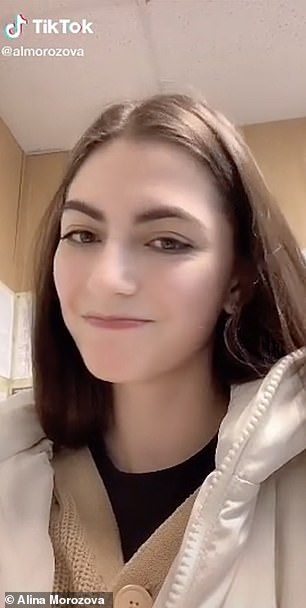 Alina Morozova, thought to be 16, posted a video in which she took down the photo of Vladimir Putin hanging in her classroom.  She also took a short video of herself at the police station while waiting to be interrogated by Russian police (pictured) 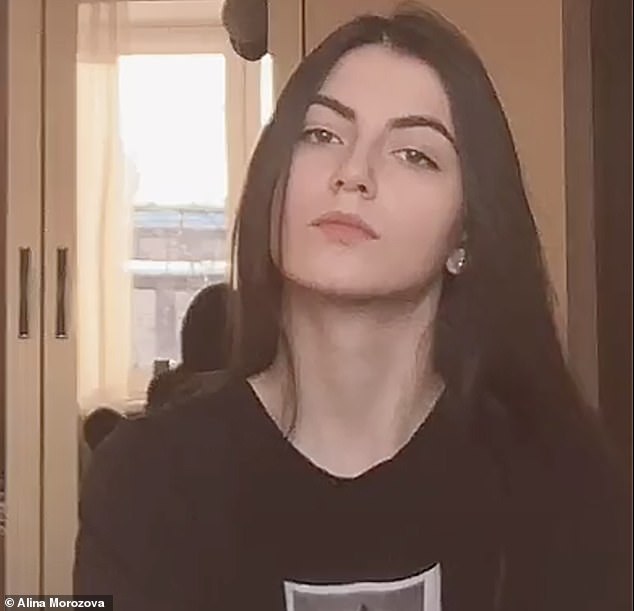 According to reports, Alina has avoided punishment as there is no law banning people removing the president's image

Teachers are handing out messages which threaten the students' future prospects should they attend the rallies tomorrow.

A teacher at Krasnoyarsk Aerospace College, Natalya Reshetnikova, was recorded by her students declaring: 'If you are legally charged for violating public order, it'll be a stinky stamp on all of your professional life.

'This will shut the doors to all decent companies - unless, of course, you aspire to chop carrots at KFC.'

In St Petersburg, parents were told: 'Protect your children from being sucked into destructive actions that can lead to psychological problems in the future and to unpredictable consequences in their lives today.'

Putin's Children's Minister Anna Kuznetsova claimed youngsters are 'being used as a human shield, behind which somebody is planning to hide'.

Parents were worried and wanted to 'put an end to this bacchanalia', she claimed. Some parents' organisations are calling for TikTok to be banned in Russia.

'These are Western social networks, they manipulate our children in every possible way in order to bring them to the streets,' parents' leader Olga Letkova said. 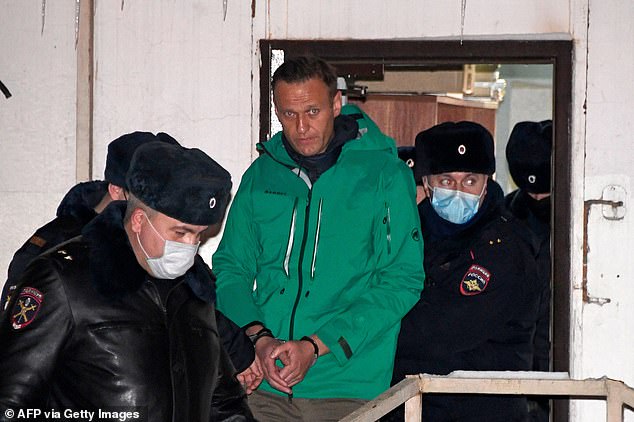 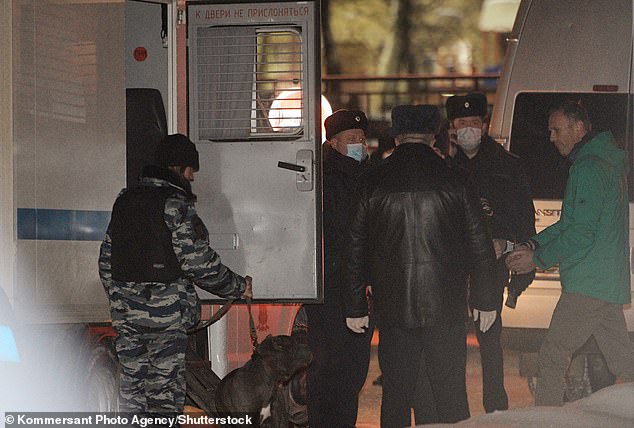 Navalny was taken to a police van and driven to prison a day after his dramatic return to Russia, which came five months after he was airlifted to Berlin in a coma following the poison plot against him 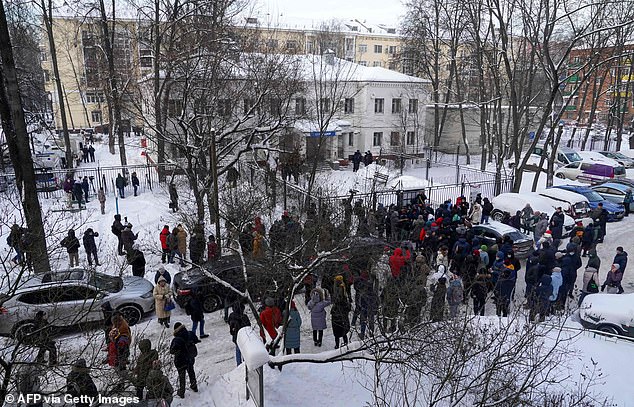 'At the protests, there will certainly be provocations and attempts to turn this into bloody massacres….

'It is obvious that this is a coup attempt that is being conducted in the West.'

Reports today say officials are seeking a 13-and-a-half year sentence for Navalny in new legal action brought against him.

He faces charges of stealing supporters' donations and the return of an old embezzlement accusation. He and his aides say the legal action is 'political'.

Navalny has accused Putin of personally ordering his attempted assassination while also unleashing a video which accuses him of mammoth corruption.

It claimed he owned a £1 billion palace on the Black Sea, which the Kremlin denied.

Sergey Boyko, a Navalny supporter in Novosibirsk, was detained with his wife Elena ahead of the rallies, say reports.

'There is only one possible opinion — the law absolutely must be complied with and illegal events cannot be organised, even less so with participation of the young people and children.'

Arnold Schwarzenegger has been involved in a multi-vehicle crash in Los Angeles,...