Now that's a top hat! Glamorous Royal Ascot revellers get Friday off to a fabulous start in statement millinery and vibrant colours

By Stephanie Linning For Mailonline

Royal Ascot racegoers have stunned with their eye-catching ensembles this week - and the glittering fashion show continued as the fourth day of festivities got underway this morning.

Revellers dressed to the nines in their finest frocks, sharpest suits and most fabulous hats descended on the Berkshire racecourse ready for yet another day of fun and frolics.

Among the early arrivals was milliner Ilda Di Vico, who made a statement in a pleated neon pink frock and an extravagant headpiece adorned with butterflies.

Making an entrance! Milliner Ilda Di Vico in one of her own creations, left, and businesswoman Valerie Stark in a sharp suit 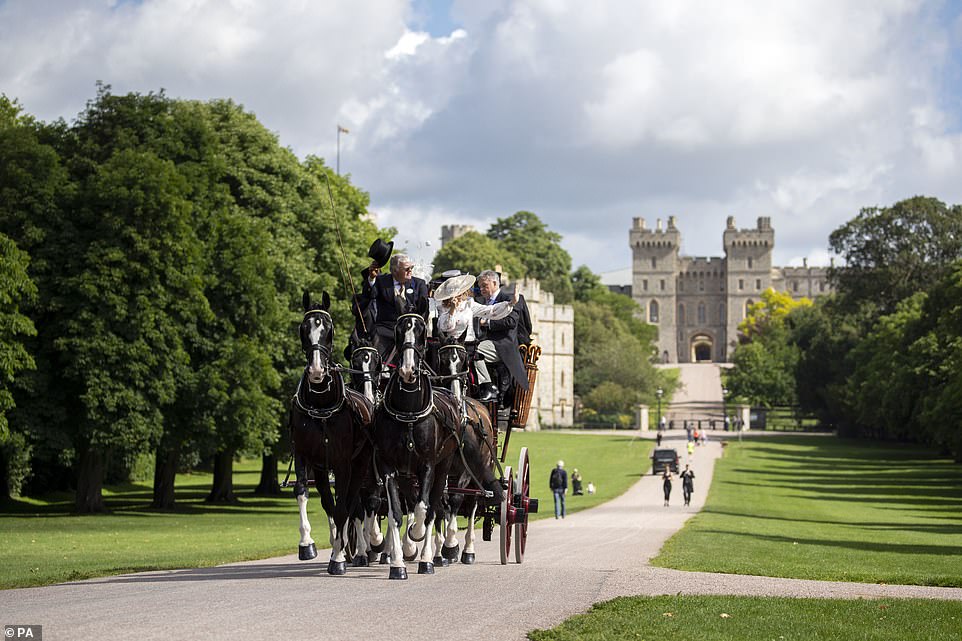 Fit for a royal! Royal Enclosure guests heads along the Long Walk at Windsor Castle as they make their way to Ascot 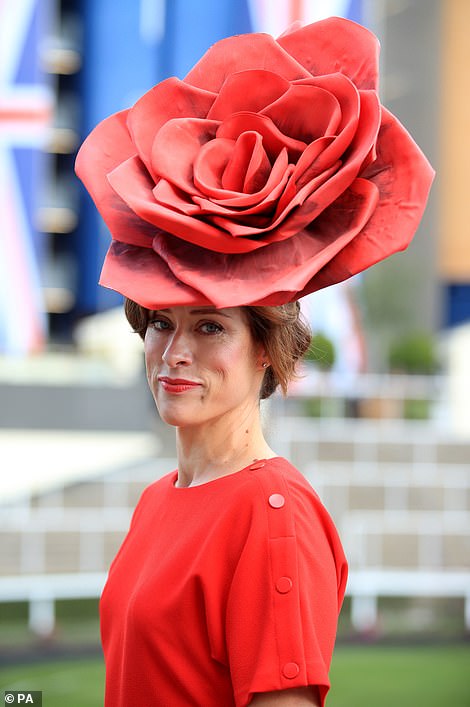 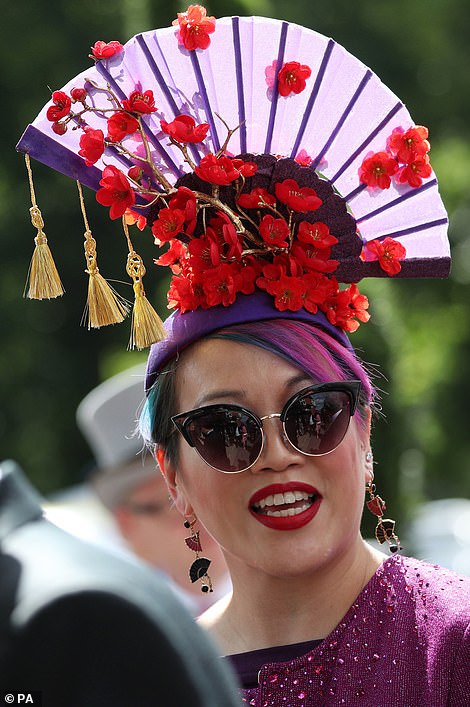 Hats off to them! A dramatic rose headpiece, left, and one shaped like a fan, right, were both on show at Royal Ascot today 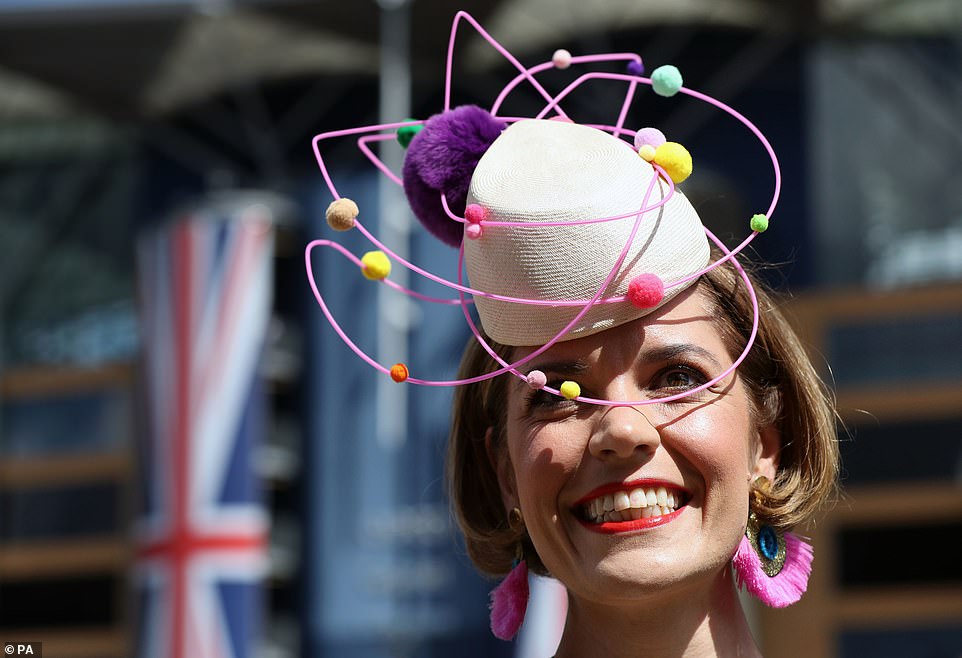 Out of this world! Sarah Soulsby, from London, showcased a galaxy inspired hat for the fourth day of Royal Ascot today 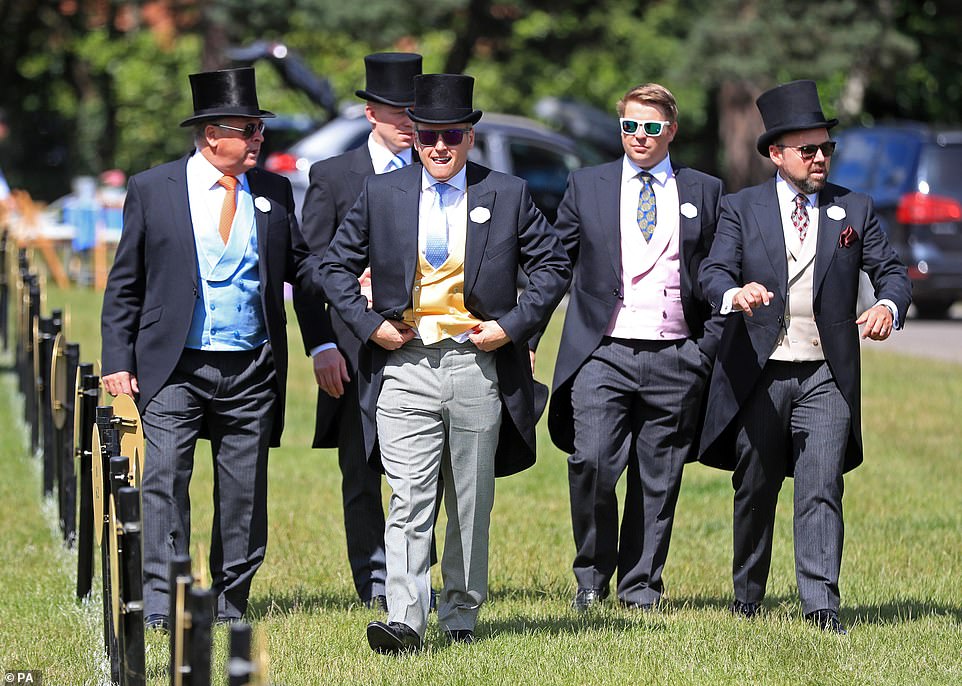 Here come the boys! A group of sharply dressed men arrive for the fourth day of Royal Ascot this morning

With the clue in the name, Royal Ascot is hugely popular with the monarchy and Her Majesty has attended every year since ascending the throne.

She is expected to return for the fourth day in a row this afternoon and will arrive in the traditional carriage procession at around 2pm.

Yesterday the monarch, 93, attended alongside several members of the Royal Family including Princess Eugenie, Zara Phillips and Sophie, Countess of Wessex. 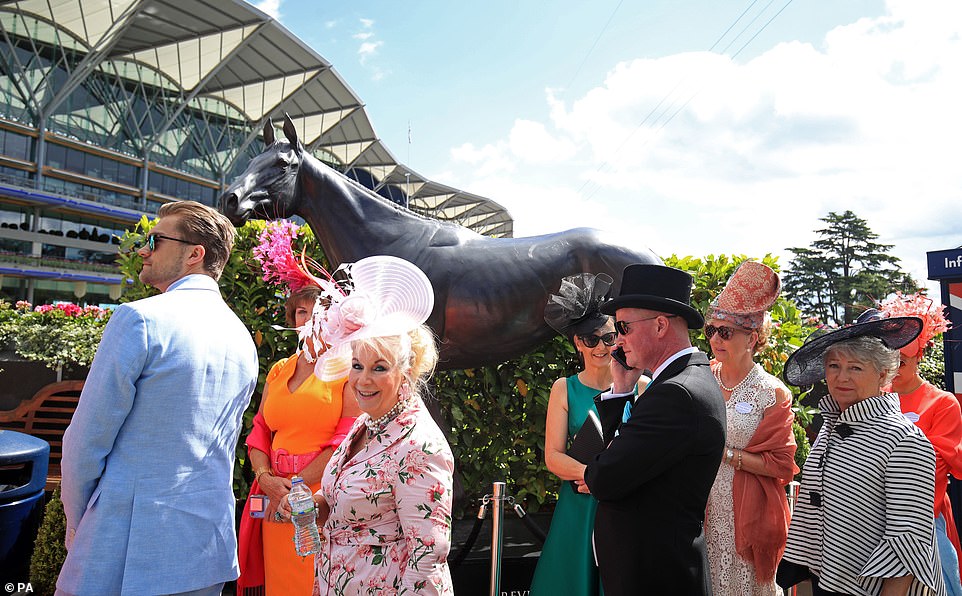 Classy affair: Hats, suits and demure summer dresses were all on show as racegoers made their way inside the course today

This year racegoers have pushed the boundaries when it comes to fashion - with daring hemlines and thigh high slits both on show.

Others have kept it classic in demure summer frocks. Suits have also proved a popular trend for women.

Visitors to the Royal and Queen Anne enclosures have to abide by a strict dress code, which does not allow bare midriffs or strapless dresses, but for guests in the Windsor and other enclosures the rules are more relaxed.

Up to 300,000 people were expected to descend on the event over the course of five days. 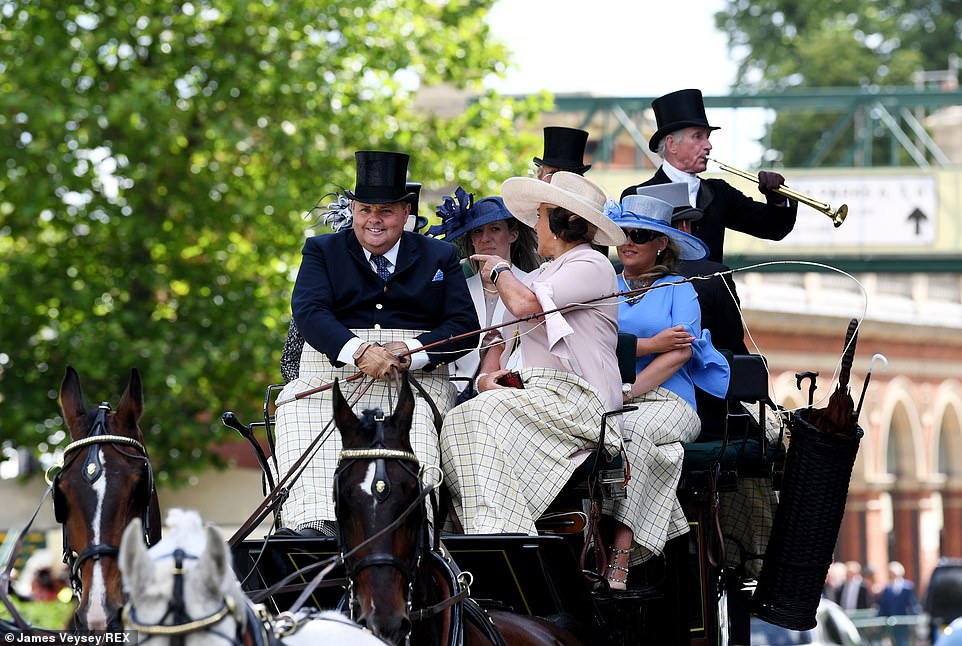 Here they come! A fanfare announced the arrival of this traditional horse drawn cart at Royal Ascot this morning 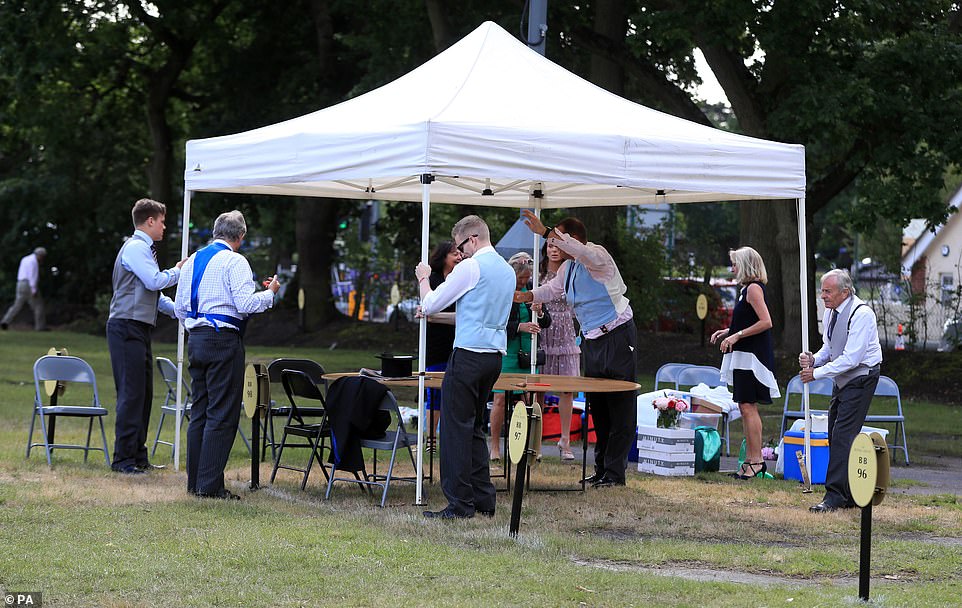 Getting ready for the day! This group get busy and set up their tent ahead of a morning of relaxation at Royal Ascot 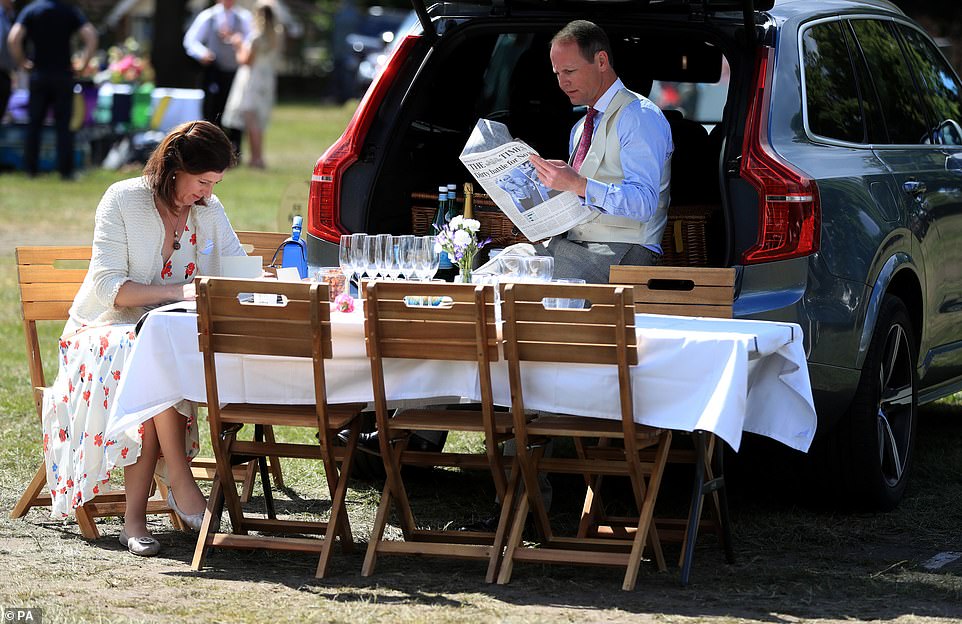 Quiet moment: This couple enjoy some downtime ahead of a carpark picnic with friends at Royal Ascot this morning 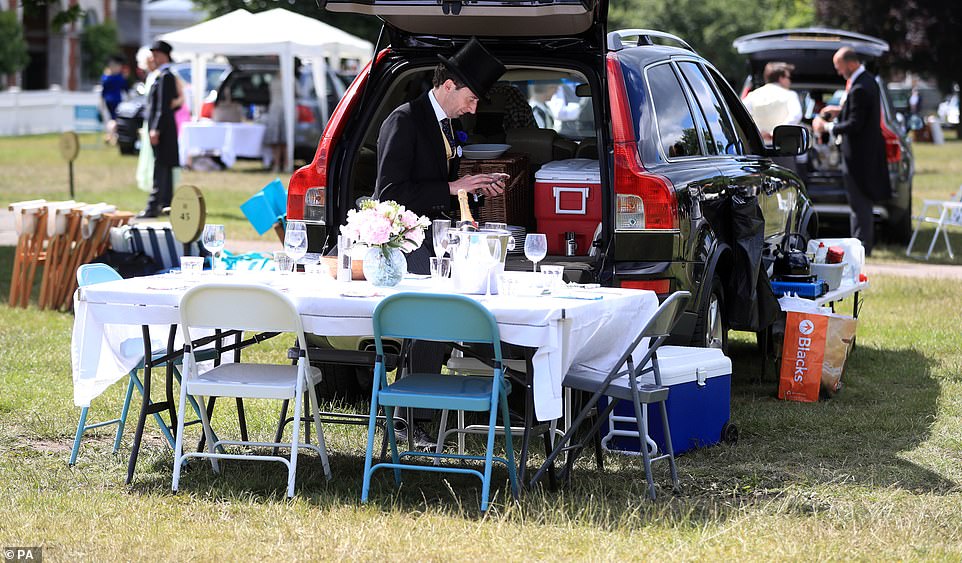 Attention to detail: Champagne on ice, a vase of flowers... now all he needs are guests! This gent was the ultimate Ascot host 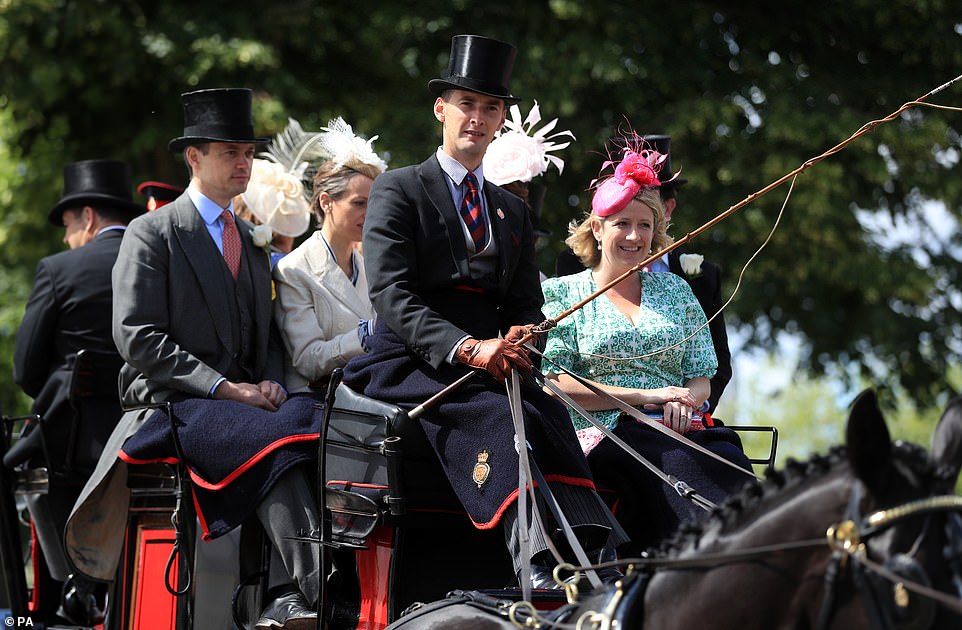 Keeping up tradition: A small group of racegoers opted to arrive for Royal Ascot in a traditional horse drawn carriage

Tiger Mums are so over, says ESTHER WOJCICKI

RICHARD KAY on how Hunt proved there's still place for...