'Let's continue the conversation': Tory leadership loser Rory Stewart CARRIES ON with #rorywalks after announcing plan for centrist 'takeover' of Conservative Party as Brexiteers tell him to join the Lib Dems

Rory Stewart has vowed to carry on venturing to different parts of the UK to talk to voters even though he has been ousted from the Tory leadership contest.

Mr Stewart last night called for a centrist takeover of the Conservative Party in a move which prompted angry Tory Brexiteers to tell him to quit and join the Liberal Democrats.

The International Development Secretary wants 300,000 moderate voters to join the Tories and push the party back towards the political centre ground.

Today he doubled down on the call as he urged his supporters who have already joined the Conservatives because of his leadership campaign to “encourage others to do the same”.

Eurosceptic MPs believe the former leadership challenger who was booted out of the race for Number 10 in the third round of voting is a 'strange fit' in the Tory party given his soft Brexit stance and they said he should consider finding a new political home.

But allies of Mr Stewart insisted he had no intention of leaving the party and that he was not speaking 'off the cuff' when he called for a centrist army to form a Conservative version of Momentum.

MailOnline understands that Mr Stewart will be setting out his vision in the coming weeks for how he intends to transform the Tories into a more moderate political force.

Today he restarted his ‘Rory Walks’ campaign as he invited people to meet him at Penrith Castle Park in his constituency.

Responding to a tweet from someone who told him he had just joined the Tories because of his campaign, Mr Stewart replied: “Thank you - and please encourage others to do the same - this can be again the party of the centre ground.” 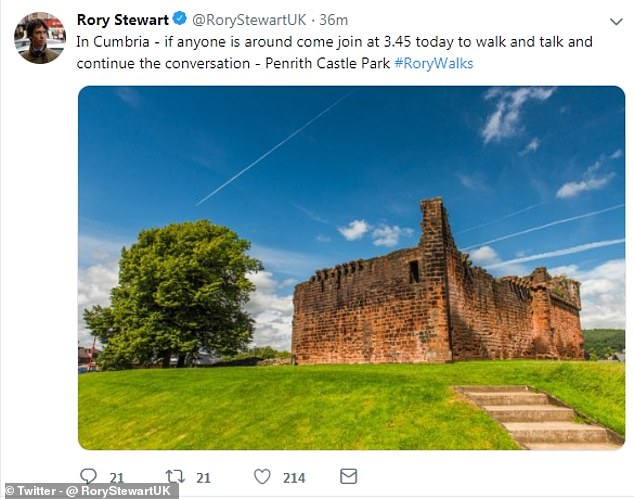 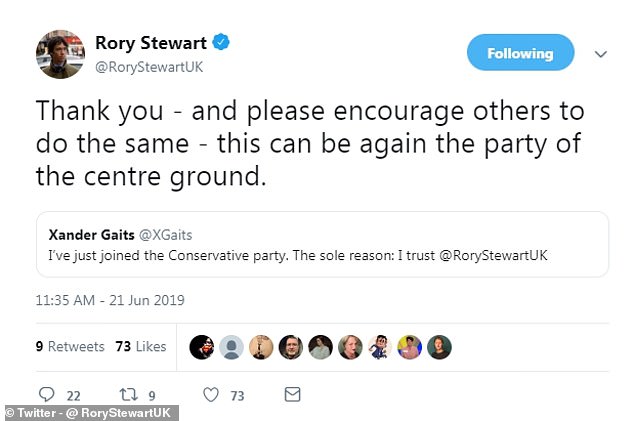 The surprise package of the Tory leadership race addressed a 'losers rally' in central London last night, telling the crowd they could make the Conservative the 'party of the centre ground'.

Mr Stewart's decision to urge tens of thousands of people to sign up to the Conservative Party to dilute the Brexiteer majority in its ranks immediately raised eyebrows especially since it came after he had been eliminated from the race for Number 10.

He told a so-called 'loser's rally' on London's Southbank yesterday evening that together they could make the Conservative the 'party of the centre ground'.

One Tory MP told MailOnline that if Mr Stewart was unhappy with the Conservative Party's current membership he should consider joining another political vehicle.

'We want more people to join the Conservative Party - if they believe in Conservative principles,' the MP said.

'It seems to many of us that he is closer to the Liberal Democrats and might want to join them.

'Nobody would be surprised if Rory Stewart left the party after what he has been saying.'

They added: 'He would be a strange fit in the Tory party at any time. He is a side show.' 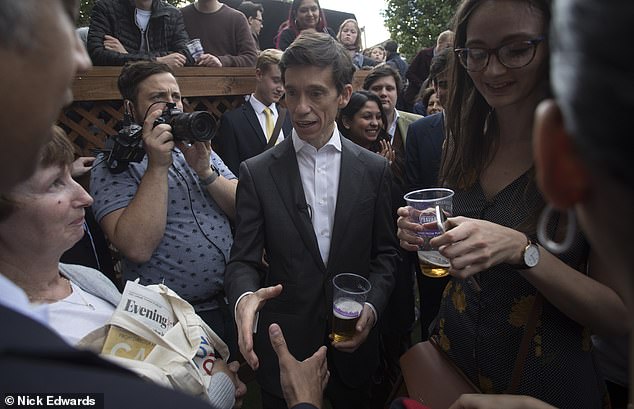 Nice to meet you! Mr Stewart took the time to shake hands with those in attendance and everyone seemed to be having a good time 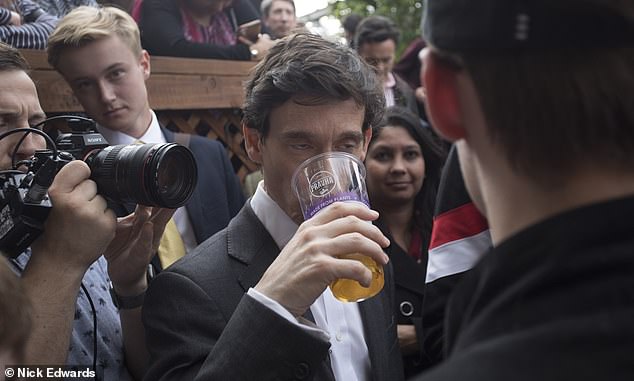 Mr Stewart's call for a Tory party takeover inevitably prompted comparisons with the Hard-Left Momentum campaign group which was set up to support Jeremy Corbyn as he took control of the Labour Party in 2015 and attack his enemies.

Allies of Mr Stewart said the suggestion at last night's rally was 'not off the cuff' and that more details about his plans would be set out in the coming weeks despite the fact it is Boris Johnson and Jeremy Hunt who are now fighting for the right to lead the party and not him.

One ally said: 'During the last couple of weeks he has been really excited by the amount of enthusiasm about the message he has put forward and he really believes he can re-engage people and win over people who have been excluded because of the way we do politics at the moment.

'He was trying to harness that and he wanted to say that this doesn't end now.'

A source close to Mr Stewart said he would not be quitting the party.

'He believes passionately in the Conservative Party and he certainly isn't going anywhere,' they said.

Mr Stewart told last night's rally that his supporters could transform the Conservative Party simply by joining it.

'The way that you will do that is by getting 300,000 members in to that party and making it again the party of the centre ground,' he said.

'An invitation to join a movement, an invitation also for some of you to do what you will be reluctant to do, which is re-engage with politics directly.'

He was pictured conversing with attendees as he clutched a pint. 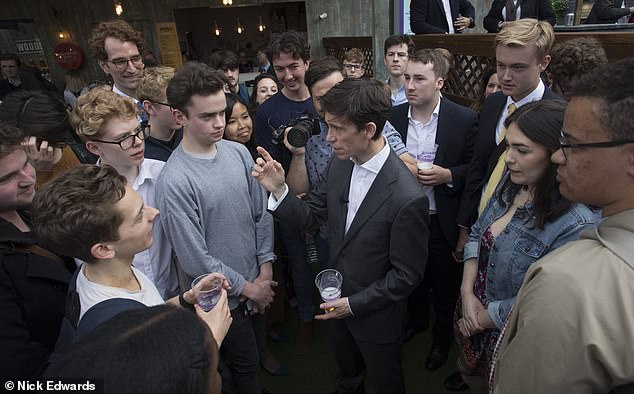 Attendees looked engaged with  Mr Stewart as he seemed to be engrossed in conversation with a group of people, while clutching onto his pint 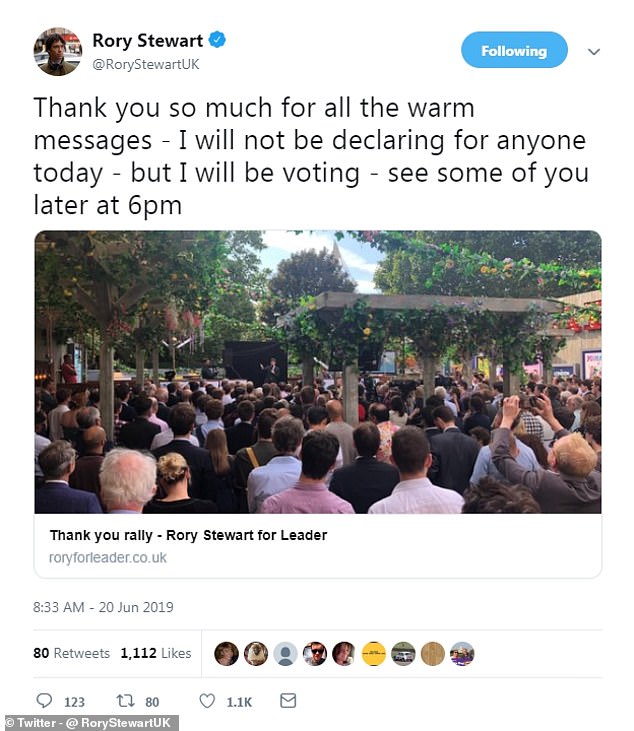 Mr Stewart has organised a thank you rally for his supporters. He has refused to say who he will now be backing in the final two rounds of voting

Mr Stewart was eliminated from the battle for Downing Street after his campaign went backwards and he dropped from 37 votes to 27 in the third round of voting.

He was viewed as potential king-maker in the race but declined to give any of the other candidates his endorsement.

'I will not be declaring for anyone today - but I will be voting,' he had said.

Mr Stewart organised the rally on London's Southbank at the same venue as where he launched his campaign to say thank you to his supporters.

Announcing the plan in a video published on his Twitter account, Mr Stewart appeared to poke fun at himself as he walked towards the camera and clumsily removed his tie. 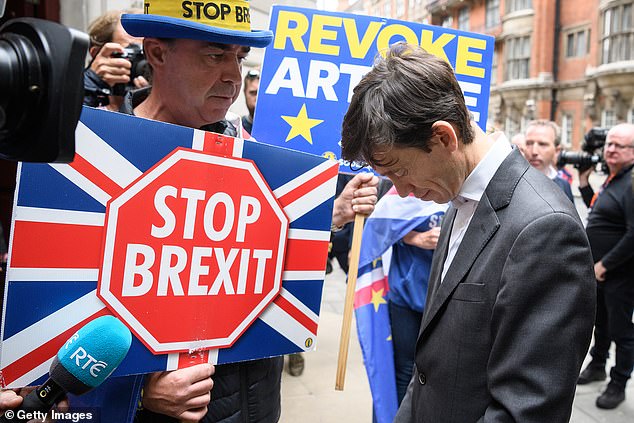 The former leadership challenger was mocked online after he took off his tie midway through a TV debate on Tuesday night.

He said in the video: 'Thank you all very, very much indeed and it has been an incredible campaign.

'I am really, really, really grateful that you came with me. Six o'clock... we are going to be back in the same venue in the Southbank Centre by the Spiegeltent.

'I have been so buoyed up and energised. I am not disappointed by this result because I think we are uncovering something extraordinary in this country and in British politics.

'And Rory walks on.'

Vendors plan to seek compensation from German government over...

Three people have been shot after a young girl brought a gun to her school and opened...