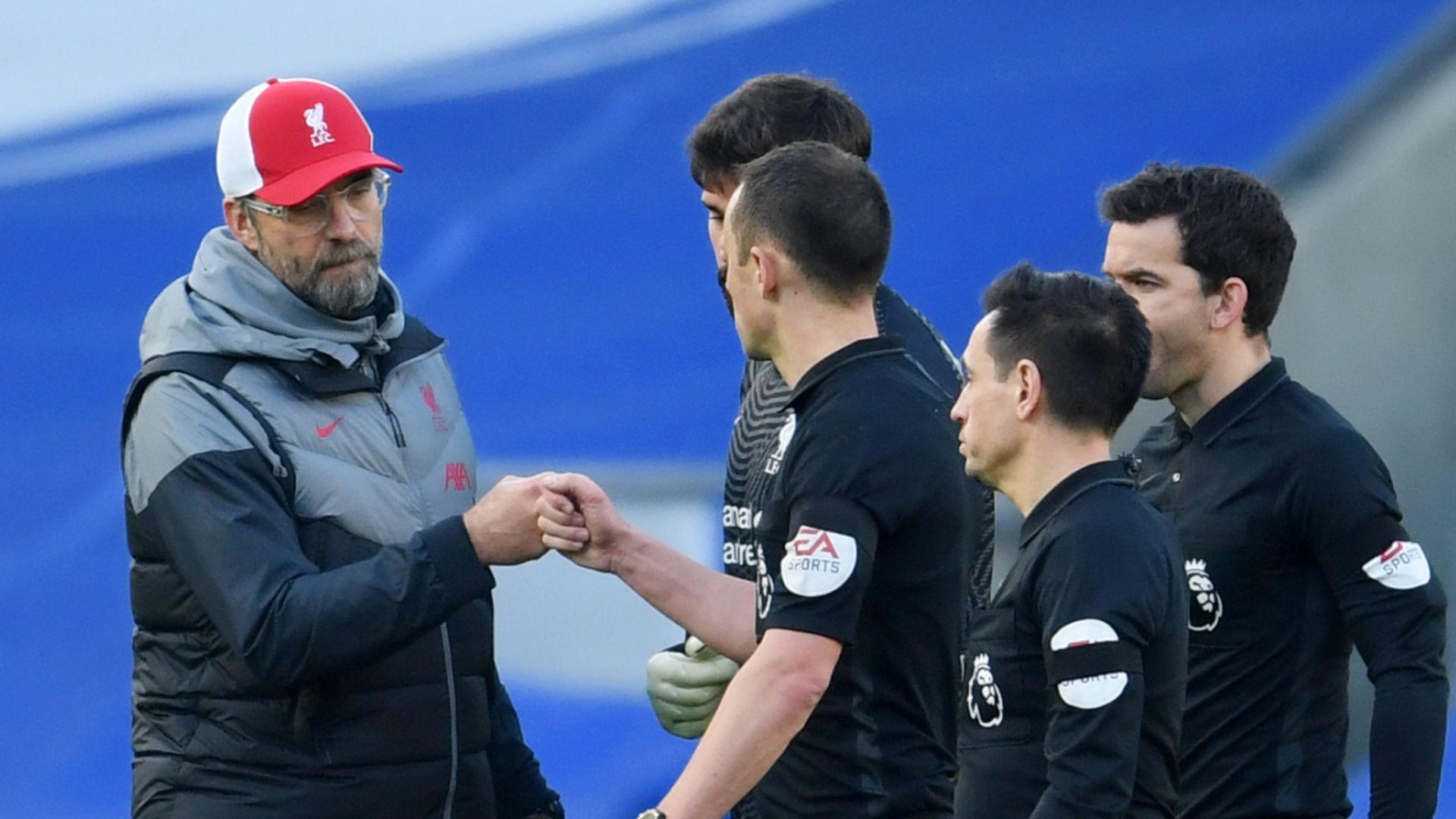 INCIDENT: Brighton are awarded a second penalty when Andrew Robertson is adjudged to have fouled Danny Welbeck inside the box. Referee Stuart Attwell awarded the spot-kick, scored by Pascal Gross.

VERDICT: "I think this raises all kinds of issues. What I would say is look at the position of Stuart Attwell, the referee. From what he can see, it's quite clearly not a penalty. When you see it in real time, you think Robertson has kicked the ball.

"But when you see the replays, and what VAR saw, it's quite clearly a penalty because Robertson kicks out and catches Welbeck. If he had caught the ball the way he would've liked, it would've gone way up field. The dilemma is that one man can see it's not a penalty while another man [VAR Kevin Friend] can see that it is.

"He's invited the referee to come and see what he's seen to make his own judgment. That's the good thing about the VAR now is that the on-field referee did make the decision albeit through the referee review area."

When asked if the original decision not to award the spot-kick was a 'clear and obvious error', in accordance with the protocol whereby subjective calls can be overturned if identified, Dermot added: "This is the dilemma, as you can see from Stuart's angle that it's clearly not a penalty.

"But when you go to the angle behind the opposite goal, which the VAR saw, you can see it clearly is a penalty. The VAR has then got the information that Stuart hasn't got, and he's invited him to the review area to have a look at it himself.

"That's the process. People can ask whether it's a clear and obvious error, and it is when you look at the angles the VAR had. It's impossible to say to the referee 'it's not a penalty' when you've got that view."

INCIDENT: Mohamed Salah is denied the opener in the first half at the Amex Stadium when collecting Roberto Firmino's pass to score beyond Mat Ryan but upon VAR review, the goal is disallowed for offside. Salah was deemed to be fractionally in front of the last Brighton defender.

VERDICT: "I've said this for many, many weeks since VAR came in. It just shows you the margins we were operating to beforehand, and how good the assistants were in getting decisions right."

In the Eredivisie, officials have made the lines thicker in order to favour more goals being scored, and removes the 'armpit' debate. Such a stance is removed from FIFA's position of 'zero tolerance' on offside goals, but Dermot has come up with his own viewpoint he would like to see implemented.

Dermot added: "IFAB say it has to be 'yes' or 'no', so I'm not sure how the Eredivisie get away with it. There should be no middle ground with them. I would like to see a system where the line is drawn where the forward's feet are.

"Forwards curve their run where naturally their body comes forward, and a lot of the disallowed goals we've seen this season have come from the lines being drawn at the top of the body. But he's curving his run, and if you draw the line at where the feet are planted, many of these goals wouldn't be disallowed.

"I wonder if this is something worth experimenting with. By having a line from the feet, there would still be a yes and a no."

INCIDENT: Marcus Rashford goes down inside the Southampton penalty box during the first half under a challenge from James Ward-Prowse but referee Jon Moss refuses to award a spot-kick.

VERDICT: "This is a tough call and it comes down to the individual referee. It's such a subjective call as there is a tangle of legs. There's no doubt there's contact, but I would back the referee in this case as both players are falling. The ball is between them so there's going to be contact. I would say that's not a penalty."

When asked for the difference between this penalty not being awarded and Brighton's second being given, Dermot added: "It's the actions of the players. Both are competing for the ball and both are falling. There is contact but it's between both players as opposed to one player on another."

INCIDENT: Wolves winger Adama Traore goes down inside the box under a challenge from Gabriel but referee Michael Oliver awards Arsenal a free-kick and brandishes a yellow card at Traore for a deemed act of simulation.

VERDICT: "On this occasion, if the referee doesn't give a penalty, the best thing to do is leave it alone and give a goal-kick. For me, there's contact between the two players... did the players come together and collide with each other? I don't think he needs to give the yellow card.

"There is a third ground and that is to do nothing. It's not a penalty for me. I feel both players just come together."

Ref Watch: Should Brighton have been awarded second pen?

Djokovic not sure ATP Cup is happening