Baby food pouches could make you 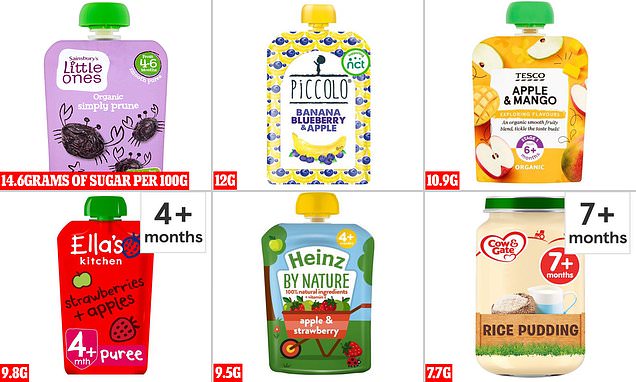 Baby food pouches could make your child fat and hook them on sugar for life, warn doctors

The Royal Society of Paediatrics and Child Health fear children may develop a 'sweet tooth' if they're fed too much sugar at an early age.

And the body said convenient ready-made foods, made by big-name brands such as Ella's Kitchen, Heinz and Cow & Gate, may be fuelling the problem.

The products can contain almost 10g of sugar in a single packet – more than half of a baby's daily allowance.

Parents should instead encourage children to eat more savoury foods and explore different tastes such as bitter spinach and broccoli, the RCPCH said.

Baby foods may marketed to look healthy with pictures of fruit and vegetables but many actually contain around half as much sugar as a baby or toddler should eat in an entire day. Four-year-olds should be limited to 19g per day, and toddlers even less than that

It said the Government should impose a legal limit on how much 'free sugar' – those which occur naturally in fruit and honey – can be included in baby food.

The RCPCH made the calls for action in a report which it hopes will help to tackle tooth decay and obesity among children.

Free sugars are basic sugars such as glucose and fructose and ones which occur naturally in foods like apples, bananas and honey.

Although these have less of a bad reputation than the refined sugar used in fizzy drinks and chocolate, they have the same effects on the body. 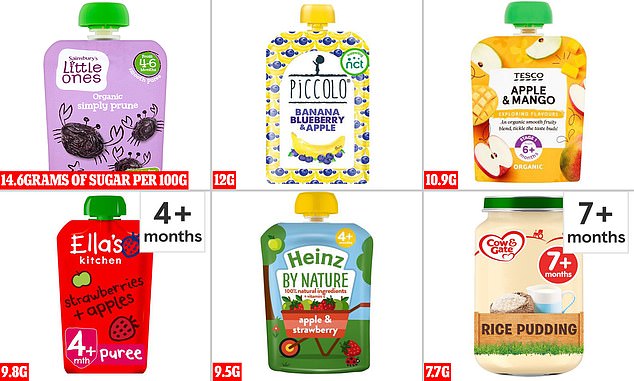 Growing numbers of children are overweight – around 30 per cent of them, with 17 per cent rated as obese – and much of this is blamed on high-sugar diets

Eating too much can cause the teeth to rot, make people gain weight, and even contribute to diabetes in an unhealthy diet.

The Government's Scientific Advisory Committee on Nutrition (SACN) recommends free sugars make up a maximum of five per cent of a child's daily energy intake. And this proportion should be even lower for toddlers under the age of two.

However, a survey of people across the UK revealed the average for one to three-year-olds is more than double that at 11.3 per cent.

Much of this is thought to be coming from babies' food in jars and pouches, the RCPH warned in its report.

Professor Mary Fewtrell, of the RCPCH, said: 'Family life is busier now than ever before, so jars and pouches prove popular with parents because they are so convenient.

'We therefore want to see the Government introduce mandatory guidelines on how much free sugar they can contain.

'We also think there should be more investment in public health education to advise parents on the impact of free sugars.

'For parents making their own baby food, we’d encourage them to balance the sweeter tastes with more bitter ones.'

Eating foods high in sugar can saturate the body with calories it doesn't need which are then stored as fat, making people gain weight.

Growing numbers of children are overweight – around 30 per cent of them, with 17 per cent rated as obese – and much of this is blamed on high-sugar diets.

And sugar also destroys the enamel coating teeth and leads to tooth decay, which affects 23 per cent of five-year-olds in the UK.

The RCPCH also warned that the pouches are being used at the expense of children becoming familiar with more sour-tasting vegetables.

'Part of the problem is that baby weaning products often contain a high proportion of fruit or sweeter tasting vegetables,' said the RCPH's Professor Mary Fewtrell.

'And parents also often use fruit or sweet tasting vegetables as first foods at home.

'It’s important to recognise that babies have an innate preference for sweet tastes but the key is not to reinforce that preference and to expose them to a variety of different flavours and food textures.

'Babies are very willing to try different flavours if they’re given the chance. 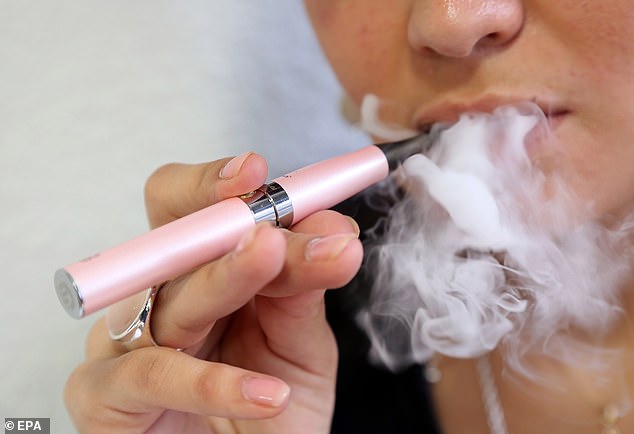 Adverts for e-cigarettes that may appeal to children should be banned, health experts say

E-CIG ADVERTS THAT MAY APPEAL TO CHILDREN 'SHOULD BE BANNED'

E-cigarettes adverts that may appeal to children should be banned, the Royal College of Paediatrics and Child Health (RCPCH) said.

It claimed that while e-cigarettes were less harmful than traditional smoking, marketing them for non-medical reasons should not be allowed.

Professor Russell Viner, president of the RCPCH, said: 'Use of electronic cigarettes has risen dramatically over recent years as smokers take steps to reduce their exposure to the harmful toxins contained in cigarettes.

'This is a welcome move as smoking remains the single biggest cause of avoidable deaths in the UK.

'However, e-cigarettes are not "safe" - they still contain nicotine - and this rise in use, alongside glamorous marketing campaigns from manufacturers, creates yet another habit that is attractive to young people.'

Professor Viner said children and young people are impressionable, and while manufacturers cannot advertise directly to them, 'they can and do make their packaging and flavours very child friendly'.

'It’s important that they’re introduced to a variety of flavours including more bitter tasting foods such as broccoli and spinach from a young age.'

As part of its report, the RCPCH also claimed there should be a ban on advertising formula milk for children under the age of one.

The report comes as the Government is in the midst of various measures to try and improve children's health.

A sugar tax, which made drinks companies pay extra money to the Government or reformulate its products to contain less sugar, was brought in last year.

Officials are also considering forcing restaurants and takeaways to put calorie labelling on all their menus, using traffic light labelling for all foods and drinks, banning junk food adverts before 9pm and increasing the price of sugary products.

Matt Hancock, the Health Secretary, last month asked for England's chief nursing officer to help him come up with more strategies to cut down on childhood obesity.

President of the Royal College of Paediatrics and Child Health, Professor Russell Viner, said about today's report: 'We have a real opportunity to transform the future of child health in the UK.

'I think politicians are beginning to realise that investing in children reaps real benefits for the wider population.

'Our recommendations are backed by evidence and are practical.

'They will make a huge difference to child health and we urge the Government to consider them as a matter of urgency.

'If we don’t get it right for children, then the health of the whole nation is put in jeopardy.'

MailOnline has contacted the baby food manufacturers mentioned in the story for comment.

The chief executive of Ella's Kitchen, Mark Cuddigan, said: 'While we don’t add any sugar to our pouches, we are actively taking steps to reduce the natural sugar content of our highest sugar stage one products, by including fruits lower in sugar.'

'Baby food products are already tightly regulated and are also tailored to meet the specific needs of young children.

'At the same time, BSNA member companies are always working to improve their products and are keen to engage with experts on this issue.'

WHAT IS THE SUGAR TAX?

From April 2018, soft drinks companies have been required to pay a levy on drinks with added sugar.

Fruit juices and milk are not included in the tax.

Some drinks, including Fanta, Lucozade, Sprite, Dr Pepper and Vimto, had their recipes changed so they contained less than 5g of sugar and the price did not need to be put up.

However, others like Coca Cola and Pepsi refused to reduce the amount of sugar and, as a result, the price of them increased.

The Government has predicted the levy will raise £240million a year, which will be spent on sports clubs and breakfast clubs in schools.

The sugar tax raised £153.8m in the first six months after it was introduced, between April and October 2018.

DR GUY MEADOWS shares his advice on how to drift off like...

Greggs-loving teenager gets the logo tattooed on her leg