Woman who gave up her minimum wa 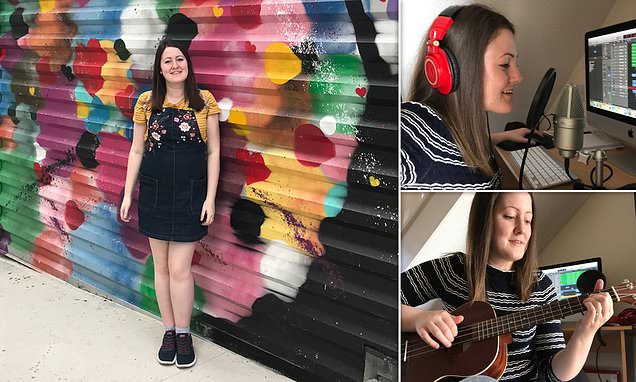 By Maisie Bovingdon For Mailonline

A woman who used to work as a cinema ushers has seen her income rocket to as much as £7,700 a month, after she ditched her job to write and perform TV jingles.

Sarah Hughes, 28, from Cinderford, Gloucestershire, who first advertised her musical skills on freelance marketplace Fiverr six years ago, has celebrated her windfall by buying her first property - a three bedroom house - with her husband, Gareth, also 28.

A trained musician, who has a degree in creative sound from Newport University in South Wales, Sarah has worked with brands such as John Adams, writing catchy tunes to advertise Bangle Blitz and Tiny Tears and Styling Head dolls.

She said: 'Not many jingle artists can play, sing and produce an entire jingle themselves.

'Because of my degree, that's something that's second nature to me now, and I think that's why I've done so well.' 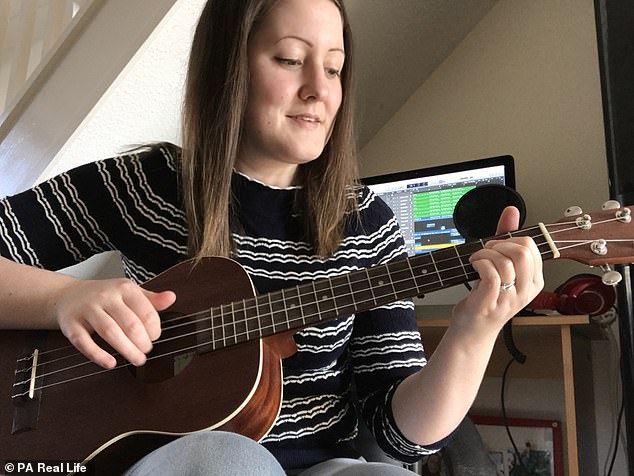 Sarah Hughes, 28, changed her career to write and perform TV jingles, which she brings to life in her own recording studio, and her new job has seen her rake in over £7,000 a month 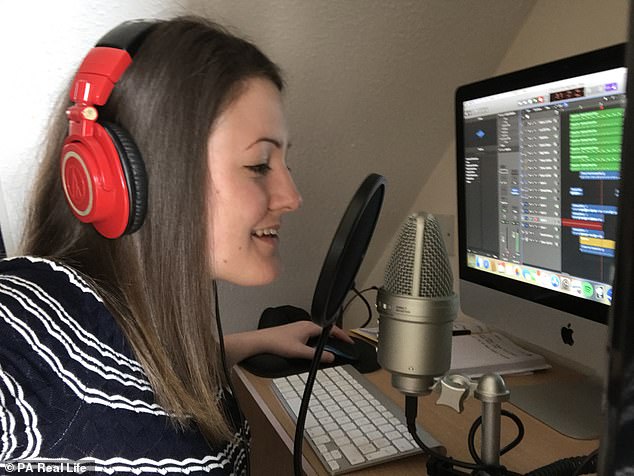 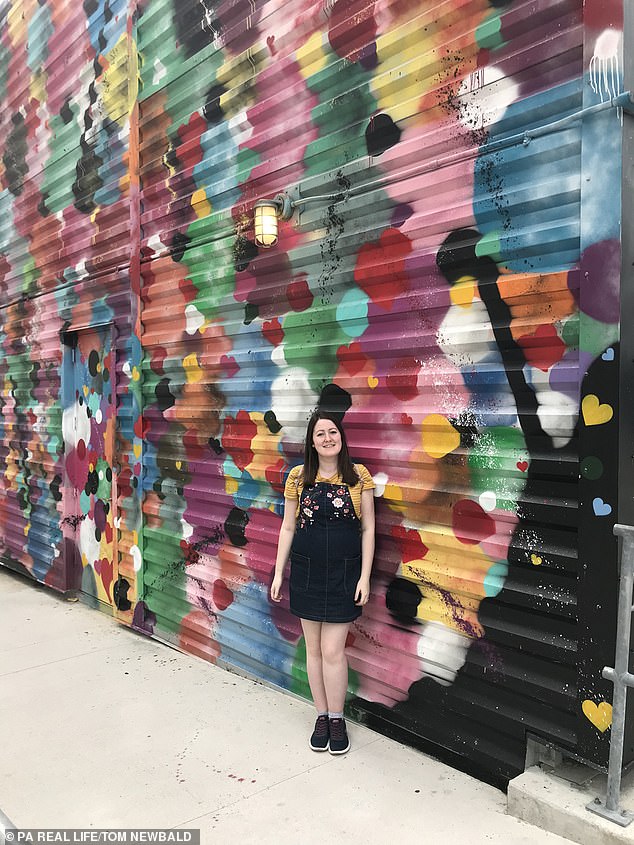 Sarah ditched her previous job as a cinema usherette to pursue her love of music, and the leap has paid off as she earns almost £100,000 a year

Working for just three to four hours a day, four days a week, every jingle Sarah makes takes roughly 30 minutes, not including any revisions.

But finances have not always been so flush for Sarah.

Developing a taste for music after strumming a guitar in class at the age of 12, she said: 'I remember picking it up for the first time and feeling an instant connection with the strings. 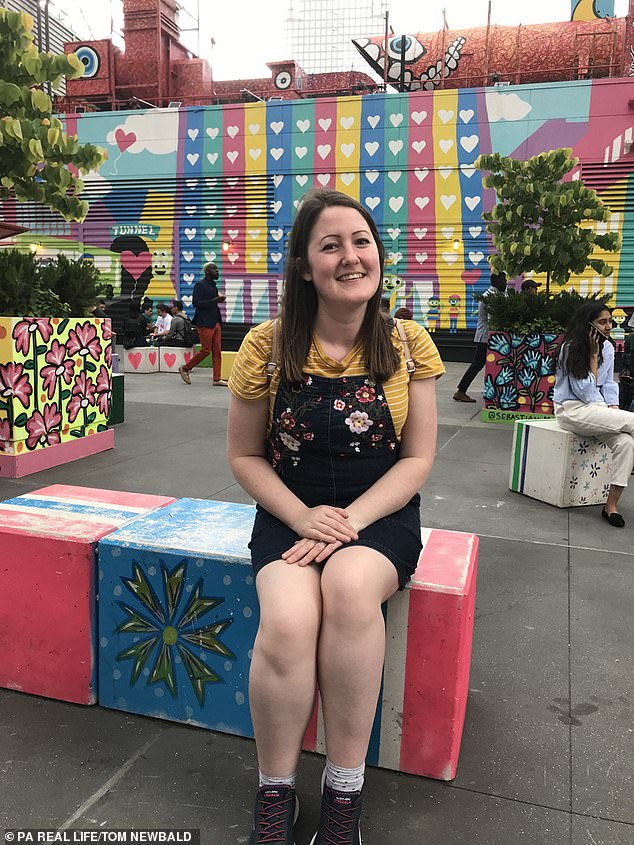 'For the next three years if I wasn't playing the guitar, I was writing songs to play on it.'

Taking music at GCSE and A Level, she then took a creative sound degree, forming Toy Pop, a student band with an emphasis on using toy instruments, including the kazoo, maracas and a melodica, while she was at university.

'With toy instruments I found my niche,' she said.

'I set up a band with some fellow classmates as part of my practical study and we'd play the instruments over a pre-recorded backing track we'd made. 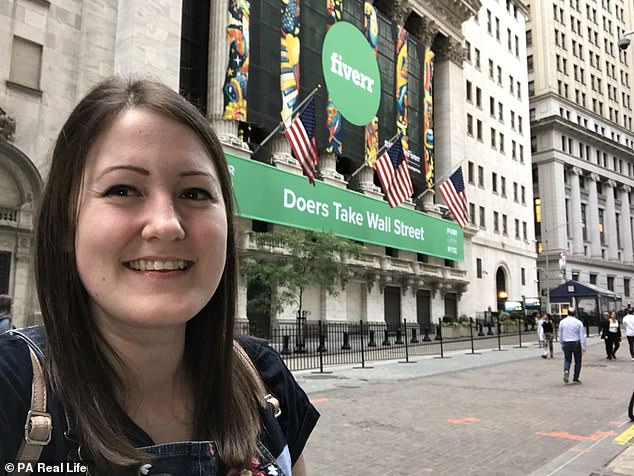 Sarah credits freelance marketplace Fiver, where she advertised her musical skills, for changing her life. Shortly after she signed up she started creating jingles 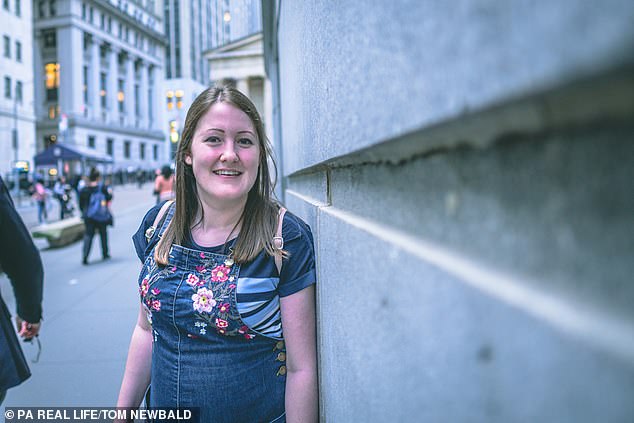 After Sarah graduated she moved back to her home in Shropshire and struggled to find work, until she secured a position working in a cinema

'Then we'd start improvising or singing stuff we'd written ourselves. I guess, looking back, that was the starting point of my jingle career.'

But Sarah - who met Gareth, a history graduate, who she married in November last year in Chepstow, Monmouthshire, through mutual friends on a night out in her third year - did not enjoy a harmonious start to working life.

Graduating in 2012, she moved back to her hometown of Bridgnorth, Shropshire, but after eight months of struggling to find a job, she started working at her local cinema.

'After years of being told an academic career in music would land me nowhere, I suddenly found myself, as predicted, going nowhere,' she confessed. 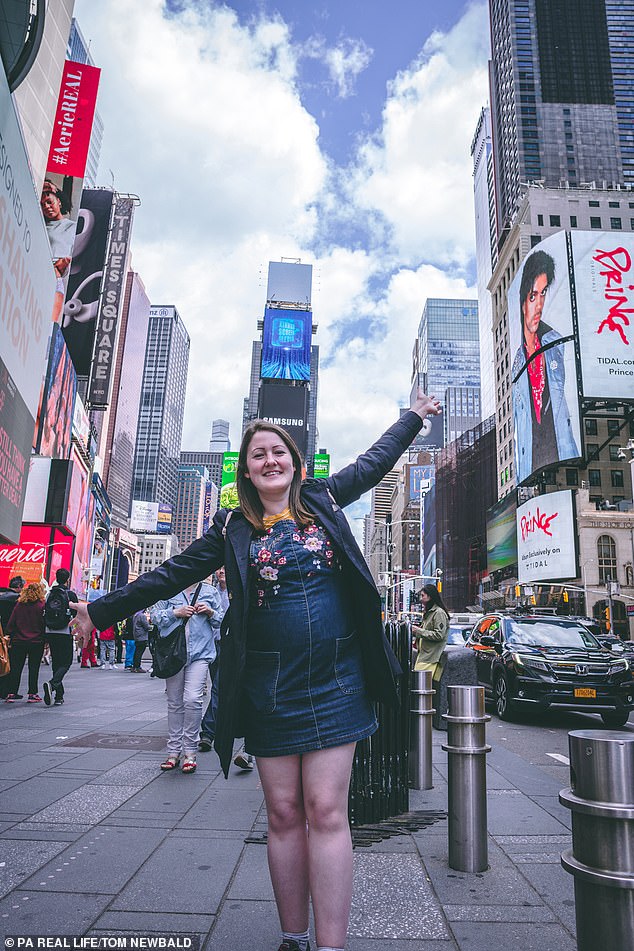 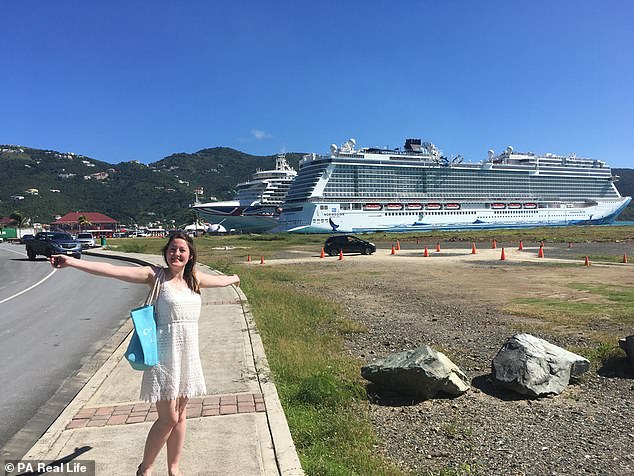 Sarah is fortunate enough to only work three or four hours a day, with each jingle taking her around 30 minutes each, for four days of the week

Her saviour came in the form of Fiverr, an online digital marketplace that allows businesses and digital freelancers to connect across the globe.

After hearing about it through a friend, Sarah decided to start advertising her skills online.

'I knew there was quite a demand for cutesy, light-hearted instrumental pieces, so I started off by advertising 30 second instrumentals with toy instruments for £4 a pop,' she explained.

After saving £120 in her first month, Sarah used the funds to purchase a microphone that she could hook-up to her computer, enabling her to add vocals to her services. 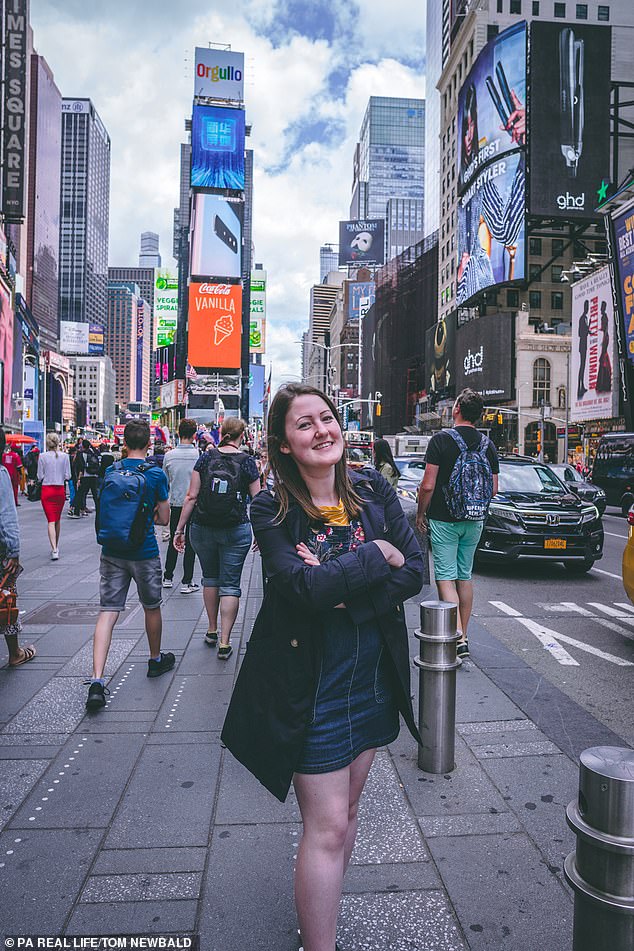 Sarah is proud her degree has paid off and seen her end up in a career relating to her studies. Although she has admitted she feared she wasn't going to progress

Equipped with new technical gear she began charging £20 for a fully packaged jingle, with the requests soon coming in thick and fast.

'You'd be surprised how many people out there are looking for a jingle,' she said.

'It's not just toy companies and children's adverts. In fact, my biggest source of income for the first few months were podcasts and YouTube channels.'

As Sarah's portfolio grew, so did her ratings on Fiverr, with her becoming a top trade seller in May 2013. 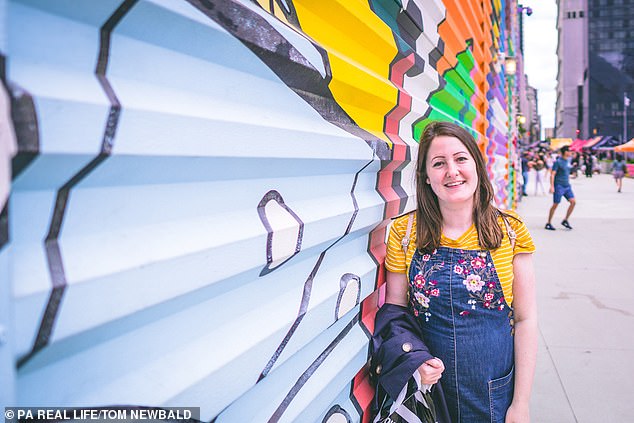 Sarah not only makes jingles but also created podcasts and YouTube channels before finding her niche, although she also makes professional voiceovers, personalised ringtones and bespoke love songs.

'After spending my entire education studying music, I couldn't bring myself to apply for a bog-standard graduate scheme after leaving university,' she said.

'Everyone loves to tell arts students that their degrees will get them nowhere and I'm so glad that now I've managed to prove them wrong.

'I might not have imagined myself singing jingles for a living while I was locked up in my room playing guitar all those years ago, but I'm doing something I love day in day out and I couldn't be happier!' 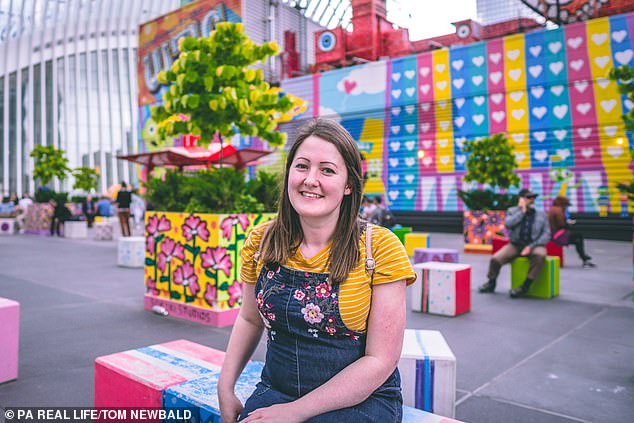 The creative mastermind has worked with major brands including John Adams' Tiny Tears doll and Styling Head, although she has also created personalised wedding anniversary tracks for clients

'Everyone is looking for an alternative to a bunch of roses or some fancy chocolates when it comes to special occasions, such as Valentine's day,' she explained.

'That's why I started advertising personalised love songs on my profile too – and the rewards soon started to add up.'

Sending a love-themed jingle can cost between £15 and £40, depending on the amount of facts featured in the piece.

'I recently did a 50th wedding anniversary song for a client,' she said.

'He sent in a list of things about his relationship and I sang it over a pre-made track so it's a really quick turnaround. 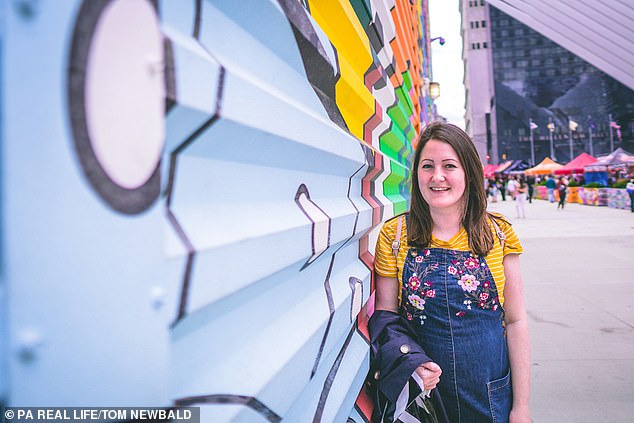 Sarah and her husband Gareth, who she met in the third year of university, are married and have bought their first home together, which she is immensely proud of as she acknowledges it is rare for people under 30 years old to be a homeowner

'If people send photos in I'll put together a slide show to tie it all together nicely, too.'

With jingles for big name brands like Craze Splash Beadys under her belt, by January 2017 Sarah was earning up to £3,000 a month from her jingle-making.

'I finally felt like I was making a proper salary from the work I was doing after nearly five years establishing myself as an artist.'

'With my line of work you never know when the demand is going to fall and each month is different to the last,' she explained. 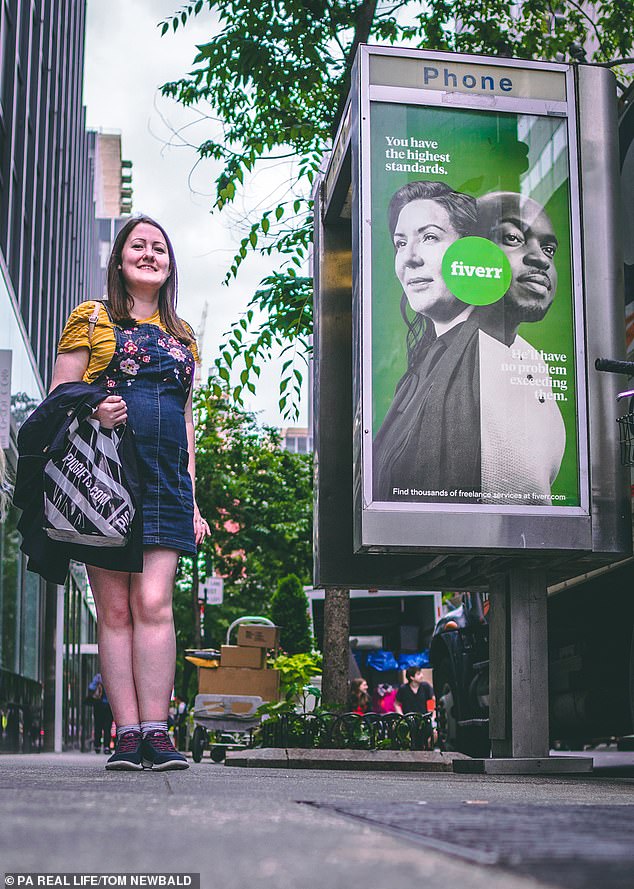 'It's brilliant having the tools to make as much money as I have, but it is still freelance work and you need to make sure you have a contingency plan and factor in things like your tax bill.

'That being said, it feels great knowing that we've been able to save up so much money from doing something that I love.

'Even six years in, nothing quite beats the thrill of hearing one of my jingles being played on telly for the first time.'

Sarah and Gareth are preparing to move into the first home they have bought together by the end of the month after saving up a substantial deposit, without any help, before the age of 30.

'We've worked hard to get where we are right now, and I can't wait to step through the doors of our new home,' Sarah said.

'After so many people told me my music would get me nowhere, and that it's impossible to own a house before you're 30, it feels great.'

Woman became pregnant after warnings chemo could leave her infertile

Man, 52, chopped up bed with chainsaw after accusing wife...

More than half of MPs claim free BBC licence at taxpayers'...

Pupil thrown out of class after saying there are only two...