By Nick Enoch for MailOnline

This is the shocking moment a man driving a vintage car smashed into the back of a stationary vehicle at around 70mph.

In footage taken last Friday, just before midday, the classic open-top Morgan is seen hurtling down the inside lane of the A5, near Telford, in Shropshire.

Without slowing down, it crashes into the rear of an Audi SUV which is waiting at a roundabout, sending the Morgan's bonnet flying off into the road.

The still-conscious middle-aged driver appears to then steer his badly damaged car onto the hard shoulder.

The occupants of the vehicle it hit happened to be full-time doctors in the NHS - Dr Syd Hassan and his partner, Dr Gulzar, both 31 and based in Kent. 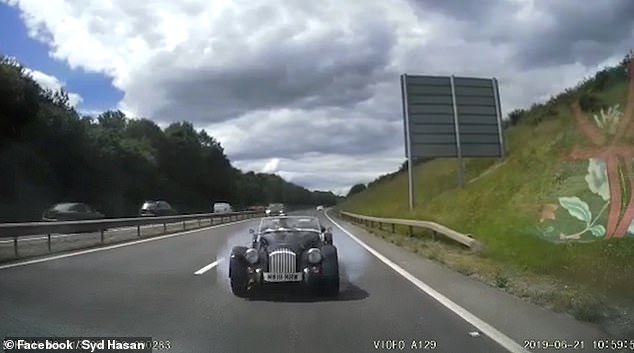 The driver of a vintage Morgan car heads down the A5, near Telford, in Shropshire, last Friday 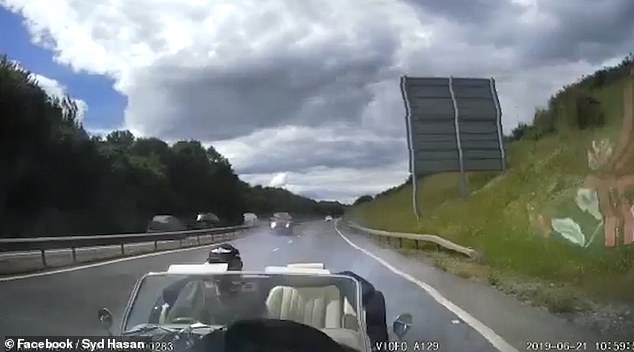 Travelling at around 70mph, he smashes into the back of an Audi SUV, occupied by two full-time NHS doctors - Dr Syd Hassan and his partner, Dr Gulzar 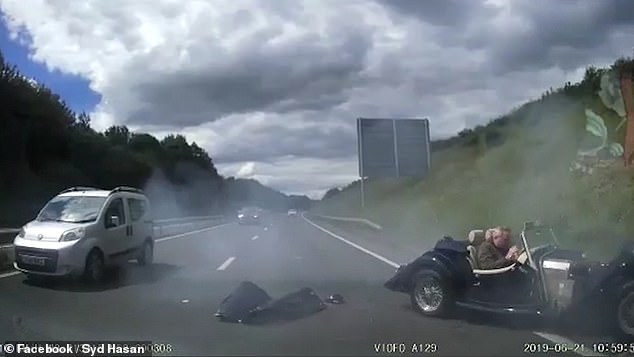 Still conscious, the driver appears to steer the vehicle onto the hard shoulder, leaving part of the bonnet on the road

Dr Hassan, a senior specialist registrar in acute and respiratory medicine, said that the driver was 'responsive initially' but then became 'sweaty and pale'.

He added that the Morgan driver mentioned something about his satnav and 'looking up too late'.

The Morgan driver was treated at the scene for injuries not believed to be serious, before he was taken to the Royal Shrewsbury Hospital for further assessment.

Dr Hassan, who was returning from a short holiday in Snowdonia with his partner, a specialty doctor in Accident and Emergency medicine, said: 'We were coming back home on the A5 near Shrewsbury.

'We slowed down with other cars at a busy roundabout when this gentleman came out of nowhere at 70mph and rammed his car into us from behind.

'My first reaction was that of shock but, being an emergency doctor, within seconds I was running to see if he was OK.

'My partner also started walking behind me but she felt dizzy and slumped down on the side of the road for few seconds to recover.' 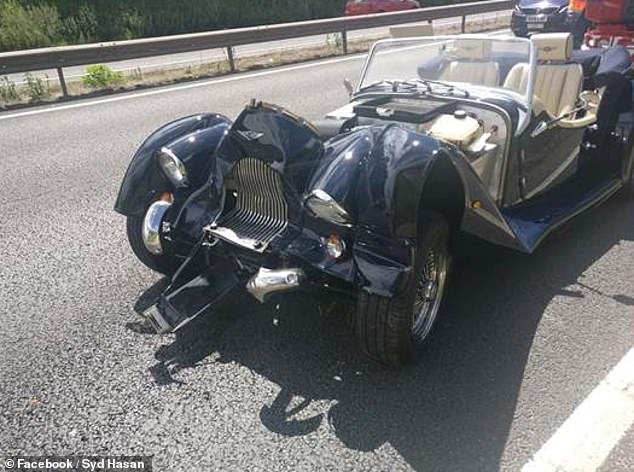 Dr Hassan assisted the vintage car driver (his vehicle wreckage, pictured), who looked 'sweaty and pale' after the accident 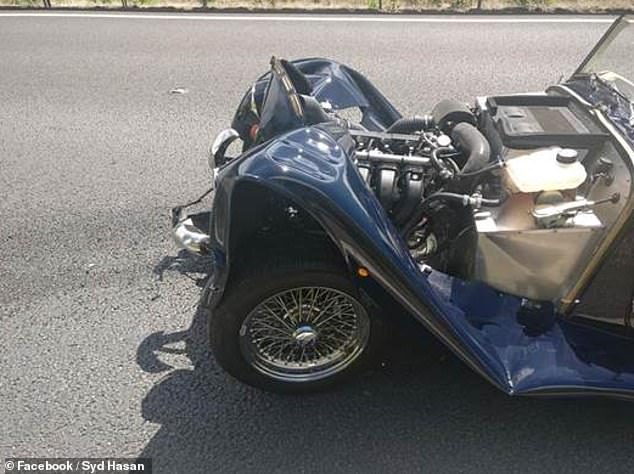 The vintage car driver was treated at the scene for injuries not believed to be serious, before being taken to the Royal Shrewsbury Hospital for further assessment

'Nobody stopped for a good 10 to 15 minutes and I checked the gentleman up and was helping him out of his car on his request, as his doors were jammed.

'A lovely couple stopped. She was an off-duty nurse in acute medicine and they helped me to get him out of the car.

'My partner called the police and ambulance, who were both on the scene within 25 minutes.

'The gentleman was responsive initially and said he got distracted and lost focus. He also mentioned something about his satnav and also that he looked up too late.

'He became quite sweaty and pale and was taken to hospital.'

Drs Hassan and Gulzar suffered soft tissue injuries to their necks and backs and received treatment at A&E.

A spokesman for West Midlands Ambulance Service said: 'One of our ambulances came across a two-car RTC [road traffic collision] on the A5 near to Emstrey, at 12.11pm on Friday, June 21.

'On arrival, crews discovered one patient, a man, who was the driver of one of the cars.

'He was treated for injuries not believed to be serious, before being taken to Royal Shrewsbury Hospital for further assessment.'

Germany to ban exports of side-arms to non-allies

Judge and jury visit the home where Ashton Kutcher's girlfriend...