Bringing the thunder: Met Office warn of danger to life as a MONTH'S worth of rain in one day will cause floods across England and Scotland today

The tropical temperatures that dazzled Britain in sunshine yesterday are to turn to rain today, as forecasters issue flood warnings all across the country.

Torrential downpours could see up to a month's rain fall in some places over a 60-hour period of wind, rain, lightning and hail.

The Met Office has warned of possible danger to life, claiming homes and businesses could be hit by floods, lightening strikes and gale-force winds.

Train and bus services could be delayed or cancelled, driving conditions treacherous and some areas could be hit by power cuts, the forecasters added.

Later in the week Britain could break its 35C (95F) June temperature record as a 2,000-mile wide African air plume brings Europe a record heatwave – and the Met Office forecasts a hot summer after the grim Sunday-to-Tuesday period.

UK temperatures will be hotter than Egypt and Thailand – but sweltering humidity means thunderstorms, more floods and Glastonbury facing mud.

Hot air is shown on a dramatic weather map covering Britain and stretching from Spain to Norway. Germany, due 41C (106F), is set to break its 40.3C (104.5) temperature record. 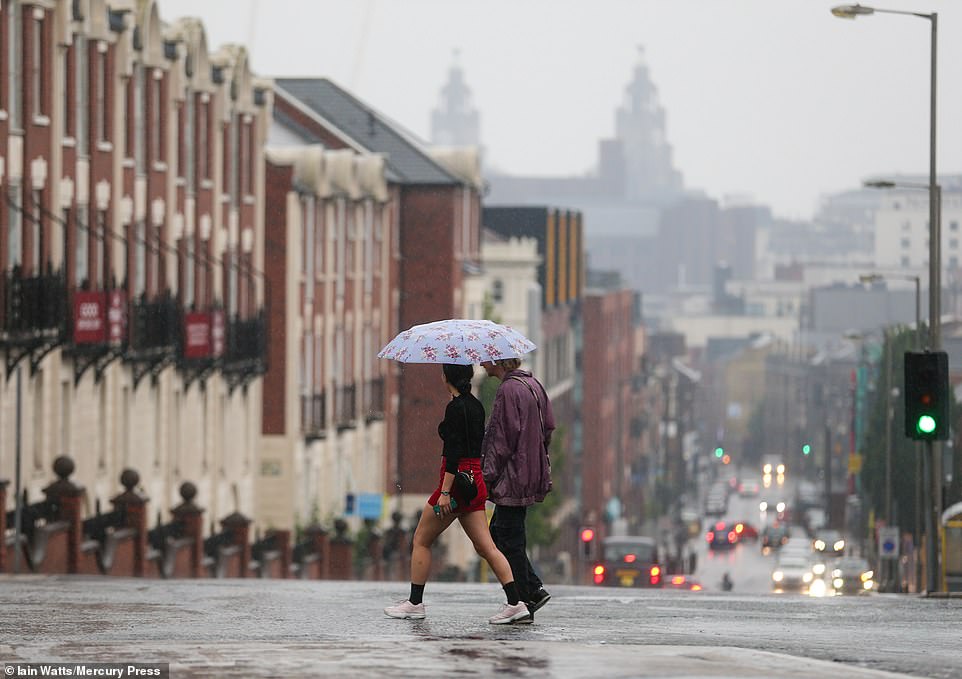 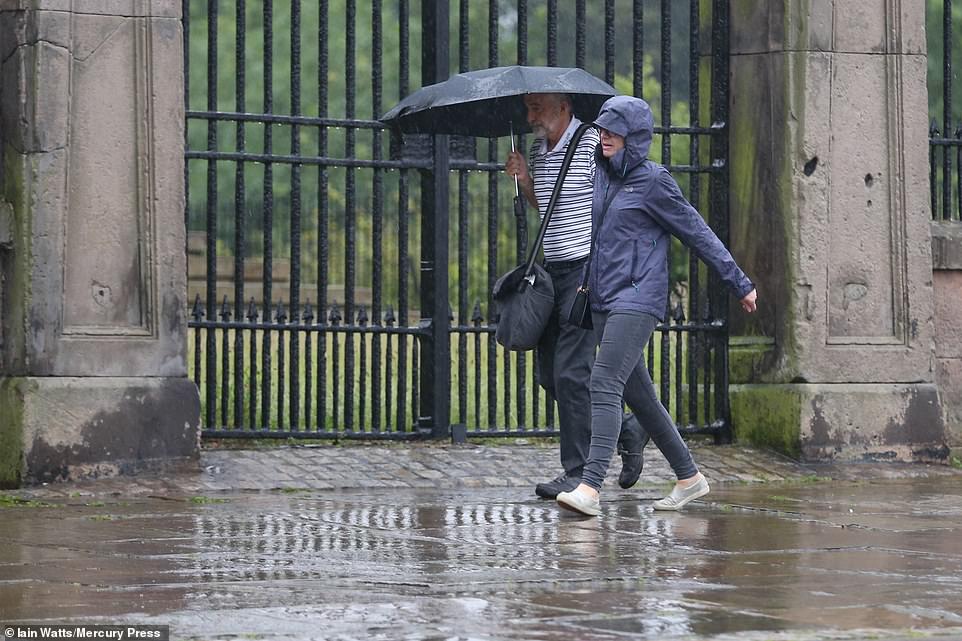 All good things come to an end: People in Liverpool cling on to their umbrellas as they walk the soaked streets this morning 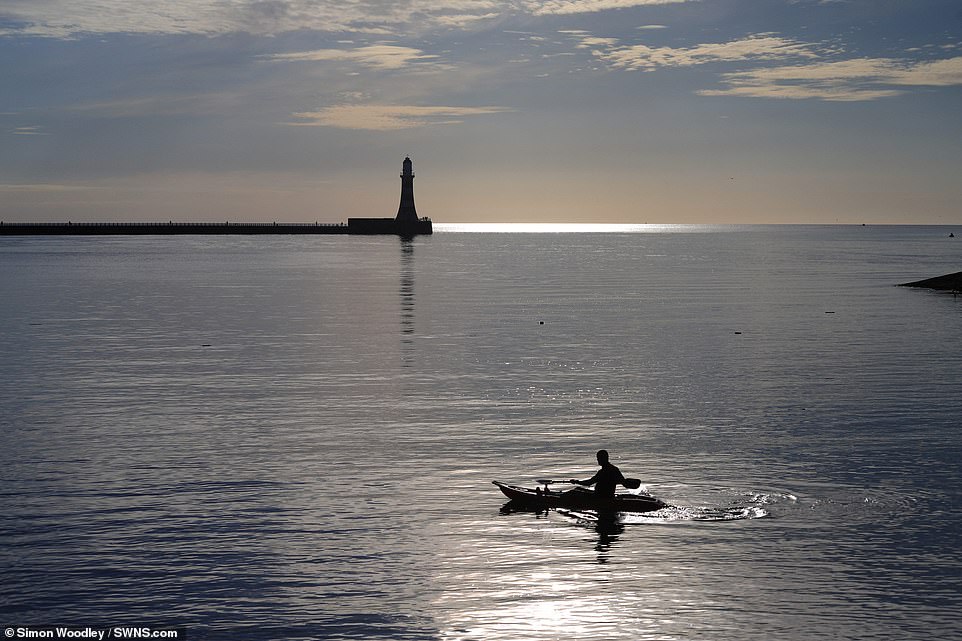 Calm before the storm: A kayaker paddles in front of Roker lighthouse in Sunderland's harbour yesterday as Britain prepares for the start of a 60-hour series of thunderstorms. Torrential downpours could drop up to a month's rain in some places 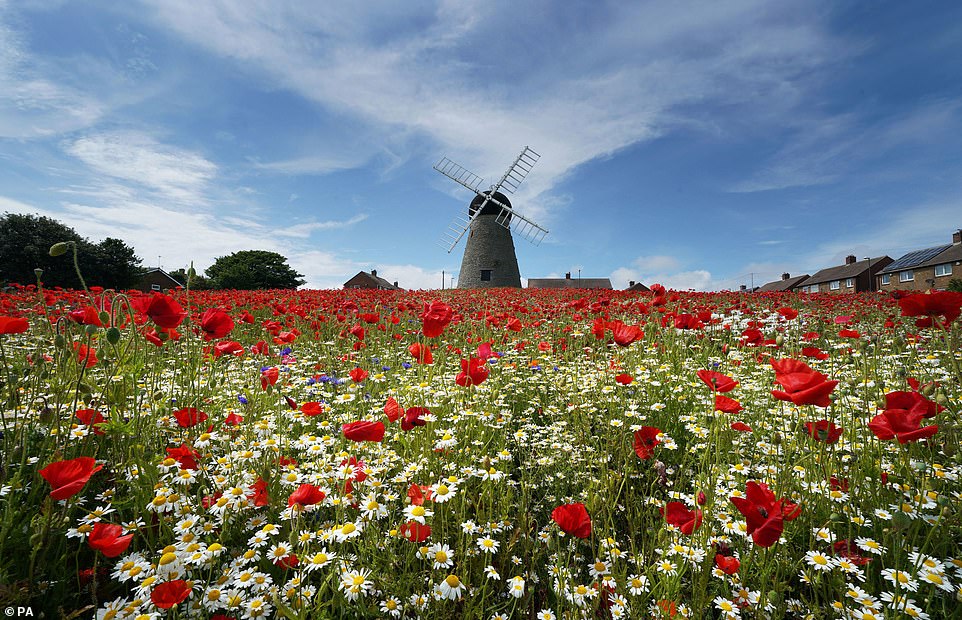 Poppies and wild flowers surround Whitburn Windmill near Sunderland as the north of England enjoys another day of sunshine. By the end of the week, temperatures are expected to soar to 35C and possibly break the current record for June 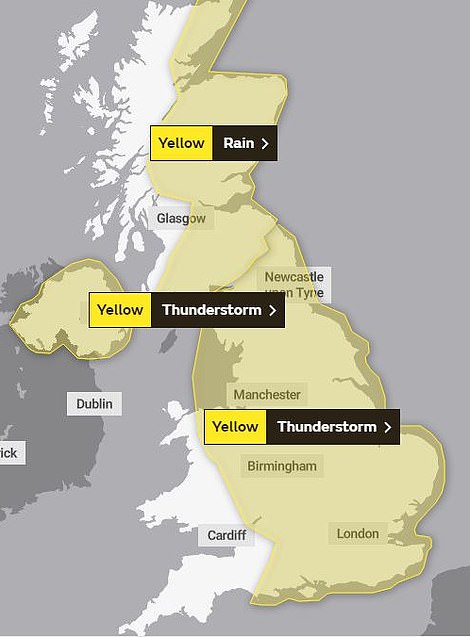 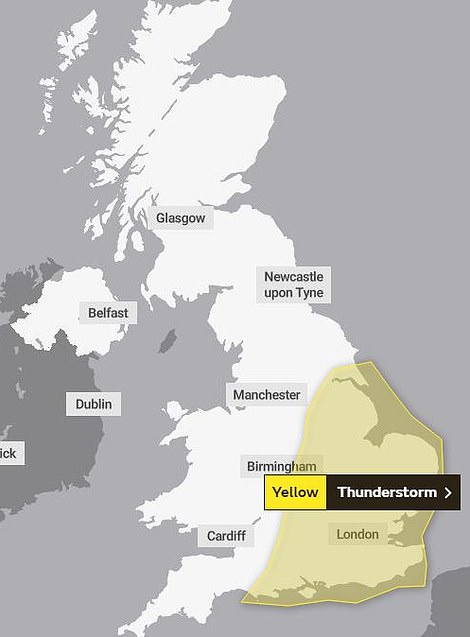 Most of England and part of Scotland and Wales are covered by a thunderstorm warning for Monday, with warnings still in place for the south east on Tuesday 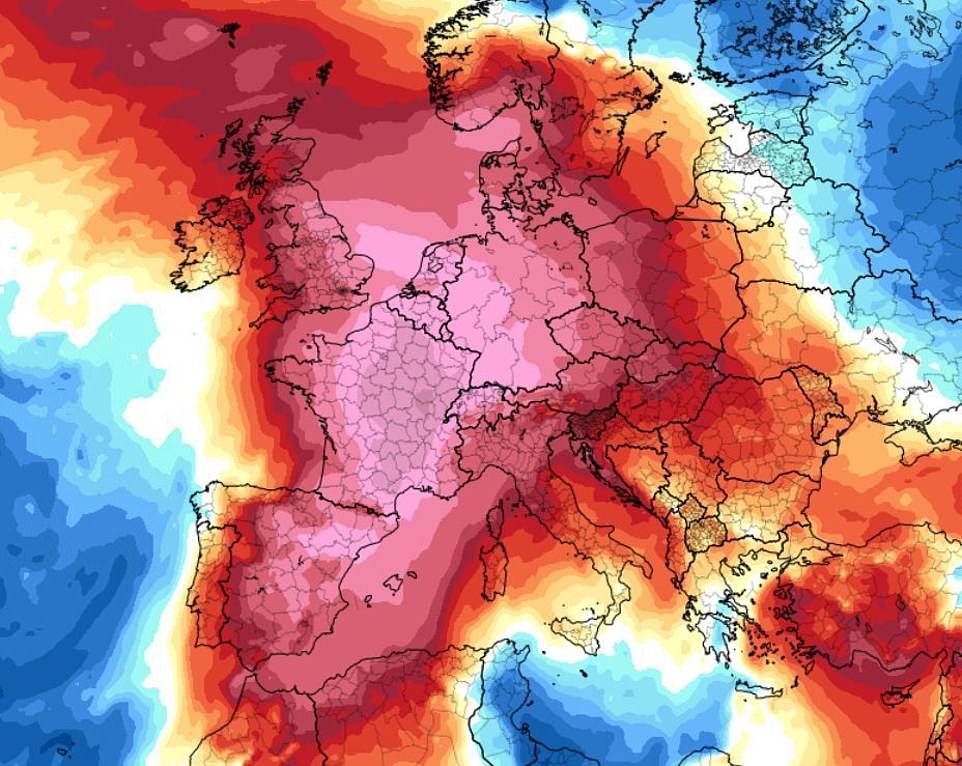 A 2,000-mile wide African air plume is expected to bring Europe a record heatwave - with Britain expected to break through its 35C (95F) June temperature record

The Met Office forecast UK highs building from 28C (82F) on Midsummer's Day (Monday) to nudging 30C (86F) by Thursday and potential for 34C (93F) – and possibly hotter if less cloud – on Friday and Saturday.

Britain will be hotter than Alexandria, Egypt, and Phuket, Thailand, both only due temperatures of 30C (86F).

This week the UK is also expected smash the hottest day of 2019, the 28.8C (83.9F) on June 2, at Weybourne, Norfolk. Northern England, which typically sees cooler temperatures than London and the south is expected to hit 28C (82F).

The first Government heat health warning of the year put hospitals on alert for an increase in admissions and ordered health and social workers to prepare to make daily contact with the ill, vulnerable and elderly.

But the Met Office forecast thunderstorms daily until Tuesday warning of more floods from almost a month's rain in a day 50mm (1.97in) in England and 100mm (3.94in) in Scotland. Showers follow from Wednesday. 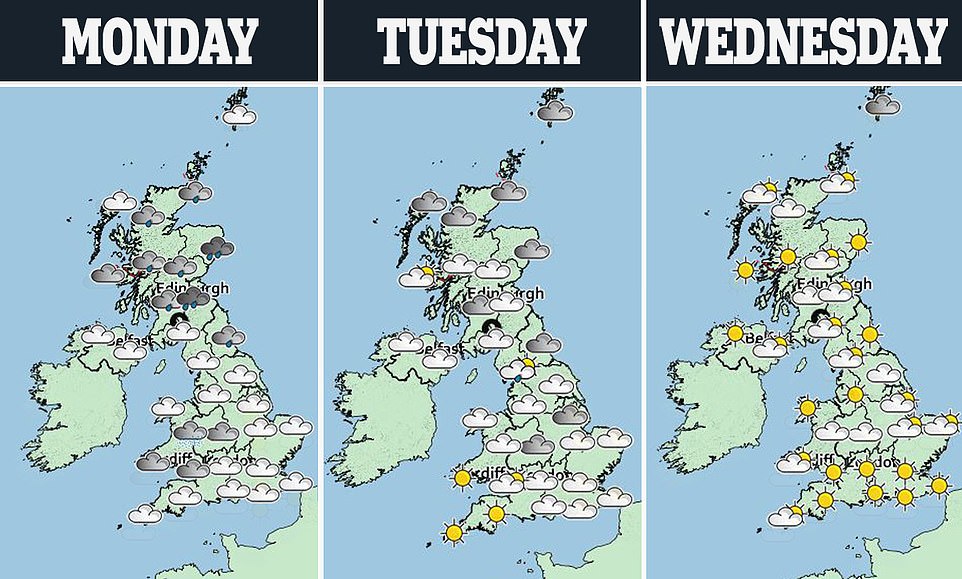 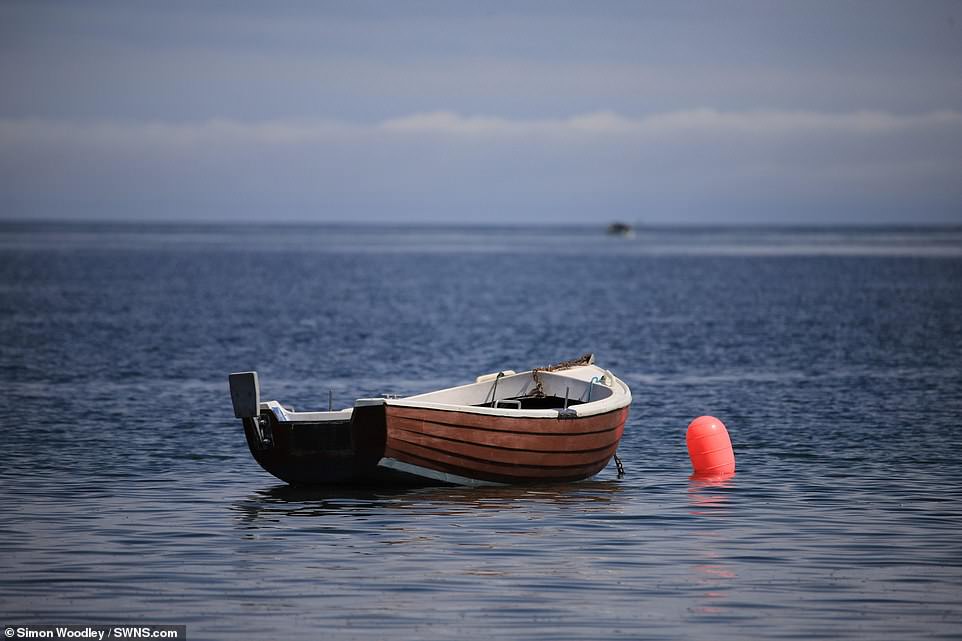 Highs will be hotter than Egypt and Thailand – but sweltering humidity means thunderstorms, more floods and Glastonbury facing mud

Glastonbury, which begins on Wednesday, faces a roast and mud after double the usual rainfall, 91mm (3.6in), has soaked Somerset so far this month.

Despite a wet start, the Met Office said summer is ten times more likely to be much-hotter-than- average than much-cooler-than-average across June, July and August.

Much-hotter-than-usual UK average temperatures are up to 50 per cent probability. Much-cooler-than-normal conditions are just a five per cent chance.

Met Office forecaster Simon Partridge said: 'Warm air from north Africa will bring an extensive heatwave to large parts of western and central Europe, with highs into the 40s (104F) in Germany and France.

'The UK will see highs build through the week after 28C (82.4F) on Monday and Tuesday. By Friday and Saturday sees the chance of 34C (93.2F), and possibly warmer if there is more sunshine and less cloud in the west, which is forecast to be the hottest area. 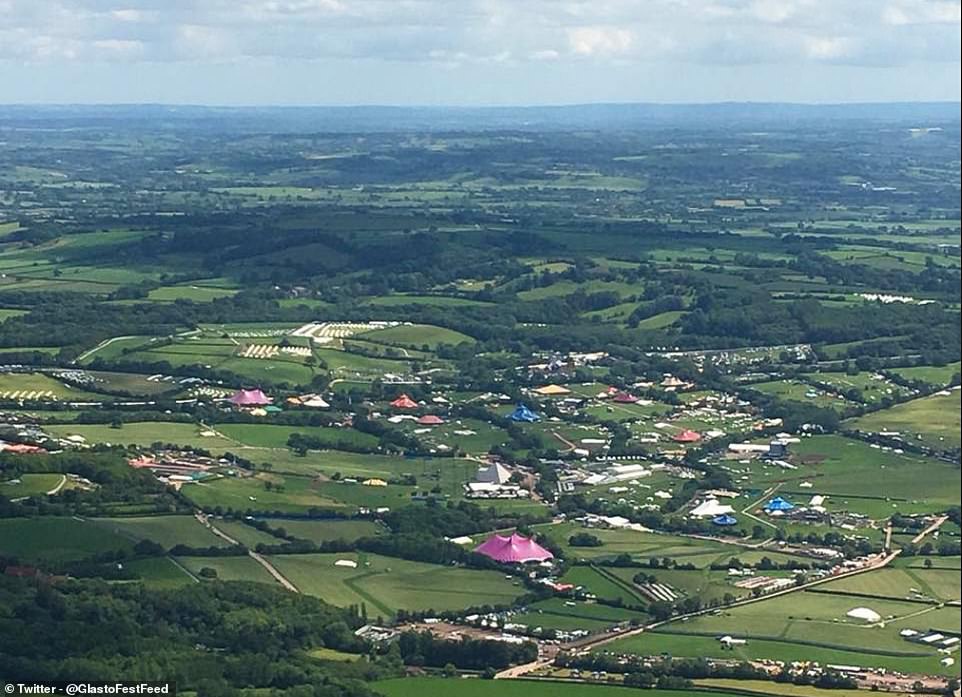 An aerial view of the Glastonbury Festival site, which is expected to be hit by heavy rain tomorrow which provides leave the ground wet in time for the first arrivals on Wednesday morning 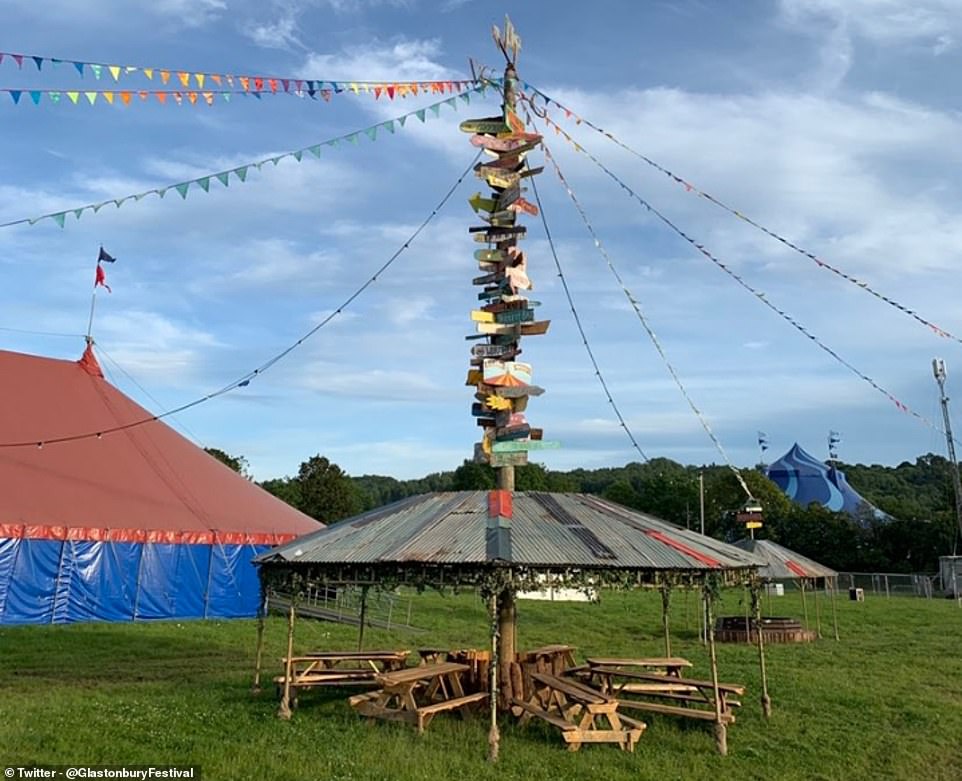 'It will be very humid, with thunderstorms until Tuesday bringing the risk of localised flooding, and showers popping up later in the week.

'Glastonbury has wet ground and risks thundery showers before the festival and occasional showers during the event, but will be in the region with the hottest temperatures - so pack wellies and sun cream.'

Mr Partridge continued: 'An extensive heatwave is on the way for much of the UK for the best part of a week. 'Heat from north Africa will cover a big area of Europe, with up to 41C (106F) in western Germany and France.'

MeteoGroup forecaster Mario Cuellar said: '35C (95F) is a low chance and 33C (91F) is a good chance, with the hottest days on Friday and Saturday.'

The Weather Outlook forecaster Brian Gaze said: 'One of Europe's biggest heat plumes for many years will arrive in the UK, with temperatures possibly over 30C (86F) early in the week, with the hottest conditions later in the week.

'But thunderstorms are expected to be real firecrackers, with flooding expected. Glastonbury risks quagmire conditions.'

The Met Office three-month forecast said: 'For June-August as a whole, the probability UK average temperatures will fall into the warmest of our five categories is 45-50 per cent. The coldest category is five per cent.

'The probability of higher-than-average pressure, associated with warmer-than-average conditions, is increased by North Atlantic sea surface temperature patterns. These are similar to, but not as marked, as last year.'

The Met Office 30-day outlook said: 'Temperatures will continue to feel warm. Temperatures during July 6-20 are likely to be slightly above average.'

Tusk and Juncker lay down the gauntlet to Johnson and Hunt...