Last Updated: 27/07/21 5:42pm Southern Brave are setting the early pace in The Hundred, with Anya Shrubsole's side making it two wins out of two after sweeping aside Welsh Fire thanks to a fine fifty 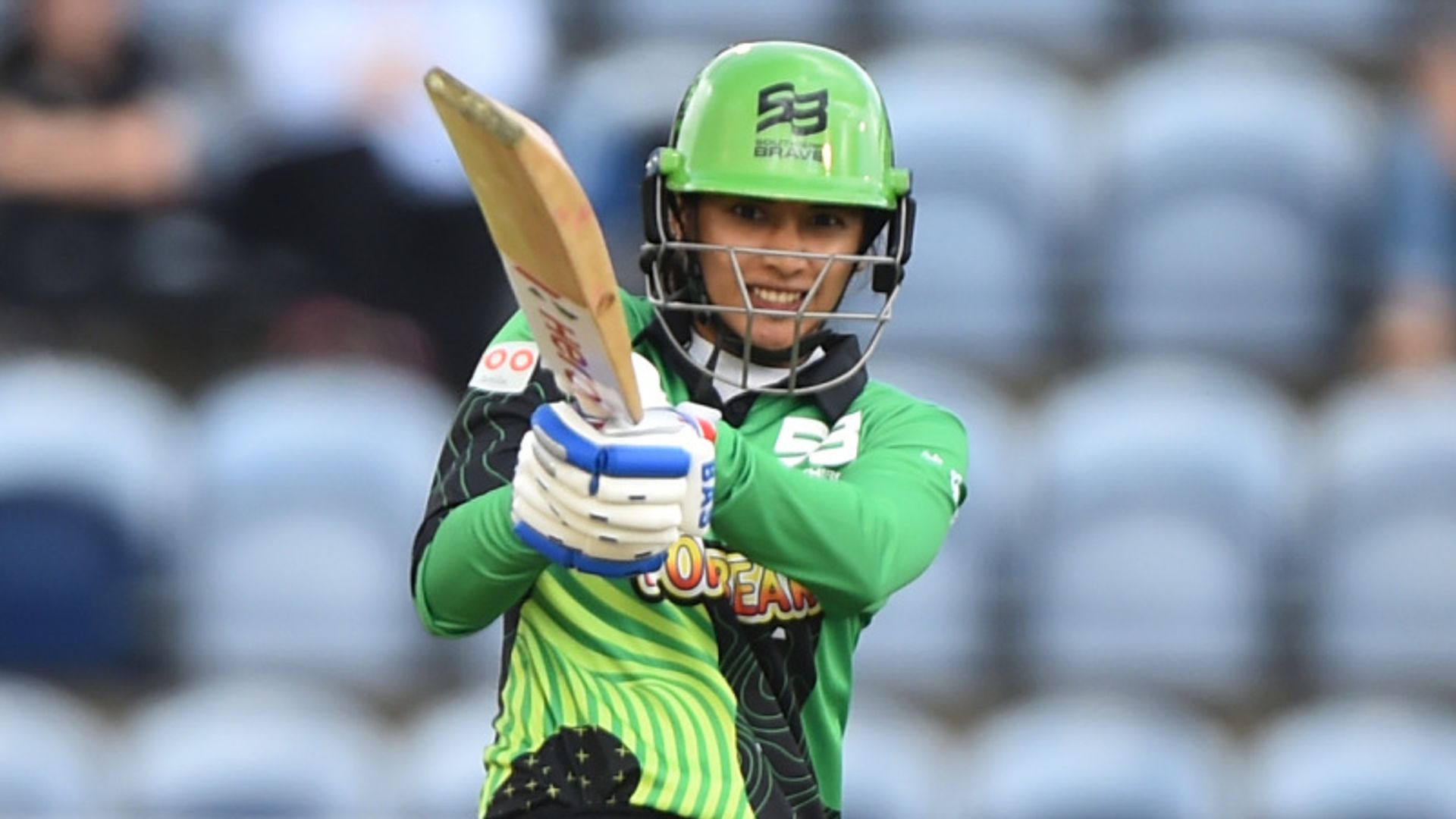 Southern Brave record second straight win in The Hundred as they inflict back-to-back defeats on Welsh Fire; Smiriti Mandhana hits half-century in successful run chase after Lauren Bell impresses for visitors with the ball in Cardiff; no runs for Sarah Taylor but she claims excellent catch

Southern Brave are setting the early pace in The Hundred, with Anya Shrubsole's side making it two wins out of two after sweeping aside Welsh Fire thanks to a fine fifty from Smriti Mandhana and two wickets in two balls for Lauren Bell...

STORY OF THE MATCH

Southern Brave made it back-to-back wins in The Hundred and inflicted back-to-back defeats on Welsh Fire with a comfortable victory on Tuesday afternoon as the tournament hit Cardiff for the first time.

Smriti Mandhana punished Fire for dropping her on 26 by scoring 61 from 39 balls and the match-winning six as the visitors - who beat Trent Rockets in their opening encounter on Saturday - reached their target of 111 with 16 balls to spare.

Brave had earlier limited Fire - beaten by Northern Superchargers in their first match - to 110 from their 100 balls with seamer Lauren Bell ripping the heart out of the innings when she dismissed the free-scoring Hayley Matthews (33 off 20 balls) and Sarah Taylor (0) from the 48th and 49th balls of the match.

One ball after cutting off Mathews' elegant innings by having the West Indian caught at short third on the drive, the Brave seamer pinned Sarah Taylor lbw for a golden duck with a fine in-swinger that beat the inside edge and would, HawkEye informed us, have gone on to clatter leg stump. Fire went from 52-2 to 52-4 in Cardiff and were unable to sufficiently recover.

Still, things would have become very interesting had Mandhana not been dropped by Alex Griffiths in the chase with Brave still needing 54. Griffiths juggled the ball at deep midwicket before it flew over her head and landed on the turf. The batter made the most of her reprieve.

Batting-wise for Brave, Mandhana hit her boundaries in typically aesthetic style, striking four fours and two sixes on her way to a 35- ball half-century and then concluding the game by nailing Bryony Smith for four through the covers and then six down the ground.

Bowling-wise, Bell, obviously, who removed two very dangerous players and conceded just 19 runs from her 20 balls as she backed up her 2-23 against Rockets.

However, neutrals and Fire fans would have been gutted at Matthews' exit with the Barbadian having played some glittering strokes in her score of 43, particularly back-to-back boundaries off Amanda-Jade Wellington over mid-off. The first four in that brace, off the back foot, was simply divine.

Leg-spinner Wellington (2-19 off 20 balls) played a part in Matthews' dismissal, though, with the catch in the off-side in an innings in which she also ran out Fire batter Smith with a direct hit from cover and dismissed Lissy MacLeod and fellow Aussie Piepa Cleary.

Taylor did not affect the scoreboard with the bat, then, but she was as slick as ever with the gloves, particularly when dismissing Danni Wyatt with a brilliant catch down the leg-side while stood up to the stumps to seamer Cleary

If it was anyone other than Taylor you would have been amazed at the quick reactions but, with her, you have come to expect perfection.

Later on, we checked whether Taylor had stumped Mandhana. She hadn't - but the fact she got so close was once again testament to her lightning reactions, which may be unmatched in the sport.

Sky Sports Cricket commentators have long lamented fans being short changed when players are taken off in less than perfect conditions, so fair play to the officials in Cardiff for staying on when the rain began to fall for a while towards the end of the Fire innings, ensuring the fans who had made the trip to Sophia Gardens were not left staring at an empty outfield.

Hero of the Match, Smriti Mandhana: "When I saw Fire bat I thought the wicket was slightly slow but I found it a good wicket to bat on. I think today is all about the bowlers and fielders, nothing to do with the batting.

"Chasing 110 you have to get it as batters so our bowlers and fielders were great. The bowling and fielding unit were the Hero of the Match for me!"

Brave captain, Anya Shrubsole: "It is pleasing to get two wins on the board - it was a clinical performance and we have had a great start.

"I thought we were good in the powerplays with bat and ball. Lauren Bell bowled exceptionally and then the way Danni [Wyatt] started with the bat and Smriti carried on was incredible.

"Lauren is a real weapon for us with the new ball but her coming back and getting Matthews and Taylor was a real turning point and kept them to a total we felt was comfortable to chase."

Sides from opposite ends of the Pennines meet on Wednesday as Manchester Originals host Northern Superchargers at Emirates Old Trafford.

Manchester Originals' women's side and Northern Superchargers' men's team will be looking for their first wins having begun the competition with successive defeats.

Watch The Hundred live on Sky Sports between now and August 21.

Team of the week