Man arrested after one of UK's richest men, 83, was stabbed to death at his £2m Dorset mansion

Millionaire hotelier Sir Richard Sutton, 83, who owns Sheraton Grand in Park Lane is stabbed to death and wife in her 60s suffers knife wounds in attack at their £2m Dorset mansion as man 'known to them' is arrested for murder

By James Robinson for MailOnline

One of Britain's richest men has been found stabbed to death in his country mansion, it was revealed today.

The Baronet - whose family wealth dates back to the Norman conquest and whose property empire is larger than that of the Ministry of Defence - is estimated to be worth £301million.

He recently ranked at number 435 on the Sunday Times Rich List and owned the five-star Sheraton Grand and the luxury Athenaeum - both on London's prestigious Park Lane.

The millionaire landowner has two children, one son and one daughter.

There they arrested a 34-year-old man, known to Sir Richard, on suspicion of murder.

A woman, thought to be his wife, is also believed to have suffered knife injuries in the attack at the home, named Moorhill.

The female victim, who is aged in her 60s, was airlifted to the Southmead Hospital in Bristol. Her condition was today described as 'critical'. 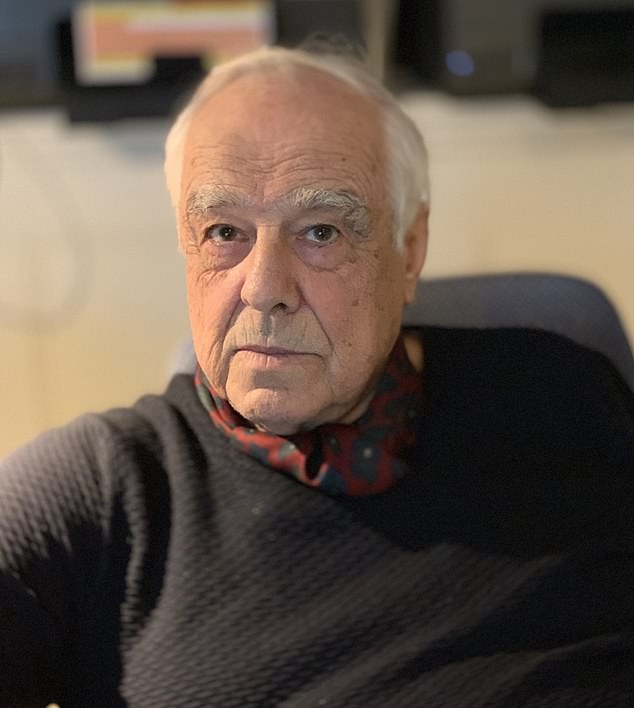 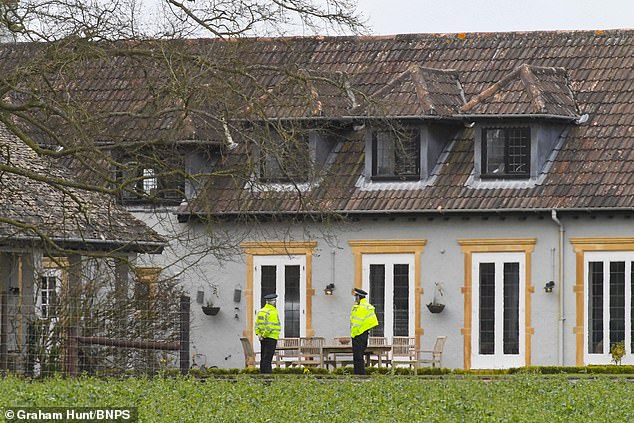 Police rushed to the scene after receiving a call from a member of the public concerned for the welfare of the occupants of the house. Pictured: Police at the property today 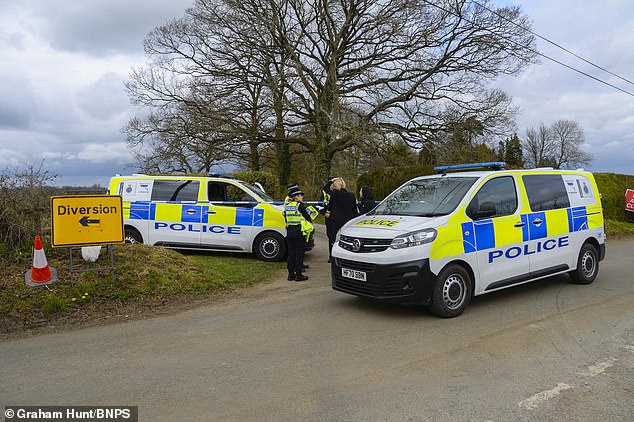 A woman, believed to be his wife, also suffered knife injuries in the attack at the home, named Moorhill. Pictured: Police at the scene today 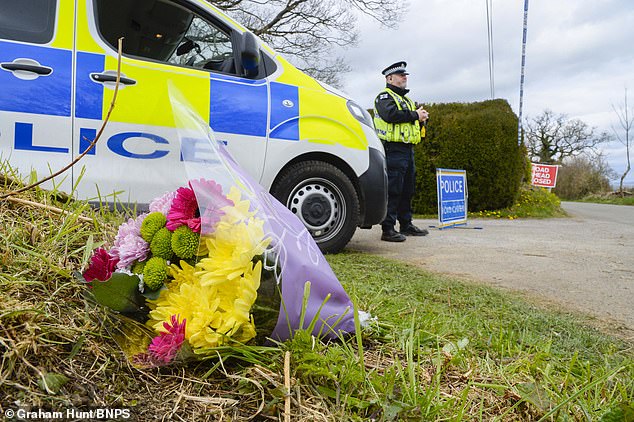 The property is a large detached home in a tiny hamlet, near Gillingham, Dorset. Pictured: Flowers left at the scene today, as police continue their investigation 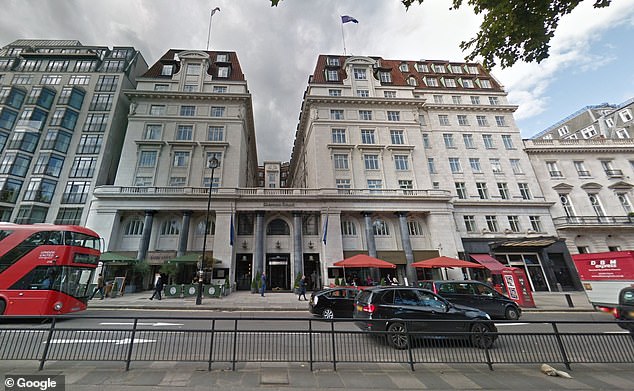 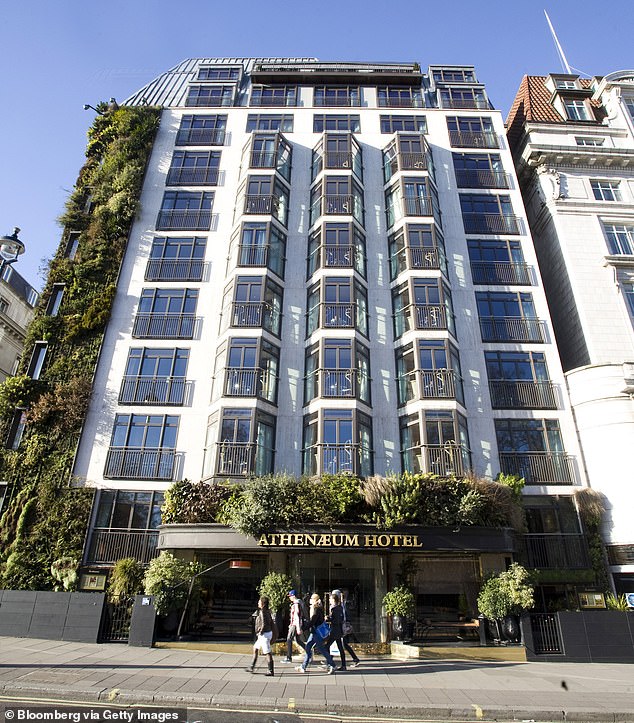 The 34-year-old suspect meanwhile was subsequently taken to hospital for treatment to injuries that are not believed to be life-threatening.

Sir Richard was described as an 'old English gentry landowner' who was worth an estimated £301m and was at number 435 on the Sunday Times Rich List.

He owned a huge portfolio of hotels, property and farms across the country.

'Sir Richard was a caring, generous and warm family man, who genuinely regarded those who worked for him as part of his extended family.

'Sir Richard was passionately devoted to both his company and its people, setting the highest and standards for quality in the hotels, farming and property interests within the group.

'His loss will be felt by everyone within the company, those who worked with him, and his family who have lost an incredible individual. Our thoughts are with the Sutton family at this tragic time.'

Sir Richard bought the Moorhill country estate in 2014 for £1.4million. 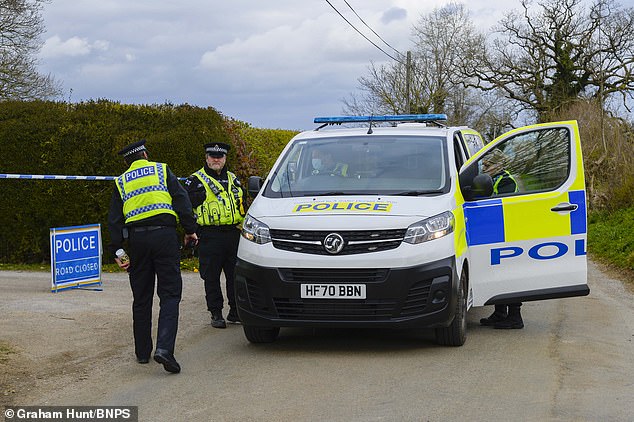 Today three police vans were seen at the entrance to a long drive which leads to the remote property, while forensics officers were observed inside 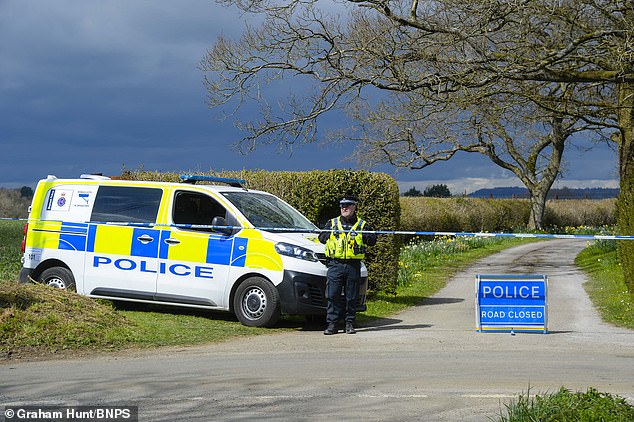 Sir Richard Lexington Sutton, 9th Baronet, was head of the Sutton family, which owns land in Dorset, Berkshire, London and Lincolnshire and Aberdeenshire. Pictured: Police had taped of the entrance to the property earlier today 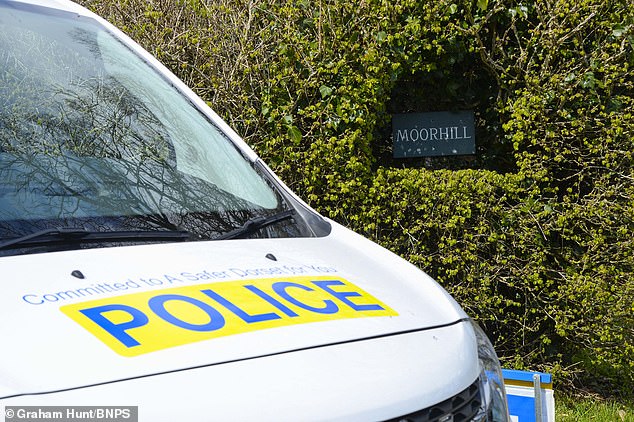 A police van was parked at the entrance to the Dorset property earlier today, as they investigated the incident

Today three police vans were seen at the entrance to a long drive which leads to the remote property, while forensics officers were observed inside.

A neighbour said: 'The Suttons live there. They have two grown up children and grandchildren.

'It is just awful. You would never imagine something like this could happen. They are lovely people.'

A local farmer said: 'I saw a search helicopter with a spotlight overhead last night and then an air ambulance landed.

'The people who live there is an old English gentry landowner and his wife.'

Another neighbour said they were aware of police helicopters flying over the house for a number of hours.

Their family has been informed and the Dorset coroner has been notified of the death.

Detective Inspector Simon Huxter, of Dorset Police's Major Crime Investigation Team, said: 'Our thoughts are with the family of the man who sadly died and the injured woman at this extremely difficult time and they are being supported by specially-trained officers.

'We will be carrying out a full investigation to establish exactly what happened at the address in Higher Langham and I would appeal to anyone who saw or heard anything suspicious in the area on the evening of April 7 to please contact us.

'A cordon remains in place at the address and there will continue to be a heavy police presence in the vicinity as we carry out enquiries.

'Officers can be approached by members of the public with any information or concerns.'

Sir Richard Lexington Sutton, 9th Baronet, was head of the Sutton family, which owns land in Dorset, Berkshire, London and Lincolnshire and Aberdeenshire. 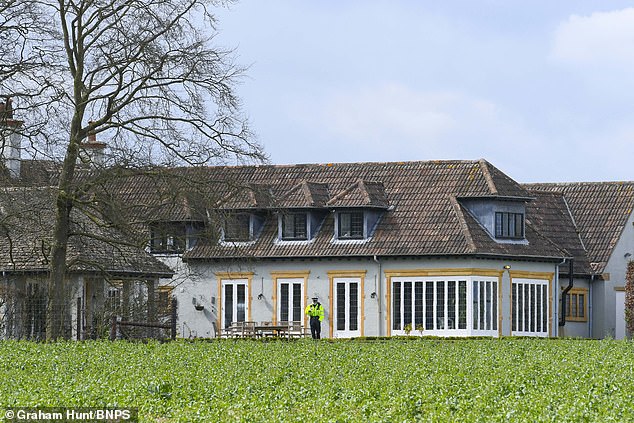 Sir Richard inherited his title and estate from his father in 1981 and was worth an estimated £301m in May 2020, placing him 435th on the Sunday Times' Rich List. Pictured: Police at the scene today 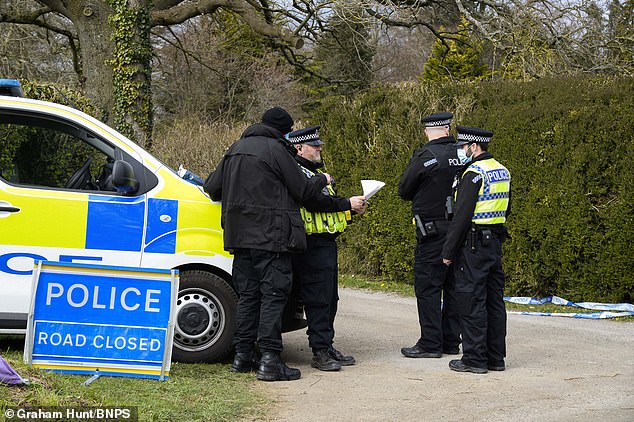 In total he and his family own close to 7,000 acres of land across the UK - more than double the amount owned by the MoD. Pictured: Police at the scene earlier today 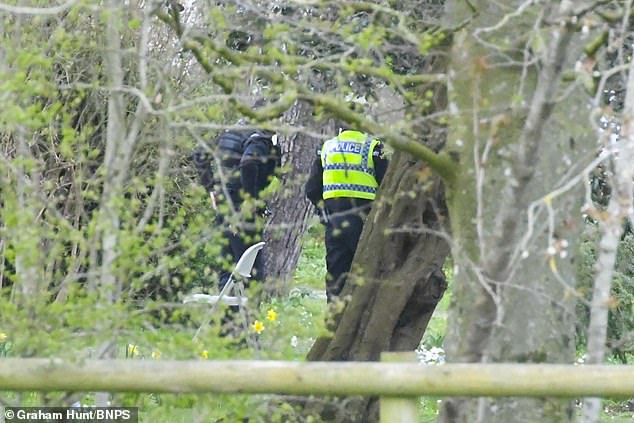 Officers were earlier today seen searching a wooded area of the estate, near to Gillingham in Dorset

In total he and his family own close to 7,000 acres of land across the UK - more than double the amount owned by the MoD.

He married wife Fiamma in 1959. The couple had two children, David, 61, and Caroline, 55, and five grandchildren.

Today local MP Simon Hoare, who knew Sir Richard Sutton well, paid tribute to the landowner who he said was a 'country gentleman'.

The Conservative MP for North Dorset described the incident as 'deeply awful' and said he received a 'full briefing' on it from police today.

Mr Hoare MP, 51, said: 'I knew him, strangely enough I knew him before I was an MP as my company did a lot of work for his estate many years ago.

'He was a charming man, he had a very good sense of humour, he was politically astute and genial.

'If you wanted to conjure up a picture of a country gentleman then that was him.

'It is a huge loss for his family in what is clearly deeply awful circumstances.'

'Based on what I have been told by the police there is cause for shock and sadness but no cause or reason for alarm.'

The politician added that he is hoping medics are able to help save the injured woman in her 60s as 'one murder is shocking but a double murder would be chilling'.

Mr Hoare MP said he would not disclose details about the circumstances of the incident nor the identity of the 34 year old man who has been arrested.

Will you suffer a 'horrible shock' at retirement? How to build a decent pension

Five including doctor and two children shot dead in South Carolina before police...

Jet2 vows to prosecute Stansted woman who 'tried to storm...

HEALTH NOTES: Milk's the cool way to turn off the heat

Trump says US 'cocked & loaded' on Iran, but death toll... 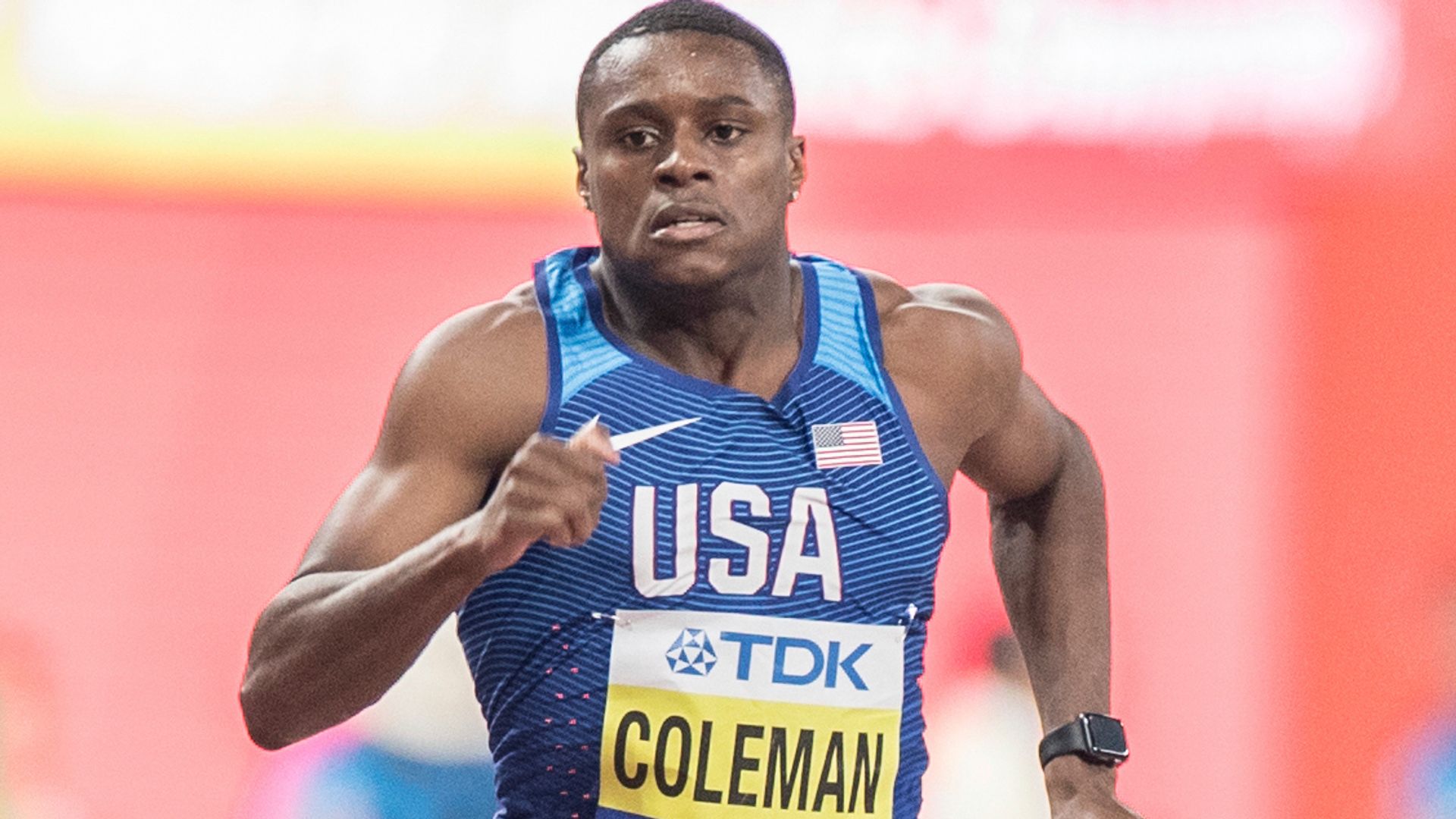 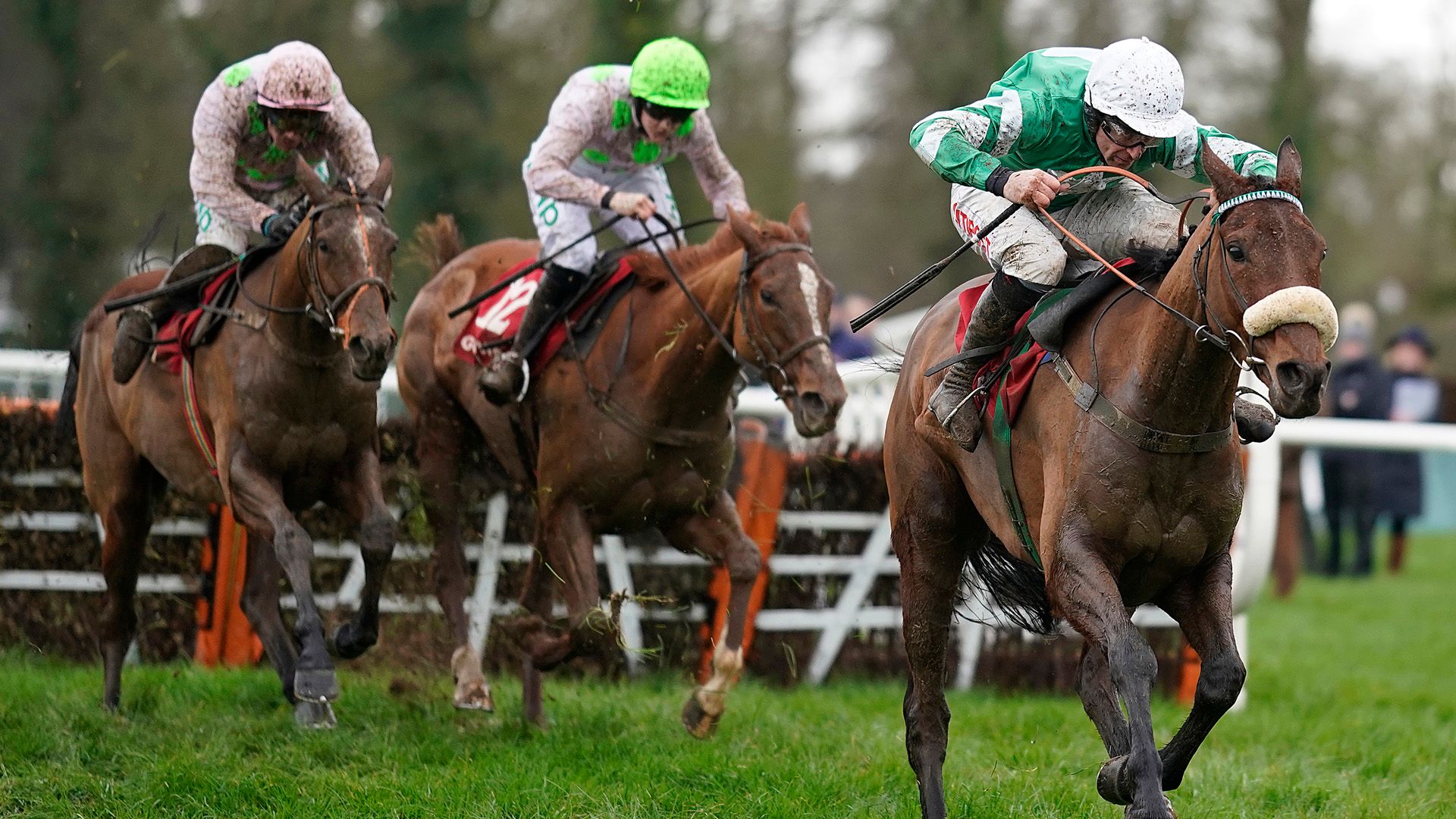 A total of 600 people in the UK have now contracted the South African coronavirus...