Leo Varadkar says there is 'enormous hostility' to Brexit delay

'We have run out of patience': L

'We have run out of patience': Leo Varadkar warns Tory leadership contenders there is 'enormous hostility' in EU to granting a further Brexit delay as UK is told it will be 'diminished' by leaving

Leo Varadkar has warned the Tory leadership contenders that there is 'enormous hostility' among EU member states to granting another Brexit delay as he claimed the bloc's patience was running out.

The Irish Taoiseach also said the divorce deal agreed with Theresa May was the only one on offer as he cautioned her successor against trying to seek changes.

His comments put the EU on a collision course with the men battling to win the keys to Number 10, with all the remaining candidates having committed to renegotiating the current agreement.

It came as Mark Rutte, the Dutch prime minister, claimed Britain would be left 'diminished' if it leaves with or without a deal.

Mr Rutte said a 'hard Brexit' or a 'normal Brexit' would harm the UK and that a bad outcome was 'unavoidable'.

European leaders are meeting in Brussels today to hammer out who should be appointed to a raft of top jobs in what will be Mrs May's final EU summit before she is replaced.

Mrs May would not be drawn on whether she would miss attending the events when she addressed reporters upon her arrival. 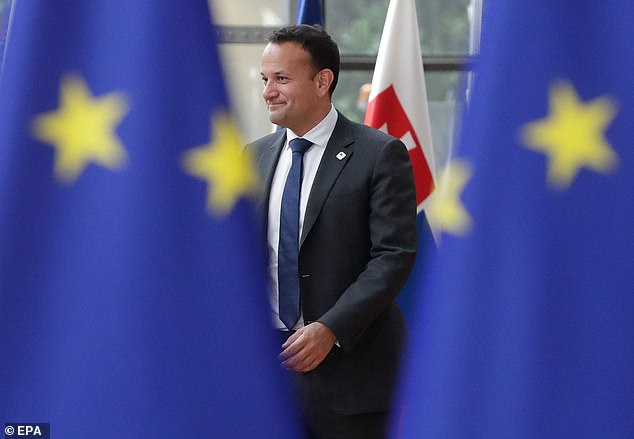 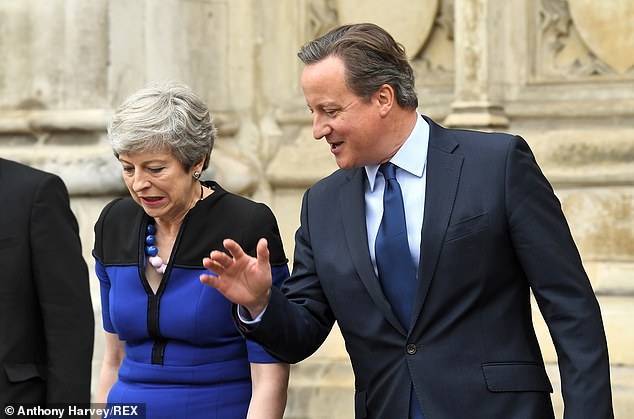 Theresa May, pictured today alongside David Cameron, went to the EU summit after attending a service of thanksgiving for Lord Heywood, the former cabinet secretary, at Westminster Abbey

Trips to the Belgian city have defined much of her premiership as she struggled over the last two years to agree a deal with the bloc.

Mr Varadkar delivered a Brexit warning as he arrived at the summit, telling reporters: 'There's very much a strong view across the European Union that there shouldn't be any more extensions.

'While I have endless patience, some of my colleagues have lost patience, quite frankly, with the UK and there's enormous hostility to any further extension.

'So, I think an extension could only really happen if it were to facilitate something like a general election in the UK or perhaps even something like a second referendum if they decided to have one.

'What won't be entertained is an extension for further negotiations or further indicative votes: the time for that has long since passed.'

Mr Varadkar said he was looking forward to meeting Mrs May's successor but warned that the Withdrawal Agreement would not be reopened.

'There are a number of things which we have very much agreed and this was the outcome of my discussion with (Michel) Barnier and his taskforce today,' he said.

'First of all is that there will be European unity, that negotiations can only happen between the EU and UK in the EU - we're not going to allow negotiations to be moved to an intergovernment level in any way.

Meanwhile, Mr Rutte said the next prime minister needed to realise Brexit would have a detrimental effect on the UK.

He told the BBC: 'With a hard Brexit, even with a normal Brexit, the UK will be a different country.

'It will be a diminished country. It is unavoidable.' 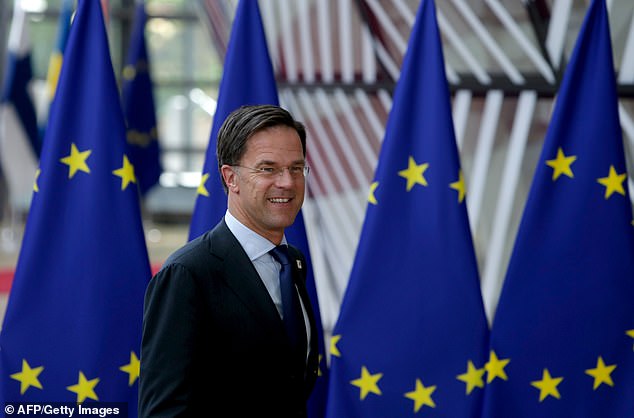 Mark Rutte, the Dutch PM, has been ally of the UK during Brexit talks but today he claimed Britain would be 'diminished' by leaving the bloc

'If there are no changes in all the positions, I cannot see why it makes any sense to negotiate longer,' he said.

Mrs May said the UK would continue to play a 'constructive role' within the EU for as long as it remains a member as she refused to be drawn on whether she would miss the events.

She said: 'This is certainly the last scheduled European Union council that I will be at.

'I will continue to do what we have always done as the UK which is to play a constructive role in the European Union while we are part of the discussions around the table.

'But of course in the future the UK will be taking a different role because we will be outside the European Union. 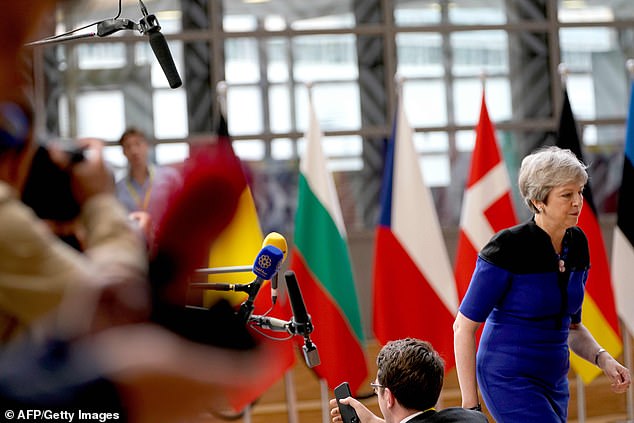 'We will be forging that way as global Britain, an independent, sovereign state, but we will be dealing with many of the same challenges which we will be talking about today such as climate change and external relations.'

The 28 leaders of the EU's member states have been called to today's summit to decide who should lead the union for the next five years.

But the mainstream parliamentary groups have yet to agree on a programme or on their candidate to replace Jean-Claude Juncker as the president of the European Commission.

Rifts between France and Germany over who should be appointed mean the decision is likely to be far from straight forward.

Mother-of-13 reveals she feeds her family for just 66 pence...