'When I first heard something Ko

'When I first heard something Korean had exploded in America, I got worried': Comedian Jimmy Carr sparks international outrage with joke about K-pop act BTS in 'racist segment' on Australian TV

Carr mocked the band while appearing on Australian TV show '20 to One' in a segment which has been accused of being 'racist' by viewers.

'When I first heard something Korean had exploded in America, I got worried,' British comedian Jimmy Carr joked on the show.

'So I guess, it could've been worse - but not much worse,' he added, as footage of the group performing was shown.

It comes as the controversial Channel 4 star was slammed for saying that dwarfs were 'abortions which made it' during his Terribly Funny stand-up tour. 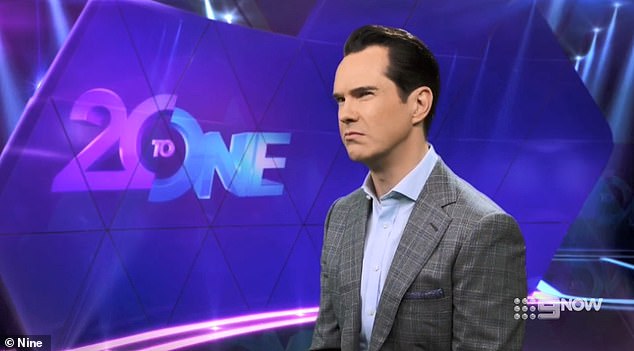 In fact, the widespread outrage over the two-minute segment led television news bulletins across the East Asian country on Thursday, after thousands of BTS fans flooded Twitter with complaints about the program's 'xenophobic' overtones.

The free-to-air network was also a trending topic on Twitter in both Australia and Korea, with the hashtags '#channel9apologize' and '#channel9racist' going viral.

One BTS fan summarised the outrage by tweeting: 'Literally every sentence said in this video is problematic and is filled with racial undertones and xenophobia.

'Dear 20 to One, you should definitely reflect and apologise for this disgusting, misinformed report about BTS.'

'Apologise to BTS, you coward,' another person wrote, this time tweeting directly to 20 to One host Erin Molan herself. 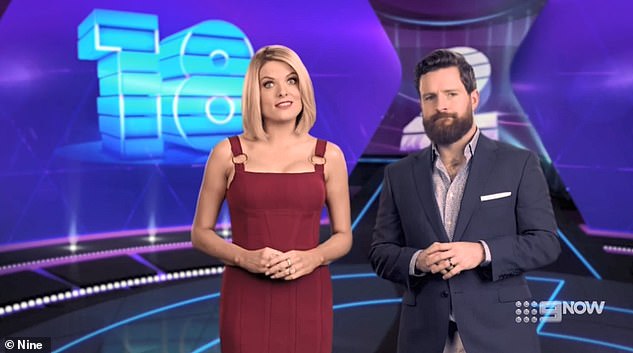 The backlash continues: A segment on Channel Nine's 20 to One that mocked K-pop band BTS has sparked international outrage, becoming the biggest news story in South Korea overnight. Pictured: 20 to One hosts Erin Molan and Nick Cody 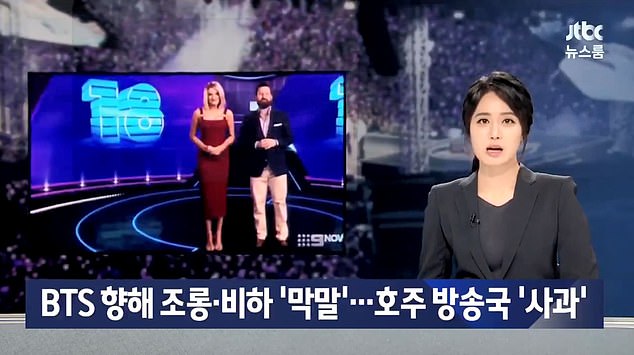 Outrage: The free-to-air network was a trending topic on Twitter in both Australia and Korea overnight, with the hashtags '#channel9apologize' and '#channel9racist' going viral

Furious: One K-pop fan wrote on Twitter, 'If your idea of humour is demeaning an artist's career and ideology by making them look shallow and superficial, while making disgusting and inappropriate comments, then you have failed pathetically. You should be ashamed' 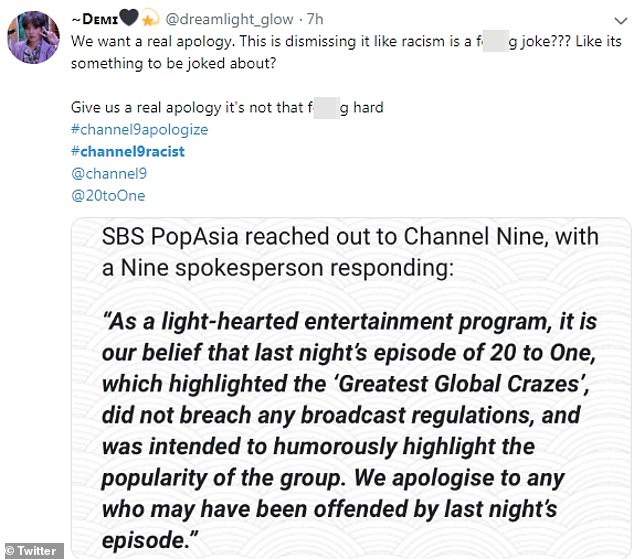 Not backing down: After Nine issued a statement to SBS PopAsia stating that the 20 to One segment 'did not breach any broadcast regulations', K-pop fans demanded a 'proper apology'

K-pop fans also labelled the network 'racist', with the hashtag #Channel9Racist being included in more than 17,400 tweets as of Thursday night.

One person tweeted: 'If your idea of humour is demeaning an artist's career and ideology by making them look shallow and superficial, while making disgusting and inappropriate racist comments, then you have failed pathetically. You should be ashamed.'

The problematic 20 to One segment had repeatedly mocked BTS, beginning with Erin introducing them as 'the biggest band you've never heard of' before an awkward reference to North Korean dictator Kim Jong-un was made. 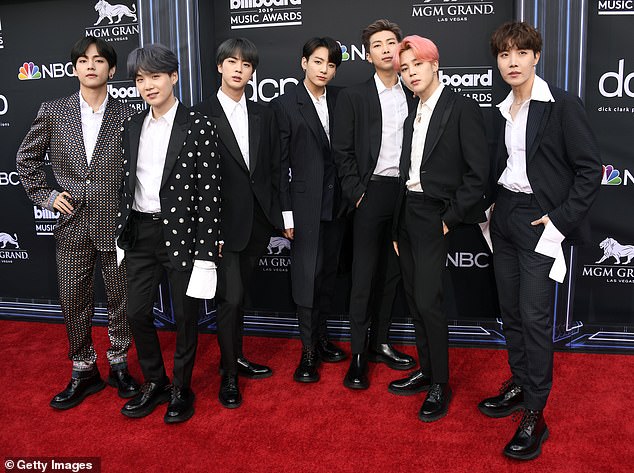 'Literally every sentence said in this video is problematic and is filled with racial undertones and xenophobia': The 20 to One segment was slammed by K-pop fans on Twitter, eventually attracting global news coverage. Pictured: BTS band members in Las Vegas on May 1, 2019

Getting personal: 'Apologise to BTS, you coward,' one BTS supporter wrote, this time tweeting directly to Erin herself

Several celebrity guests and comedians then made snarky and disrespectful comments about the band.

Erin then expressed surprise at the group's chart-topping success in America, because 'only one band member actually speaks English'.

Former Australian Idol star Rob Mills also took a swipe at the group's singing abilities as 20 to One played an out-of-context clip of BTS member Jimin's voice cracking on stage during a performance.

Comedian Mel Buttle later suggested that BTS should fire four of their seven members, because she felt that there were too many of them.

While playing a clip of BTS discussing their philanthropic efforts in a speech to the UN last year, the pair joked that they must have been speaking about 'hair products'. 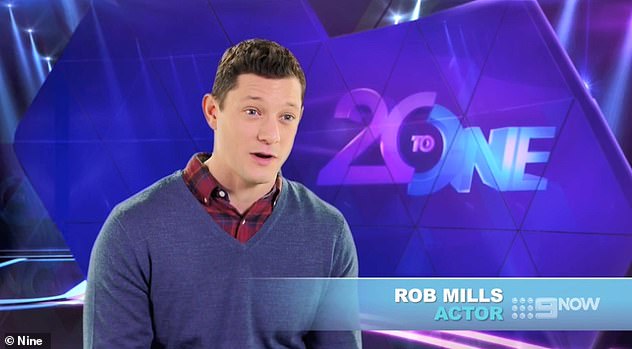 BTS partnered with UNICEF in 2017 to launch a two-year campaign to stop violence against children. So far, the campaign has raised almost AUD$3million.

Channel Nine defended the segment in a statement to SBS PopAsia on Thursday.

'As a light-hearted entertainment program, it is our belief that last night's episode of 20 to One, which highlighted the Greatest Global Crazes, did not breach any broadcast regulations, and was intended to humorously highlight the popularity of the group,' a spokesperson said.

'We apologise to any who may have been offended by last night's episode.' 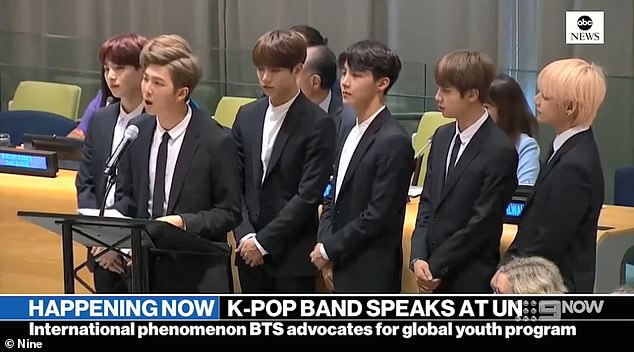 Low blow: The show mocked BTS' philanthropic work with the United Nations, joking that the boys must have been discussing 'hair products' while addressing the UN last year

That same day, 20 to One issued an apology in both English and Korean via Twitter, which read, 'We apologise for any disrespect and offence taken'.

But this didn't stop the swell of anger against the network, with hundreds of BTS fans continuing to demand a public televised apology from Erin and Nick.

'Make a public apology on TV,' one person tweeted, while another added: 'They did it wrong on TV, so the apology should be on TV too.' 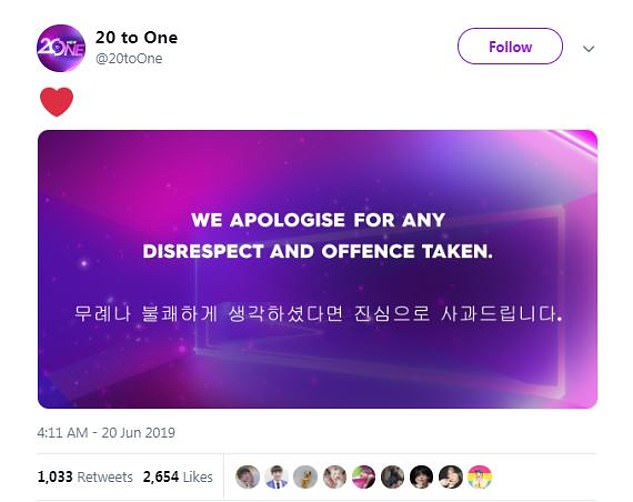 Too little, too late? On Thursday, 20 to One issued an apology in both English and Korean via Twitter, which read, 'We apologise for any disrespect and offence taken' 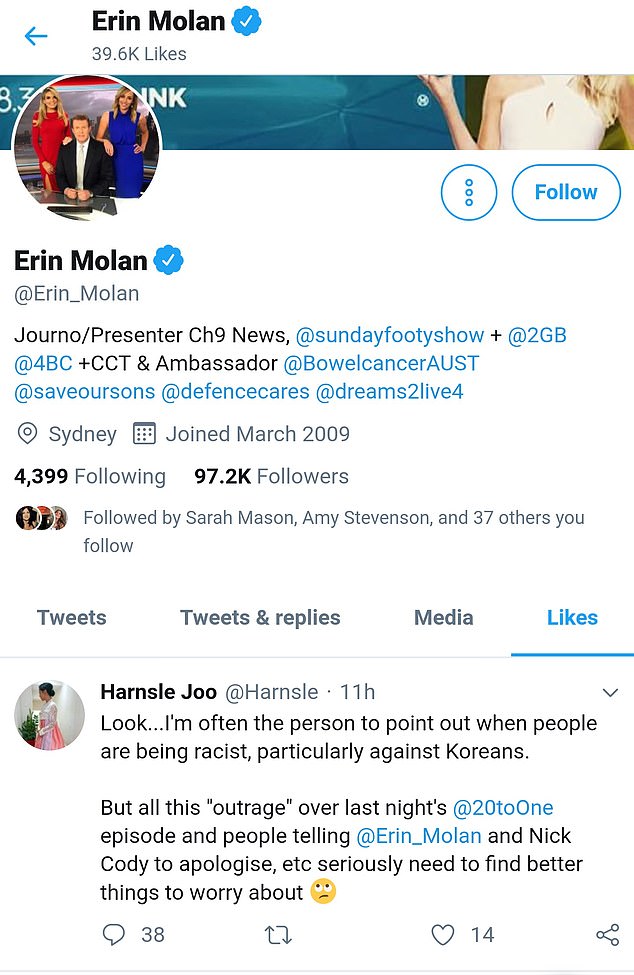 'Find better things to worry about': Despite 20 to One apologising for the segment, Erin's Twitter likes suggest she doesn't actually regret her comments

Despite 20 to One apologising for the segment, Erin's Twitter likes suggest she doesn't actually regret her comments.

One tweet Erin liked read: 'Look... I'm often the person to point out when people are being racist, particularly against Koreans.

'But all this 'outrage' over last night's @20toOne episode and people telling @Erin_Molan and Nick Cody to apologise etc. seriously need to find better things to worry about.'

Likewise, one of the comedians featured in the segment, radio presenter Tim Blackwell, openly mocked the outrage on Twitter.

He tweeted, 'Touched a BTSnerve', sparking a fresh wave of backlash against him.

In response to Tim's tweet, a K-pop fan wrote: 'It's more than just BTS. You could have substituted any other group and we would still be offended.

'As an Asian, I'm offended. It's sad to think in 2019, adults such as yourself have no concept of how hurtful your 'jokes' can be.' 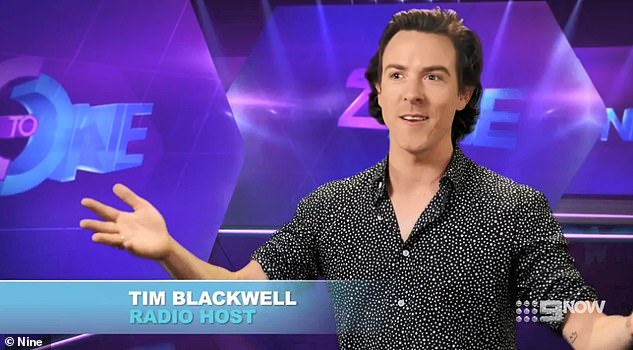 No regrets? One of the comedians featured in the segment, radio presenter Tim Blackwell (pictured), openly mocked the outrage on Twitter 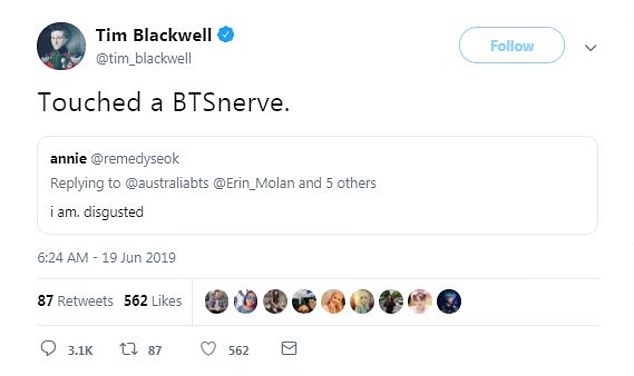 Bad move: Tim tweeted, 'Touched a BTSnerve', sparking a fresh wave of backlash against him

Rob Mills - the singer and actor who ridiculed Jimin's vocal abilities in the 20 to One segment - did issue a sincere apology, however.

In a video shared to his Instagram Story on Thursday, Rob acknowledged that his remarks were unfair and ignorant.

'So I've had a chance to look up BTS. And they are incredible singer-songwriters [and] successful,' he said.

'They do incredible philanthropy work and charity work and should be applauded.

'I feel like my words [on 20 to One] may have been taken out of context, guys. I just had no idea who they were before. But now I know.

'They're great, they do incredible work and they have a legion of awesome fans. So, sorry if I offended anybody... keep up the good work, guys.' 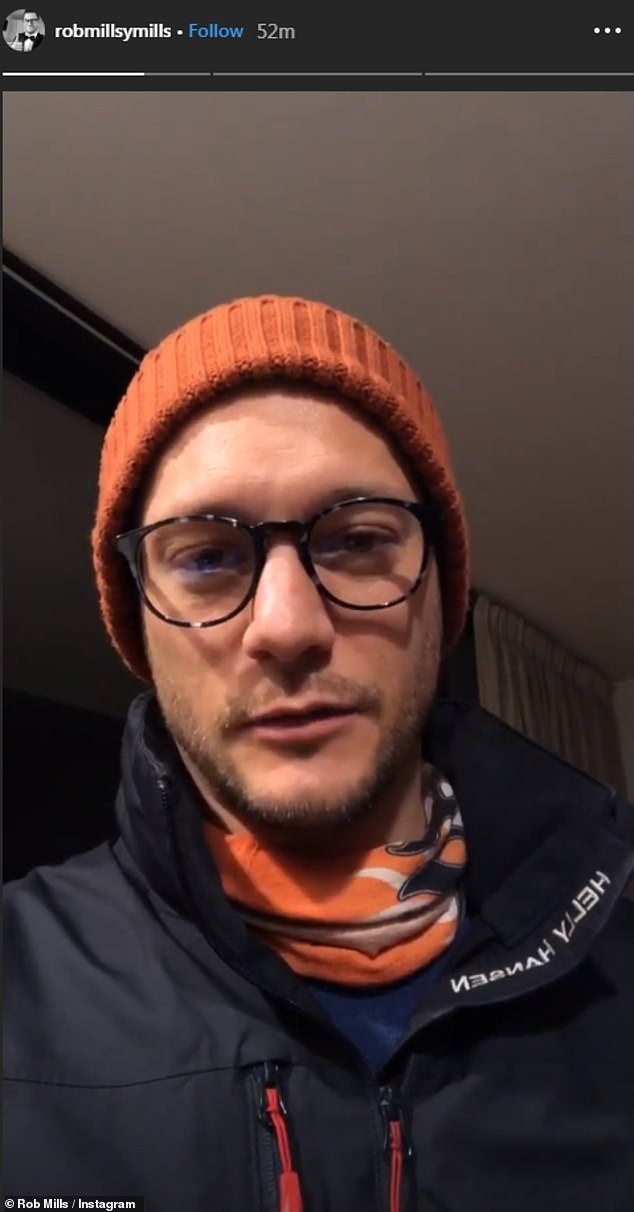 Backtracking: Rob Mills - the singer and actor who ridiculed Jimin's vocal abilities - did issue a sincere apology, however, saying his remarks on 20 to One were unfair

Meanwhile, it's not the first time Channel Nine has been in hot water with K-pop fans.

On Sunday, the network used footage of Korean girl group BLACKPINK's Sydney concert from the day before in a news story about an unrelated drug bust.

The segment, which aired on Nine News, was about five people who had been arrested on drug supply charges at the I AM HARDSTYLE dance festival, which took place at Olympic Park over the weekend. 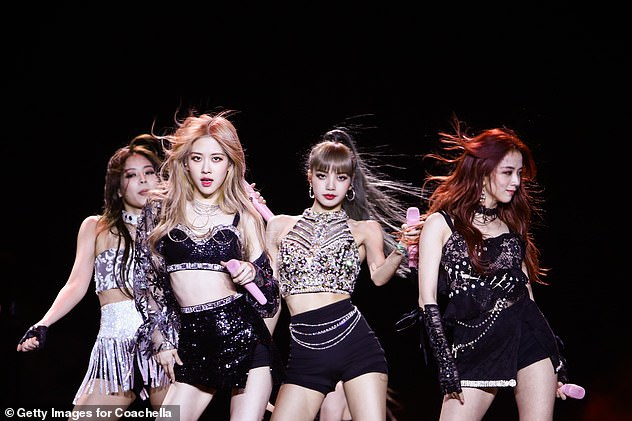 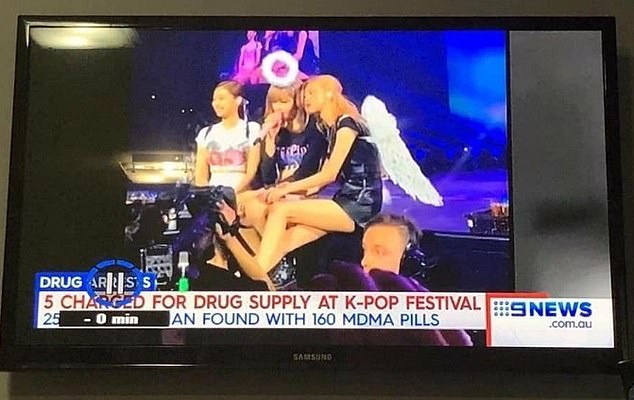 'Poor journalism and lack of integrity': Fans were outraged to see the beloved girl group wrongfully implicated in a drug bust

BLACKPINK's army of fans took to Twitter to criticise the network for using video of the band's performance in the news bulletin, labelling it 'disgraceful' journalism.

'Poor journalism and lack of integrity,' one fan tweeted. 'What they reported did NOT happen at a BLACKPINK concert.'

'Using BLACKPINK's concert video clips saying that people were using drugs, when in fact it was in another stadium with a rave party is disgraceful,' wrote another.

The South Korean group have been called 'the world's biggest boy band'.

Three of their albums have reached No. 1 on the Billboard 200 chart.

They're the first group since The Beatles to earn three number one albums in less than a year on the Billboard charts. 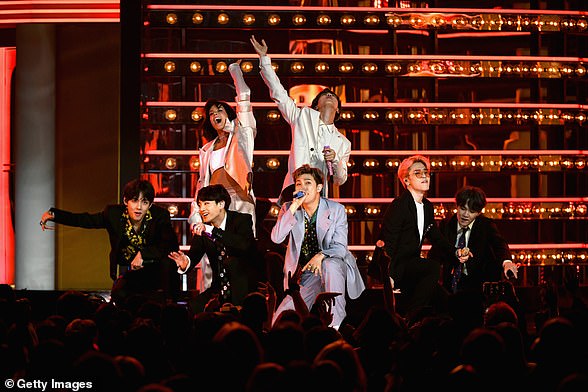 More than half of MPs claim free BBC licence at taxpayers'...

Boris Johnson is caught wearing his socks inside out at...

Surprising research shows modern life is not as rushed...

Michael Jackson is at peace in the afterlife, says Hollywood...