Who do you trust? Jeremy Hunt as

Who do you trust? Jeremy Hunt asks if UK can have faith in Boris as both Number 10 rivals prepare to face questions at first hustings today

By James Wood For Mailonline

Jeremy Hunt has asked whether the UK can have faith in Boris Johnson, as both prepare to face questions at their first hustings today.

The Foreign Secretary, 52, was speaking at a Conservative Progress Conference in central London this morning, ahead of the hustings in Birmingham.

He said there has been a lot of debate over 'how' to Brexit, but not enough discussion over 'who' should be leading the Brexit negotiations.

'If we send the wrong person out as our PM there will be no trust, no negotiation, no deal – and if Parliament forces a general election no Brexit,' he said.

'Send the right person and it can be totally different because what [good] negotiators do is they take a set of bad choices and turn them into good choices.' 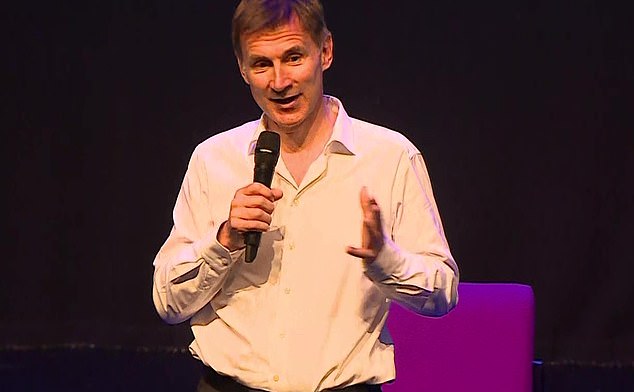 Speaking at a Conservative Progress Conference this morning, Jeremy Hunt said there had been a lot of debate over 'how' to Brexit, but not enough discussion over 'who' 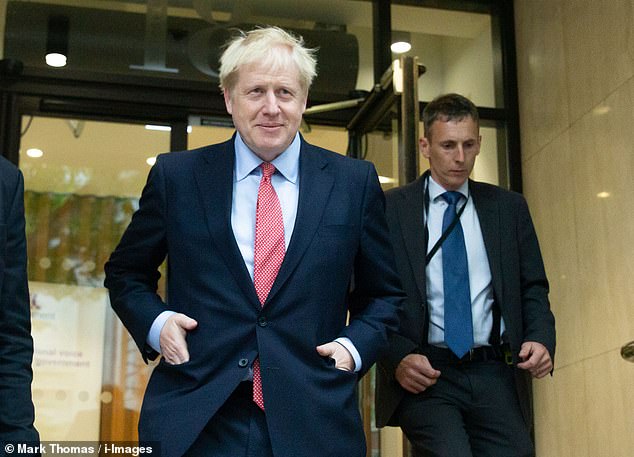 Mr Hunt and Mr Johnson (pictured yesterday), 55, are due to be grilled at the first of 16 national hustings this afternoon where both will face questions from broadcaster Iain Dale

Mr Hunt and Mr Johnson, 55, are due to be grilled at the first of 16 national hustings this afternoon where both will face questions from broadcaster Iain Dale.

Both will each make a short pitch to the audience, followed by questions from Dale and the Tory members at the event.

It comes as it was revealed police were called to the home Mr Johnson shares with Carrie Symonds, 31, early on Friday morning following reports of a 'plate-smashing, screaming row'.

Also today, Mr Hunt released a open letter to Mr Johnson urging him to get involved in more public debates ahead of ballot papers being sent out on July 5.

He slammed Mr Johnson for only having committed to a television debate on July 9, after many Tory members were like to have cast their vote.

He said: 'I'm concerned that you have only so far committed to one TV debate - the ITV debate on July 9, which is after members will have started to return their postal ballots.

'So my challenge to you is this: let's have live televised debates right at the start of this contest, and specifically at least two in the next two weeks before members receive their ballot papers.' 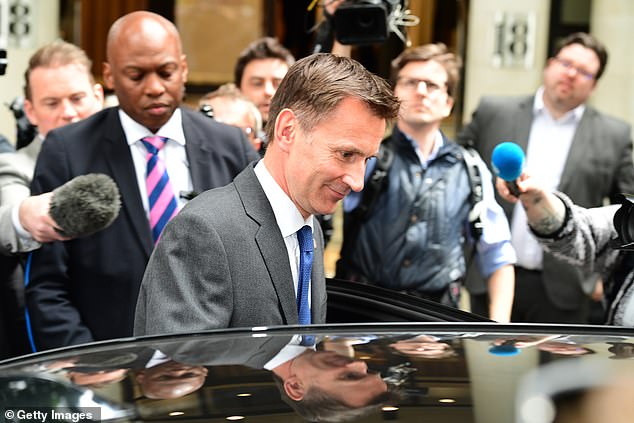 Mr Hunt (pictured yesterday) has slammed Mr Johnson for only having committed to a television debate on July 9, after many Tory members were like to have cast their vote 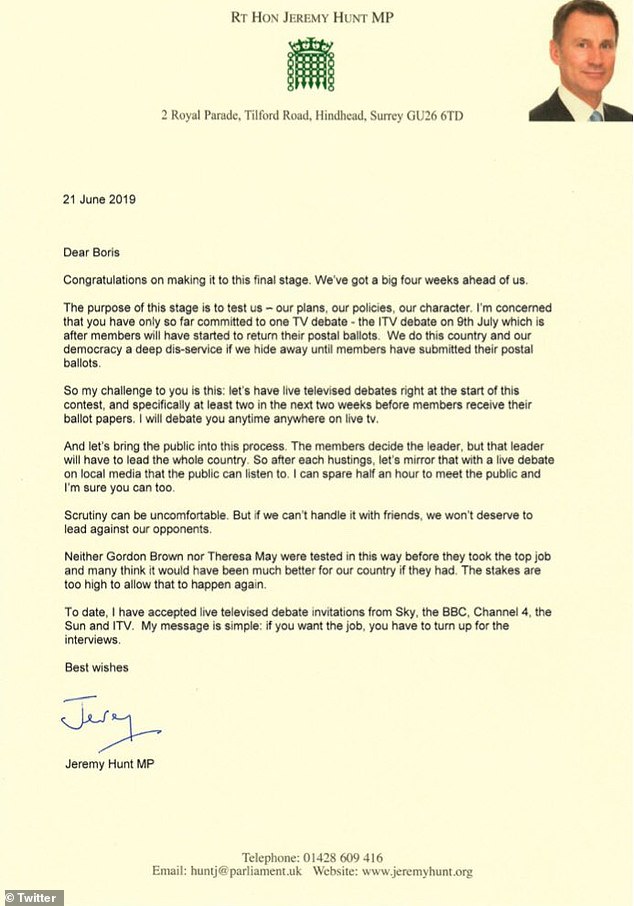 Also today, Mr Hunt released a open letter (pictured) to Mr Johnson urging him to get involved in more public debates ahead of ballot papers being sent out on July 5

He added: 'To date, I have accepted live televised debate invitations from Sky, the BBC, Channel 4, the Sun and ITV. My message is simple: if you want the job, you have to turn up for the interviews.'

There were gasps as the fifth ballot was announced on Thursday evening in committee room 14 in Parliament, leaving Mr Johnson and Mr Hunt as final two.

Mr Hunt has been keen to engage in more public debates with Mr Johnson following the reveal. And speaking to the Daily Telegraph he slammed his predecessor for 'hiding away' and said he was being a 'bottler'.

'And you can’t have that debate if one of the candidates is bottling all opportunities to have a public head-to-head debate before ballot papers are sent out.' 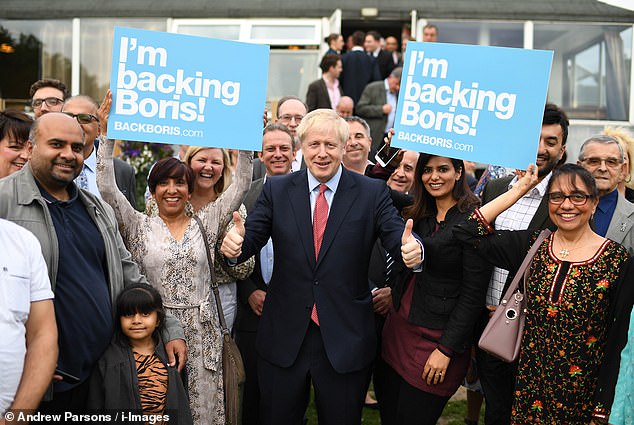 Mr Johnson attended the the Uxbridge & South Ruislip Conservative Association summer drinks this evening, an hour after reports of a row with Miss Symonds emerged 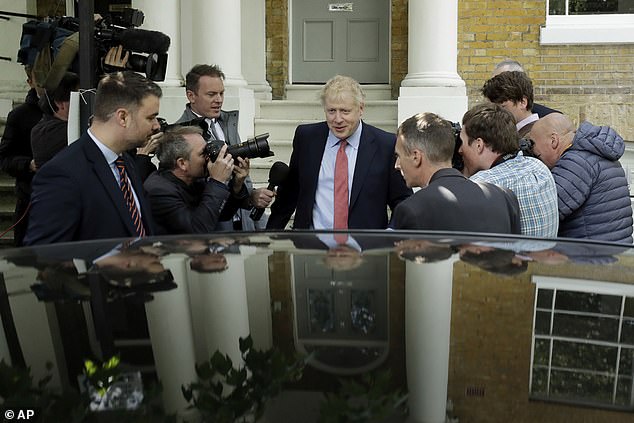 Boris Johnson leaving his house this morning. Police were called to Mr Johnson's house in the early hours after neighbours heard screaming, shouting and banging

In his interview with the newspaper, he again slammed Mr Johnson's decision not to take part in a live televised debate ahead of ballot papers being sent out.

He continued: 'The first thing Boris did after the result was announced was challenge me to a debate on ITV. I thought "fantastic, we’re going to have a really good debate".

'Then I looked at the dates. And that ITV debate is not until after a lot of people have actually sent their votes back.'

Both Mr Hunt and Mr Johnson are now looking to the next phase of the contest, with ITV announcing the first head-to-head televised debate on July 9.

It is understood the BBC want to continue their coverage with a special Question Time, and Sky also want a head-to-head hosted by Kay Burley.

Solar powered electric forecourt set to be built in Essex

Swansea Half Marathon runner dies before the finish line