JAN MOIR: The cause Meghan Markle is supporting is Me, Myself and I

JAN MOIR: The cause Meghan Markl 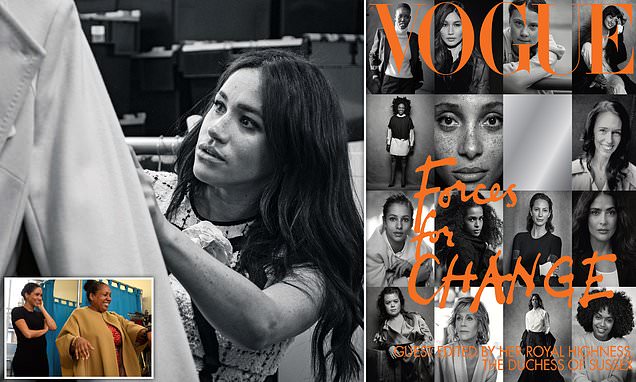 JAN MOIR: The cause Meghan Markle is mostly supporting is the Me, Myself and I Foundation

By Jan Moir for the Daily Mail

Platoon, stand by your pedestals.

Polish up your altruism and prepare to climb aboard and adore thyself afresh.

This time by royal decree – on special orders from the Duchess of Sussex herself.

For our girl is the guest editor of the September issue of Vogue, an honour she thought about carefully in terms of gorgeous, glamorous exposure versus inevitable accusations of hypocrisy – but decided to go right ahead anyway.

Throw a hundred mile cordon around Frogmore Cottage! The duchess is ready for her close-up.

You have to wonder how a woman, whose jarring demands for privacy make the ultra-secretive Bilderberg group look like a desperate boy band, can suddenly disport herself across a magazine and a website that is read and devoured by millions. 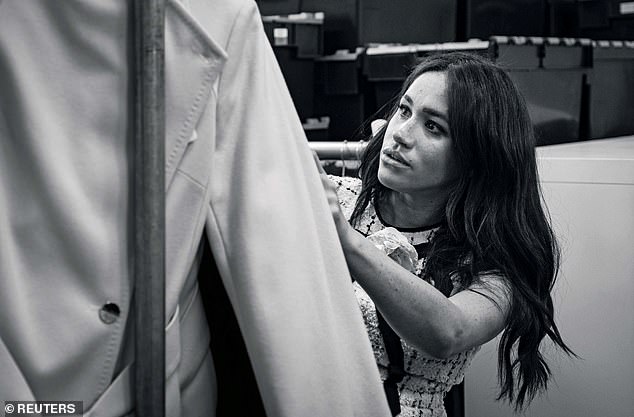 Platoon, stand by your pedestals. Polish up your altruism and prepare to climb aboard and adore thyself afresh. Pictured is Meghan Markle at fashion charity Smart Works - that helps clothe disadvantaged women for job interviews

For a start, the first thing Meghan did was to eschew putting herself on the cover of Vogue – a bit of strategic duchessy gamesmanship one has to admire if one were prone to a touch of bitchiness.

‘She felt that it would be in some ways a “boastful” thing to do,’ explained the magazine’s editor Edward Enninful, who masterminded the royal liaison.

Boastful? If this was a catty custard pie lobbed at the Duchess of Cambridge – who did appear on the cover of Vogue for its centenary issue in June 2016 – well it landed slap bang on tiara target.

Instead of her modest self, Meghan’s Vogue cover features 15 so-called game-changers – women she finds inspirational and wants to bring to public attention. 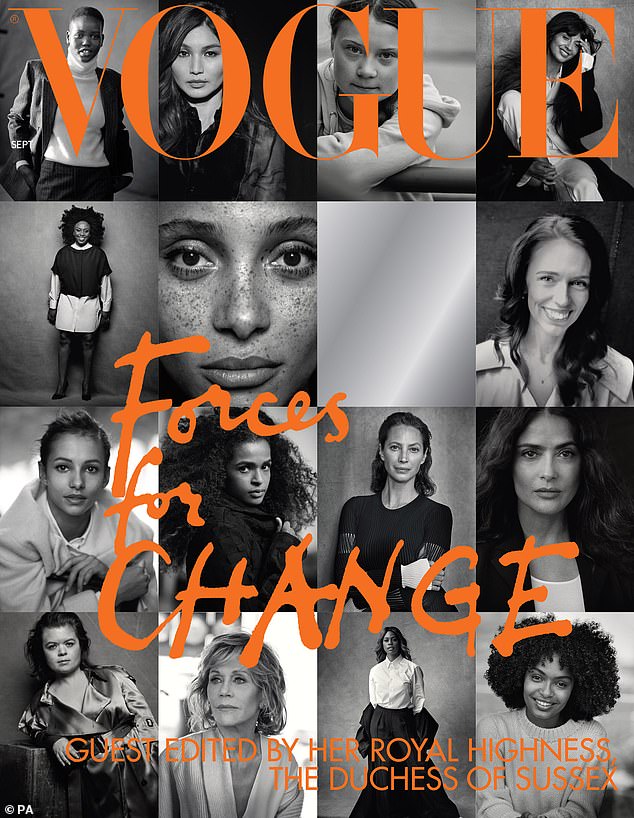 You have to wonder how a woman, whose jarring demands for privacy make the ultra-secretive Bilderberg group look like a desperate boy band, can suddenly disport herself across a magazine and a website that is read and devoured by millions. Pictured is Meghan's Vogue cover

They range from a little-known campaigner called Jane Fonda to assorted international models, multi-millionaires and high-profile BAME (Black, Asian and Minority Ethinic) women; nearly all of them beautiful, well-connected and absolutely fabulous in that glossy magazine way.

The duchess insisted that the 16th space on the cover contains a mirror, because she wants you YES, YOU – to look into it and be ‘inspired by yourself’.

Isn’t that darling? Let’s give it a go. Meghan Mirror on the wall, who is the unfairest one of all?

Could it be me? I certainly find myself super-inspired by the Duchess of Sussex’s latest wacko public venture, perhaps just not in the way she might have hoped. She and Vogue have grouped the women together as representatives of something they call ‘Forces for Change,’ claiming that these individuals impact and reshape society in radical and positive ways. 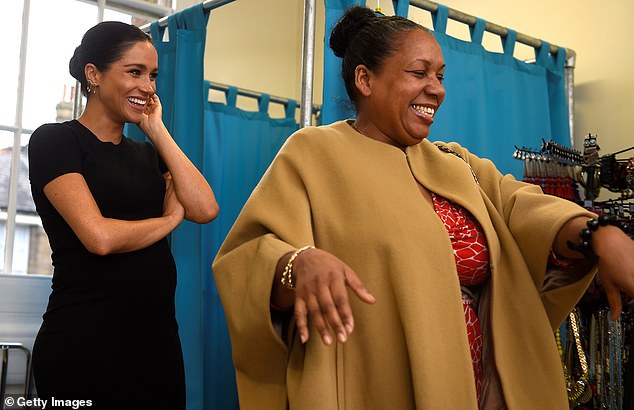 For a start, the first thing Meghan did was to eschew putting herself on the cover of Vogue – a bit of strategic duchessy gamesmanship one has to admire if one were prone to a touch of bitchiness. Pictured is Meghan at Smart Works

Their number include ‘activists to artists, poets to provocateurs’. Like who?

There is Adwoa Aboah, a top model who once had addiction problem but now runs a website to help young women with issues. Then there is Salma Hayek Pinault, whom Vogue grandly describes as a ‘women’s rights advocate, actor and producer’ without mentioning that she is married to billionaire businessman François-Henri Pinault, whose collection of luxury goods companies are one of Vogue’s chief advertisers.

Ramla Ali? A beautiful boxer who used her social media accounts to list all the free labels she wore to a corporate hospitality even at Wimbledon this year, including Victoria Beckham and Jimmy Choo, thank you.

Meanwhile, Adut Akech is another ravishing model and former refugee. Her recent Instagram accounts reveal a single Pray For Sudan posting amid a blizzard of puffs for her new perfume campaign and several selfies in a neon bikini, so she’s in.

Her chosen 15 range from a little-known campaigner called Jane Fonda to Chimamanda Ngozi Adichie, 31 (right). Nigerian novelist whose 2012 TEDx talk 'We should all be feminists' has been viewed more than five million times

It is hard to see how the young climate change campaigner Greta Thunberg can possibly approve of all these gas-guzzling supermodels flying across the globe to pose in a pair of pants, but she’s in there too.

All of these women are indeed inspiring in their way but they are not exactly running refugee camps or doing shifts in their local hospice at the weekend like millions of less glamorous but unsung heroines quietly toiling away in communities up and down the land.

Jane Fonda doesn’t need the Duchess of Sussex to ‘shine a light’ on her good works while surely eyebrows are being raised over the inclusion of New Zealand Prime Minister Jacinda Ardern in the list.

Her claim to game-change fame is that she wore a hijab to meet members of the Muslim community after 50 people were killed in the Christchurch mosque shootings last year.

It was the kind of inclusive gesture that went down well in ‘woke circles’ although some critics pointed out that women in conservative Muslim countries are forced to cover up for the sake of modesty, and that there is nothing liberal or wonderful about it

My chief beef is that most of these ‘game-changing women’ have been chosen because of what they are rather than what they do. Vogue and Meghan might be desperately sincere about promoting them and ushering in this brave new world but it is still hard to escape the overspill of glutinous self-regard that marinates the entire project.

Nor the persistent feeling that the cause the duchess is mostly supporting is the Me, Myself & I Foundation.

Perhaps that is not entirely her fault for the Sussexes are such a hot ticket at the moment they must be inundated with similar offers from those desperate to bask or benefit from their prestige.

Indeed Mr Enninful can barely hide his glee at bringing Meghan on board. The thrilled editor even describes her as ‘the country’s most influential beacon of change’.

Baby, she is a firework! There certainly seems to be no end to Meghan’s philanthropy nor her desire to improve the world, raise awareness and brighten the experiences of those less fortunate.

Just so long as it does not impinge on her velvety royal life or involve a revolting member of the public talking to her, taking her picture, asking after baby Archie or patting her dog.

And in the end, even her royalty is not enough. Vogue insists that she is some sort of visionary as well with her finger on the pulse of modern life. ‘She is willing to wade into more complex and nuanced areas,’ said the magazine in a press release announcing the coup, ‘whether they concern female empowerment, mental health, race or privilege.’

Excuse me? Name me a more privileged woman than the one who ordered people not to photograph her at Wimbledon. Despite her wish to do good and, more importantly, to be seen to do good in the most glamarama way possibly, the duchess is in danger of becoming just another celebrity who wants to be a private individual in public but who cannot resist the temptation of a platform upon which to hold forth.

UK is STILL not ready for Brexit with just four weeks until... 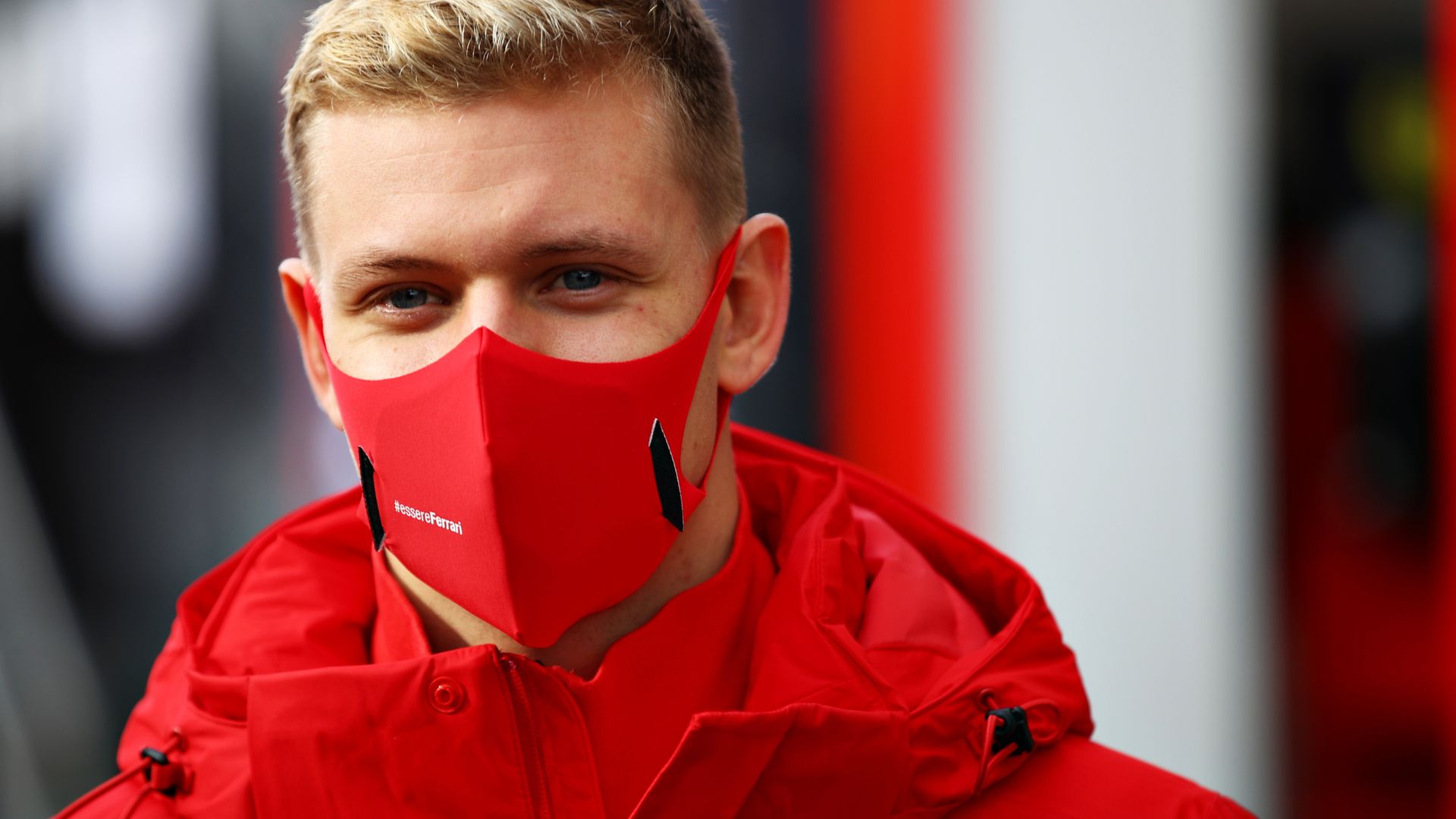