The heroes who braved the Luftwa

The heroes who braved the Luftwaffe to save the free world: Incredible colourised footage shows fearless US Air Force crews carrying out bombing raids across Germany during WWII

Never-before-seen colourised footage has brought to life the horrors US pilots faced while carrying out bombing raids across Germany during the Second World War.

The film was shot in 1943 by director William Wyler, who went on to win Academy Awards, while he was flying on dangerous bombing raids.

Wyler flew in B-17 missions and captured footage for his classic war movie, The Memphis Belle: A Story of a Flying Fortress.

Now a new HBO documentary, The Cold Blue, has used restored footage filmed by Wyler and showing the brave airmen of the US Eighth Air Force.

It shows the servicemen relaxing on their base in England at RAF Bassingbourn, preparing for take off and during tense battles with their German enemies as they fought to liberate Europe from Nazi occupation.

The incredible clips reveal in great detail not just how missions were prepared and carried out, but how the missions were recorded and how the airmen dealt with the daily threat of death.

B-17 Flying Fortress bombers gliding over the skies of Europe dropping ordinance, airmen carrying a dead comrade from a craft and others firing machines guns towards enemy fighters were shown in the dramatic clips - all with the agonised expressions etched on the men's faces.

Directed by Erik Nelson, the new film was made from 16mm footage discovered in the vaults of the National Archives then restored and transformed into full colour. 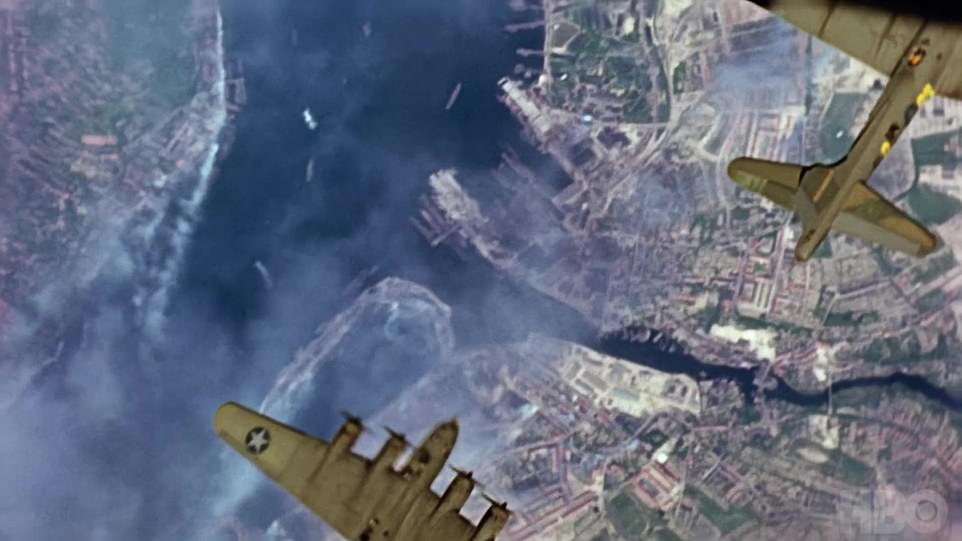 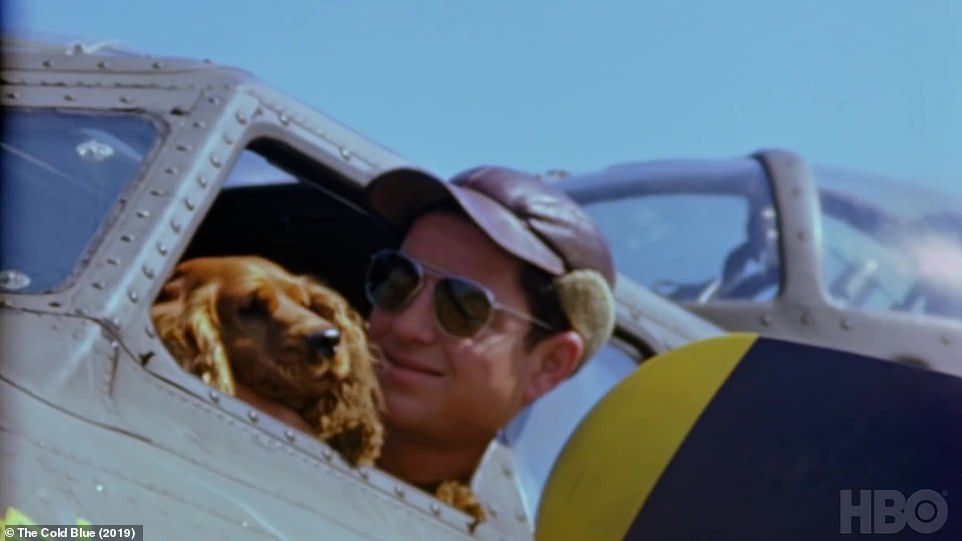 Some scenes in the new previously unseen film show airmen relaxed away from their bombing missions. Here one is seen with a dog sitting in a war machine as they both poke their heads out of the window 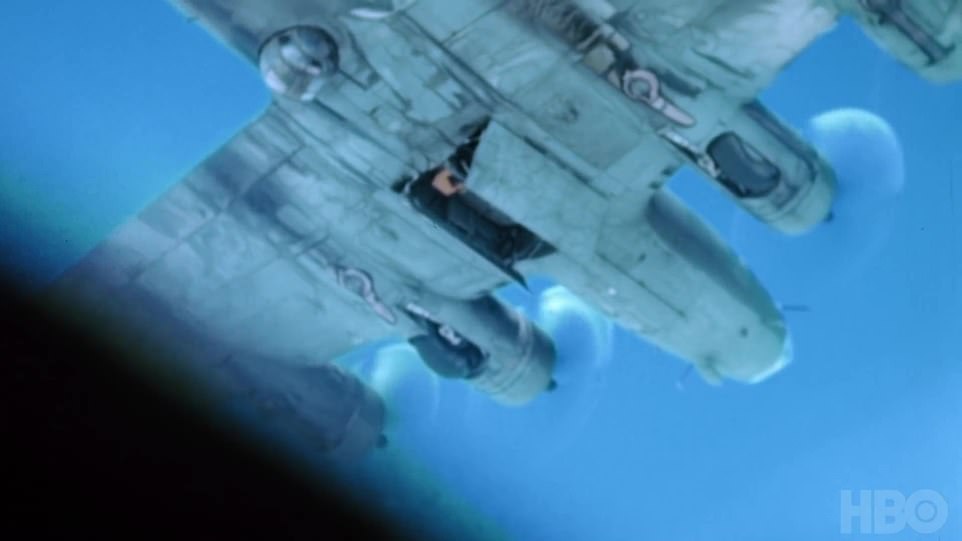 A B-17 Flying Fortress about to drop its payload over Nazi Germany in never-before-seen restored footage.  The B-17 was a four-engined heavy bomber developed in the 1930s for the US United States Army Air Corps used during daylight strategic bombing campaigns of World War II to target German industrial and military targets 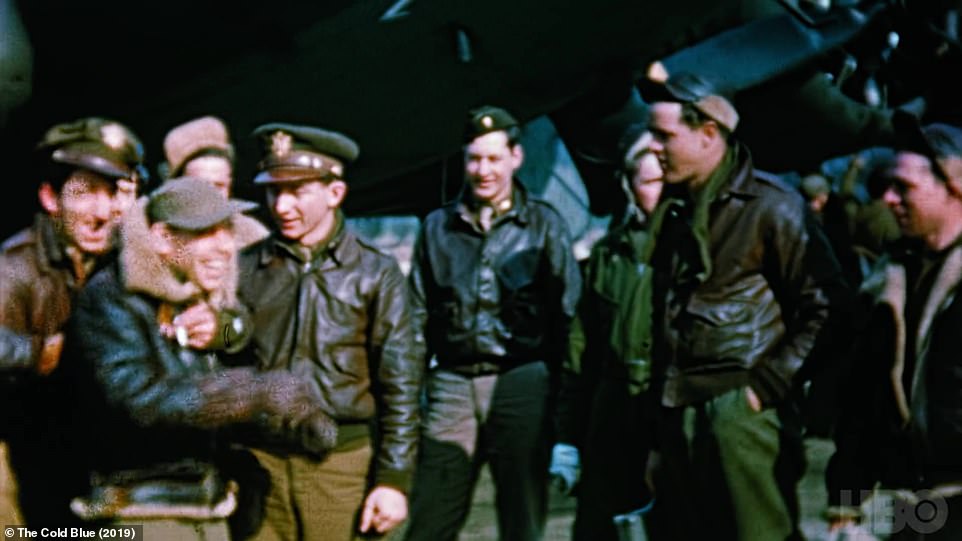 A group of US airmen enjoying a joke at their base in 1943. Director William Wyler flew at great personal risk over enemy territory on actual bombing missions in 1943. During one flight, he lost consciousness from lack of oxygen 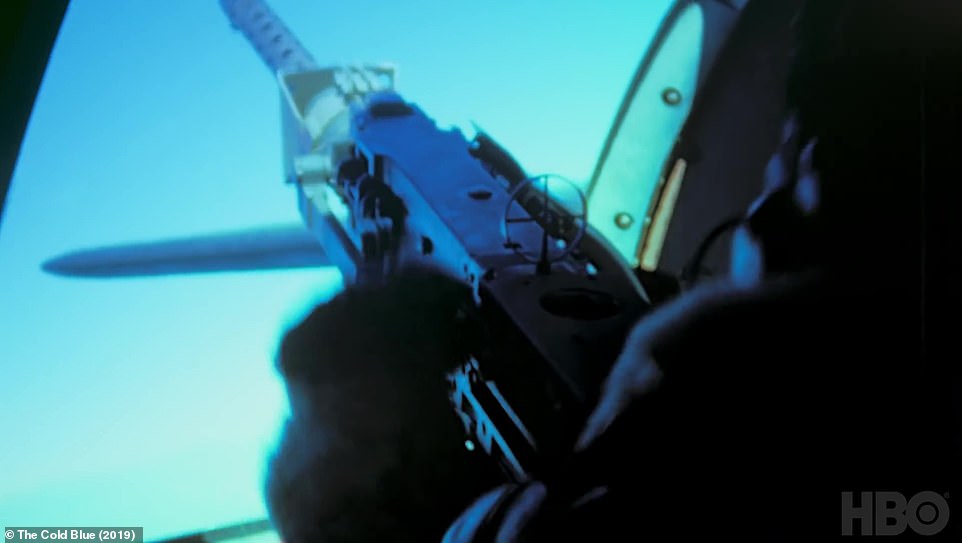 An airmen firing a machine gun at the enemy from a B-17 bomber. As well as restoring colour to the footage, the noise of the aircraft and the weapons being fired were also added, along with the haunting score to show the horrors of war 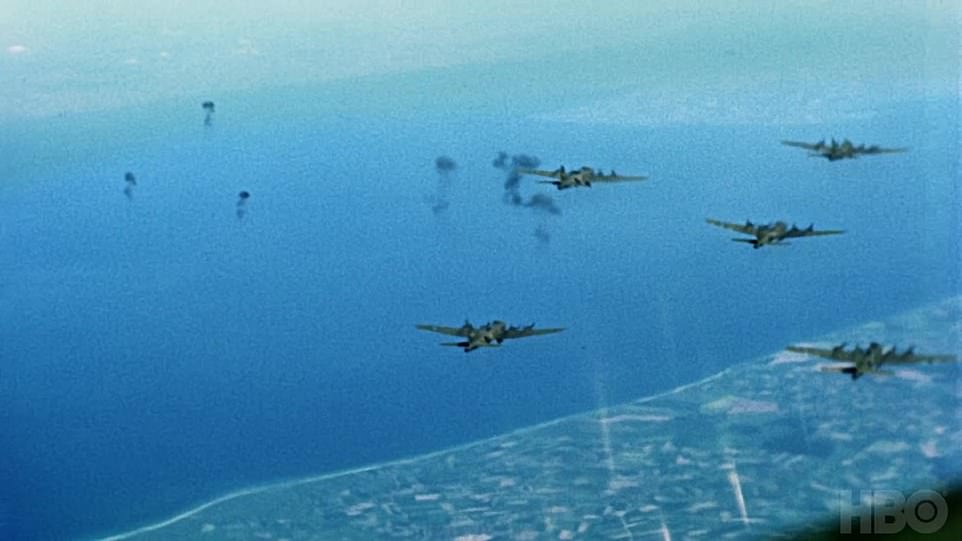 US bombers faced constant danger from Luftwaffe patrols and German anti-aircraft guns while carrying out bombing raids. A veteran from the Eighth Air Force said during the new documentary: 'They said on a clear day the Germans could see us coming 50 miles out' 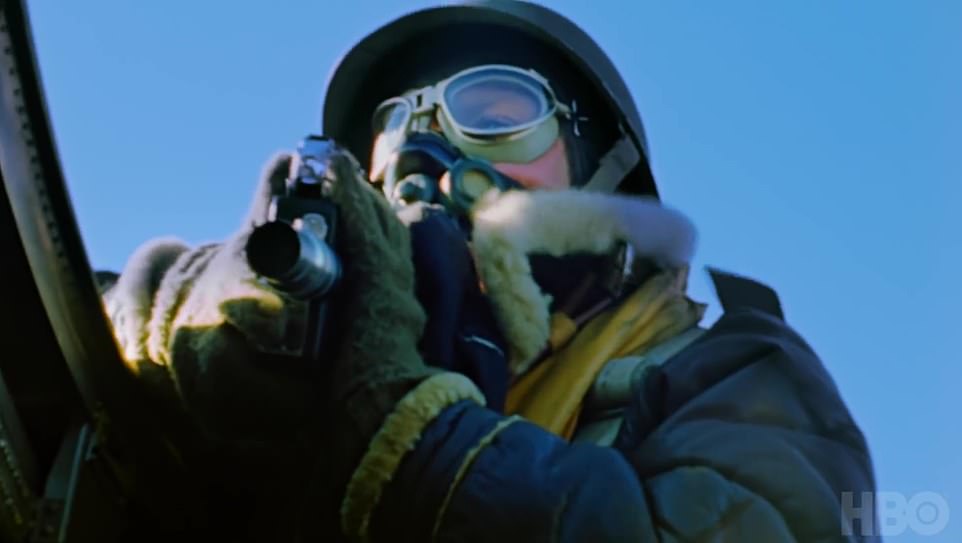 Wyler (pictured with his camera) flew during bombing missions and was injured during one skirmish. In a separate flight his cinematographer First Lieutenant Harold J. Tannenbaum, was shot down and killed while filming 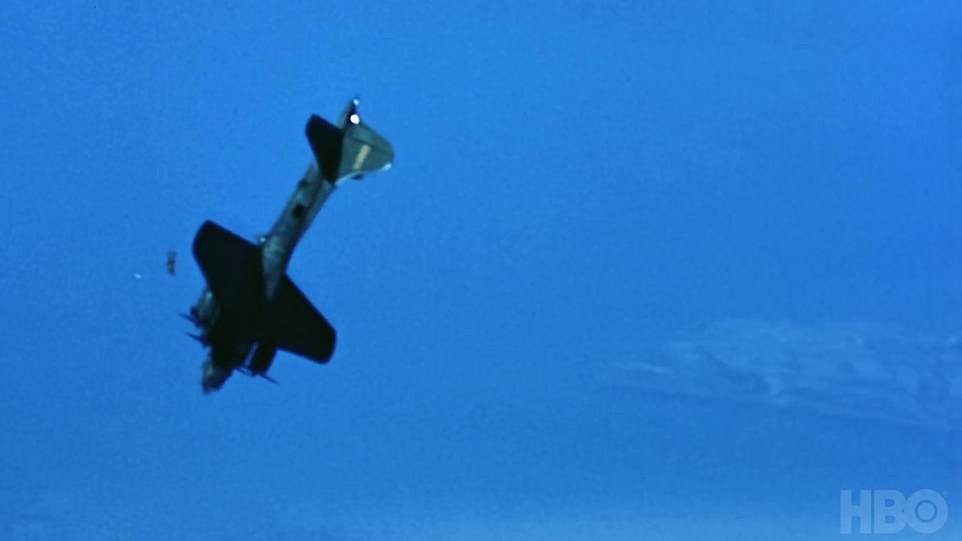 A US Eight Air Force bomber being shot down during a dog fight over occupied Europe. The Eighth suffered devastating casualties in the conflict, with half of the US Air Force's dead in the entire war coming from that one division 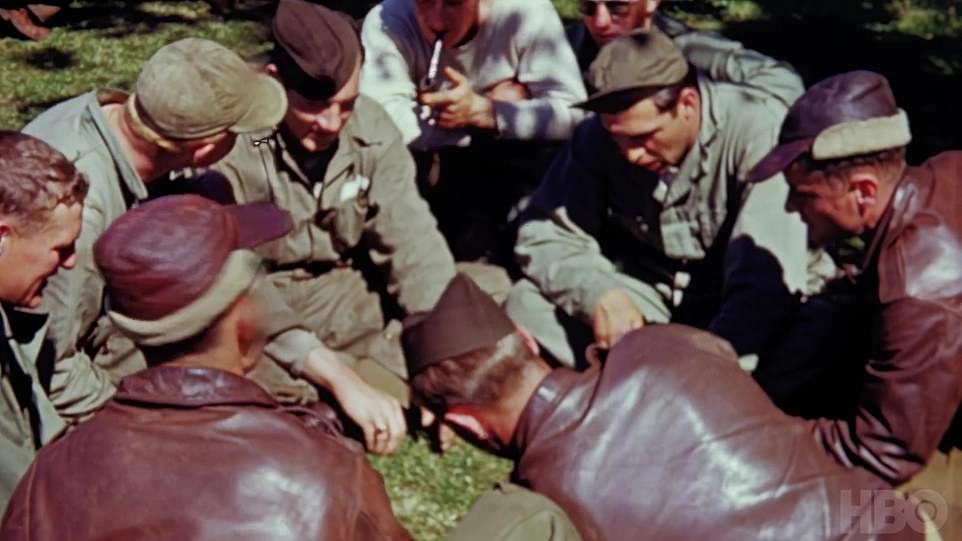 A group of airmen playing a game during some down. One veteran interviewed by filmmakers for the documentary said their daily life saw the threat of death constantly hanging over them. He added: 'It was more or less like being in death row in a penitentiary' 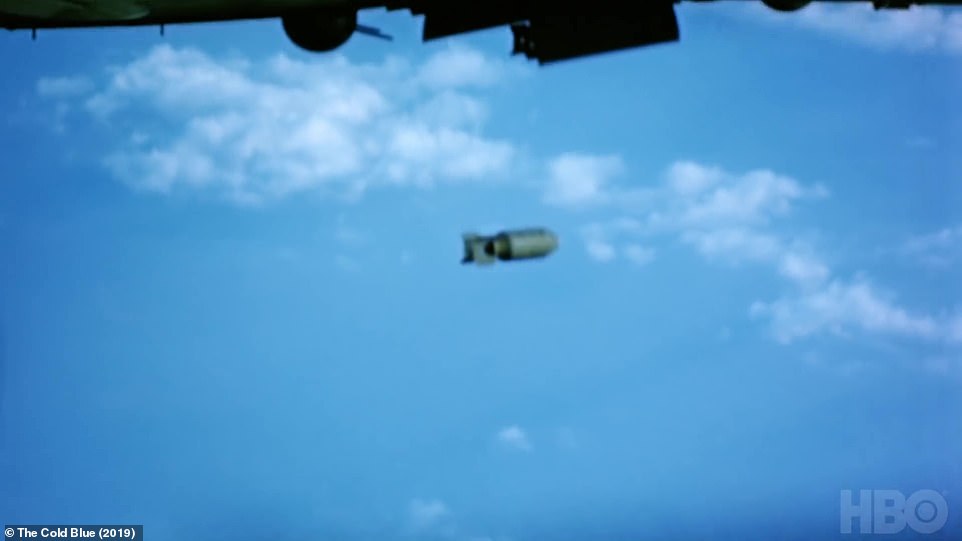 A bomb being dropped by a B-17 Flying Fortress bomber. By 1945 the Eighth Air Force lost more than 26,000 airmen during their overall mission to take control of the skies over Europe to enable the Allied invasion at D-Day 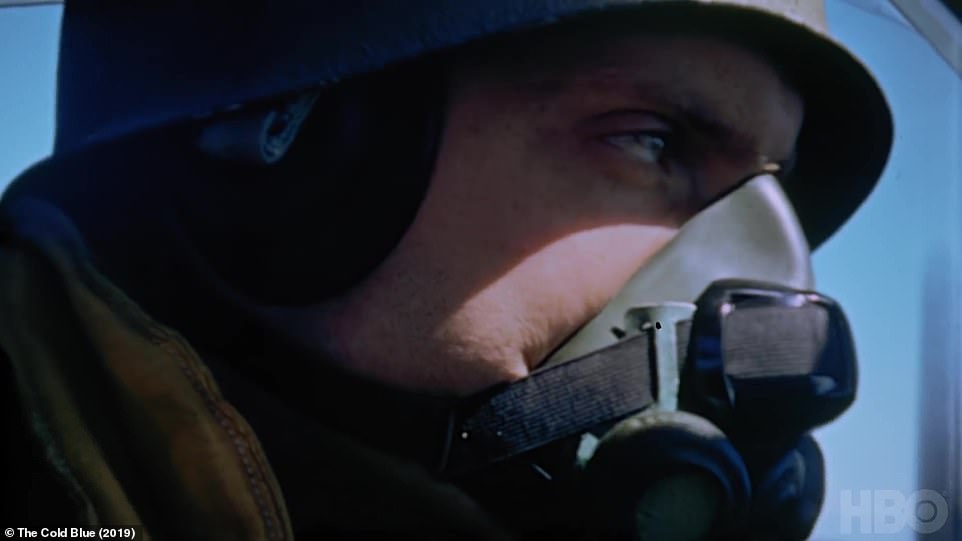 A US close-up of a pilot flying a B-17 bomber taken from the new documentary The Cold Blue. The incredible colourised footage shows the expressions on the faces of airmen of the Eighth Air Force as they fought to liberate Europe from Nazi occupation 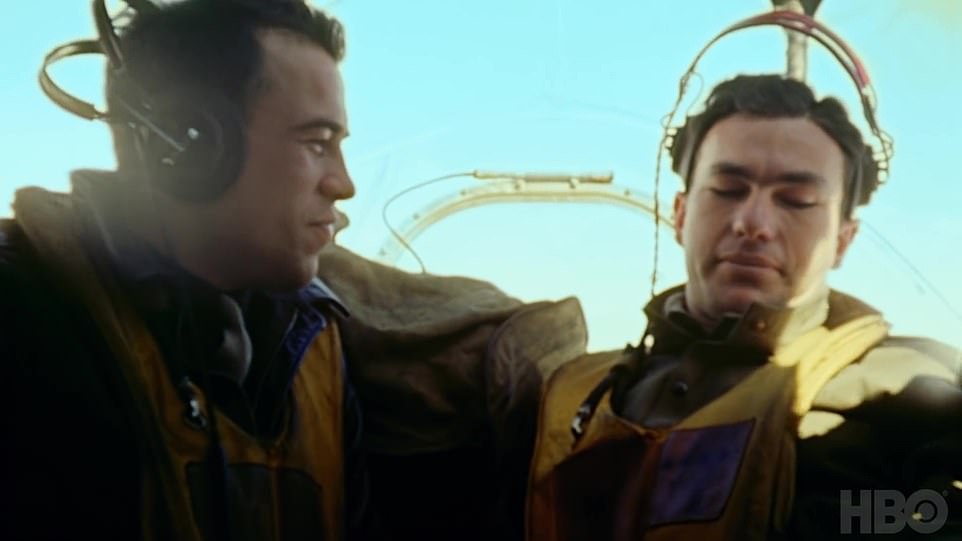 Two airmen filmed by director William Wyler after his footage was unearthed in the National Archives and restored for a new documentary. All of the crew of the B-17 bomber The Memphis Belle have since passed away, so this film was narrated by other WWII veterans of the Eighth Air Force 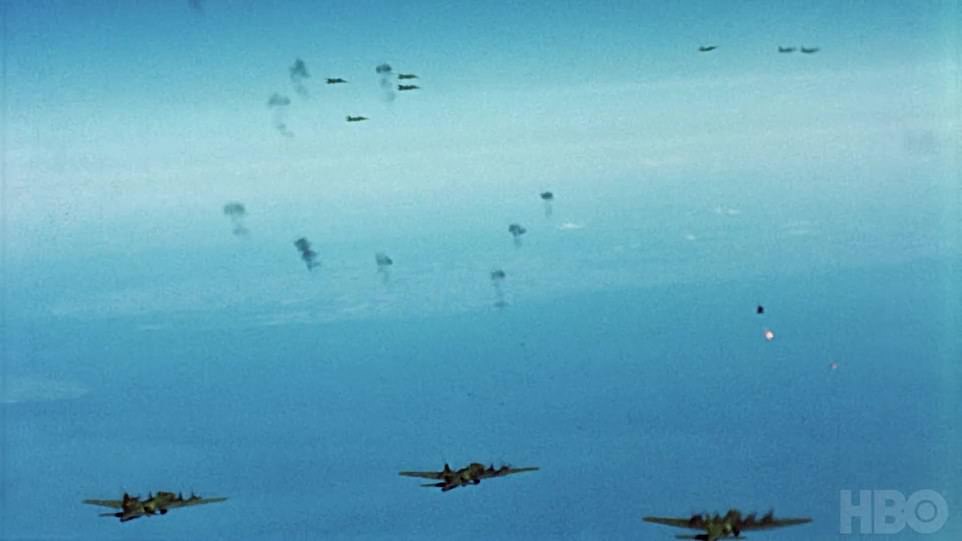 B-17s captured during a dogfight with the Nazi forces in 1943. In July 1942, the first B-17s were sent to England to join the Eighth Air Force. The B-17s were primarily targeted U-boat pens, docks, warehouses, and airfields to industrial targets such as aircraft factories 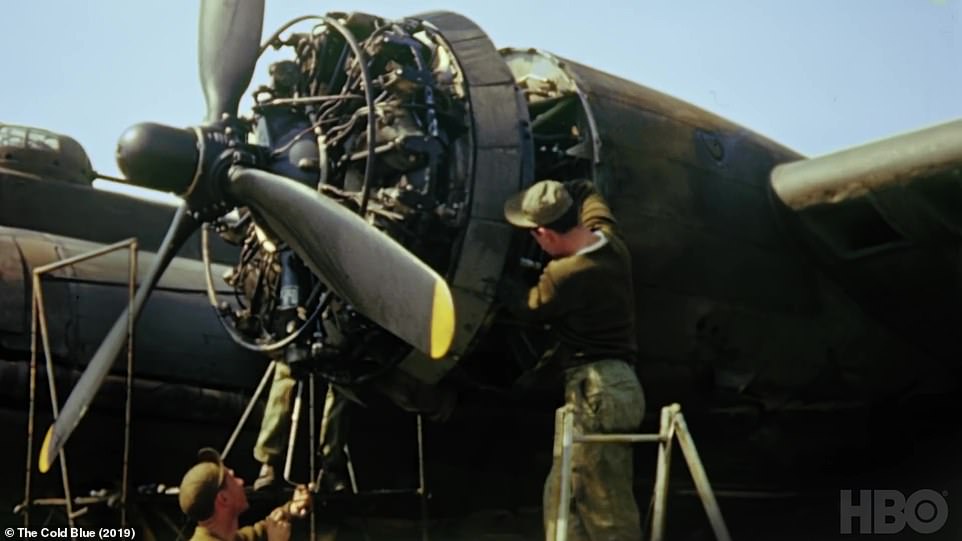 Two airmen repairing a B-17 bomber and preparing it for another mission. Over 11,000 aircraft and 156,000 Allied troops were involved in D-Day - which was commemorated for its 75th anniversary this month. A narrator who lived through the conflict said in the voiceover he was so anxious about the constant threat of death he took up smoking 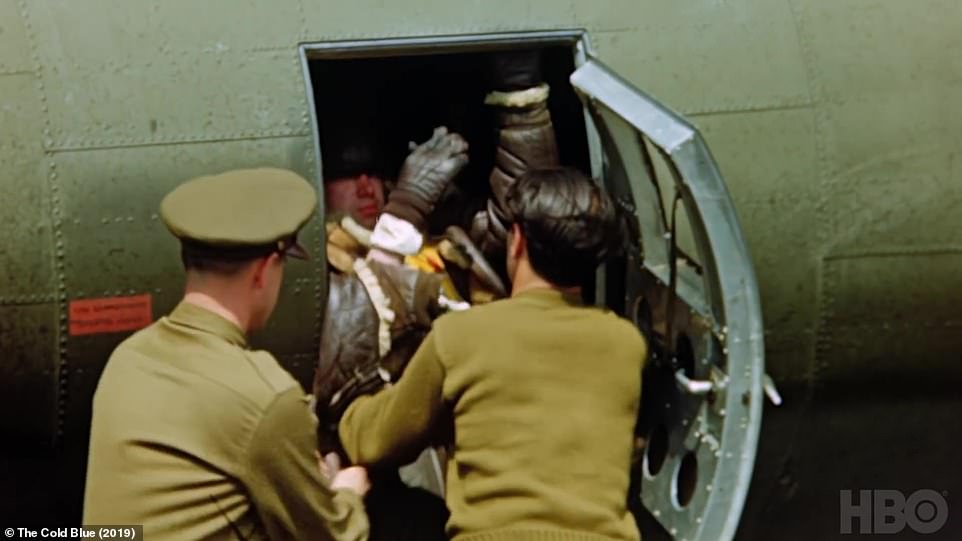 A wounded serviceman being helped from a B-17 bomber when the aircraft returned to base at RAF Bassingbourn in Hertfordshire. Nine surviving veterans of the Eighth Air Force gave their accounts to the filmmakers of the horrors they faced while being in constant danger from Luftwaffe patrols and German anti-aircraft guns 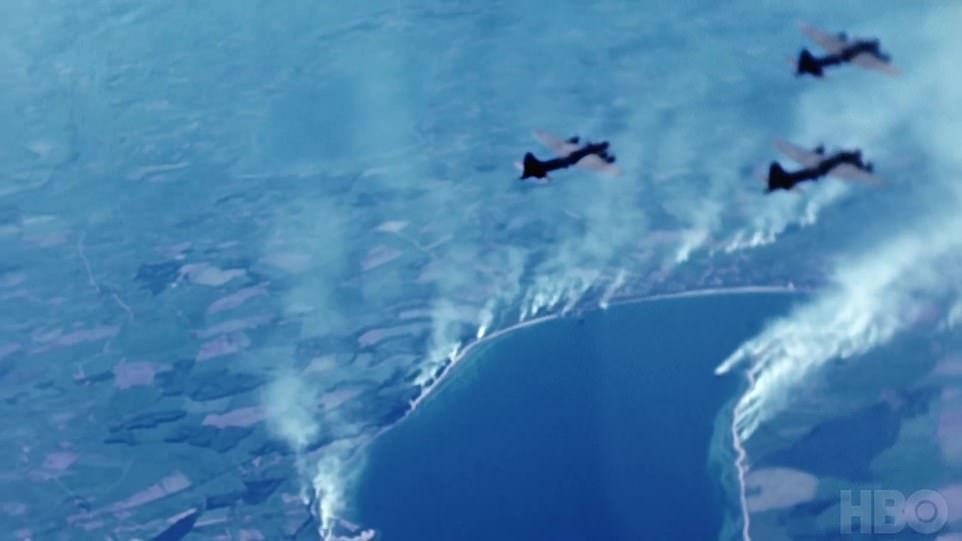 The B-17 (pictured in footage from The Cold Blue) dropped more bombs than any other US aircraft in World War II. Of the 1.5 million tonnes of bombs dropped on Nazi Germany and the occupied territories by US craft, 640,000 tonnes were dropped from B-17s 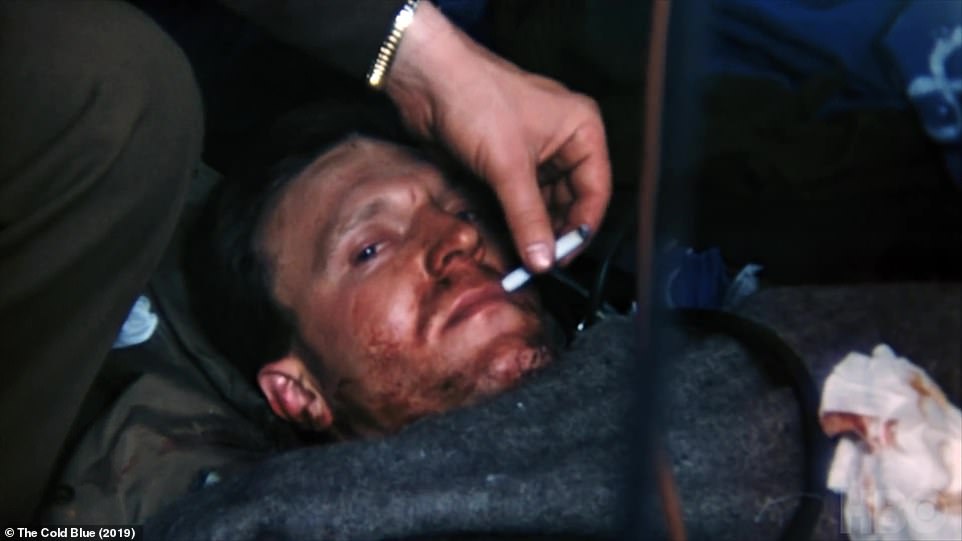 An injured airman being given a cigarette by a comrade. Some of the commentary from the former airmen features the dark humour they used to get through the war, with one recalling how they became concerned if they were served real eggs instead of powered ones as it meant they were about to undertake a dangerous mission 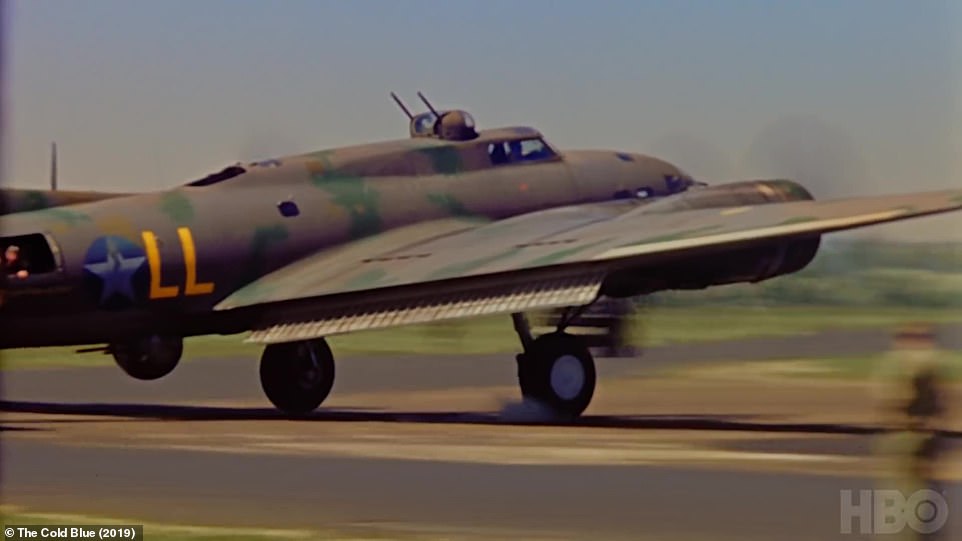 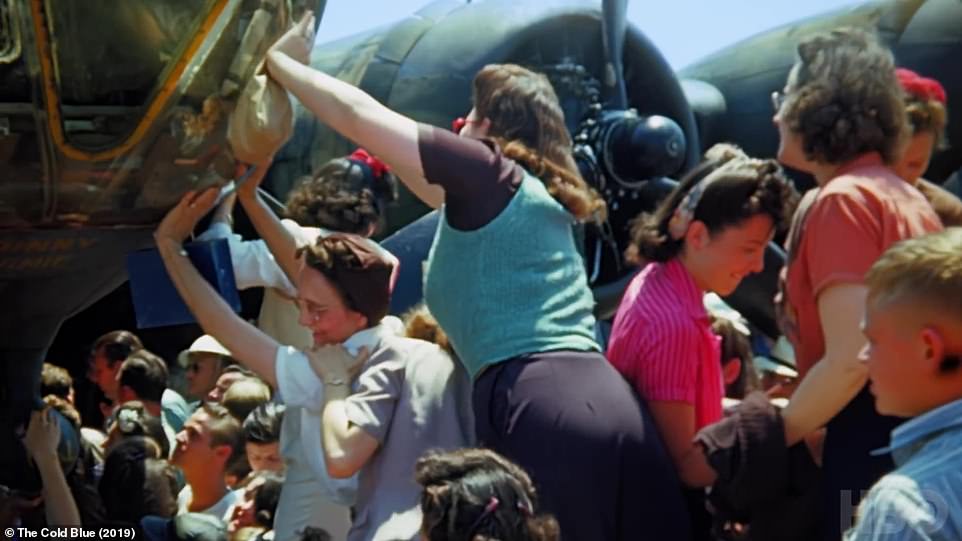 Women and children mob the The Memphis Belle aircraft. The airmen of the Memphis Belle, which launched its raids from their base in Royston, Hertfordshire, managed to survive 25 missions over Europe in 1943 and featured in Wyler's classic war film of the same name 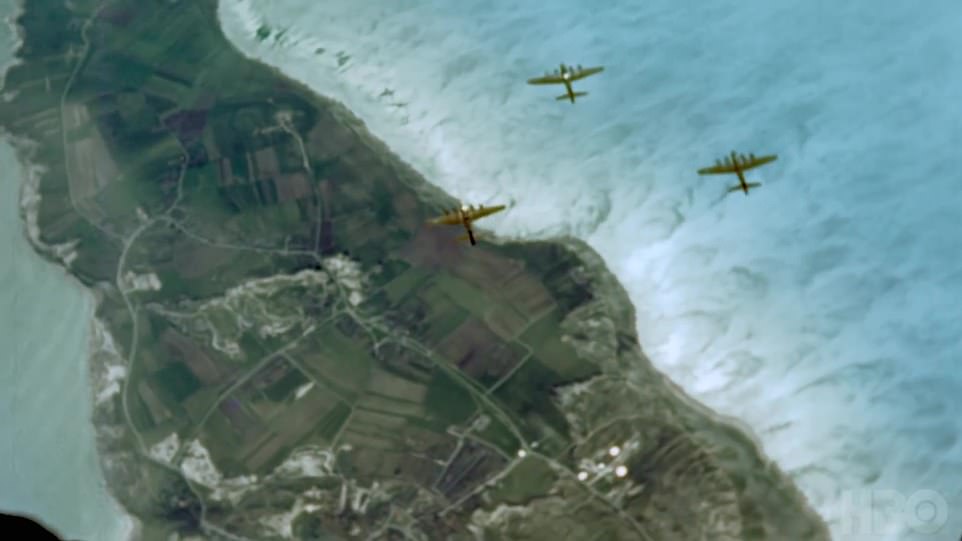 B-17 bombers flying over occupied Europe during a raid captured in The Cold Blue. After examining wrecked B-17s and B-24s, Luftwaffe officers discovered that on average it took about 20 hits with 20 mm shells fired from the rear to bring them down 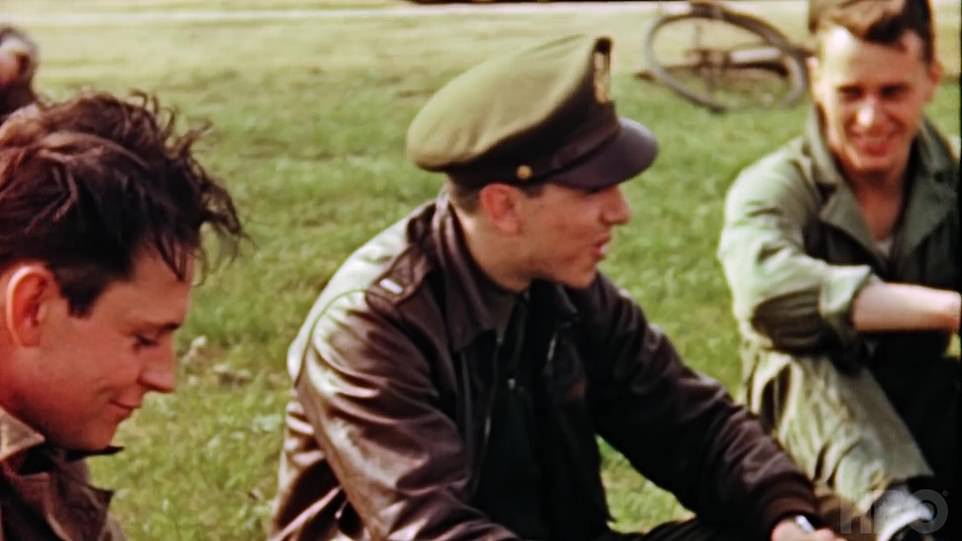 During the haunting scenes captured by Oscar-winning director William Wyler, some airmen are seen in never-before-seen detail. An airman who participated in the film said: 'When you're in a position like that there's no tomorrow' 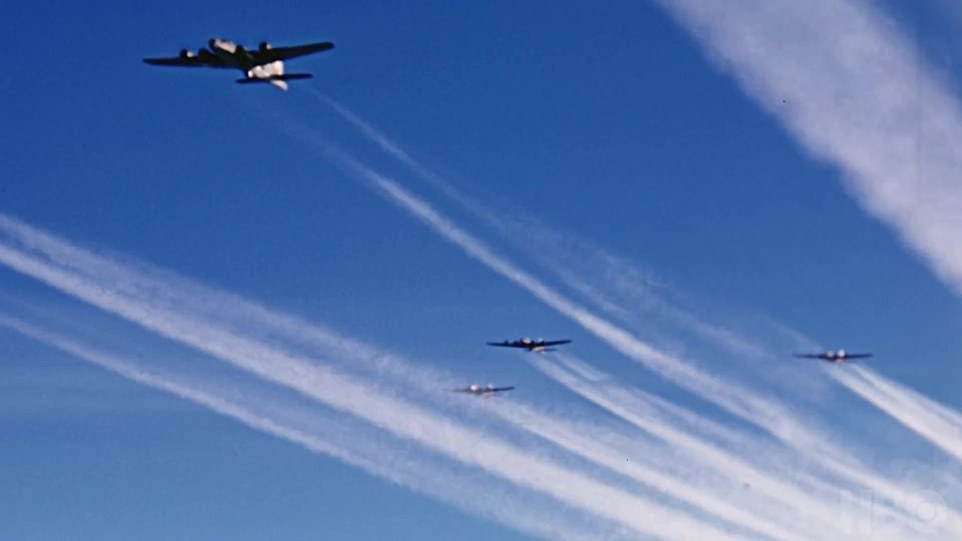 One of the veterans of the conflict who narrated the film described when an engine on his B-17 was hit by the enemy. He recalled: 'He [a colleague] said number four is on fire, get out'. Another crew members added: 'To this day I still see it and when I think of it, I choke up' 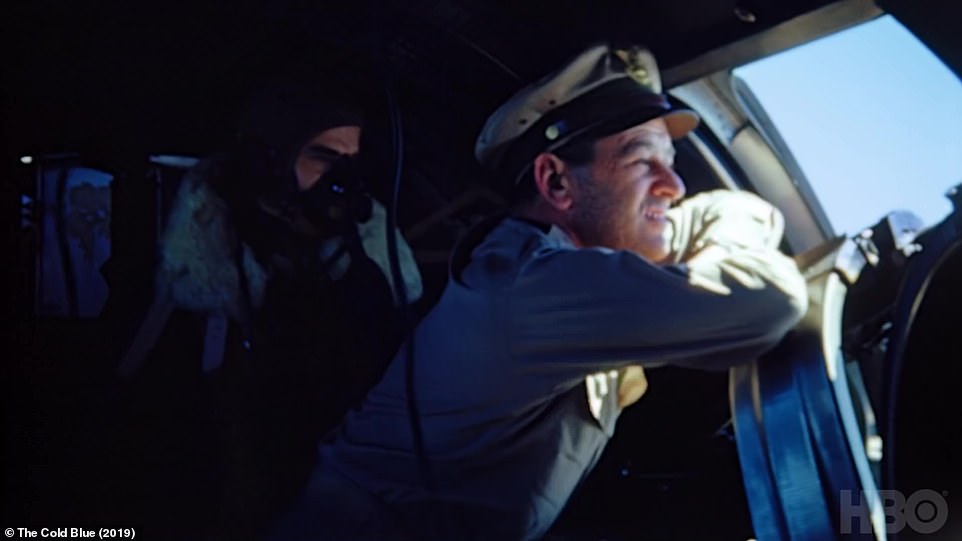 Two crew members on board a B-17 Flying Fortress bomber. One of the narrators told the filmmakers: 'I was 21 years old. We felt like we could live forever.' Another added: 'Anyone who said they weren't afraid was full of crap' 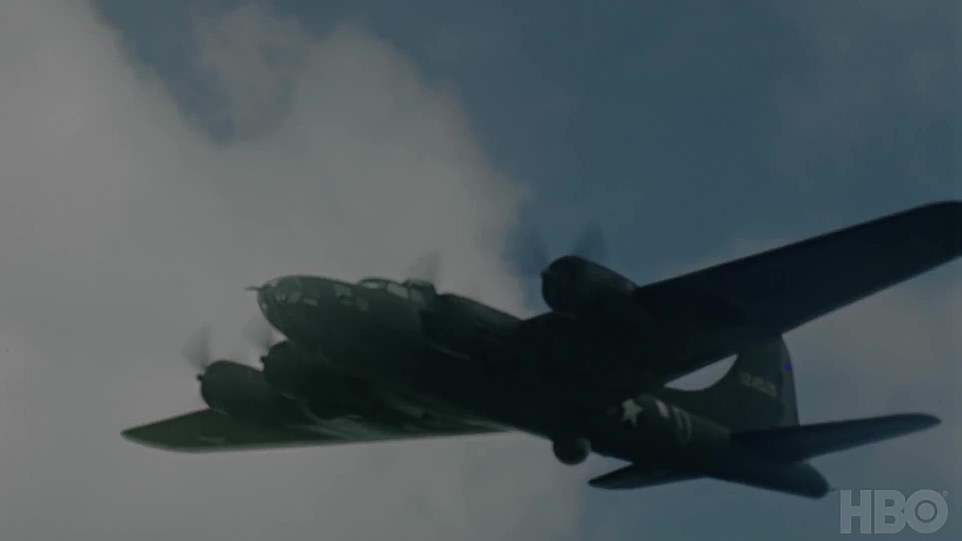 Director of the new documentary, Erik Nelson, said: 'This project was a labour of love that has been three years in the making, from the discovery of William Wyler's original footage to working closely with the National Archives to restore it frame by frame' 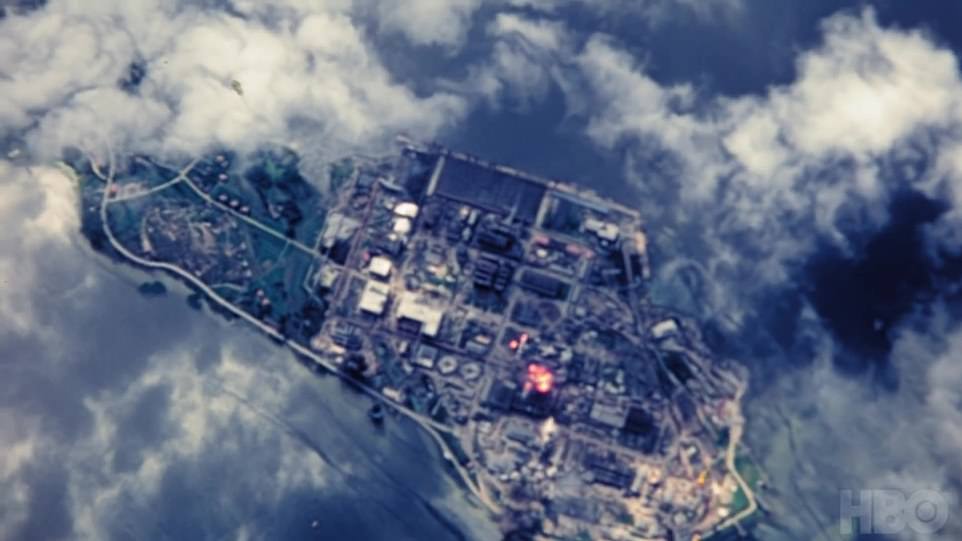 Nelson added: 'We're excited to finally share this special project with audiences and to celebrate the last of the best - the men who risked their lives to save the world 75 years ago' 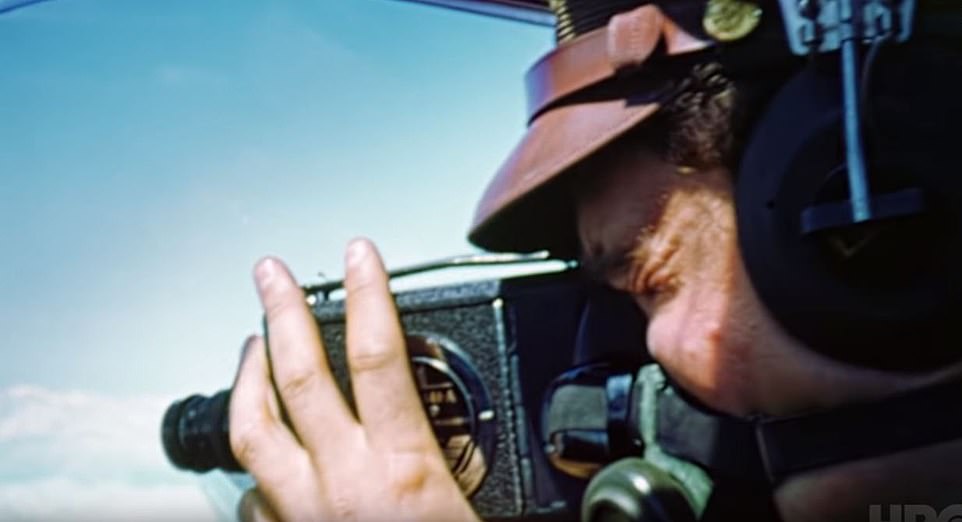 After surviving the war, Wyler went on to make cinematic classic Ben Hur starring Charlton Heston in 1959 and two other movies that all won Academy Awards. The new documentary directed by Erik Nelson will be in UK cinemas from July 4

Pence puts off China speech sequel ahead of Trump-Xi talks

Plane with 62 passengers on board hits a light tower at...

Two of the 29 accused in the case of the fatal Dong Tam land dispute in Vietnam...

The City of London is dying on its feet – so why is its Labour Mayor piling on the...

Boris Johnson's £2.5bn pledge to the jobless: Workers who lose their roles because...

The Savoy viewers insist the documentary is 'NOT a good...

The Savoy viewers claim new documentary is 'not a good PR move' as self-confessed...

'If we need to take action we will not hesitate': Rishi Sunak warns travellers amid...

Where to buy and how to make a mask before they become...

The race for face masks: Where to buy and how to make your own Covid-guard before...