Hunt turns up his trolling of Tory leader rival Johnson

'Boris won't answer your questions so I will #BoJoNoShow': Hunt turns up his trolling of Tory leader rival Johnson by holding one-man Twitter Q&A in place of cancelled Sky News debate

Jeremy Hunt has turned to trolling Boris Johnson online after his Tory leadership rival refused to take part in a televised debate this evening.

Both men had been invited to participate in a debate hosted by Sky News but Mr Johnson has opted to duck the event, leading to it being cancelled.

Mr Hunt has already branded the former foreign secretary a 'coward' for dodging the head-to-head showdown while sources close to him described Mr Johnson as a 'bottler'.

Now Mr Hunt has gone one step further this afternoon by labelling his opponent 'BoJoNoShow'.

However, the Foreign Secretary's attempts to provoke Mr Johnson into committing to greater scrutiny do not appear to be working.

The favourite to succeed Theresa May said this morning that it did not matter what Mr Hunt said, he would not respond. 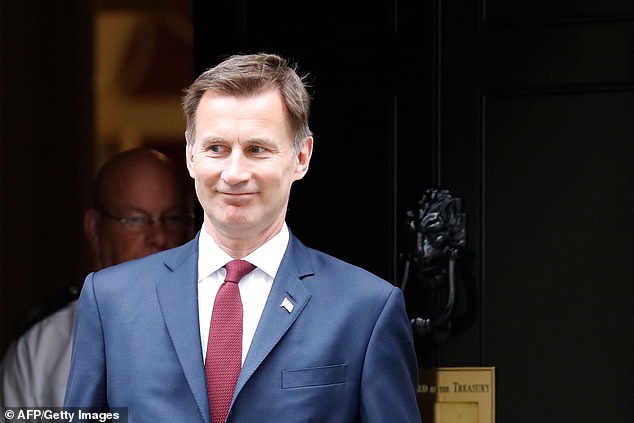 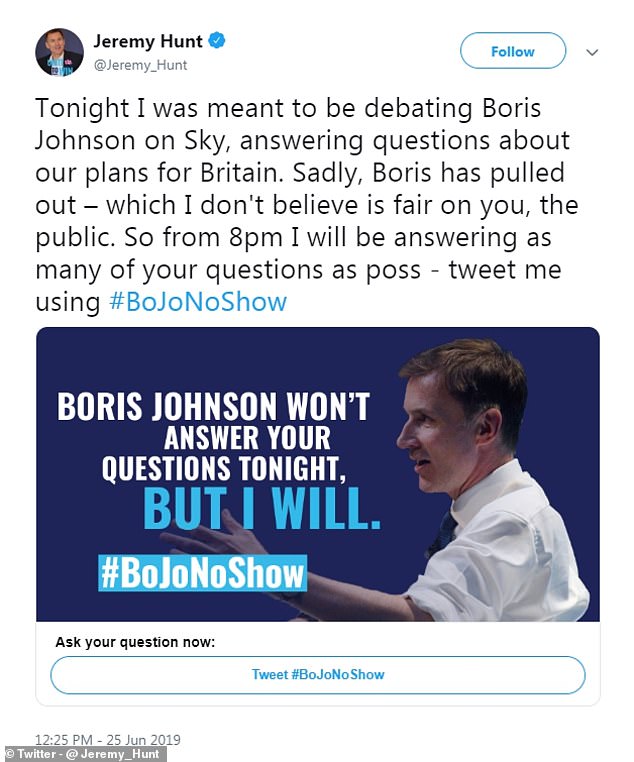 Mr Hunt tweeted this lunchtime: 'Tonight I was meant to be debating Boris Johnson on Sky, answering questions about our plans for Britain.

'Sadly, Boris has pulled out – which I don't believe is fair on you, the public.

'So from 8pm I will be answering as many of your questions as poss - tweet me using #BoJoNoShow.'

Mr Hunt was Team Johnson's preferred opponent in the final two because they believed he would be easier to deal with than Michael Gove, the Environment Secretary, who finished third in the race as he lost out by just two votes.

But Mr Hunt has shown himself since the start of the leadership campaign proper last week to be a game challenger in the battle for the keys to Downing Street.

Mr Johnson said this morning he would not rise to any insults from Mr Hunt or the Foreign Secretary's allies.

He suggested doing so would harm the Conservative Party.

Asked on LBC if he was a 'coward' as Mr Hunt had claimed, Mr Johnson replied: 'I have a maxim in life and in politics which is, I think, nicked from Ronald Reagan, the famous 11th commandment, never speak ill of a fellow Conservative. 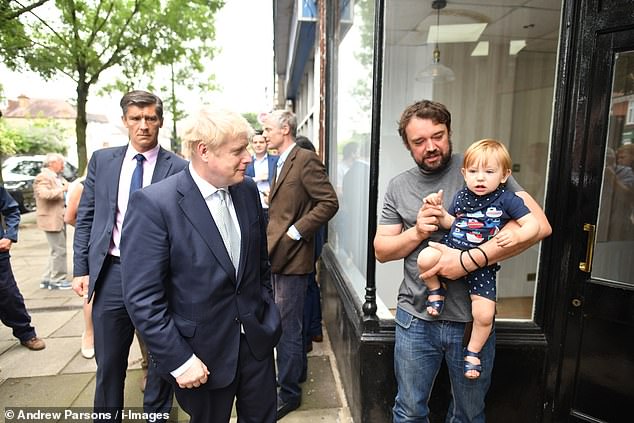 'There is no provocation that any opponent can level at me that will lead me to respond, to dignify that kind of [remark].'

However, Mr Johnson did spell out why he believes he is a superior candidate to Mr Hunt during an interview with TalkRadio.

'I can also formulate a great, one nation, modern conservative agenda and show how it can unite the whole country unlike any other candidate.

'And, and you look at what we did in London and, uh, I believe that I'm the only candidate who can actually, uh, get ready in due course to defeat. Jeremy Corbyn.'

Huge mammoth tooth found next to a broken flowerpot in Devon

Sarah Ferguson performs a deep curtsey to the Queen at...