Huge mammoth tooth found next to a broken flowerpot in Devon

Retired couple find one of the '

By Joe Pinkstone For Mailonline

An enormous mammoth tooth has been accidentally discovered next to a broken plant pot in a Devon garden.

The monster molar weighs 12lbs (5.5kg) and measures 15 inches (38cm) long  was found by the new owners of a cottage in the English countryside.

Stephen and Stella Huyshe-Shires found the item last November and were unaware of its true origin.

They only discovered their quirky find was actually a fossilised tooth when they spotted another mammoth relic on display at Sidmouth museum.

Experts say it is much larger than most mammoth teeth and could be one of the biggest ever discovered. 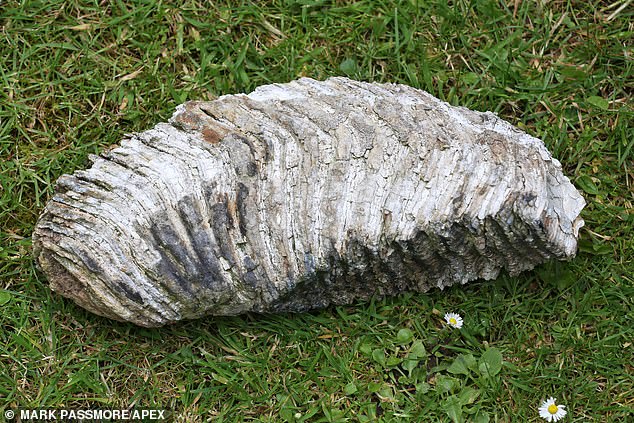 The monster molar weighs 12lbs (5.5kg) and was found by the new owners of a cottage in the English countryside. It is undergoing further tests and believed to be the largest and rearmost tooth of an adult mammoth

Professor Adrian Lister said: 'This is a lower last (back) molar of a woolly mammoth, and the back ones were the biggest.

'However, the molar found in Sidbury had already worn down somewhat through feeding in life, so would likely have weighed more (perhaps up to 7 kg (15.3lbs)) originally.'

Mrs Huyshe-Shires said the tooth looked like a broken ornament on first inspection.

Her husband added: 'One of the slides at the lecture was of a mammoth tooth and we said 'we have one of those'.

'What we didn't have was a sense of scale from that slide we had no idea of how big it was.

'We came down to the museum and said 'we think we have got one' and they showed us some of their collection and we thought 'these are quite small maybe it isn't a mammoth tooth'.

'It's quite unbelievable really. You wait 10,000 years for a mammoth tooth and then two come along together.'

The new discovery weighs more than double the largest teeth in Sidmouth museum's collection, which tip the scales at 5.5lbs (2.5kg).

The origin of how the tooth was discovered before it ended up the the garden remains a mystery and Sidmouth Museum is trying to track down when and where it was found. 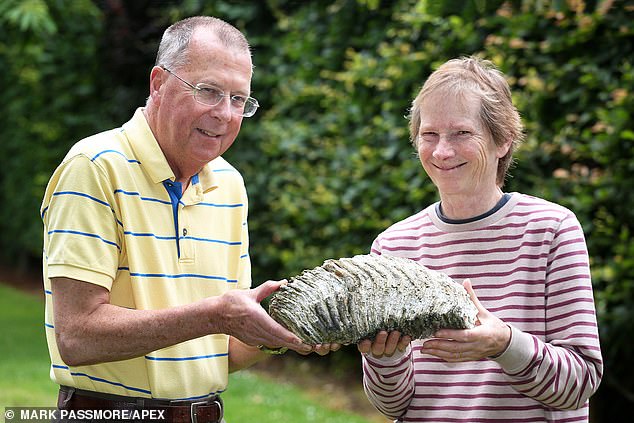 Stephen and Stella Huyshe-Shires (pictured) found the 12lbs (5.5kg) tooth in November and were unaware of its true origin. They only discovered their quirky find was actually a fossilised tooth when they spotted another mammoth tooth on display at Sidmouth museum 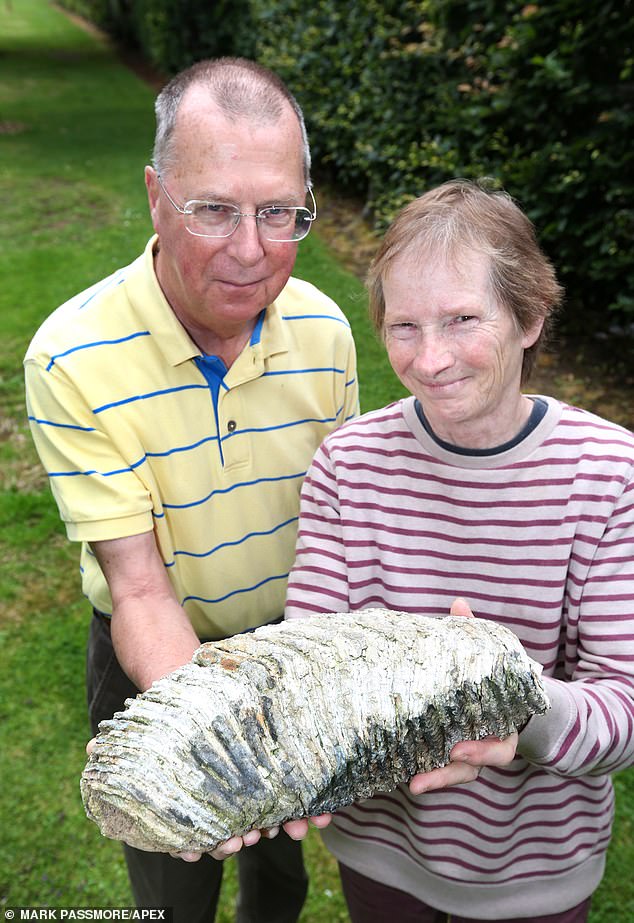 Mrs Huyshe-Shires said the tooth looked like a broken ornament on first inspection. The ormous mammoth tooth has been accidentally discovered next to a broken plant pot in a Devon garden

Colin Boynton, assistant geologist curator from Sidmouth Museum, said another tooth was located in Sidbury during the 1970s but this was the biggest by far in the collection.

He said: 'Three or four teeth have been found near the beaches or trawled up by fishermen.

'Mammoths go through six sets of teeth, so five changes during their lifetime and as they grind down, the new one is growing and pushing the other one out until it drops out.

'Each tooth is larger than the previous one, so this has to be the last one due to the weight.'

Ann Tanner, from the museum, hoped anyone who lived or carried out work at the property could help shed light on when it was discovered to begin to build a picture of mammoths' activities in the Sid Valley.

She added: 'This is so big, the mammoth's head must have been absolutely massive.

'Someone must know something about it.'

Mr Huish-Shires added that one theory was that the tooth had been dug up from the garden when a gas tank had been installed by a previous owner.

He said: 'The tooth had always been in the garden according to the person we bought the house from.

'It's possible it was dug up in the garden and left there. There are examples of local mammoth teeth in the museum so they did live here.

'It's a super find and the most fitting place for it was in the local museum.'

Hunt turns up his trolling of Tory leader rival Johnson

Property expert reveals the home improvements that are...