This is the savage moment two older boys rain down punches and head-kicks on a helpless 12-year-old school pupil.

Adam Bailey from Trent Vale, Staffordshire, was shoved to the ground on Wednesday evening in a brutal attack which left the child with a bloodied nose and neck injuries.

While Adam, a Trentham High School student, writhes on the ground third and desperately tries to shield himself from the blows, a third person stands by and films the assault.

Eric Bailey, 52, was appalled at the assault on his son and hit out at both the attackers - one of Adam apparently claims was carrying a knife - and whoever recorded it. 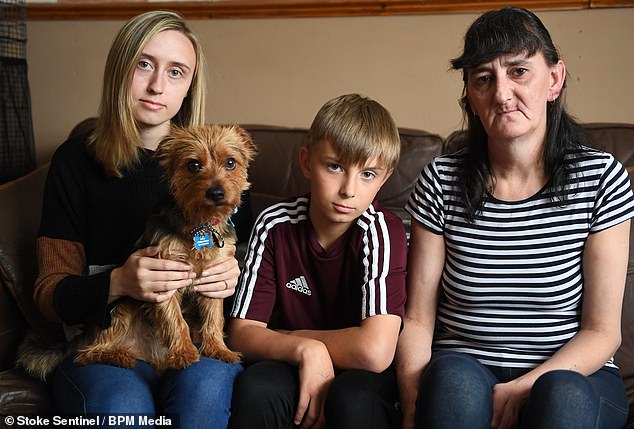 Adam Bailey (middle with sister Katieanne and mother Kay) from Trent Vale, Staffordshire, was shoved to the ground on Wednesday evening in a brutal attack which left the child with a bloodied nose and neck injuries 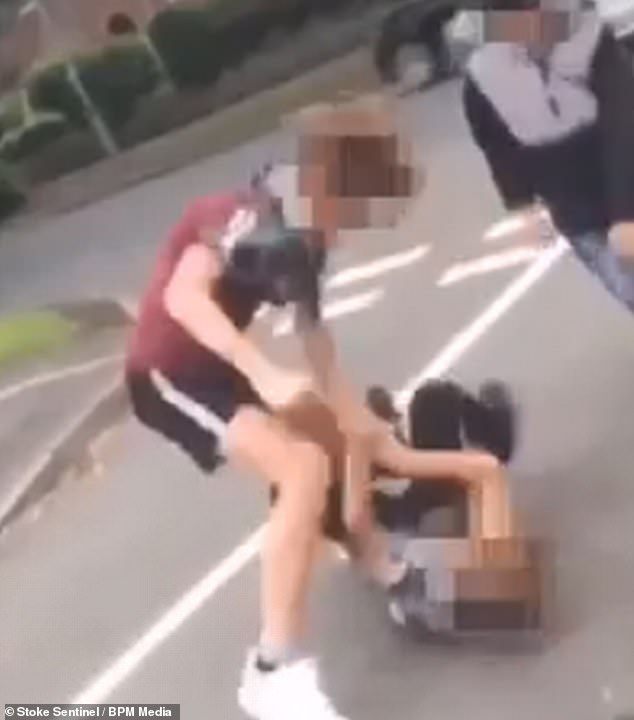 The bakery operative at Premier Foods said: 'I don't know who filmed it, I think it was a young girl, it's on social media now.

'They do this quite a lot, they beat somebody up and then they stick it on Instagram for other people to watch.

'I wasn't very happy when I saw it. I just wish that the person filming it has children when they're older and it happens to them and then they'll know how it feels.

'It's terrible, it's just a disgrace that somebody could just stand there and they're all laughing at him.

'It's disgusting, they all think it's a game and something to laugh about but somebody is going to be seriously hurt and it needs to be stopped.'

The attack was believed to have been provoked by one of Adam's friends who made a comment about one of the assailant's mothers. 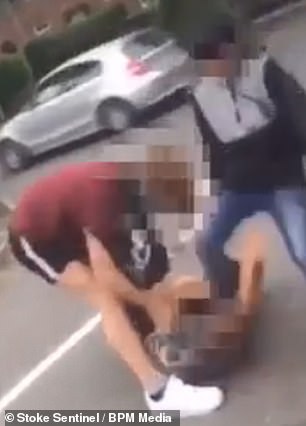 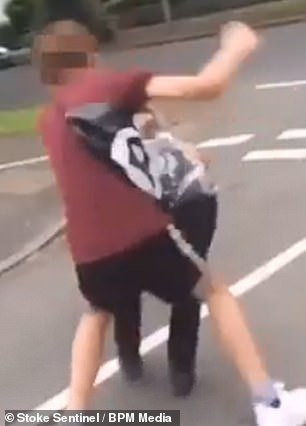 While Adam, a Trentham High School student, writhes on the ground third and desperately tries to shield himself from the blows, a third person stands by and films the assault

But when his friend left, the older boys set upon the now vulnerable school student.

Eric said: 'It's not the first time this is happened, he's been jumped twice before but never has it ended up online.

'All the time young lads seem to be jumping each other and if it isn't fighting, it's knives. This time he was out with his friend who said something to a lad about his mum.

The dad-of-three added: 'He walked home and as soon as he got in he went straight to his room and just said "if anybody knocks, I'm not here".'

'He didn't say anything to us about what happened. We didn't know what had gone on until his friends knocked on the door to ask if he was OK. 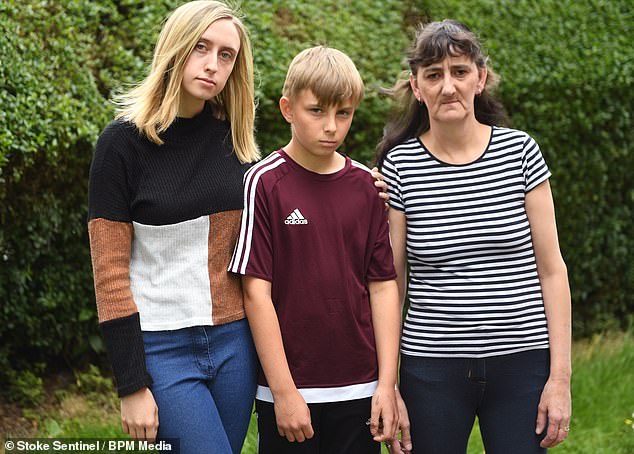 'I went upstairs to ask him what had happened. He'd had a nose bleed and when he went to school this morning he had a bad neck. If the pain carries on I will have to take him to A&E.

'My son is no angel himself but he doesn't deserve being beaten up for no reason.'

Adam's mum Kay says she is now scared to let Adam out of the house.

The 48-year-old said: 'In the video Adam doesn't retaliate. I was devastated watching the attack, it's so aggressive.

'The lads are older than him too. If this doesn't stop somebody is going to get hurt. Adam says one of the lads even had a knife.

'It's disgusting that somebody got a camera out and then posted it online. Around 50 people have seen it and it's gone around the school.

'It makes me feel like I don't want to let him out of the house because every time he goes out he's getting hurt, but that's not fair on him.'

A Staffordshire Police spokesman said: 'We received a report at 9pm on June 19 of an allegation of an assault against a 12-year-old boy in Stoke-on-Trent.

'The incident took place at around 6pm on Alder Walk in Trent Vale. The victim sustained minor facial injuries.'