Getting wind power in your garden really isn't a breeze

Getting wind power in your garden really isn't a breeze: 'My chickens will lay golden eggs before a £130 turbine powers the family home!'By Toby Walne, Financial Mail on Sunday Published: 21:53 GMT,

Getting wind power in your garden really isn't a breeze: 'My chickens will lay golden eggs before a £130 turbine powers the family home!'

Balancing precariously at the top of a stepladder clutching an unwieldy wind turbine in my arms, I am attempting to do my bit to save the planet – and it is all going horribly wrong. I am keen to install a wind turbine in the back garden of my four-bedroom home in Hertfordshire. But it's proving difficult.

The Prime Minister has said that wind turbines will power every home in a decade. Yet experts are divided over whether he is genuinely heralding a brave new ecofriendly world or spouting hot air.

Nonetheless I am keen to summon the forces of nature to see how easy it would be to install a wind turbine in my back garden. 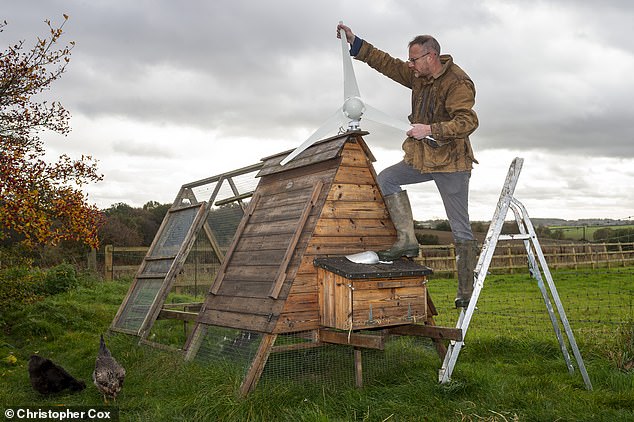 Foxed: Toby Walne struggles to rig up a turbine to power an electric fence

Already, my ambition to plug into the National Grid to earn myself money from 'free' wind is being challenged from all sides. Apparently, I need an open field – not just a garden – to make it worthwhile generating electricity.

I refuse to be thwarted. I can still fit a 4ft-wide turbine to power an 'off grid' 12-volt battery supply – ideal for home security lighting or providing power for the garage and my man shed.

Yet even this has become a struggle after blowing my shoestring budget of £130 on a 13-kilogram windmill – and discovering I might not see change from £1,000 to get it professionally installed.

Unfortunately, the 15ft wooden pole I have set in concrete at the bottom of the garden is woefully inadequate – and bends dangerously as I attempt to position the turbine on top. Instead, I position the three-bladed turbine on top of the chicken coop that houses four prodigious egg-laying hens. Here, it can generate enough juice for an electric fence to keep out foxes which have taken an annoying liking to my hens. Not quite what I had planned. But it's a start.

My wind turbine project had begun with a call to Jeff Clarke, renewable energy adviser for EnergyMyWay in Hertfordshire. He did not mince his words. 'Despite the Government posturing about investing in renewable technology, it has behaved disgracefully – axing grants that incentivise the installation of wind turbines.'

Could you cut your energy bills... or help the planet and go green?

Millions of people could be needlessly overpaying for their energy as they fail to switch to providers who offer cheaper deal.

They may also be missing out on the opportunity to help the planet and fight climate change, by switching to green deals that offer electricity from renewable sources and more environmentally-friendly gas.

With our partner, Compare the Market, you can compare energy tariffs and exclusive deals.

Why not find out if you could save hundreds of pounds a year on your energy or go green?

>> Check to see if you can start saving money now

Clarke says the most efficient home-installed turbines are best suited for large properties such as farms where there is enough land for poles more than 65ft high that will not bother the neighbours.

These can cost £25,000 and generate 9,000 kilowatt hours a year in a windy position – more than enough energy for the average home.

There is also a 'smart export guarantee' (SEG) grant available that might generate a small sum – as little as £100 a year – for any spare electricity fed into the National Grid.

Clarke said: 'Just do the sums. For most homes, a small turbine that powers 12-volt batteries is the only practical option. Most can forget about creating mains electricity.'

He pointed me in the direction of a company called Leading Edge in Pontrilas, Herefordshire. It sells turbines from just under £700 – though with add-ons such as a pole, battery, diversion controllers to handle any excess power, plus installation, I might not see change from £2,000. I was warned, too, about planning rules.

A turbine must be no more than about nine feet above a chimney at its blade top if located on a house – and can only be put on a detached property if situated at least 16 feet from the next-door neighbour. Pole mounted turbines at the bottom of a garden must be no more than 36 feet high – and about the same distance again to the boundary with neighbours.

Mary Black, marketing manager at Leading Edge, said: 'Off-grid wind power can provide a solution for a wide range of needs – an allotment water pump, outside lighting or power tools in a shed. But those in built-up areas will struggle to get 'clean air' for a turbine because of buildings in the way.' She suggested using the website Global Wind Atlas and tapping in my postcode to find out how exposed my property might be to the wind.

Unwilling to spend £2,000, I tried my luck on the internet – eventually gambling on a cheap three-blade 'Foraver' that claims a daily output of 1.4kWh – 'perfect for green windmill homes and businesses'. To put this into perspective, it takes ten hours for a 100-watt light bulb to use up 1 kWh of energy.

Although the Chinese instructions were incomprehensible, the Foraver is a solid piece of kit. But when I go from diagram '7' of a bolt-together Meccano set to diagram '8' of a wind farm, my suspicions are raised. It had come with a base plate and controller to wire up to a battery, but nothing more. No pole, no extra cabling and no battery.

In desperation, I turned to an old car battery sitting in the garage, bought £20 of cabling from a DIY store, and avoided the need of a pole by sticking the turbine on top of the hen house. It was not long before the turbine whirred into action and it started to charge the car battery. Within hours, the electric fence was fizzing with energy. I could imagine the local foxes howling in frustration.

Humbled by the challenges of creating energy from wind in my garden, I now appreciate why the solution to Britain's energy crisis lies in offshore wind farms.

There are already 7,000 offshore wind turbines – often 500 feet tall with blades that span 250 feet and turn 20 times a minute. It is these that Johnson is banking on to create a more eco-friendly future.

The Government has pledged £160million towards such offshore installations, but experts believe the Prime Minister's claim that all homes could be wind-powered by 2030 will cost at least £50billion.

Currently, wind turbines generate about 10 per cent of the country's electricity. The odds of them being able to power all our homes by 2030 are as likely as my turbine-charged electric fence not just keeping out the foxes – but getting the hens to lay golden eggs.

GET GREEN ELECTRICITY AN EASIER WAY

Electricity suppliers are encouraging customers to sign up to eco-friendly tariffs, paying for power generated from natural resources such as giant offshore wind turbines rather than fossil fuels.

Good Energy takes more than half its energy from wind turbines. It charges £1,420 a year for using 7,000 kWh in a four-bedroom home on its flexible green energy deal. This is about £50 a year more than for a competitive standard alternative.

Juliet Davenport, founder and chief executive of Good Energy, says: 'Although you might not save money installing a wind turbine in your garden, you can still support this great power source by signing up to an energy deal like ours. We pay wind farms and individuals with wind turbines for the power they generate – then sell it to customers.'

She warns: 'It is important to check with a supplier exactly how it earns its environmental-friendly credentials as some simply use the label 'green' as a marketing gimmick and do little to seek out renewable energy sources.'

THIS IS MONEY PODCAST

Five reasons NOT to start overpaying a mortgage

William Simons who starred in Heartbeat as PC Alf Ventress...

How humbling that my Les Miserables hit has helped fight...

The state of the special relationship between Britain and America under a Biden...

Wealthy man shudders at a working farm's compost loo during...