Cameroon players shouting ‘this is a WHITE World Cup’, their fans fighting in England's hotel and a coach telling his crying side the referee was biased… the inside story of a match which shamed women's football

By Ian Herbert In Valenciennes For Mail Online

England sensed even before they had left their base in northern France - the Royal Hinault Hotel and Spa, a recently converted hospital – that they could be in for a difficult afternoon.

The teams were, unusually, sharing the same hotel and though Phil Neville’s players tried to soak up the Cameroonian noise and colour – their loud sound system playing as they headed out to training on Saturday and dancing in the corridors - there was a bizarre scene just before they set off for the round of 16 match.

Cameroon fans had somehow got into the lobby and were fighting between themselves over tickets – for a game that was not even sold out. 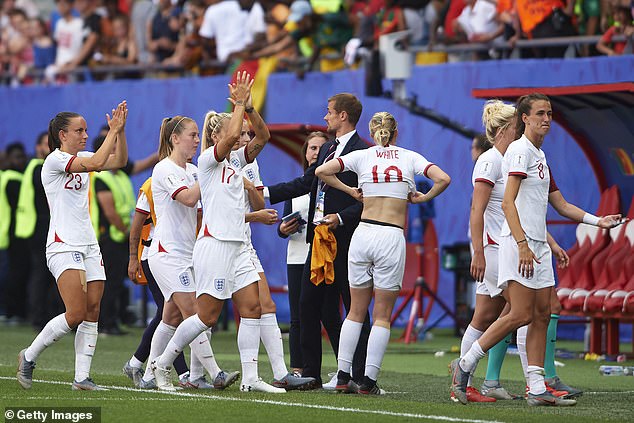 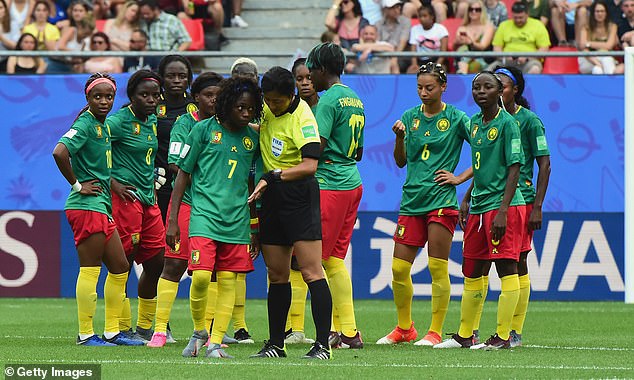 Cameroon manager Alain Djeumfa goes by the name of ‘Mean Dog’ and he had been less than complimentary about England the night before the game. Neville’s team had ‘many’ weaknesses, he said.

Neville made light of this when he arrived to talk an hour later, joking that ‘he said nice things about me.’ The Cameroonian had actually seemed to imply that everything Neville achieved as a Manchester United and Everton player counted for nothing, now he was in the dug-out.

There is a history of Cameroonians feeling they are victim of refereeing conspiracies at World Cups. It’s exactly what the men’s team said at the 1990 World Cup, where they met England in the quarter finals.

Their sense of victimhood this time stemmed from the indirect free-kick awarded on the edge of the six-yard box, from which England opened the scoring, after defender Yvonne Leuko had passed back to the goalkeeper. Djemba later claimed this was ‘wrong decision’ though it was impossible to see how.

There were some challenges which bordered on assault in the early stages – including a malicious elbow in the face for which Leuko should have been dismissed. Then Ellen White’s goal on the stoke of time, initially flagged offside, was correctly judged legitimate by VAR and all hell let loose. 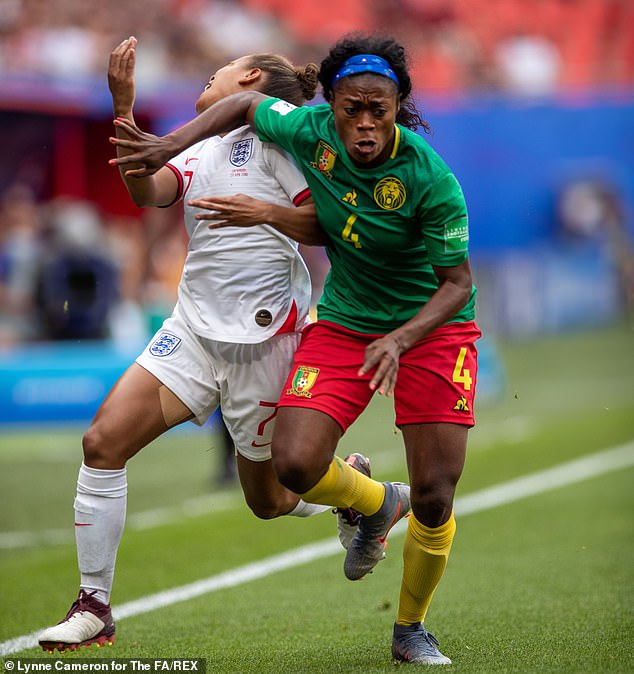 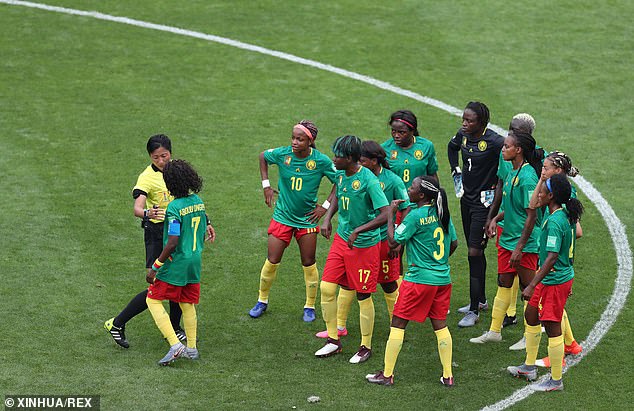 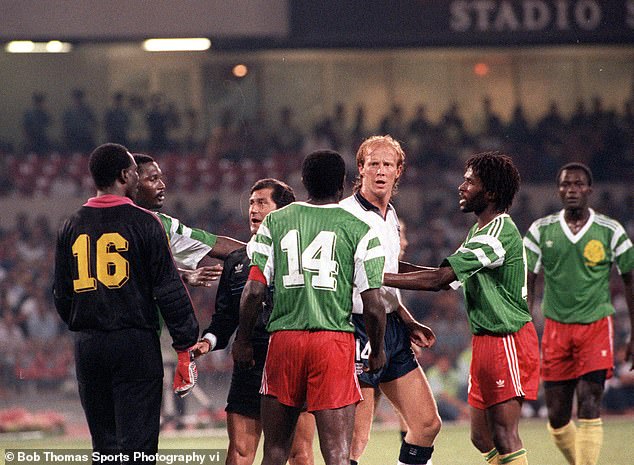 Speaking after the match, he said: 'We've had seven million people watching us playing an international game against Cameroon with that behaviour.

'I think it's pretty sad. That's how I felt on the touchline. Their team mirrored their manager.

'If my team played like that they would never play for England again.

'We're here to promote women's football, we want the image to be good for the little girl playing in the parks. To have two African teams in the knockouts is fantastic. They will learn, I hope.'

The Cameroon players massed in the centre circle, pointing at the screens replaying White’s goal and remonstrating with referee Qin Liang. It is understood that they sensed a conspiracy because the VAR deliberation footage was not being replayed, once the goal had been allowed to stand.

The team refused to re-start the game, eventually did so, and when half time was called took several minutes to leave the field. It was in the tunnel at this stage that players began making claims about some kind of a racist conspiracy.

The correct VAR decision which sent Nigeria home seems to have been on their minds. Several of the England contingent heard shouts from the Cameroonians that this was ‘a white World Cup.’

Djeumfa would later take the credit for persuading his players to stay on the field and return for the second period. ‘We might have had the moment to walk off, but thanks to God I was able to remain calm. I was ultimately able to keep my cool,’ he said.

But he seems to made minimal attempt to take the sting out of the situation. In the dressing room at half time, he seems to have fuelled the players’ sense of victimhood, telling them that ‘the referee wants England to win today.'

Midfielder Raissa Feudjio said he told them: ‘Don't worry about this. Your job is to represent your country. So you have to go back out and play.’

For reasons that remain unclear today, the players were back out for the second half early and clustered in the centre circle again. Within minutes they had scored, with England’s concentration clearly affected by the histrionics, and that goal – fractionally offside - was chalked off.

Feudjio claimed – incorrectly – that ‘the referee refused the goal without even checking.’ At the core of the controversy was the Cameroonians’ apparent lack of awareness about how the VAR system actually works, though they had received the same briefings as everyone else. 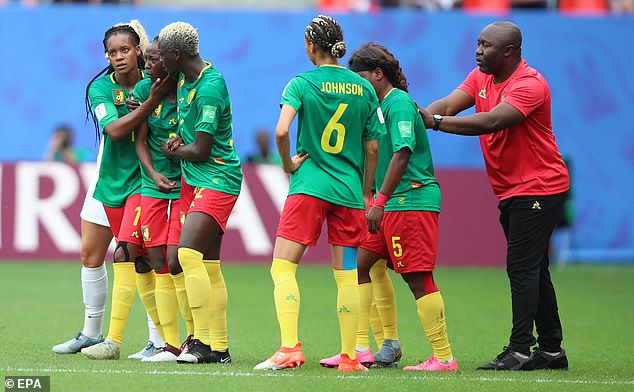 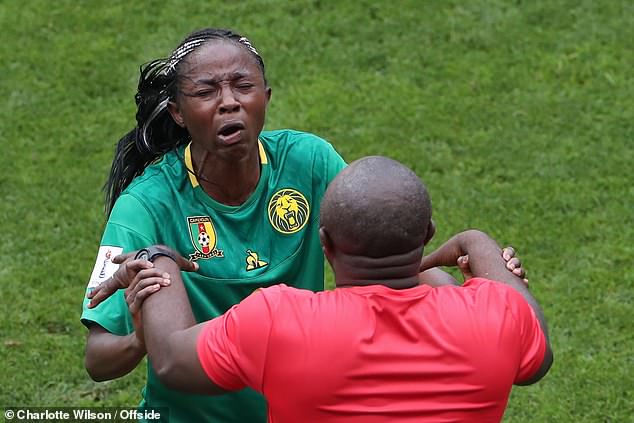 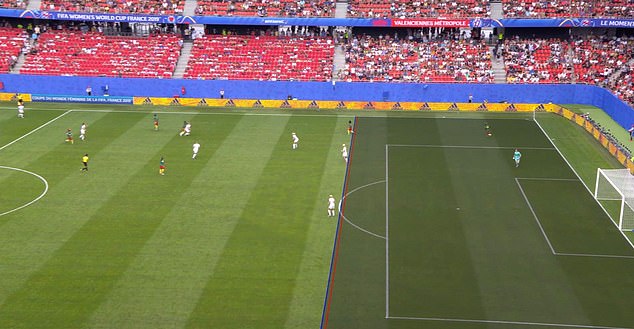 Goalscorer Ajara Nchout was the most incandescent – first, screaming at the Chinese referee, then weeping. Djeumfa embraced her – trying to calm her down. ‘We didn't want to play any more. We just wanted the game to be over,’ Feidjio reflected later.

Cameroon’s best player, Gabrielle Onguene, seemed to be trying to bring Ajara to her senses, physically dragging her back onto the field, staring into her eyes and shouting. Even England’s players contributed to an attempt to calm her down. Keira Walsh approached and consoled Ajara.

Cameroon’s own fans appear to have taken things into their own hands. FIFA relate that a group of them occupied an area behind the dug-outs – seemingly to throw abuse at the England substitutes and coaching staff. Stewards who tried to move them and break up this ‘fan block’ were subjected to verbal abuse.

The game was out of the Qin’s control. She and the VAR officials seemed simply to be trying to keep the African nation on the field, regardless of their actions. Augustine Ejangue seemed to place her studs into Fran Kirby’s foot as she set up substitute Jodie Taylor for a chance.

Arguably the afternoon’s ugliest moment came at the death. Houghton was hauled over the touchline by substitute Alexandre Takouda, who stamped on her foot in the process. This looked like an act of unadulterated aggression from Takouda who yelled abuse at the England bench. 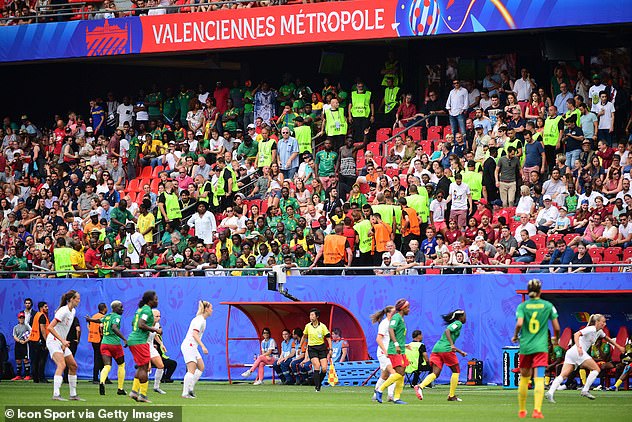 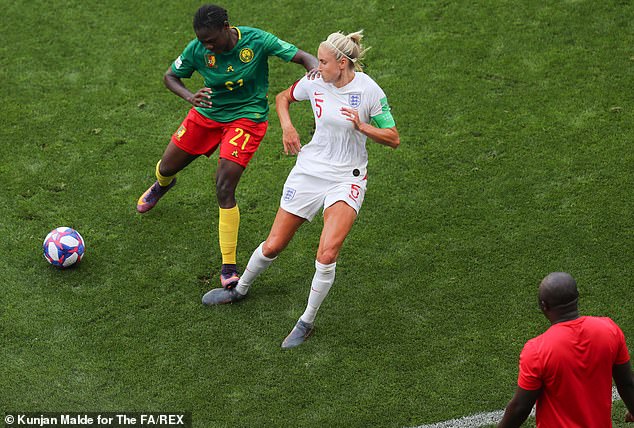 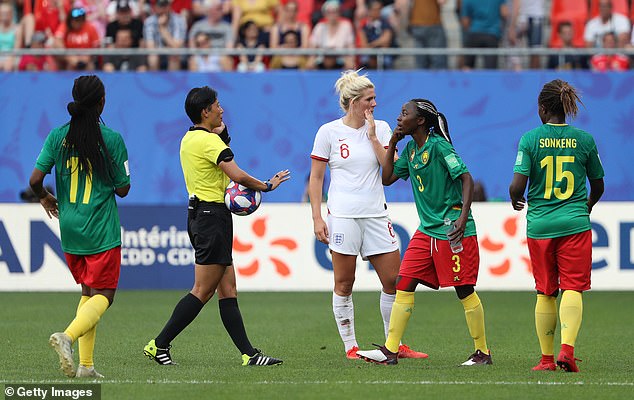 The England players did shake the hands of their opponents but the tension remained palpable. A group of England fans left the ground under police escort, for their own safety, owing to their proximity to Cameroonian fans.

The Cameroon players are contractually obliged to leave the field through the media mixed zone, though virtually none of them did, leaving the local organising committee to say there was nothing they could do to force them.

At his press conference, Djeumfa was in an extraordinary state of denial – refusing to discuss precisely what evidence of a conspiracy against his side he actually had, while praising his players for finishing the game.

The drama subsided as quickly as it had ignited. Though the prospect of returning to the shared hotel seemed an ominous one, Neville’s players did not run a gauntlet back at the Royal Hinault.

Cameroon fans in the foyer applauded them on their return. Neville and the players enjoyed their victory in the square here, where they watched France’s win over Brazil in one of the many bar areas. 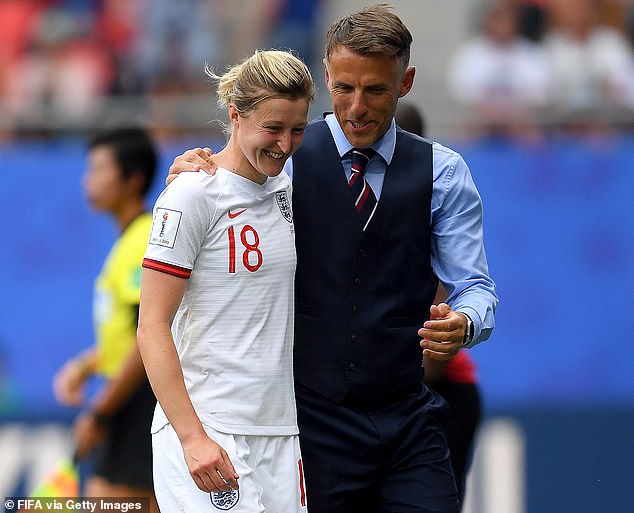 Despite the drama of the match, England's team headed out to celebrate their win on Sunday

HOW THE DRAMA UNFOLDED...

As half-time whistle blew, Cameroon players remained on pitch, appearing to be considering walking off the field.

50 mins: Cameroon have goal ruled out at 2-0 after VAR showed Ajara Nchout to be marginally offside.

68 mins: Jeannette Yango angrily pushes the referee in the back as Kirby runs away with the ball.

79 mins: VAR is consulted as Fran Kirby went down in the penalty area after being caught late by Ysis Sonkeng. The referee decides against a spot-kick.

90+10 mins: VAR gives Alexandra Takounda Engolo only a yellow after a horror challenge on Steph Houghton, catching the England skipper's heel with her studs.

Though the Cameroon nation’s arrival at the World Cup quarter finals had been a story of relative success against all odds, they may now face a possible temporary suspension from the game, as well as a heavy fine.

England player Chioma Ubogagu tweeted: ‘As someone with English, American, and Nigerian ties, I found it embarrassing watching a nation represent Africa like that.

'I also find it worse that people are defending it in my opinion. Because again, in my opinion, that to me means subconsciously you have and hold African nations at a lower standard.

'I understand the frustrations of football, I understand being in the moment, and I understand strongly disagreeing with VAR decisions, but behaviour in these times is still massively important.’

Travellers pitch up at Exeter Chiefs ground and demand...