Deputy headmaster shot and injured a pupil, 11, with an air rifle

Deputy headmaster's career in tatters after he admits assaulting pupil, 11, by shooting him with an air gun at after-school club when the boy asked what it would feel like 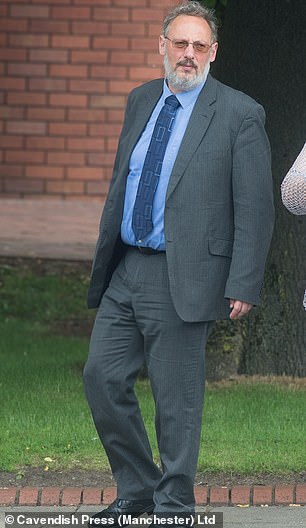 Simon Gitlin, 51, was overseeing the club at a preparatory school in Cheshire when the lad aged 11 asked what 'it would be like to be shot'

A deputy headmaster's 30-year teaching career lay in ruins today after admitted that he shot and injured a pupil with an air rifle during an after-school shooting club.

Simon Gitlin, 51, was overseeing the club at a preparatory school in Cheshire when the 11-year-old student asked what 'it would be like to be shot.'

The teacher replied 'it would bloody hurt' and then opened fire with the airsoft gun in front of other children and colleagues as the lad ran round the hall saying: 'Shoot me, shoot me.'

The boy was hit at least twice from a distance of 10-15 metres with the plastic bullets causing injuries to his stomach, arms and legs. He was not seriously hurt but was was said to be 'extremely upset' by the incident.

Gitlin was subsequently charged with assault by police and has since resigned from his position at the £12,000 a year school in Cheshire which cannot be named for legal reasons. 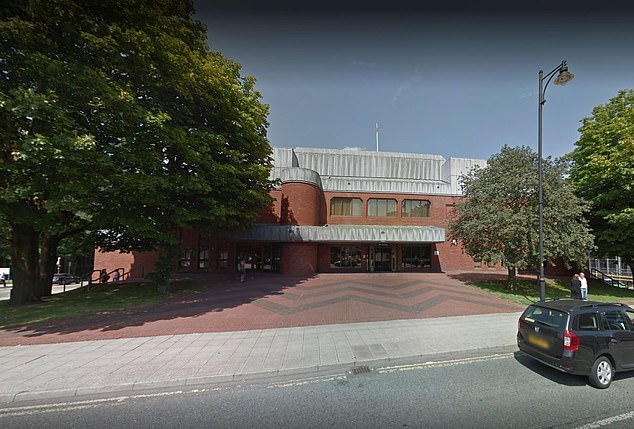 Gitlin was subsequently charged with assault by police and has since resigned from his position at the £12,000 a year school in Cheshire which cannot be named for legal reasons. Pictured is Stockport Magistrates' Court

At Stockport Magistrates' Court Gitlin, from Prestbury, near Wilmslow, wept as he admitted assault by beating but claimed the shooting was a 'momentary lapse of judgement' - saying he was going through an acrimonious divorce at the time and was not sleeping well.

He was ordered to complete 200 hours unpaid work and was ordered to pay the boy £125 compensation. The incident happened in a room full of other children and adults at 4.30pm on January 14 this year.

Prosecutor Miss Eileen Rogers said: 'He was overseeing a shooting club at the time. The pupil was also there in that shooting club taking part in that activity.

'He was operating an air rifle when one of the students asked the teacher what it would be like to be shot by it. He replied it would "bloody hurt" to which the young pupil responded "shoot me", running around the hall and repeating the phrase a number of times.

'He was 10-15 metres away he pointed the airsoft gun at him and fired it one or two times and one or more of the plastic bullets hit the young pupil and caused some injuries.

'He immediately went to check he was okay and apologised to him and at that point the pupil left the room.

'Mr Gitlin said he was sorry and he shouldn't have fired at the young man.

'The boy had several red marks on his stomach, his arms, and his legs. You wouldn't expect it to happen on a school premises and there is a lasting effect on him.

'Mr Gitlin is greatly remorseful and has no previous convictions.' 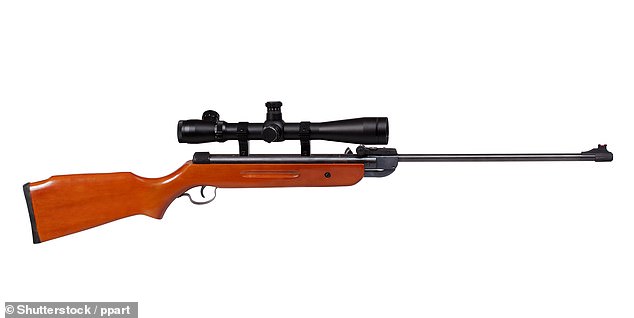 At Stockport Magistrates' Court Gitlin, from Prestbury, near Wilmslow, wept as he admitted assault by beating but claimed the shooting was a 'momentary lapse of judgement'. Stock picture of an airsoft rifle

In mitigation defence barrister Rob Lassey said: 'He made a full admission to police in the interview, expressed his remorse, and fully admitted responsibility for the offence.

'He simply made the wrong choice at the time - it was a very poor judgement call, a momentary lapse of judgement, he has apologised in writing to his parents on a number of occasions.

'He has resigned from his position at the school a couple of weeks after this incident - his teaching career is almost over - after 30 years' experience that will cause a significant blow to him.

'At the time he was a deputy head teacher at the school he had an unblemished record.

'He was engaged in a number of extracurricular activities all of them relating to children.

'He spent 20 years volunteering with St John's Ambulance, he is the leader of a local youth group called Jewish Boys and Girls Brigade. He was the pastoral leader at the school where he worked and he was well known in that capacity for being the one the children could go to if they had a problem, he was engaged in search and rescue, he helped at various after school clubs not least at this one.

'He is determined to make a positive influence on his community.

'At the time he was going through a very acrimonious divorce from his wife of 17 years.

'He was under enormous strain both emotionally and financially, he was fighting an ongoing custody battle.

'The stress of the finances and the divorce he was going through resulted in him not sleeping properly - he is now seeking help and is on medication from the doctor.

'He didn't seek help at the time and let it bottle up inside him - a pressure cooker of circumstances.'

Gitlin will also have to complete 20 days rehabilitation requirement as part of a 12 month community order and will pay £85 prosecution costs.

Pictures reveal the marks left by a Portuguese Man O'War...