Last Updated: 16/11/20 1:38am DeAndre Hopkins hauled in a stunning 43-yard Hail Mary pass from Kyler Murray for a touchdown with two seconds left as the Arizona Cardinals triumphed 32-30 over the Buff 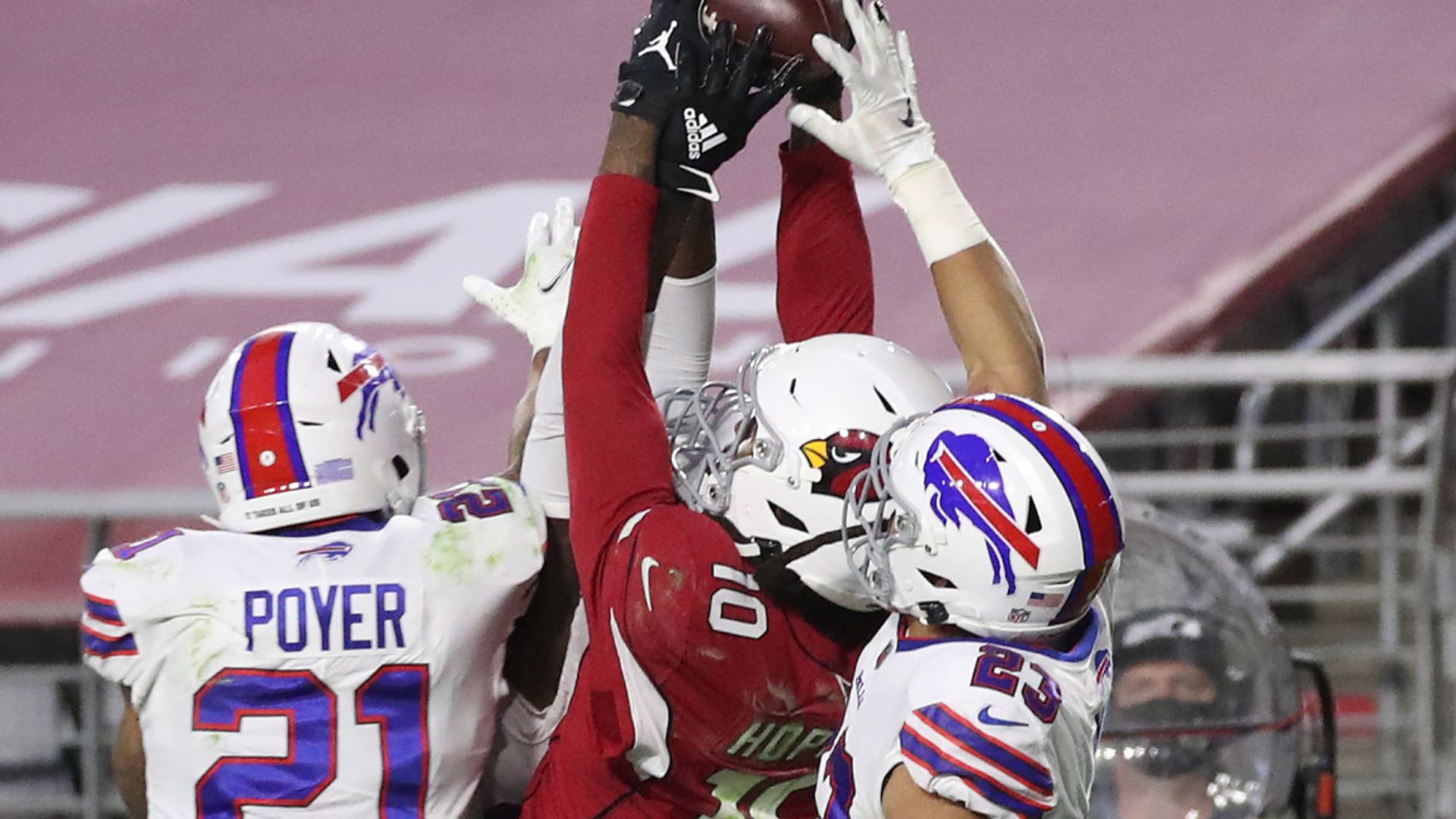 Arizona Cardinals come back from trailing 23-6 in the third quarter, with Kyler Murray rushing for two touchdowns - extending his streak to five-straight games - and then throwing a 43-yard Hail Mary touchdown pass to DeAndre Hopkins with two seconds left

DeAndre Hopkins hauled in a stunning 43-yard Hail Mary pass from Kyler Murray for a touchdown with two seconds left as the Arizona Cardinals triumphed 32-30 over the Buffalo Bills in a thrilling finish.

Bills quarterback Josh Allen had just thrown a 21-yard scoring strike of his own to Stefon Diggs with 34 seconds remaining to put Buffalo up 30-26, only for Murray to unleash a beauty of a deep ball three plays later and for Hopkins to come down with the catch under triple coverage.

Murray threw for 245 yards, one touchdown and one interception. He also rushed for 61 yards and two third-quarter scores which kick-started the Cardinals comeback after they'd trailed 16-9 at half-time and then 23-9 early in the third.

In doing so, Murray became just the fourth quarterback in NFL history to score a rushing touchdown in five consecutive games.

Allen had 284 passing yards for the Bills, with two touchdowns with two interceptions. He also led his team with 38 rushing yards on seven carries and caught a touchdown pass off Isaiah McKenzie that gave Buffalo a 7-3 lead in the first quarter.

That was the biggest thing of note from a fairly cagey first half in which these two explosive offences and quarterbacks took time to settle; there were a total of six field goals in the first half, with Bills kicker Tyler Bass successful three times from more than 50 yards.

Kenyon Drake had an impressive afternoon for Arizona, racking up 100 rushing yards on 16 carries, but a fumble early in the third quarter allowed the Bills to build on their seven-point halftime advantage as Allen found Cole Beasley for a 22-yard TD to see Buffalo up 23-9. Beasley caught 11 passes for 109 yards and that score.

The Cardinals pulled back to within six on their next possession when Murray found the endzone from down near the goal line. Following a further Zane Gonzalez field goal, and a Patrick Peterson interception of Allen, Murray scored again on a 15-yard scamper to see his team into the lead.

Both offences misfired for most of the fourth quarter - the two QBs throwing interceptions - but then Allen engineered a 12-play, 78-yard drive in the final minutes, one which culminated with his 21-yard TD toss to Diggs, who had 10 catches for 93 yards on the night.

But, with 34 seconds left on the clock, Murray got into position for a late Hail Mary shot to the endzone, and Hopkins - who finished 127 receiving yards - went up and grabbed his seventh and most important catch of the night to win the game.