Last Updated: 01/12/20 10:50am It generated a truly iconic and everlasting image when Steve McQueen ultimately failed to clear the wartime fencing on his Triumph TR6 Trophy, but that Great Escape was 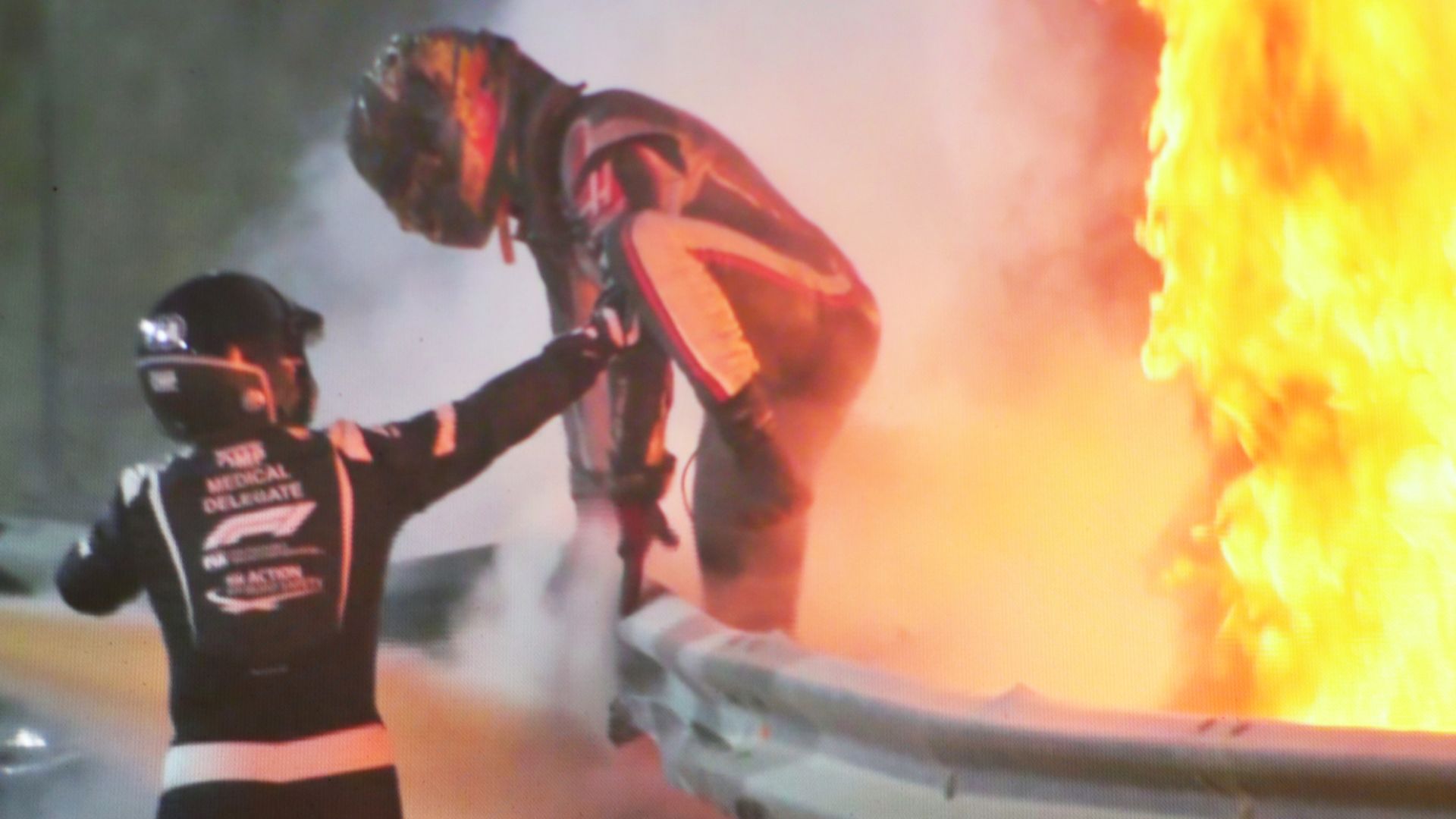 In his latest column, Martin reflects on what happened in Romain Grosjean’s horrifying accident, the safety aspects and brave reactions that helped save the Frenchman’s life, and the lessons that will be learned

It generated a truly iconic and everlasting image when Steve McQueen ultimately failed to clear the wartime fencing on his Triumph TR6 Trophy, but that Great Escape was undoubtedly surpassed in every way on Sunday evening in Bahrain.

Romain Grosjean must have had his lucky fireproof socks on, one of which was clearly visible as he jumped the very piece of crash barrier he had just prised open like a tin of soup with his Haas F1 car.

The incident was triggered by the cars ahead of him when a slow-starting Valtteri Bottas was being mugged by the midfield pack, who in turn were tripping over each other in their frenzy to make up places.

Grosjean saw both a threat and an opportunity ahead of him as he instinctively tried to pass them on a clearer path to the far right. It was a dramatic move across the track which unfortunately contained the front wheel of Daniil Kvyat's AlphaTauri.

Now the Haas was spearing heavily right as Kvyat was swearing about him over the radio. Until he saw the fireball in his mirrors that is.

The minimum weight of an F1 car is 746 kilos, plus at the start of the race over 100 kilos of fuel, and some allowance for consumables such as fluids and brake material. So well over 850kgs travelling at 137mph at 40 degrees to the barrier, which itself was angled towards the track to form a service access road for emergency vehicles and recovery.

I'm going to presume that the race specification Armco barrier has been in place for 16 years since the track was built, but this venue is immaculately maintained in every way. I don't believe a three-layer barrier can resist that kind of piercing energy, or indeed should, without yielding in some way.

A wall would have moved a little but not opened up, but the peak impact loads would have been significantly higher, at which point fundamental survivability becomes an issue.

Tyre barriers are often placed in vulnerable areas, usually contained themselves within a conveyor belt of tough material. Alternatively a number of layers of specialised Tecpro or Safer barriers can be used to significantly soften the blow in a controlled manner, but cars can bury a long way into these as we saw for example with Bottas in Mexico last year, and Carlos Sainz in Sochi in 2015.

But all these solutions tend to be in and around corners and heavy braking zones, and Grosjean crashed on a straight. The softer solutions can initially drag a car in and then rebound it across the track, and the cost of 6.6 miles of material to line both sides of this circuit would be massive.

His trajectory across the track and times the weight and speed all added up to a huge crash, and car design and track furniture can only do its best to absorb such energy, it can never be 100 per cent safe.

What I simply can't fathom out is how he stayed conscious throughout given the 53g deceleration within a very few metres including partly passing through the barrier and its uprights.

With the car ripped in half the fuel tank and batteries were now exposed along with a hot turbo and other items, inevitably creating an instant fireball.

The nose, chassis, Halo and rollover hoop clearly took enormous loads in arresting the car whilst protecting the driver. The triple tethers on the front wheels shredded like angel hair pasta, but at least, along with other parts, helped dissipate some of the enormous energy.

The significant ERS battery pack went into a thermal runaway and actually spent some time calming down.

The fact that Romain was alert surely saved his life.

He initially struggled to take the steering wheel off because of other damaged parts, and as we know when we see the drivers post-race exiting the cars, clearing the headrest and managing the radio and drinks tube whilst wearing a crash helmet and HANS device is quite a contortion even when the car is on the level and there's no panic.

The second miracle was that the survival cell was largely intact and therefore he had no broken bones, particularly arms, legs and feet, enabling Romain to find a way out. The chassis was just far enough through the barrier to allow him space but extricating him if he was unconscious would have been near impossible in a reasonable time among the flames.

By now the medical car which starts at the back of the grid had arrived. Luckily this was only turn three of the race so it wasn't too far behind and Doctor Ian Roberts jumped straight out and bravely headed directly towards what can only be described as a bomb.

Medical car driver Alan van der Merwe had his brain fully in gear and grabbed an extinguisher which he also used to dowse the emerging Grosjean down.

Pivotal to all this was Corporal Thayer Ali Taher who crossed the track after the pack was gone and the medical car had stopped, his extinguisher appearing to create a protective cell around the cockpit zone.

Another marshal Sergeant John Matthew on the other side of the barrier was effective too. Both men were from the Bahrain civil defence and were promoted the very next morning, Taher to Sergeant and Matthew to Sergeant Major.

The Medical Car team are primarily there to attend to injured drivers, although they are clearly equipped to play a role in any rescue too. Open face helmets indicate that wading into such a scene would not normally be anticipated. A brilliant and fearless job by both of them.

For 2020 the fire endurance of the three-layer driver overalls has been improved, and although it's made some of the drivers feel hot, they'll be thankful now. Gloves need to have good feel for the numerous steering wheel controls and clutch and gearshift levers, but presumably in due course they will gain further protection.

Similarly fireproof racing boots, which are more akin to slippers, need to fit into a confined pedal area and generate excellent feel and feedback for the driver. They will be reluctant for those to become too cumbersome.

Once again congratulations to the FIA and teams for creating such a survival cell. No doubt in months to come there will be conclusions and actions from this incident.

Kvyat's front left wheel wasn't finished yet in terms of affecting the race. On the restart, through turns six and seven Lance Stroll had been in a scuffle in his Racing Point and into the braking zone for turn eight Kvyat was able to run up the inside of him, albeit rather half-heartedly.

Stroll wasn't aware he was there and turned into the hairpin, Kvyat couldn't get out of the way far or fast enough, and the Racing Point was tipped into a roll as the wide sticky tyres made contact. It looked dramatic and thankfully the upside-down Stroll was just fine, but you can get more loading than that into your body at a decent fun fair.

What it did signal was the beginning of an awful race for Racing Point.

Lewis Hamilton had the race fully under control for the duration, only failing to lead every lap because he pitted on lap 19 to Max Verstappen's lap 20. It was a masterclass from both of them, Lewis's calm authority and Max's relentless pursuit.

Alex Albon chalked up a timely second podium, ironically at the cost of Sergio Perez who fancies Alex's Red Bull drive when his own Racing Point blew its Mercedes engine three laps from home. He was a classified runner and so the only two who didn't finish were Grosjean and Stroll who were out before a single complete flying race lap was completed.

McLaren had a great evening. Lando Norris was lucky to get a free nose change under the red flag from Grosjean's shunt, and drove beautifully thereafter. As did Carlos Sainz, who started 15th after mechanical issues in qualifying and somehow making the unloved soft tyres last until lap 21.

Fourth and fifth places generated McLaren a 17-point advantage over Racing Point and 27 over Renault with two races to go. Always remembering that both team cars can score constructor's points and so a maximum of 44 are available each race.

Bottas had miserable luck with a puncture after the second start to finish eighth, and Ferrari could only muster one point with Charles Leclerc at a track where they had dominant speed early last year.

It was interesting to observe the drivers during the long break to fix the barriers, many understandably looked shocked, especially younger men who haven't seen many motor racing fires and such devastating car damage. The older drivers with success and money behind them and a young family ahead of them will have been taking stock.

Impressively they all jumped back in a gave it full throttle. Romain paid the price with burned skin and I expect mental scars but thankfully survived, and much will be learned.

Such incidents remind everybody what gladiators these drivers are and how impressive F1 is all round.

With Hamilton absent for race two this coming weekend[1] on a significantly different track layout due to a positive Covid test the road is wide open for a different winner.