Brother jailed for wiring jihadi sister £2,350 to appeal his sentence

Brother jailed for wiring his ji

Brother jailed for wiring his jihadi bride sister £2,350 is to appeal his two-and-half-year prison term after the middle-class parents of Jihadi Jack avoided jail

By Duncan Gardham And Isabella Nikolic For Mailonline

Salim Wakil, 25, was jailed for two and a half years for sending his jihadi bride sister £2,350 to pay for people smugglers to bring her back home to Hampshire

The brother of a jihadi bride who sent her money to escape from ISIS is to appeal against his jail term after the parents of Jihadi Jack avoided prison with a suspended sentence.

Salim Wakil, a restaurant worker, was jailed for two and a half years in February after sending £2,350 to his sister in Raqqa so she could hire people smugglers to get her back home.

Whereas Sally Lane, 57, a charity worker, and John Letts, 58, an organic farmer from Oxford, were given a 15-month suspended sentence after sending £223 to their convert son in the hopes of 'luring' him away from fighting with ISIS in Syria.

It is thought the couple’s sentence could pave the way for a number of people jailed for sending money to extremist relatives to appeal and ask to be freed.

Wakil's sister, Sumaiyyah, had pleaded: 'I made a stupid mistake.

'I want to come home. You have to help me or I'll be stuck.

'The enemies are one kilometre away from the city.'

Wakil initially resisted her demands but eventually caved in and sent the money.

Like Jihadi Jack's parents, there was no suggestion that the Wakils had any sympathy for terrorism and during Wakil's trial the judge said: 'I do believe that your sister manipulated you'.

Miss Wakil had married Mehdi Hassan, one of the Portsmouth 'Britani Brigade', after running away from home in Fleet, Hampshire, aged 16 leaving her family a note.

Sources say Wakil is now set to appeal his sentence. 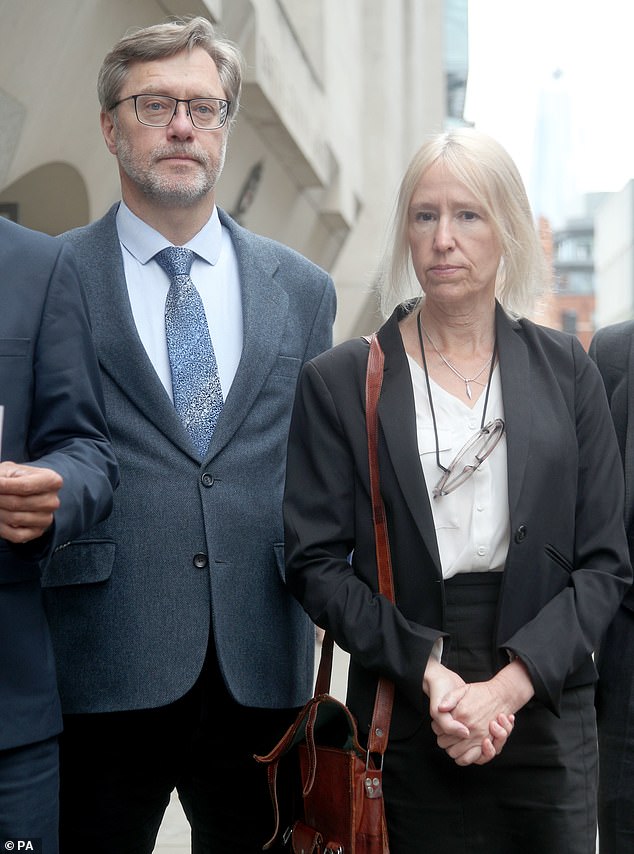 Jihadi Jack's parents, Sally Lane, 57, and John Letts, 58, avoided jail with a suspended sentence after sending their son £223 in the hopes of 'luring' him home from Syria 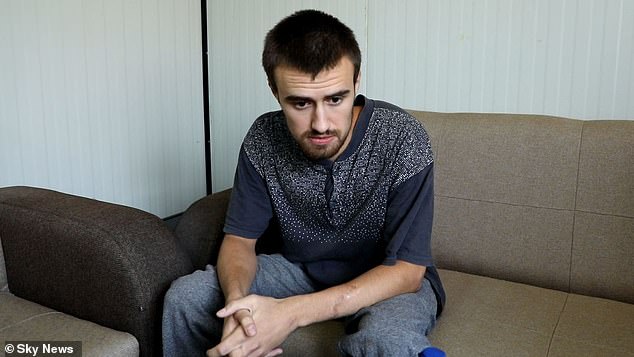 Like Jihadi Jack's (pictured) parents, there was no suggestion that the Wakils had any sympathy for terrorism and during Wakil's trial the judge said: 'I do believe that your sister manipulated you'

Despite being warned by police not to send any money to their son, Ms Lane decided to use money left to her when her father died to try and 'lure' him out of Syria, initially sending £223 to Lebanon from The Money Shop in Oxford on to pay for food and new glasses. 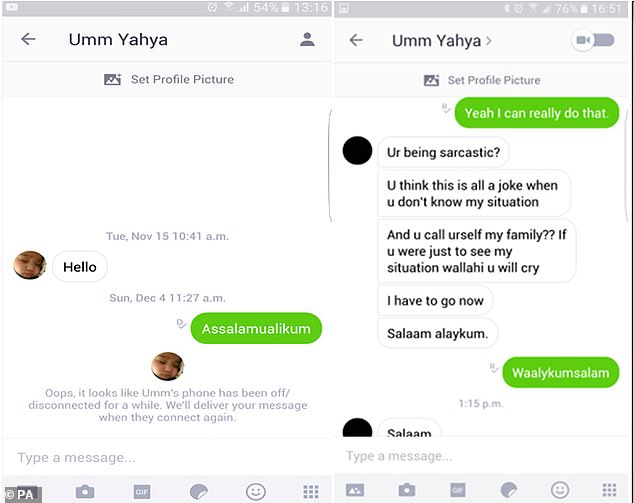 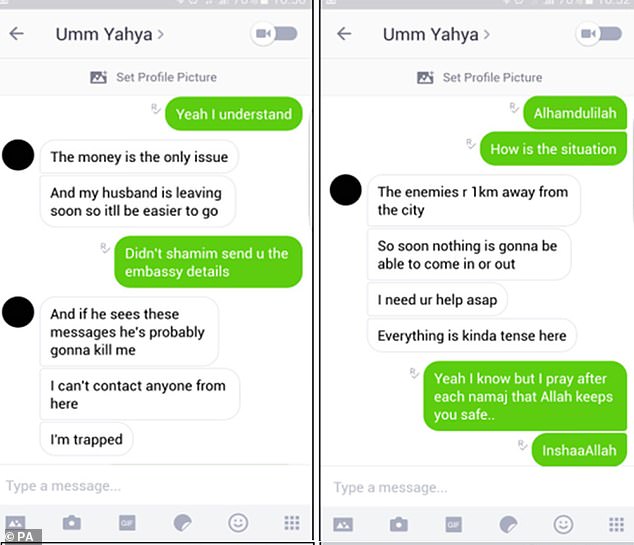 Sumaiyyah, whose messages are pictured, left the UK when she was just 16 in August 2014 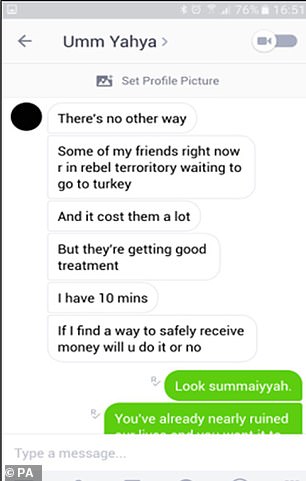 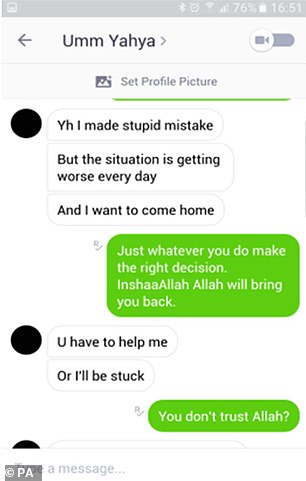 In messages they exchanged, Sumaiyyah told her brother she had made a 'stupid mistake'

Who else could appeal?

Nadeem Hussain, 38, was jailed for four years and eight months in 2017.

He had pleaded guilty to sending £4,000 to fund his brother Naweed Hussain, who is believed to have joined Daesh after travelling to the conflict zone in June 2015.

The cash was sent via a money transfer bureaus in Coventry over a period of three days in April 2016.

Her husband, Aine Davis, was a drug dealer who went to Syria to fight in July 2013.

Abdurahman Kaabar, 24, and Badroddin Kazkaz, 23, were jailed in January this year for a total of 12 years for sending Kaabar's brother money after he left the UK for Syria to take part in 'violent jihadi activity'.

They were told by police they should not send him money but on December 31, Sally Lane entered a WH Smith in Oxford and attempted to make a Western Union money transfer of £1000 to Lebanon .

It was blocked, but on January 4, 2016, she attempted two more online Western Union transfers of £500 each, using the name Nicola Thomas and giving a fake address in Coulston, Wiltshire.

When she was arrested, Ms Lane told police she had decided to 'accept the consequences' of sending her son money in order to get him out alive.

John Letts said: 'If I didn't act and something happens to him, how am I ever going to forgive myself?'

Judge Nicholas Hilliard QC told the couple they had 'nursed the hope' that their son was working as translator or administrator of some kind rather than a fighter.

But he said they should have realised that was not the case and added: 'It is one thing for parents to be optimistic for and about their children - and I do acknowledge that this was the son that you loved very much and it is in your nature to look for the best in others.

'But you did lose sight of the realities and ignored warnings of one kind or another.'

Sumaiyyah Wakil was 16 when she ran away from home in Fleet, Hampshire, leaving her family a note that she was going to join the fighting and warning them not to contact the police.

They sent her increasingly concerned messages to try and persuade her to return and her brother eventually sent $3,000 (£2,350) to pay for people smugglers. 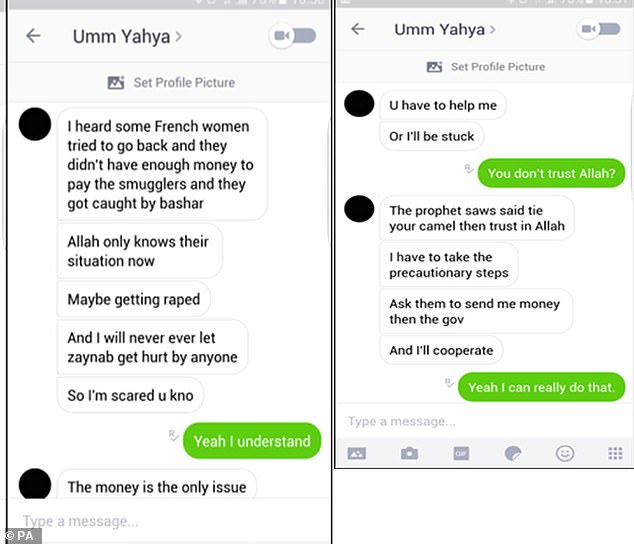 In one of the messages they exchanged, Wakil asked his sister: 'You don't trust Allah?' 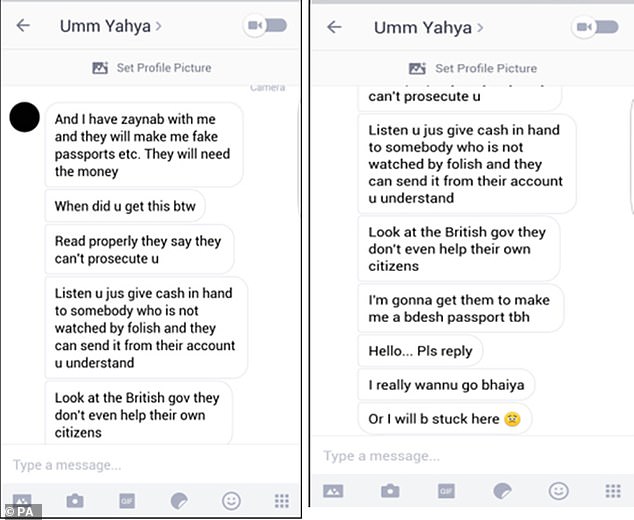 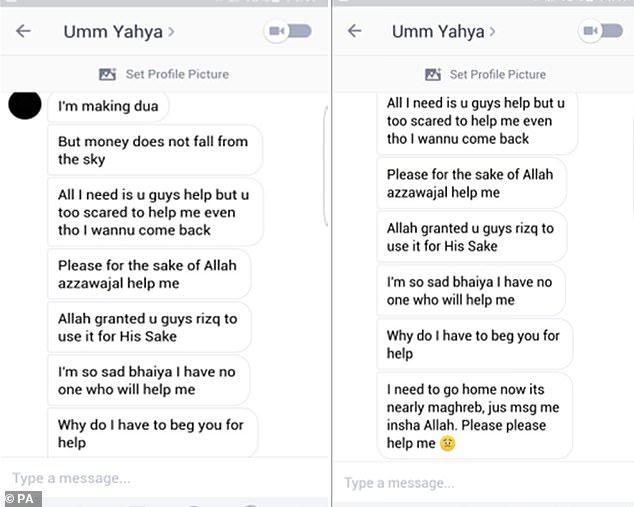 She took the money but never returned and  then asked for a further $3,000 after claiming her child was sick.

She was last heard of alongside hard core ISIS fighters in eastern Syria with her child and second husband.

The judge, Rebecca Poulet, said Sumaiyyah had put pressure on her 'naive' brother by playing on fears that ISIS's enemies were closing in when she actually planned to die as a martyr. 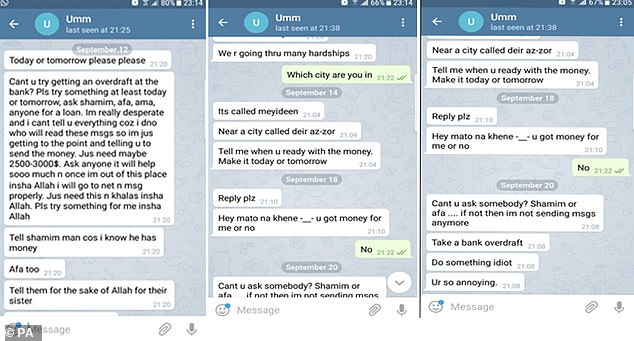 One message from Sumaiyyah urges her brother: 'Do something, idiot... ur so annoying'

'I do believe that your sister manipulated your reasonable and understandable worries about her and your young niece,' she told Wakil.

'I accept that although you should have realised the risk that the money would be used for terrorism offences, you genuinely thought it would be used to pay for smugglers.

'I accept, as well, that neither you nor your family are in any way sympathetic to the terrorist cause.'

But, jailing him for two and a half years, she added: 'Despite these significant matters in mitigation, I have to follow the sentencing guidelines and make it clear to others that sending money or property that will support a terrorist cause will not be tolerated.'

The judge said the Wakil family were repeatedly warned by police not to send money and added: 'You should have been, and in fact were, aware of the risk you were taking.'

John Simmons, defending, said Salim was mentally vulnerable, suggestible and had an IQ one point above a learning difficulty.

'People will see yet again the fall guy. That is what Sumaiyyah saw and she used him,' he added. 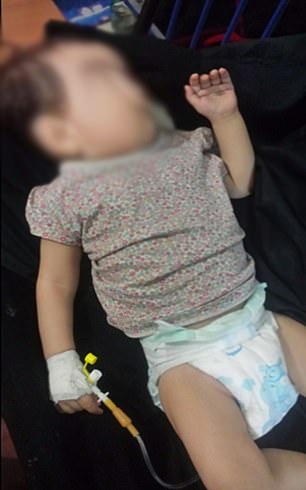 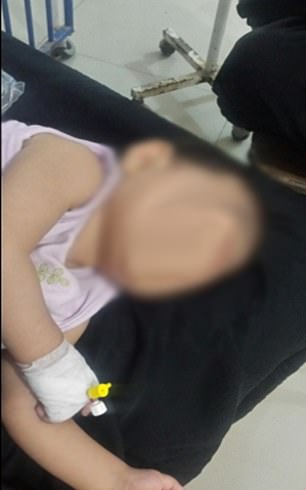 Pictures of Sumaiyyah's daughter with a drip in her hand, sent to Wakil in May 2017 to try to persuade him to send more money

Sumaiyyah had stayed in touch with her family by Whatsapp, the messaging service owned by Facebook, and used it to send her family a series of voice messages in which she ridiculed them for living in a democracy.

In one she told them: 'Guess what today there's going to be a stoning of a woman. Me and my husband are going to go and see it inshallah. So cool man.'

Following Hassan's death in October 2014, she threatened to become a suicide bomber because her family was refusing to speak to her online.

In one message she wrote: 'I want to die here. I don't care I want shahada [martyrdom].'

While claiming her child was unwell she said: 'She gettin worse. Do u have the money or no. Wallahi [I swear by god] I really need it.

'The situation is getting so bad. There's literally no food here. My daughter is gnna fricking die.'

This time her family refused to pay, but when police discovered the payments had been made, they charged Salim Wakil, Sumaiyyah's eldest brother, with funding terrorism.

It was not suggested the family has any sympathy for ISIS, and in one message her brother Shamim, begged an intermediary to send a message to her, saying: 'It's her life we're talking about. Please do it for her sake. We're completely against what all you khawwarij [extremists] are doing. Disgracing the name of Islam.

'Your leaders have brainwashed you all and you don't even know it, may Allah have mercy on you and my sister.'

Wakil claimed the money came from takeaway deliveries he did for his uncle but his bank records showed that he had received £1,525 from his brother Shamim, £585 from his mother and £500.20 in two fortnightly payments of Enhanced Employment Support Allowance.

Sumaiyyah Wakil left a series of voice messages for her family from Raqqa telling them how great life was and that she was not coming back.

A series followed on October 7 as her brother, Shamim, tried to persuade her to return: 'The UK government has said that they will strip any person who comes to Syria of their British citizenship so I'm not a British citizen.

She added: 'They are not living life normally, they are being watched 24/7, they can't even step one foot outside their house without someone following them. No.'

Shamim insisted: 'There's loads who have come back and living life normally. It's better than being under the rule of ISIS, who kill anyone who says anything bad about them.'

But Sumaiyyah demanded: 'Tell me where is the evidence for this. Everyone says that we kill people who are against us, how?'

She added: 'Nothing is better than being under the law of Allah, this is the shariah. What are you saying that the manmade law is better? You know this is kuff [disbelief], you made me commit kuff right now.

'Dawla [ISIS] are run by the law of shariah, what else do they run by? They don't run by kuffar manmade laws like in the UK which you are living under.

'Kuffar are ruling you. Do you think that Muslims who live under the kuffar have honour? They would have more honour if they lived under Islam and you are comfortable living under David Cameron and your Queen.'

In written messages earlier the same day, Shamim had begged: 'Russia started bombing, is it near you. You said they bombed your mosque. It's not safe, you need to come back.'

But Sumaiyyah insisted: ' I want to die here. I dnt care I want shahada [martyrdom].'

'What about the baby?' Shamim asked, referring to her unborn child.

'The baby will go with me,' Sumaiyyah said.

Mother, 36, accidentally took her own life 'in cry for...

Glastonbury festivalgoers will walk 30 miles during the...