British Museum launches exhibition on how it acquired colonial objects

British museum faces up to its c

The British museum is facing up to its colonial past with a new exhibition that explores how some of its most treasured artefacts were taken from other countries.

Collecting histories: Solomon Islands has been set up to explore how precious artefacts from across the world came to be at the British Museum.

The world-leading museum has long faced criticism over how it sourced its most prized possessions from former British colonies and beyond.

The biggest rows involve the Elgin Marbles, taken from Athens, the Benin Bronzes from Nigeria and Rosetta Stone from Egypt.

Leaders of countries including Greece, Chile, the Easter Islands and France have called on the UK Government to return items taken by the British.

But the new display, visitor trail and talks are designed to set the record straight. 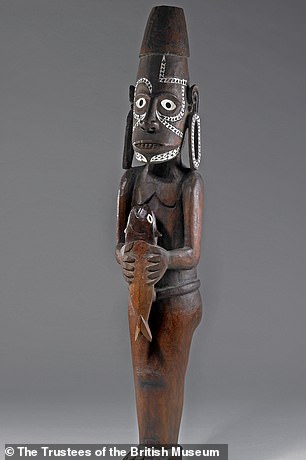 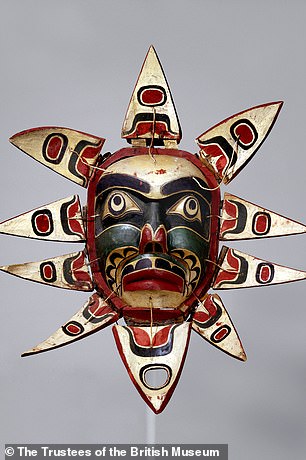 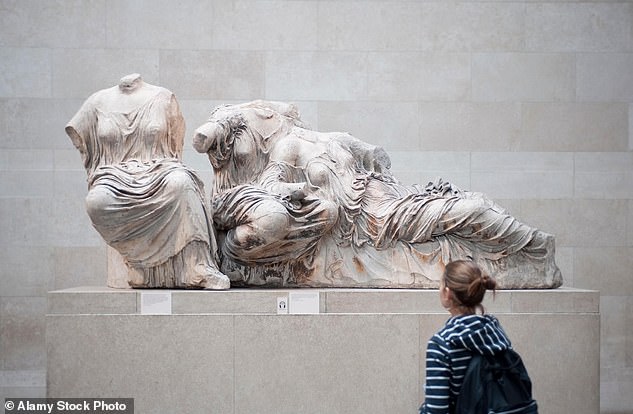 The biggest row to have embroiled the British Museum involves the Elgin Marbles, taken from Athens 200 years ago

The British Museum has one of the world's largest collections of objects and photographs from Solomon Islands, around 4,000 items, which have been acquired in a variety of ways over the past 250 years.

Museum bosses want to demonstrate the different ways five of the objects arrived in Britain.

They have been chosen to each represent a key aspect or consequence of British colonialism that ultimately led to their acquisition.

These interactions include the activities of colonial officials and Christian missionaries, as well as the development of a new economy post-independence.

The five objects on show arrived at the British Museum over a one-hundred year period, from the early 20th century to the early 21st century. 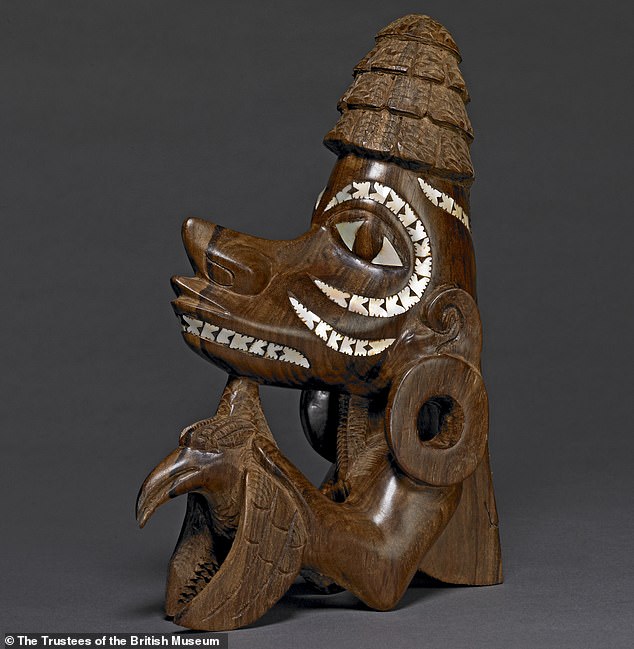 This figure-head (ngusungusu) of wood with pearl shell inlay from the Solomon Islands will also feature in the exhibition. The British Museum has museum long faced criticism over how it sourced its most prized possessions from former British colonies and beyond 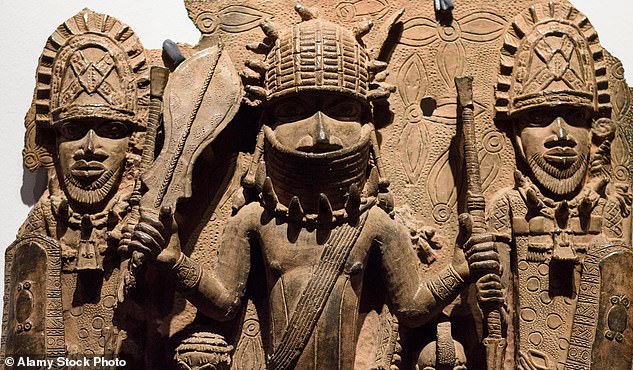 Hundreds of bronzes – including this brass plaque of the king and attendants, above,– were taken from what is now Nigeria by a British expedition in 1897. They now live in the British Museum, which has caused mass controversy

They include a figure of an ancestor taken in 1891 from a shrine by the captain of HMS Royalist during an attempt to impose colonial authority on communities in Roviana, and later sold by him to the British Museum; a 'bird net' float used to catch fish which was given to a missionary in 1903 who regarded it as a trophy in his campaign against the religion of the Islanders; and a string of shell-money presented to HRH the Duke of Gloucester in 1978 during independence celebrations.

The display is supplemented by archival and contemporary photography and has been created in consultation with Solomon Islanders who live in the UK.

Treasures such as the British Museum's Elgin Marbles – taken from the Parthenon in Athens 200 years ago – have long been claimed by Greece, but more objects have now been drawn into the row.

Last year a delegation from Chile demanded the return of a four-ton Easter Island statue held at the British Museum. Protesters have also called for the repatriation of indigenous artefacts to Australia.

Over in France, Emmanuel Macron urged that thousands of French museum exhibits be sent back to Africa – prompting Labour Shadow Minister Diane Abbott to insist that the UK should do the same. 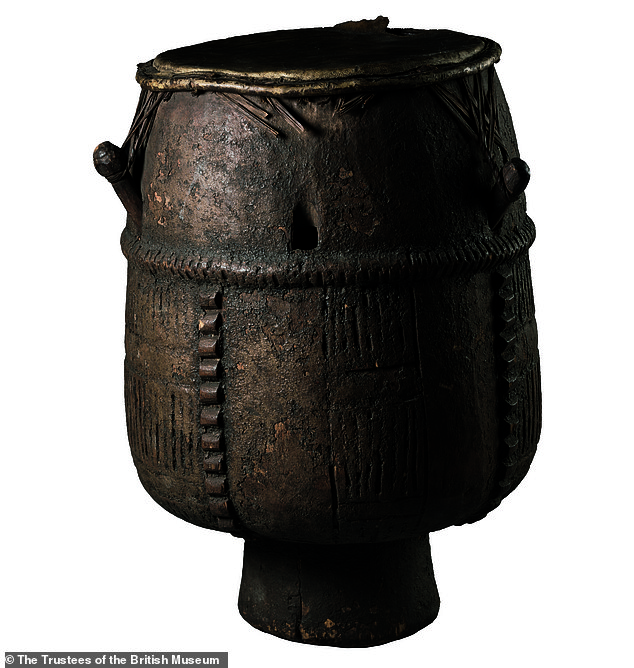 This drum, made by the Akan people, Ghana was taken to Virginia , USA, during the slave trade and came to the British Museum as part of its founding collection, bequeathed by Sir Hans Sloane 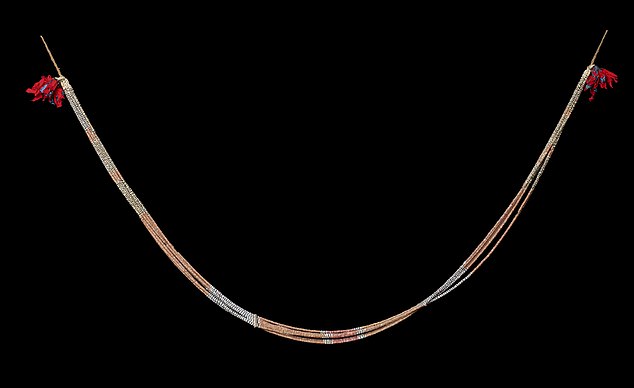 These shell-money beads, made in Malaita Island, are another of the artefacts featured in the Collecting histories exhibition

Labour leader Jeremy Corbyn told a Greek newspaper that under a Labour government the Elgin Marbles would be returned to Athens, along with other treasures to their country of origin.

So far the British museum and other UK institutions have resisted repatriation campaigns citing legislation preventing them from breaking up collections and arguing that they can preserve items and present them to an international audience.

Hartwig Fischer, Director of the British Museum, said: 'The British Museum has always actively researched its collection, and it continues to do so to better understand how we should present collecting histories for our visitors.

'The Asahi Shimbun Displays Collecting Histories: Solomon Islands allows us to test out ideas that will inform what we will do in the future.' 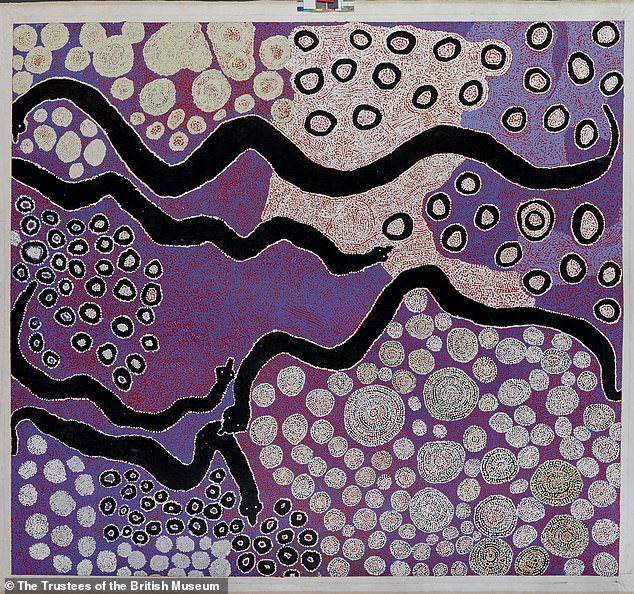 This Pukara, showing important ancestral Dreaming traditions, was painted for sale in 2013 by senior Aboriginal men of the Spinifex people of the desert region of Western Australia 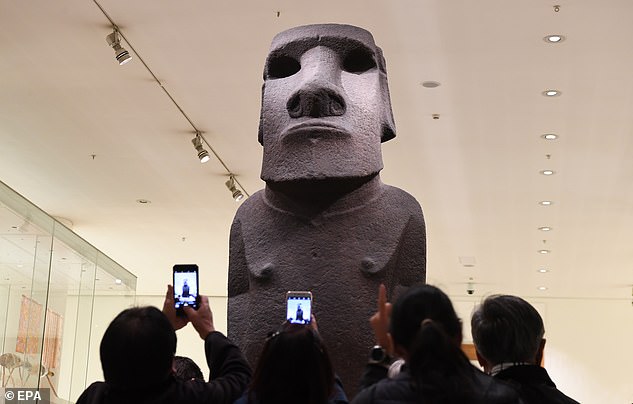 Taken from Easter Island in 1868, the 1,000-year-old Hoa Hakananai’a sacred statue was given to the British Museum by Queen Victoria. Easter Island’s governor and the government of Chile now want it back

The Solomon Islands have been inhabited for thousands of years. The first European to visit them was Spanish navigator Álvaro de Mendaña who arrived in 1568.

The islands were then claimed by Britain as the British Solomon Islands Protectorate in the 1890s.

During the 20th century, colonial government, plantation businesses and Christian missions occupied the island, before it got its independence in 1978 and joined the Commonwealth.

'Collecting Histories: Solomon Islands is an opportunity to find out more about what our visitors respond to, while also showcasing a selection of wonderful objects from a lesser-known part of the collection.' 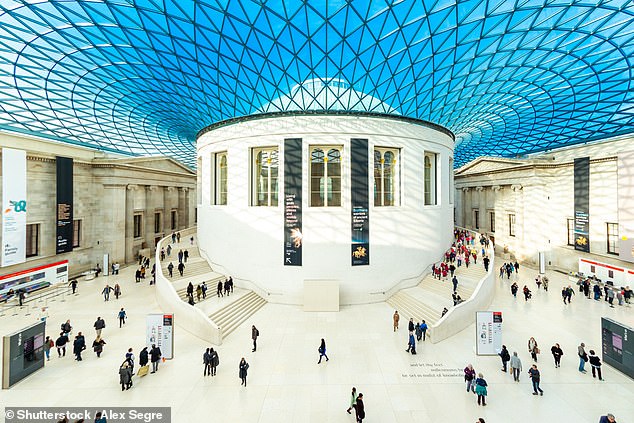 The biggest rows over the British Museum's colonial past (interior of museum pictured) involve the Elgin Marbles, taken from Athens, the Benin Bronzes from Nigeria and Rosetta Stone from Egypt

Arthur Patel, 21 months, has to visit the barber every...

Mugger punched man to ground and stole his credit card...