Boy, 12, plunged to death from escalator 'after trousers got caught

By Harry Howard For Mailonline

This is the tragic moment a 12-year-old boy falls 50ft to his death from an escalator after 'his trousers became caught in the hand rail' while he played at the top.

The boy fell at the Nucleus Mall, in Ranchi, in the eastern Indian state of Jharkhand, on June 22 at around 6.15pm.

Footage shows him playing near the top of the escalator at the shopping centre while other shoppers go up and down - but he then tips over the side and loses his grip before falling. 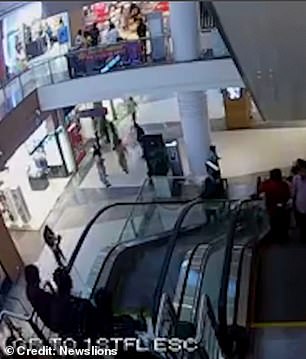 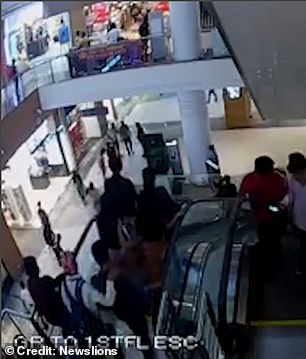 A boy (far left) plays near the top of an escalator in the Nucleus Mall, in Ranchi, in the eastern Indian state of Jharkhand before getting his trousers caught on the motorised rail and plunging 50ft to his death. Right: The boy appears to be trying to stop the rail with his hand

The video, which was filmed from CCTV inside the shopping complex, initially shows the boy standing at the top of the escalator as other shoppers walk past.

He puts his hand on the motorised rail in an apparent attempt to stop it before he is joined by two other children standing next to him.

But he suddenly pitches forward and is unable to stop himself tipping over the side, despite frantically trying to do so. 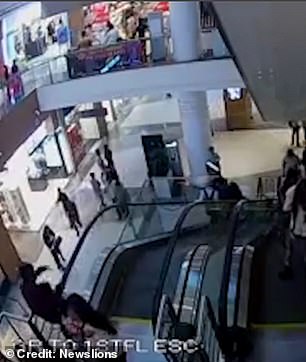 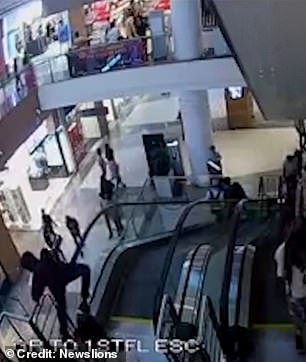 His trousers then appear to get caught on the rail and he is unable to stop himself pitching forwards. The weight of his body then fully tips him over the side and he tries to cling on

He still clings on with his right hand above the drop onto the floor below.

The boy is then briefly dragged down as the escalator descends before he loses his grip and disappears from view as he falls.

Other shoppers quickly run to peer over the edge before descending on the escalator to try to reach him. 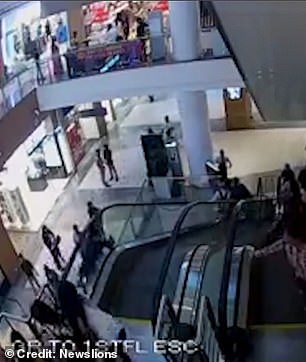 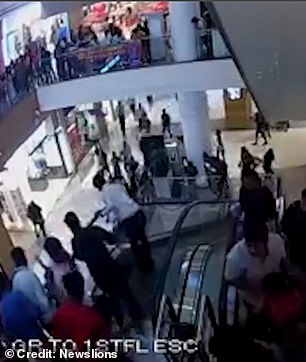 The boy tries to hold on to the rail as the escalator descends but his hand slips off it and he plunges to his death. Other shoppers frantically rush to look over the side while others run down the escalator to get to him

Some other concerned bystanders stay at the top of the escalator and are seen peering over the edge.

Vishvendu Jaipuriar, a local journalist who witnessed the incident, said: 'The boy was rubbing his body against the escalator's conveyor belt.

'He was playfully trying to stop with all his might. In the process, he got his pants stuck in the belt and was pulled along.'

According to Indian government rules, the shopping mall administration is required to install safety nets near the escalators to avoid such incidents.

'If there was a safety net, the boy would have been alive,' said Mr Jaipuriar.