Boris Johnson will 'scrap plans for vaccine passports at nightclubs, cinemas and sports grounds' as he sets out his winter Covid plan on Tuesday

Boris Johnson is set to announce the Government's winter Covid plan next week and will reportedly scrap plans to make vaccine passports compulsory at venues under the proposals.

The Prime Minister is hosting a press conference on Tuesday where he will reportedly say he is scrapping plans to make vaccine passports an entry requirement at nightclubs, cinemas and sports grounds.

Mr Johnson, 57, is reportedly planning to abandon the proposed compulsory certification scheme, which would have seen all venues forced to check people's vaccination status, The Times reported.

Scientists advised the Prime Minister that vaccinations will be an effective first line of defence against a Covid spike, and the Government's winter plan is expected to focus on vaccines rather than lockdowns. 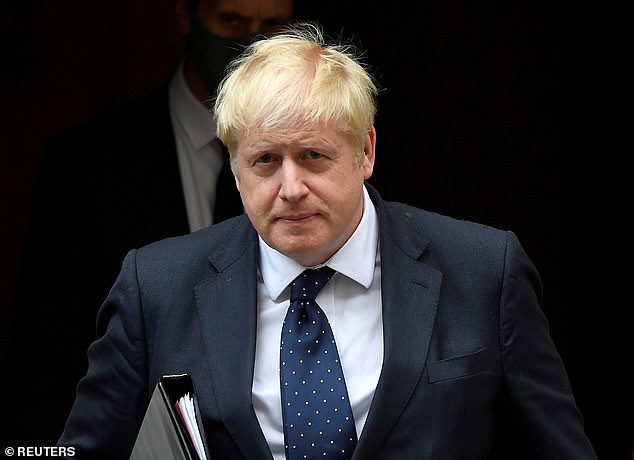 The Prime Minister (pictured), 57, is set to announce the Government's winter Covid plan, with a focus being placed on vaccination as he remains reluctant to impose further lockdowns

The reported U-turn also comes after a backlash from Tory backbench MPs, who had criticised the proposals and said it would create a group of second-class citizens.

Firms and venues who are already demanding proof of vaccination will be allowed to continue to do so, but the Covid winter plan is not expected to put emphasis on these measures.

Mr Johnson is expected to say vaccines will be the first line of defence this autumn and winter, while a decision is expected on how to roll out a booster jab programme.

There has been speculation around what increased measures may be brought in across winter, which is a high-risk time for coronavirus as other respiratory illnesses will circulate.

Mr Johnson still hopes to avoid locking down the entire country, and instead plans to repeal the some of the Government's powers to shut down sections of the economy in England.

Mr Johnson said: 'Thanks to the efforts of the public, the NHS and our phenomenal vaccination programme, we reached Step 4 in our road map and life has returned to a sense of normality.

'These extraordinary times required necessary but intrusive measures. But I'm determined to get rid of any powers we no longer need because of our vaccine defences.

'I will set out the next phase in our Covid response shortly.' 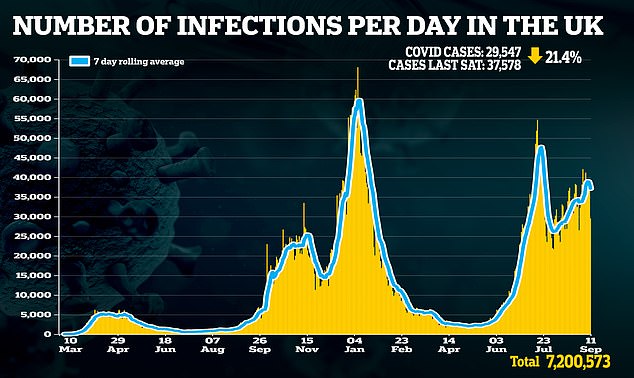 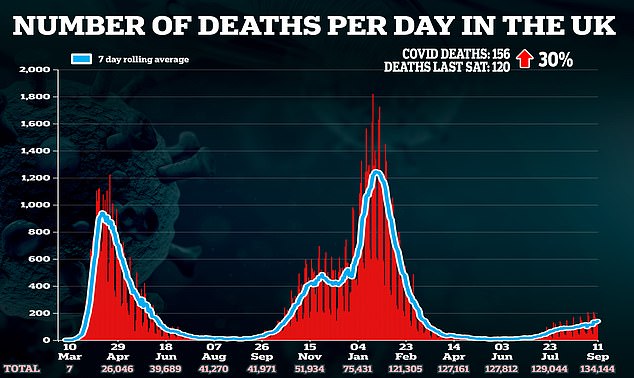 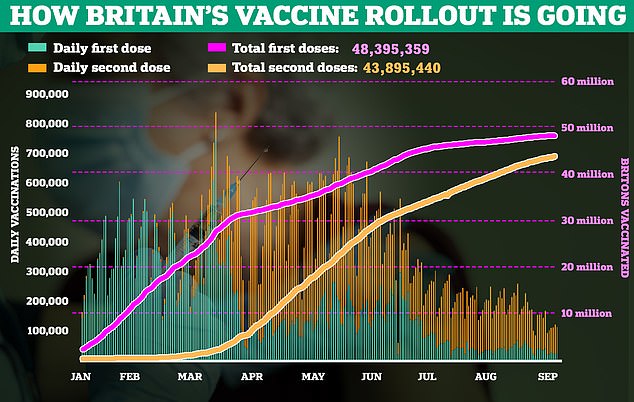 Britain's vaccine drive is continuing to roll forward, taking the total amount of adults fully protected against the virus to just under 43.9million (80.8 per cent)

The powers expected to be repealed under the Coronavirus Act include those allowing the closing down of the economy, the imposing of restrictions on events and gatherings, the power to temporarily close or restrict access to schools, and powers to detain infectious people.

The Government also expects the independent Joint Committee on Vaccinations and Immunisation (JCVI) to recommend details of a jab booster programme next week.

There are plans in place to begin giving booster jabs to the most vulnerable as early as this month, as more than 65 per cent of the entire UK population have been fully vaccinated.

The UK's chief medical officers are drawing up advice to Government on whether children aged 12 to 15 should be vaccinated after the JCVI said the margin of benefit from vaccinating healthy children was too small to say they should receive a jab.

The Observer reported that jabs for 12 to 15-year-olds would begin on September 22.

But the UK's medical regulator has ruled that the Oxford-AstraZeneca vaccine cannot be used for third doses in this way.

This means the majority of third doses given out this autumn and winter are likely to be Pfizer.

This could see the Oxford jab, initially planned to be the workhorse of the UK's vaccination programme, effectively phased out.

The AZ jab is already not offered to under 40s in the UK due to a link with rare blood clots.

On Friday, Professor Sir Andrew Pollard, whose team developed the Oxford/AstraZeneca vaccine, said he believes the priority should be donating vaccines to countries where people are still awaiting a first dose.

His views have been echoed by his Oxford colleague Professor Dame Sarah Gilbert, who helped design the vaccine, and who said booster jabs may not be needed by everyone. 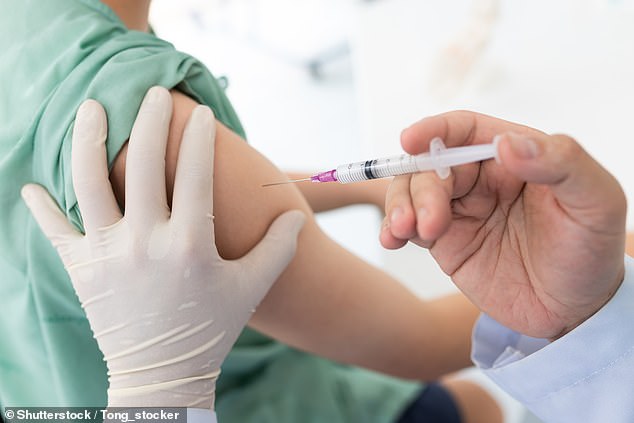 Mr Johnson is expected to say vaccines will be the first line of defence this autumn and winter, while a decision is expected on how to roll out a booster jab programme (stock image)

The Medicines and Healthcare products Regulatory Agency (MHRA) said on Thursday that the Pfizer and AstraZeneca jabs are safe to use as boosters, but the JCVI has yet to give its advice to ministers.

The JCVI has already said a third dose should be offered to people with severely weakened immune systems.

Several other countries, including the US, Israel, Hungary, Germany and France, have announced or have started third dose programmes for at least some of their citizens.

Meanwhile, it was reported that hundreds of thousands of long Covid patients were waiting up to six months to access clinics specifically set up to tackle the condition.

Department of Health bosses posted 29,547 new cases on Saturday, down 21 per cent on the 37,578 recorded last Saturday.

But the number of people dying within 28 days of a positive test is continuing to increase, with 156 people falling victim to the virus, bringing the total figure past 158,000. The figure was up 30 per cent on the 120 recorded last week.

Fatalities tend to reflect changes in infection levels at least a week after due to the time it takes for people to become seriously ill.

Britain's vaccine drive is continuing to roll forward with 89,832 second doses dished out today. It takes the total amount of adults fully protected against the virus to just under 43.9million (80.8 per cent).

Some 25,019 first doses were also dished out, taking the total number of people to receive at least one jab up to 48.4million (89 per cent)

Elsewhere, it was reported that PCR tests needed prior to travel will be scrapped, with the day two test required when returning from abroad to be replaced by a cheaper lateral flow test.

Officials are working towards scrapping the requirement for green and amber list countries before the half-term holidays next month, The Mail on Sunday revealed. 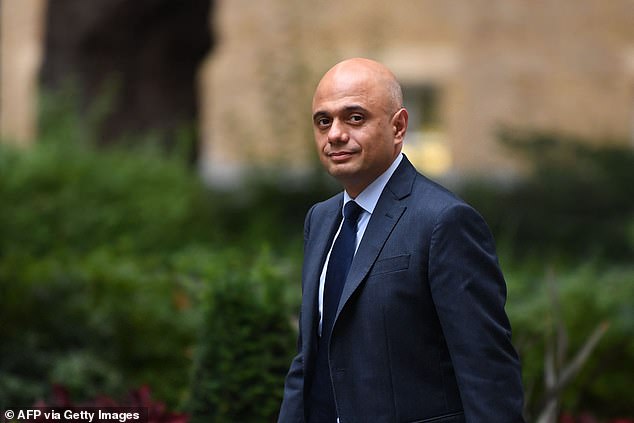 Ministers were reportedly considering a so-called firebreak lockdown in October. But Health Secretary Sajid Javid (pictured) said he did not think it was 'something we need to consider'

The move will slash the cost of family holidays by hundreds of pounds. Currently, the PCR test can cost more than £100, while the NHS offers free lateral flow tests.

The change would also tackle fears that some PCR firms are profiteering and could provide an incentive for people to be vaccinated, as the new rules would only apply to those who have been double jabbed.

The focus on vaccination in the Covid winter plan comes after reports that ministers were considering a so-called firebreak lockdown in October.

An unnamed member of the Scientific Advisory Group for Emergencies (Sage) said a 'precautionary break' could be part of 'contingency plans', the i newspaper reported.

But Health Secretary Sajid Javid said: 'I don't think that's something we need to consider.'

He said no decisions are 'risk-free' but insisted the 'best defence' against another wave of the virus is the vaccine programme.

A No 10 spokesman previously said it is not true that the Government is planning a lockdown or firebreak around the October half-term.

But the spokesman added that they have 'retained contingency plans as part of responsible planning for a range of scenarios'.

They said: 'These kind of measures would only be reintroduced as a last resort to prevent unsustainable pressure on our NHS.'

England win 3-0 after Cameroon players 'cry in tunnel at...

Kate and William rush back to their children at Buckingham... 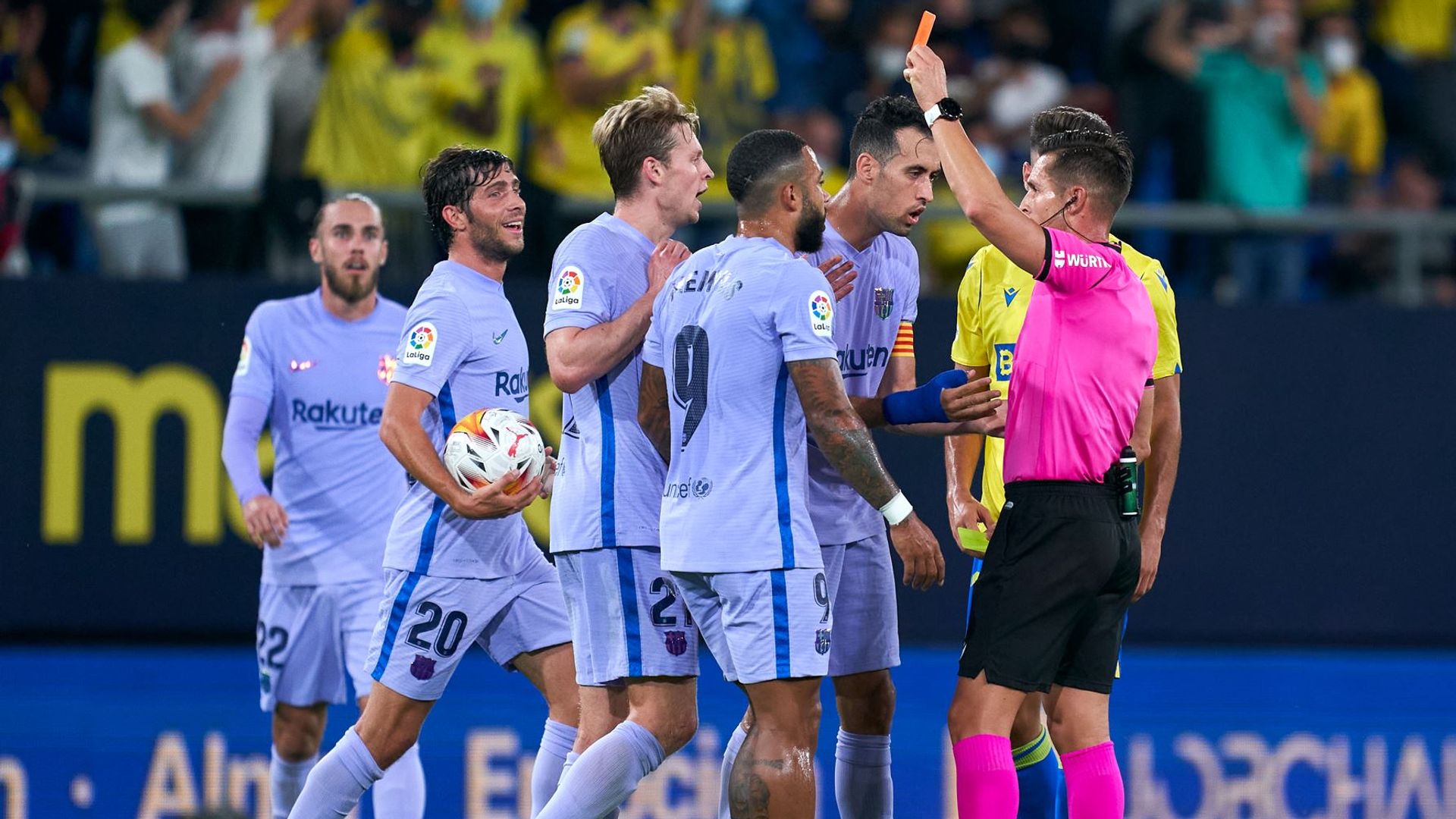