So much for his sharper image! B

So much for his sharper image! Boris Johnson is caught wearing his socks inside out during grilling at Tory hustings

Boris Johnson appeared as if he may have left the house in a hurry this morning, sporting one inside-out sock as he spoke at hustings in Birmingham.

Poking out from his brogues the patterned sock marked the return of the famously unkempt Mr Johnson - a day after neighbour's reports of an explosive row saw police called to the South London flat he shares with his girlfriend.

Speculation over a new sharper image for Mr Johnson emerged after he began living with girlfriend and ex-conservative communications manager Carrie Symonds. 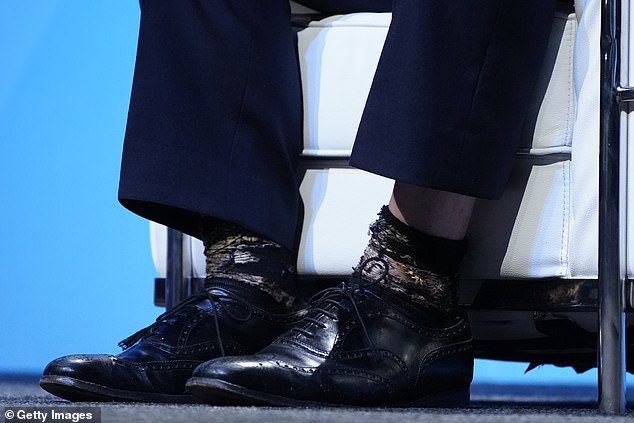 The glamorous PR executive who friends describe as brilliant and ambitious, is credited with having transforming Mr Johnson's public image over the past months.

Under her direction, his famous blond mane has been cropped, he has lost weight and his trademark dishevelled appearance has been replaced by a sharp-suited image in the run up to the Tory leadership race.

But today as Miss Symonds was absent from the Hustings in Birmingham, Mr Johnson's considered image seemed to hit a bump in the road.

With one paisley patterned sock inside out Boris avoided questions about the row at his girlfriend's house on Friday morning. 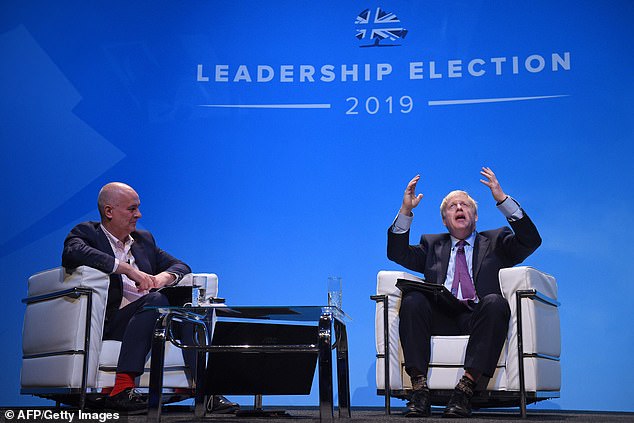 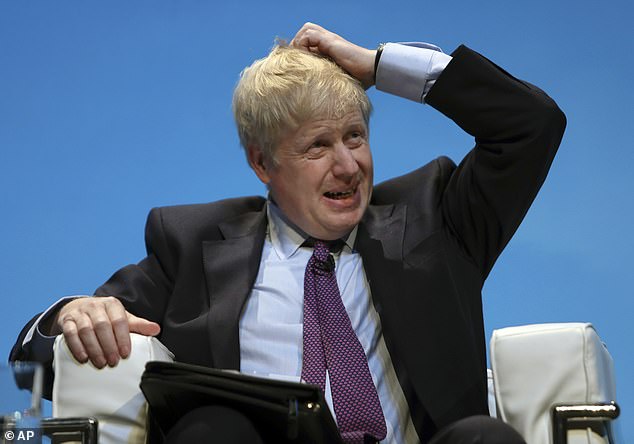 Speaking at a hustings in Birmingham today, Boris Johnson did not mention the issue in his opening comments, insisting: 'We need to get Brexit done... and I am the right man.'

Broadcaster Iain Dale, hosting the event, said to Mr Johnson: 'They  [the public] want to know why the police were called to your house in the early hours of Friday morning. If the police are called to your home it is important. A lot of people in politics do call into question your character.'

Mr Johnson replied: 'I don't think people want to hear about that kind of thing', and refused to answer the question five times in total.

Meanwhile Jeremy Hunt did not make any comment on the incident when he was quizzed at the hustings and played it safe with plain black socks as he gave his pitch. 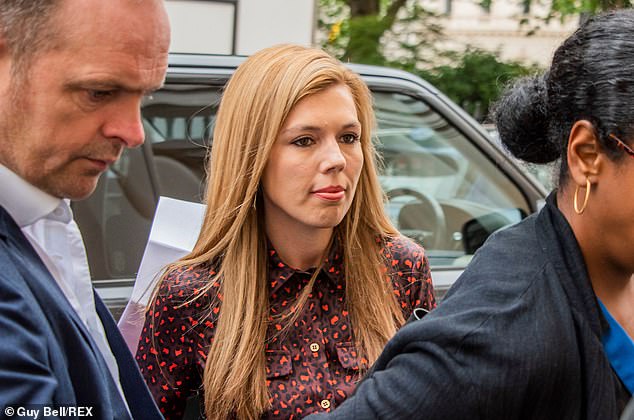 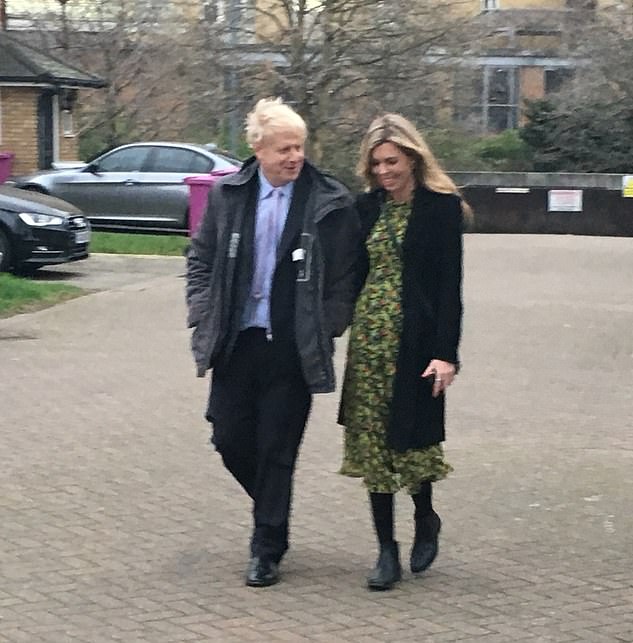 The couple pictured together in London on January 18, for the first time after Mr Johnson's second marriage ended following rumours of a relationship with Miss Symonds

Carrie comes from a successful background as her father Matthew Symonds was co-founder of The Independent newspaper and her mother Josephine Mcaffee a successful media lawyer.

The couple currently divide their time between her London flat and home in Oxfordshire, but friends expect Carrie to move into No 10 should Boris win the leadership race.

'Despite the age gap it is a proper love match,' said one. 'When they met it was very much a meeting of minds. Carrie is incredibly quick and funny.

'He found her brilliant. She is passionately pro-animal welfare and pro-environment, and Boris really loves that about her.'

Sources say Carrie's ability to effortlessly combine the intense focus required to win a fiercely fought leadership campaign with a playful sense of fun has rubbed off on Boris, bringing a competency that his political operation once lacked.

Earlier this month she attended his leadership launch, prompting speculation she hopes to move into Number 10 if he succeeds in his bid for power.

He is also said to be hoping to marry Miss Symonds once his divorce to Marina Wheeler, with whom he has four children, has been finalised. The break-up is said to have severely strained relations between Mr Johnson and his children. 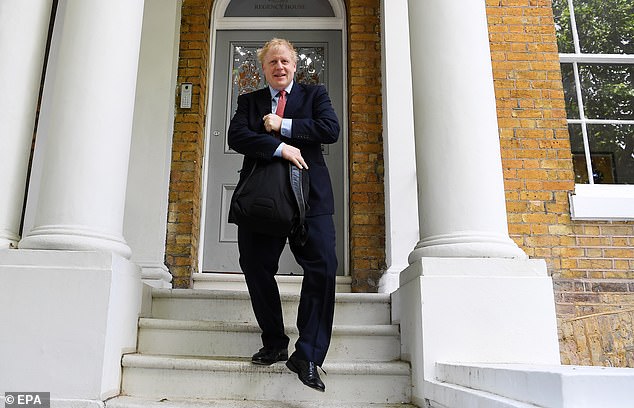 Boris Johnson is pictured leaving the flat he shares with Carrie Symonds in Camberwell on Friday morning. Neighbours called police to the south London flat after hearing a loud altercation between Mr Johnson and his 31-year-old lover 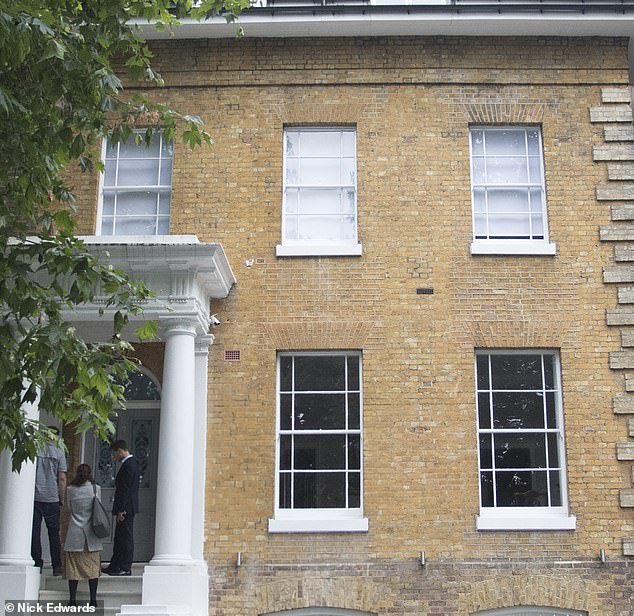 Miss Symonds is said to have been heard screaming at Mr Johnson to get out of the flat in a Victorian House in Camberwell, south London that she bought last year and lives in with her lover (pictured)

Could Boris Johnson's personal life be a liability to his chances of becoming PM?

Mr Johnson's team refused to comment tonight, and will be hoping the episode can be dismissed as a personal tiff.

But it plays into concerns among MPs that Mr Johnson's volatile personal life could be a liability, and could be raised in a frantic slew of hustings events the candidates are about to embark on.

If he succeeds Theresa May, Mr Johnson is likely to earn the dubious record of being the first PM in modern times to divorce while in Downing Street.

During the campaign Mr Johnson has faced pressure to state how many children he has.

Both the BBC's Emma Barnett and ITV's Piers Morgan have grilled his supporters on why Mr Johnson was seemingly unwilling to face questions about his public and private life - including about the number of offspring.

Mr Johnson has four children with his wife Marina Wheeler who he separated from last year with the pair now in the process of getting divorced.

In 2013 it emerged that Mr Johnson had fathered a child in an extramarital affair with Helen Macintyre, a professional art consultant, and the Court of Appeal ruled that the public did have the right to know about it after a privacy battle to keep the birth a secret.

The daughter was alleged during court proceedings to be the second child fathered by Mr Johnson as a result of an affair, according to The Guardian.

Mr Johnson previously hit the headlines in the 2000s over an affair with socialite Petronella Wyatt. She allegedly had an abortion as a result of the relationship.

Mr Hunt has been stressing his own apparently idyllic family life during his campaign up to now, as well as suggesting Mr Johnson cannot be 'trusted' by the EU.

Retired Ohio cop, 78, died in the Dominican Republic after surgery

Baby was born with fluid-filled cysts blocking her airways

Development of SLS rocket has overrun costs by nearly $2...