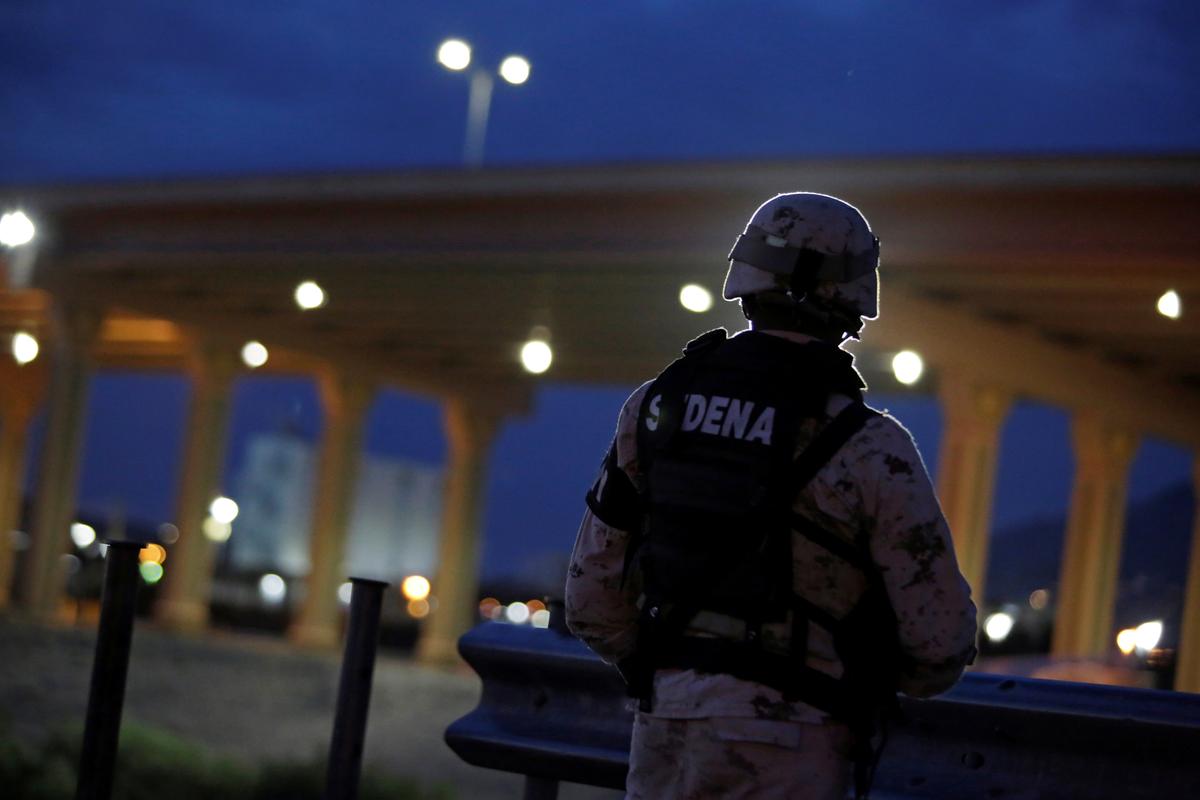 MEXICO CITY (Reuters) - The chief diplomats of Mexico and the United States plan to meet on Sunday for talks about a new U.S. rule restricting asylum applications from Central American migrants that would burden Mexico’s already-overwhelmed refugee agency.

A member of the Mexican National Guard keeps watch near the border between Mexico and U.S., as seen from Ciudad Juarez, Mexico July 14, 2019. REUTERS/Daniel Becerril

Mexican Foreign Minister Marcelo Ebrard will meet with U.S. Secretary of State Mike Pompeo in Mexico City to discuss migration, trade and a development plan for Central America, Ebrard said on Twitter. Pompeo is stopping in Mexico as part of a larger tour of Latin America.

A surge of Central American migrants passing through Mexico to seek asylum in the United States has led to both friction and cooperation between the United States and Mexico, which share a 2,000-mile (3,000-km) border and are leading trade partners of each other.

U.S. officials say asylum seekers, mostly from Guatemala, Honduras and El Salvador, have inundated the U.S. side of the border after traveling north through Mexico. The three countries suffer from gang violence, political turmoil and domestic abuse.

President Donald Trump’s administration has responded by restricting the ability of migrants to seek asylum and cutting hundreds of millions of dollars in aid to the three impoverished countries, punishing them for the northward migration.

Under U.S. pressure, Mexico has agreed to accept asylum-seekers while the United States government processes their applications.

On Monday, the United States went a step further, blindsiding Mexico by unveiling a new rule to bar almost all immigrants from applying for asylum at the southern border, requiring them to first pursue safe haven in a third country, such as Mexico, through which they traveled to reach the United States.

Several immigrant advocacy groups branded the new rule as illegal, and the American Civil Liberties Union promised a lawsuit to stop it.

Trump presented a bill to his Cabinet on Tuesday aimed at boosting border security and overhauling the current immigration system to make it more merit-based.

The Ebrard-Pompeo talks are scheduled a day before the end of a 45-day period in which the Mexican government committed to significantly lowering the number of people trying to cross the U.S. border illegally, part of a deal struck in early June to avert tariffs threatened by Trump.

Ebrard pushed back against the new U.S. measure on Monday, saying asylum-seekers rejected by the United States should have to go back to their home countries, not Mexico.

The Mexican government was surprised by the new U.S. measure, according to the head of the tiny Mexican agency that would have to process all asylum applicants in Mexico.

Andres Ramirez, the head of Mexican Commission for Refugee Assistance (COMAR), said the U.S. decision was unilateral and he was not consulted.

“There’s an problem internal to the United States itself, because we know this goes against U.S. laws,” Ramirez said. “This reverses everything that was planted in terms of the law of asylum in the United States.”

COMAR data shows the numbers rising each month this year, with 6,825 applicants in June alone, compared with 1,195 in January and 2,025 for June of last year.

“The situation will be more serious still,” Ramirez said, raising alarm that, without any plan to reintegrate deportees, Central Americans sent back home will simply try again.

“This has been seen historically. This isn’t speculative,” Ramirez said. “We’ve seen it when deportations aren’t accompanied by any process of reintegration.”

In setback for 5-Star, Italy's PM backs completion of rail...

Robert W Gore, who invented Gore-Tex technology while working for his father's company...

In the depths of horror, I saw the light: Katie Piper wasn't religious until an...

Greece to overturn law that made universities no-go zone...

Pictures reveal what PM and cabinet would look like as...

Meet Beatrice Johnson and Pete Patel! Hilarious pictures reveal what the PM and...

Almost 20% of workers still on furlough amid mass unemployment...

Almost 20 per cent of UK workers are still on furlough and just seven per cent left...

Drivers over 70 will have their eyes tested every three...

Drivers over 70 will have their

Pedestrian is killed by van fleeing fight where two men...

Innocent pedestrian is killed after being hit by a van fleeing the scene of a street...