Shooting parties on Yorkshire Dales as grouse season gets underway

The not so Glorious 12th: Shooting parties take to the Yorkshire Dales as this years grouse season gets underway after fall in bird numbers amid surge in tick and beetle infestations on some estatesTh

The not so Glorious 12th: Shooting parties take to the Yorkshire Dales as this years grouse season gets underway after fall in bird numbers amid surge in tick and beetle infestations on some estates

By Amie Gordon For Mailonline

Shooting parties are out in force across Britain's moorlands today as the Glorious Twelfth grouse season gets underway.

Enthusiasts have made their way to the Yorkshire Dales and Scottish moorlands, undeterred by coronavirus measures including temperature checks, PPE, social distancing, food hygiene and travel restrictions.

Estates have put measures in place to enable the grouse shooting season to go ahead safely in the face of the pandemic, the industry has said.

But this year's season has also been affected by damaged heather from heather beetles, which has left adult grouse in a poor condition to breed, and drought that limited the insects which grouse chicks feed on.

Pests with ticks carry diseases that can kill grouse have also led to a dwindling number of birds on estates.

And lockdown has meant far fewer wealthy Americans or Europeans coming to the moors to shoot, spending thousands of pounds for the privilege. 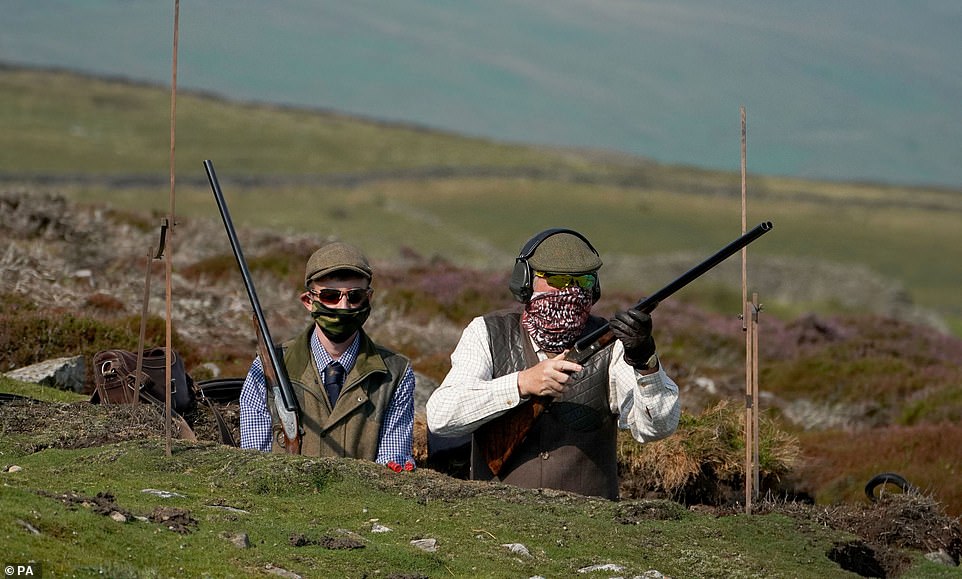 Members of a shooting party on a moor near Grinton, North Yorkshire, as the Glorious 12th, the official start of the grouse shooting season, gets underway 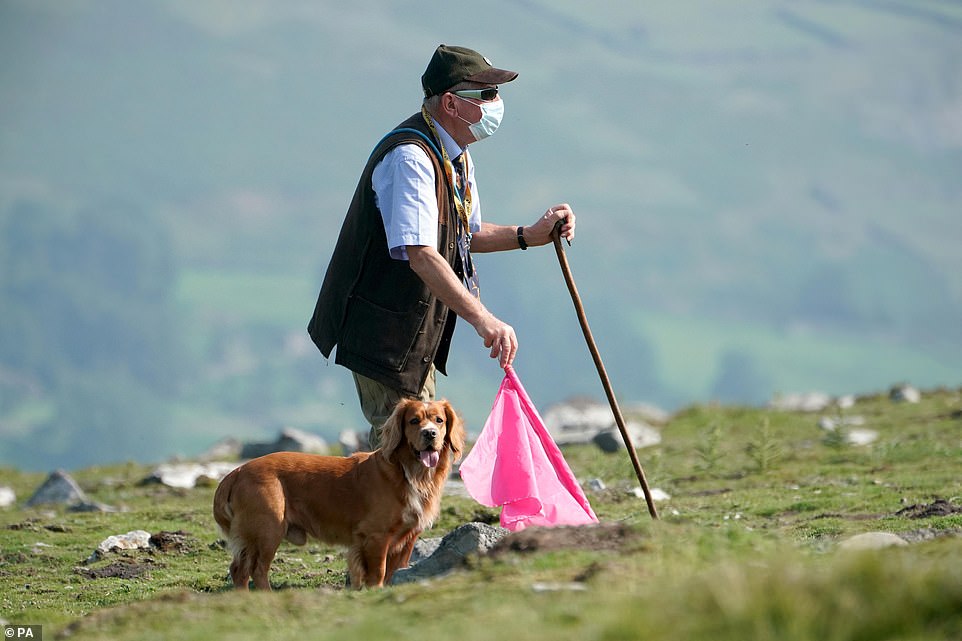 Retired game keeper Vincent Lynch, 72, beating grouse with his dog during a shooting party the moor near Grinton 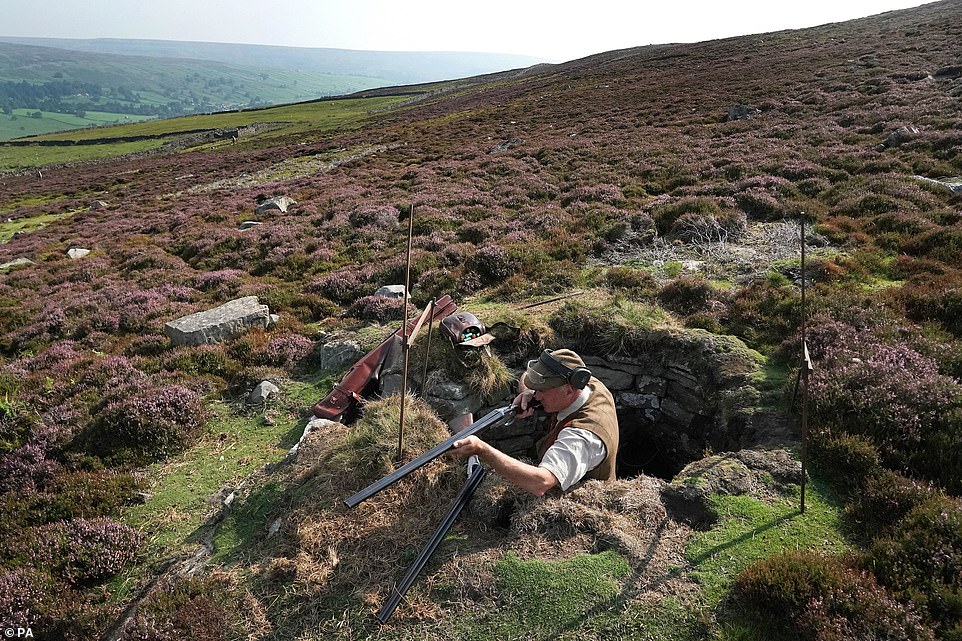 Grouse numbers have been affected by heather beetle, an insect which destroys the heather that young grouse need to grow 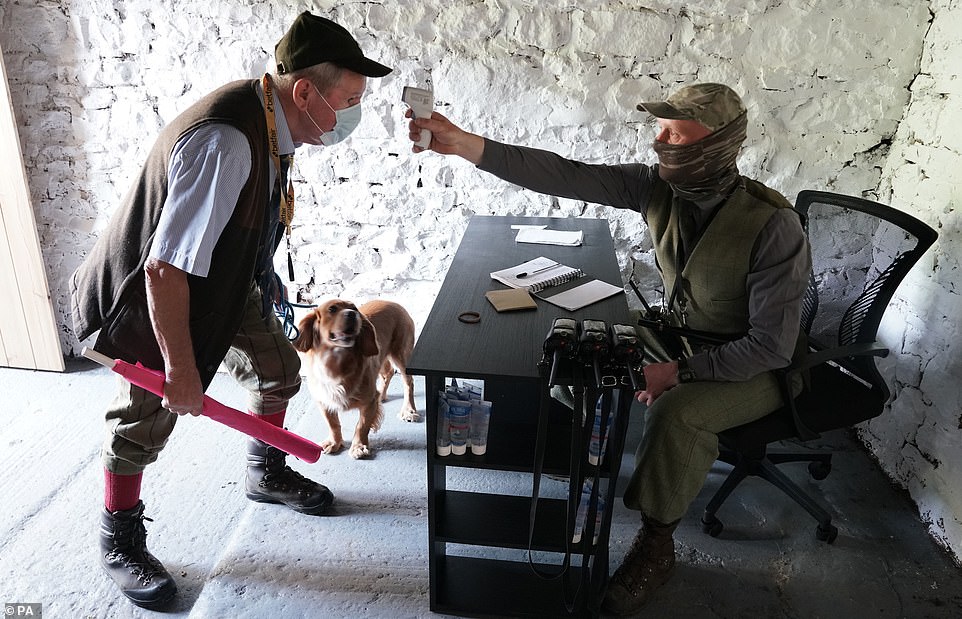 Dee Ward, the owner of Rottal Estate in Angus, told The Times that the number of birds shot on his estate would fall by about half this year.

The Moorland Association, which represents moorland owners and managers in England and Wales, said plans had been put in place to ensure shooting can resume safely and within Government Covid-19 guidelines.

Moorland Association director Amanda Anderson said the start of the season would be an opportunity to reverse some of the damage to local rural economies caused by the pandemic.

'Although there will be Covid regulations in place on all shooting and accommodation arrangements, we're confident that once it becomes clear that shooting can restart safely, we'll soon be welcoming great numbers of shooting enthusiasts back into our communities to stay in our hotels, buy goods in our shops and eat delicious game in our restaurants,' she said.

In Scotland rural businesses have also brought in a framework of Covid-19 guidance to allow the grouse shooting season to get under way.

The sector is expecting fewer people to come from abroad for grouse shooting because of the pandemic, but it is hoped that more people from within the UK will come to take part to help provide the economic boost it can deliver.

The first drive of the season saw one group bag 10 brace of the wild birds and the opening outing delighted locals who were brought in to act as beaters - driving the grouse towards the guns, high on the moors.

Meeting up at a local farm before the shoot, retired assistant gamekeeper Vincent Lynch and his spaniel, Bolton, met old friends in the yard.

The 72-year-old beater - or more precisely the flanker - wore a mask for his day on the moor and had his temperature checked before starting out.

He said: 'It's an integral part of life in the Dales. We needed this, it is the life-blood to the economy. It's bloody brilliant, a marvellous day like today, you can't ask for anything nicer.'

The Glorious Twelfth: Enthusiasts out in force as traditional red grouse shooting season gets underway across Britain's heather upland moors 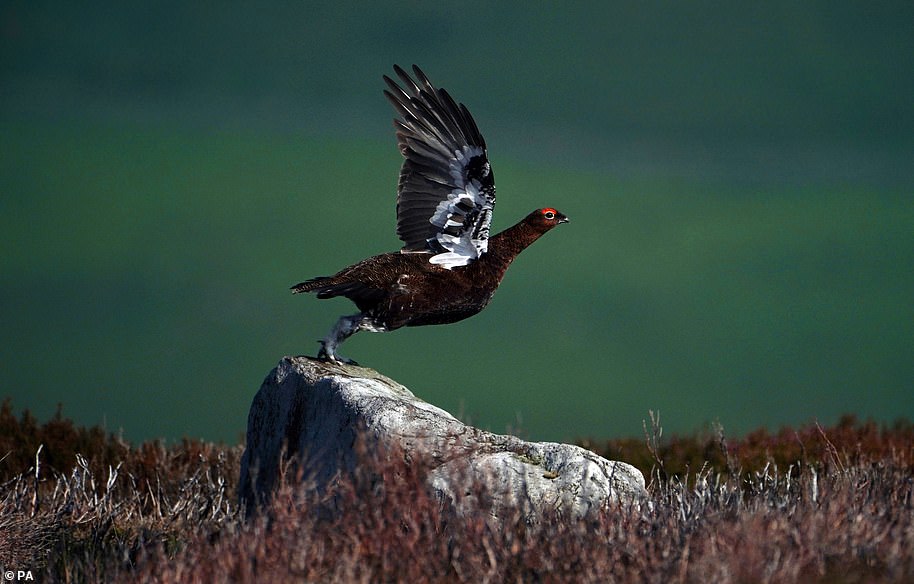 The Red Grouse, unique to the British Isles, has been described as the finest gamebird in the world

It is August 12, the traditional start of the red grouse shooting season, which takes place in Britain's heather upland moors.

Even just a few weeks ago, it was not clear if the grouse shooting season would go ahead.

Countryside organisations have put in place measures to make it safe, including the use of personal protection equipment, social distancing, food hygiene measures and travel restrictions.

Some would-be participants are not travelling from abroad but shoot managers hope that the shortfall will be made up by people from within the UK taking part.

- What are the benefits of grouse shooting?

The Moorland Association, which represents heather moorland managers in England and Wales, says shooting generates £2 billion a year for the economy, with nearly £70 million direct benefits to rural communities.

It also says land management on heather moorlands where the grouse live helps other rare wildlife such as golden plover, lapwing and curlew.

The grouse season in Scotland, which runs for 16 weeks from August 12 to December 10, is estimated to be worth £32 million during a good season.

This is part of the £350 million overall value of game and country sports to Scotland.

Sporting shooting also supports 11,000 full-time jobs in Scotland, of which 2,640 are in the grouse sector.

- But isn't it controversial?

Yes, conservationists have raised concerns about the illegal killing of birds of prey on moorlands managed for grouse.

Birds of prey can come into conflict with landowners and gamekeepers - with hen harriers particularly vulnerable because they prey on the chicks of red grouse that are quarry for shoots on upland estates.

There are also concerns about burning heather to stimulate new growth that grouse like to feed on, in moorland which sits on peat - much of it historically drained for sheep grazing.

The Moorland Association says managing moorland with burning is important to prevent wildfires and support wildlife, but the RSPB says burning releases carbon emissions and blanket bog should be restored to hold water and prevent flooding downhill.

Various approaches have been suggested, and tried, including diversionary feeding of hen harriers with other food to prevent them preying on grouse chicks.

More controversial is 'brood management' in which harrier chicks are removed from their nest to prevent predation of grouse and released back into the area once they can fend for themselves.

Earlier this year, groups representing the shooting industry, gamekeepers and landowners pledged 'zero tolerance' on the illegal killing of birds of prey.

But conservation groups, including the RSPB, want to see licensing of grouse shoots, while some, such as TV naturalist Chris Packham, have called for an outright ban. 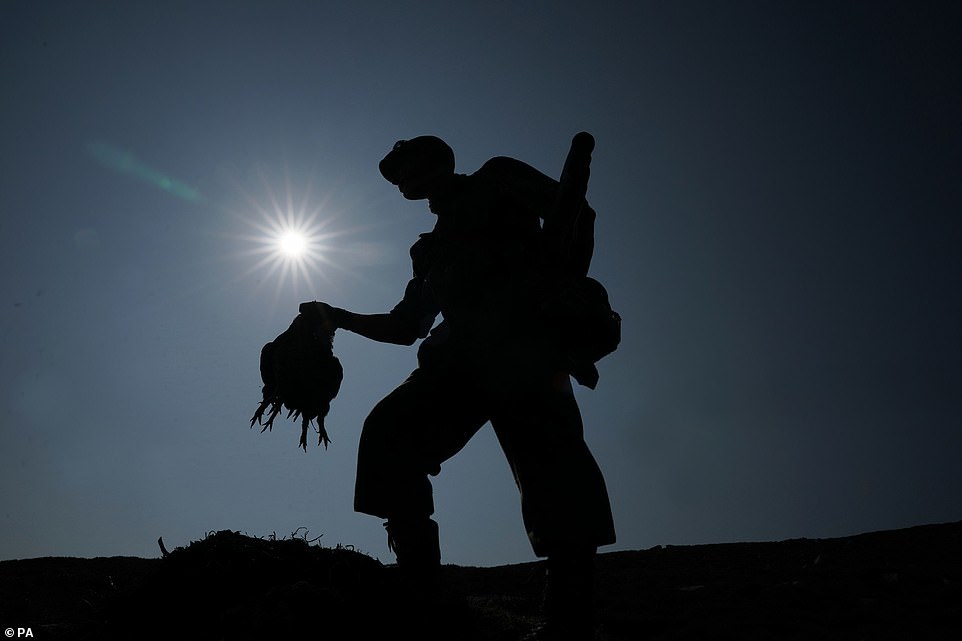 The Glorious Twelfth marks the opening day of the red grouse shooting season, which can be found in the heather uplands of England and Scotland 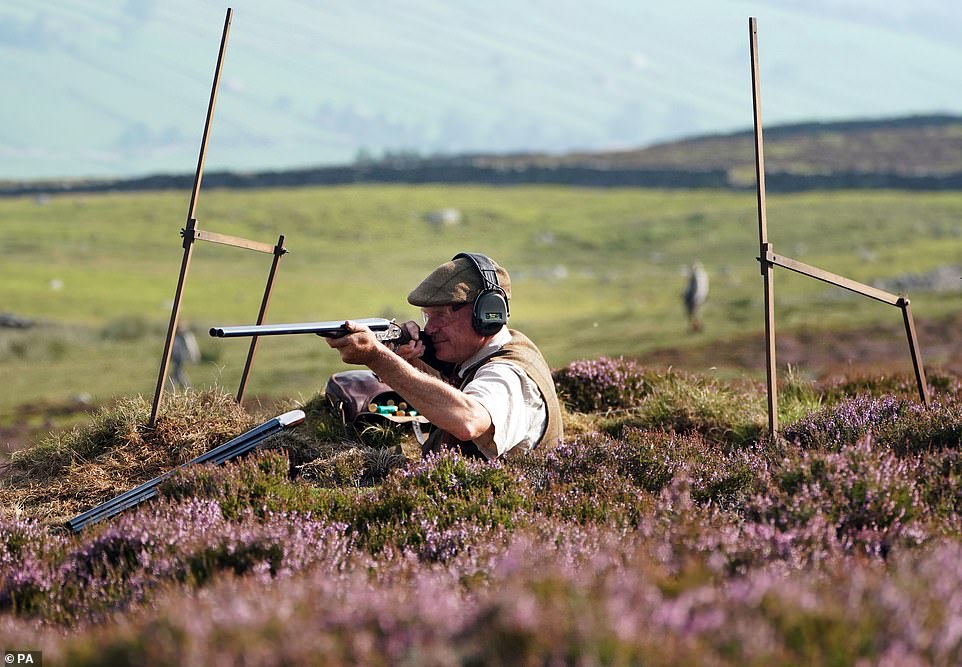 The grouse shooting industry is worth an estimated £67 million, and creates hundreds of jobs, aiding the British economy. Pictured, hunting parties in north Yorkshire this afternoon

D'Arcy Wyvill, who owns a country estate and runs a shooting business, said: 'August 12 is the start of the UK shooting season.

'People come out on the grouse moors of North Yorkshire and the Pennines and it is a huge driver for the local economy.'

He estimated that his business normally employs 15 people but triples that number during the shooting season.

'That's a lot of mouths to feed, and a lot of people rely on these estates.' 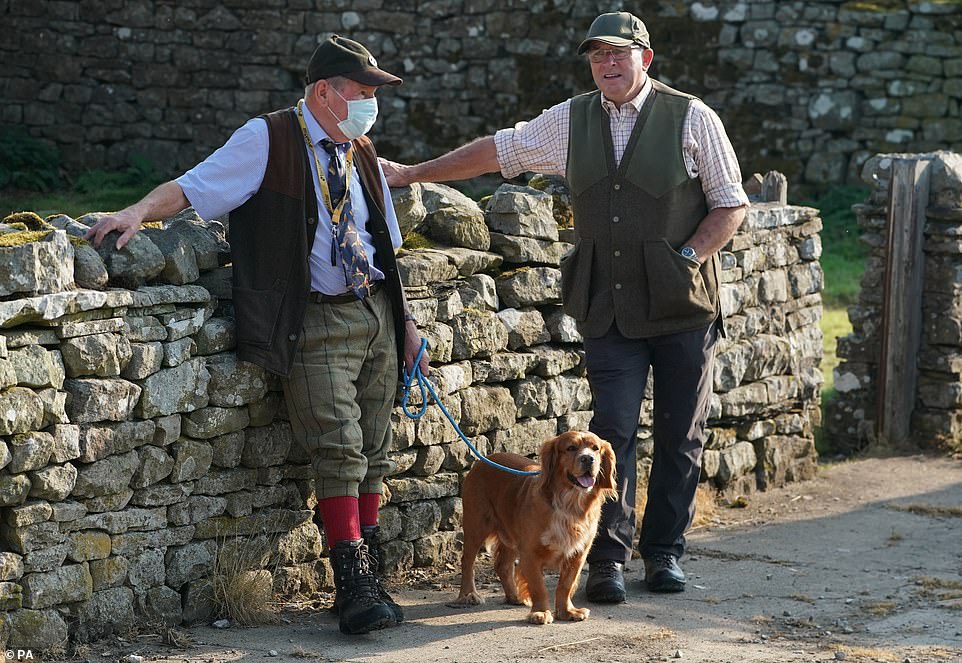 Grouse are truly wild which is why the number of days that can take place on each moor varies each year. Pictured, Vincent Lynch (left) waits for the event to get underway 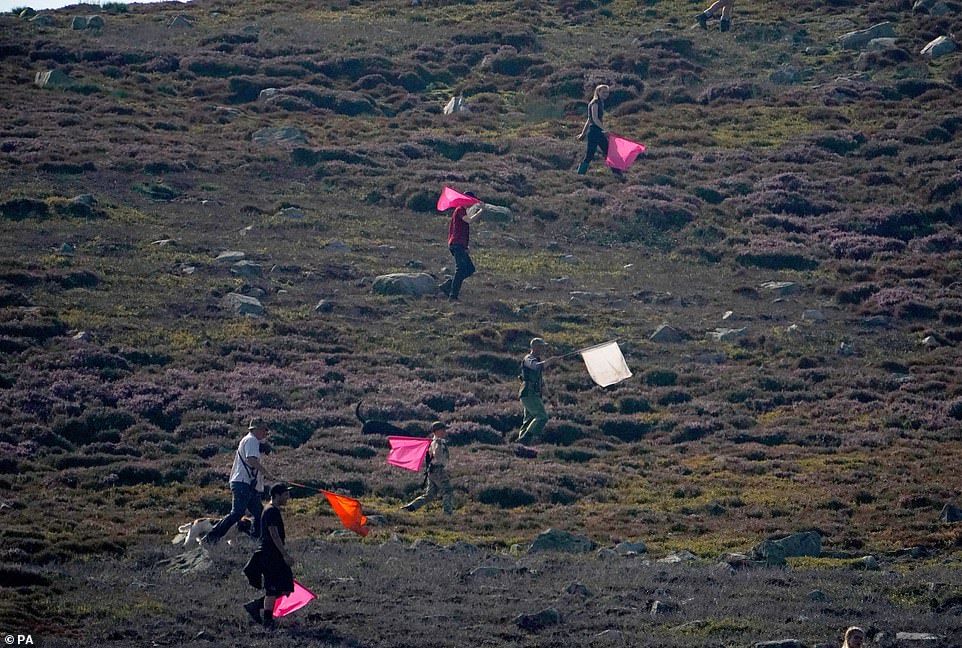 The opening outing of the season delighted locals who were brought in to act as beaters - driving the grouse towards the guns, high on the moors

Grouse numbers have also been affected by heather beetle, an insect which destroys the heather that young grouse need to grow.

Weighing up the mounting issues against the shooting industry, Mr Wyvill said: 'All in all, it is really nice to be out here in the Yorkshire Dales.

'It's a very special day to be out and I am absolutely thrilled.'

Gundog trainer Rebecca Avison was on the moor with nine of her dogs, picking up grouse.

In the yard before the shoot, she said: 'We need this. I say to people on a regular basis, these chaps who come up and have a day's shooting are giving us a job. Without the shooting community, I wouldn't have a job through winter.'

But conservationists have raised concerns about levels of illegal persecution of birds of prey on moorland managed for grouse shooting, and reiterated calls for a mandatory scheme for licensing the sector.

At the heart of the debate are hen harriers, England's most threatened bird of prey, as their food source of red grouse chicks to feed their young brings them into conflict with commercial shooting estates.

There are also concerns about burning upland peat, which stimulates new heather growth for the grouse that feed off it and which moorland managers say is necessary to reduce wildfire risks.

'We need a new approach to protect and restore birds of prey on northern England's iconic heather hills,' he said.

'That is why we're calling on the Government to urgently introduce grouse moor licensing to end the wave of wildlife crime.'

Other conservationists, including TV naturalist Chris Packham, have called for an outright ban on grouse shooting.

Climate change expert dies after 'falling into a crevasse' of glacier

The wonderful but very wacky world of Elle Macpherson

Error on quarantine form allows travellers to UK to declare they come from countries...

Head teacher tells pupils to 'get used to being cold'

Head teacher tells pupils to 'get used to being cold' as windows are kept open to...

The 14 Tory ministers who have taken Russian-linked money

The 14 Tory ministers and two intelligence committee MPs who have taken Russian-linked...

'Dangerous' sexual predator, 30, dressed up as a woman in long silver wig and black...

Chris Whitty warns Gov has pushed lockdown easing 'to its...

Teenage girl hailed a hero for killing two Taliban extremists describes how she...