Nightingale hospitals to be converted into cancer testing centres

The newly-built Nightingale hospitals will be converted into cancer testing centres to cope with a huge backlog of potential cancer patients, the chief executive of NHS England said today.

Sir Simon Stevens claimed there would be a 'radical' change to the way cancer screening is done in the coming months to cope with the growing number of people waiting for tests to find out if they have the killer disease.

It comes amid fears of a cancer time bomb, with leading charities estimating 2.5million cancer patients have missed out on vital tests and treatment this year because of the coronavirus crisis.

Charities have also warned there could be an additional 18,000 cancer deaths in 2020 because of the number of patients who have been diagnosed too late.

Sir Simon told MPs that the Exeter Nightingale site will be the first to be converted into a coronavirus-free cancer clinic starting from Monday.

The hospital, originally built for Covid patients in the event intensive care wards were overwhelmed, will be open seven days a week, from 8am to 8pm. 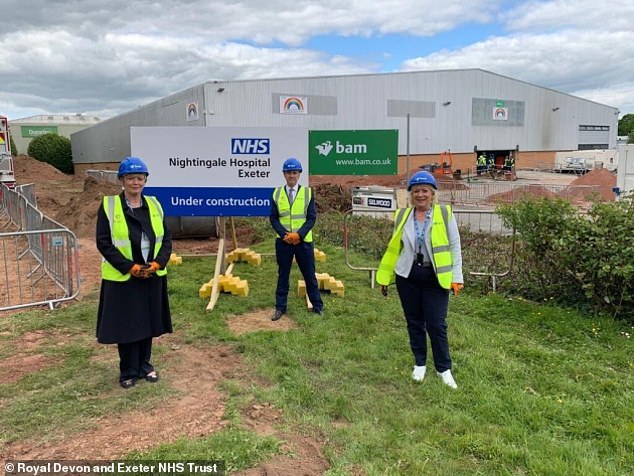 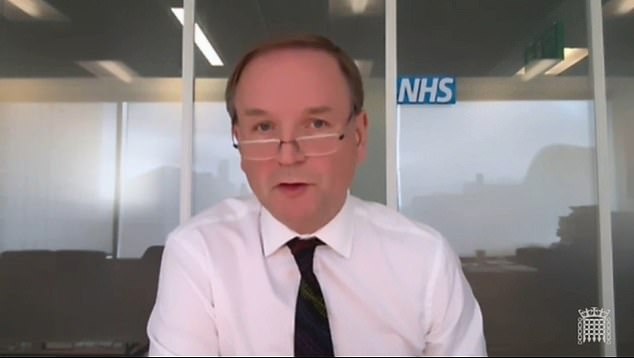 Sir Simon Stevens, chief executive of NHS England, said there would be a 'radical' change to the way cancer screening is done in the coming months to cope with the growing number of people waiting for tests to find out if they have the killer disease

Sir Simon told the House of Commons Science and Technology Committee today: 'It's worth remembering that four fifths of the patients who are on a waiting list are typically waiting for a test or an outpatient appointment, rather than waiting to be admitted to hospital for an operation.

'And given the pressures on hospitals and diagnostic teams are over the March, April, May period, there has been a big a big reduction in the flow of patients through those diagnostic services.

He suggested the Nightingales will be able to see much more patients than standard cancer clinics and said staff will use new types of testing to speed the processes up.

Sir Simon added: 'The first of those is going to be the Exeter Nightingale which we are going to partly repurpose for non-Covid CT scanning that will begin next Monday and run eight until eight and seven days a week. 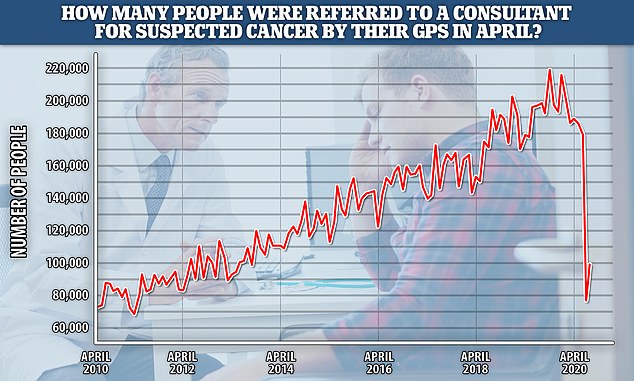 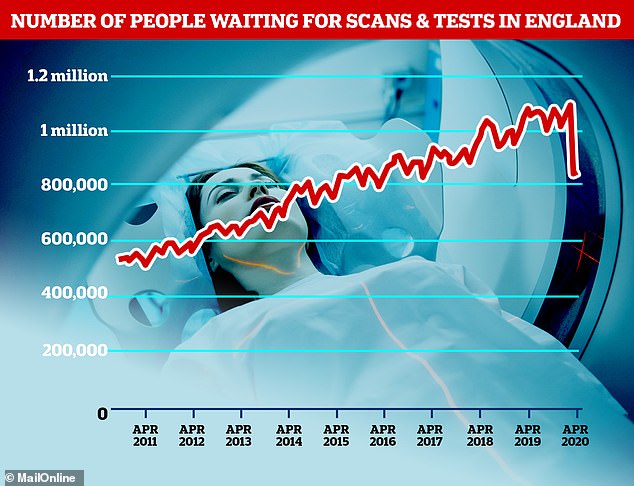 Almost 2.5million patients have missed out on vital cancer tests and treatment because of the pandemic.

The NHS faces the shocking backlog of cases as it tries to return to normal – and also cope with new victims of the disease.

Another 290,000 have missed out on urgent referrals to confirm or rule out tumours.

And at least 21,600 patients have had surgery, chemotherapy or radiotherapy postponed in the past nine weeks.

Some of these procedures would have saved lives or extended them, granting precious extra time with loved ones.

It is also thought patients with warning signs of cancer have avoided seeking help because they are worried about contracting coronavirus in a surgery or hospital.

'So yes, this is an opportunity and a necessity, quite frankly to do something quite different in diagnostics.'

NHS statistics suggest thousands of cancers could have been missed due to a huge drop in referrals amid the coronavirus crisis.

Cancer charity MacMillan says roughly 210,000 people should have been referred in April this year, suggesting roughly 130,000 people were missed.

Around 7 per cent of those would usually require cancer treatment, meaning around 9,000 people might have went undiagnosed.

Experts have told MailOnline 'it's not that there are less people with cancer, it's that they are not being diagnosed because of a bottleneck in the NHS'.

The health service is facing a shocking backlog of cases as it tries to return to normal after shutting down most of its services to cope with the pandemic.

Figures also show the number of people waiting over a year for NHS treatment trebled in April, magnifying the damaging knock-on effect of Covid on the nation's health.

Sir Simon told MPs today that the waiting list for elective admissions to hospitals dropped by more than half a million during the lockdown.

But he said the waiting list will go down before increasing significantly in the second half of the year because of patients' reluctance to go to hospital during the pandemic.

He said: 'The number of elective admissions in March and April was around 725,000 lower than what we might have expected given pre-Covid levels of growth.

'The drop was greatest in April when [there were] around 530,000 fewer elective episodes, that number has begun to recover quite significantly since then.'

He added: 'As we intended we saw a much higher continuation of cancer care including surgery during the March-April period such that although there was a drop-off in referrals we saw around 96% of the usual treatment starts for cancer over that period.'

'Paradoxically, the waiting list will go down before it goes up potentially significantly. The reason for that being that fewer people are coming forward and being referred onto a waiting list.

'We've seen the overall waiting list drop by over half a million people between February and April, but we expect that as referrals return that will go up over the second half of the year.'

Sir Simon also told the Committee there was a 'big unknown' over how much extra pressure has been added to the NHS for mental health care as a result of the pandemic.

He said the extra capital funding announced by the Prime Minister on Tuesday, of which £1.5billion will be going to hospitals, will help NHS providers to phase out outdated distressing 'dormitory wards'.

He told the Health and Social Care Committee: 'There is a big unknown as to how much of additional burden of mental ill health there will be coming out of the last four months.'

He added: 'I think in a nutshell we believe there will be an increased mental health demand but the precise size and shape of it is yet to be determined and seen.'

He continued: 'One of the things we also know is that too many of the buildings and facilities in which NHS mental health care is being delivered are out of date and need a significant upgrade.

'And that's why one of the things I have been personally pushing, and really pleased that the Prime Minister's announcement today [Tuesday] gives effect to, is capital investment to phase out altogether so-called mental health dormitory wards.'

Woman reveals how she avoids the dreaded 'chub rub'

NHS could be behind schedule for FOUR YEARS

Hilarious video shows paraglider crashing into a TREE in...

Earl of Yarmouth and his pregnant wife evicted from £85million...

MOSCOW (Reuters) - Russia has be

Paul Hollywood's girlfriend shows off midriff after his...

How to safely use someone else's toilet

Dozens of puppies on passenger flight found dead on arrival

Dozens of puppies on passenger flight from Ukraine to Canada are found dead on arrivalWARNING...

The scoop on 'healthy' ice cream

Why skipping dessert may be good

Boris Johnson 'is 'unfit to be PM', says journalist

'I'm still waiting for an apolog

Heatwave will smash 2020 record three days in a row