Mother accused of taking part in 'love triangle' murder of

Mother accused of taking part in

Mother accused of taking part in 'love triangle' murder of teenager was seen in her dressing gown carrying a hammer shortly before he was stabbed to death, court hears 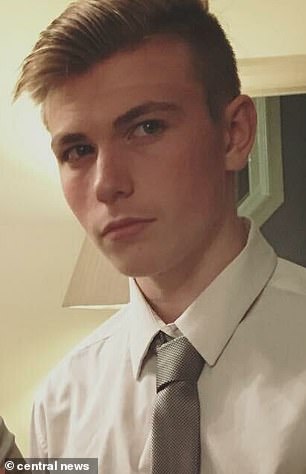 Jay Sewell, 18, was fatally stabbed on December 11 last year by a nine-strong group, it is claimed

A mother accused of taking part in the 'love triangle' murder of a teenager was seen in her dressing gown carrying a hammer shortly before his death, a court heard.

Jay Sewell, 18, was fatally stabbed on December 11 last year by a nine-strong group including Daniel 'Joe' Grogan, 20, after Gemma Hodder, started seeing the teenager, it is claimed.

Grogan had allegedly spread his 'poison' to friends and members of his 'close-knit family' who were 'armed to the teeth' when they set about Mr Sewell last December 11.

The weapons they wielded included knives, baseball bats and a four-foot long fireman's axe, a jury at the Old Bailey heard.

Justin Hussein was dropping his partner's daughter and two friends off at a friend's house when he saw a man and woman leave a house and walk towards his black seven-seat Peugeot.

Speaking behind a screen in court today, Mr Hussein said: 'They were walking over to the car. It was dark, there was definitely two at the front and there was possibly two or three behind.

'They kind of walked towards the car and then when they realised we were not the people they were looking for they just kind of turned around and went back in the house.

'She did the same, walked off realising we were not the people she was expecting. She was probably late 40s and 50s wearing a dressing gown carrying a hammer.

'I remember she was carrying a small kind of box in the other hand. I think it was a knife box because I was a fishmonger for a few years.

'She looked more angry - she was kind of more focused.'

Mr Hussein's partner, Zara Belcher, told the court she asked her partner to lock the doors of their car and waited until the gang had gone back inside. 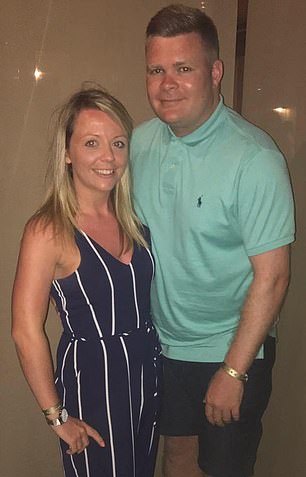 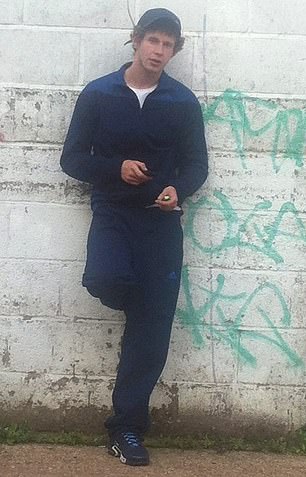 'The male was by her side. They came from a house which I assumed was their house. There were three people behind them.

'They looked in the car and I think they realised we were not who they thought we were, and they backed off into the house.

'I stopped one of the girls getting out.' 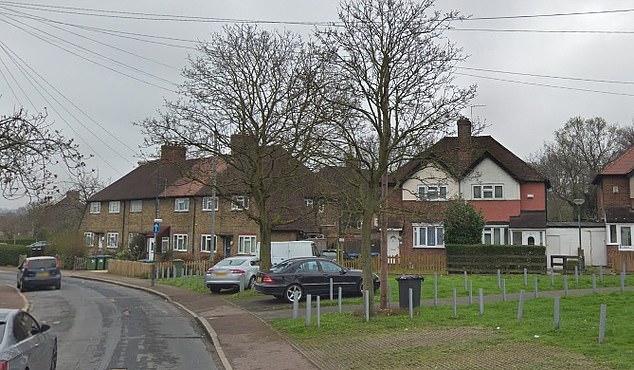 Dr Charlotte Randell, a pathologist who carried out a post-mortem on Jay's body, described how the fatal wounds were caused by a 15-cm kitchen knife with a grey plastic handle.

She continued: 'Death was due to the stab wound to the chest. There is blood loss so that results in low blood pressure and then there is collapse and loss of consciousness and death.'

Asked how long Mr Sewell could have remained upright after the wound, she replied adrenaline could prolong the struggle, but collapse was often within minutes.

He also suffered wounds to his left calf.

Jurors previously heard Daniel Grogan sent Ms Hodder a flurry of messages in the days leading up to the killing, warning: 'I swear on everything he's a dead man Gemma'. 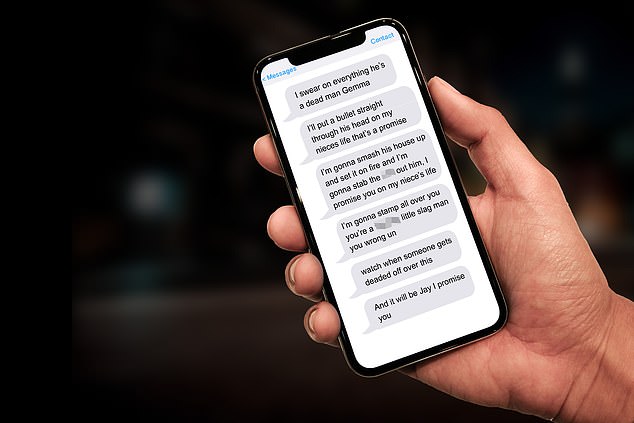 Jurors previously heard Daniel Grogan sent Ms Hodder a flurry of messages in the days leading up to the killing, warning: 'I swear on everything he's a dead man Gemma'

These included: 'I'll put a bullet straight through his head on my nieces life that's a promise' and 'I'm gonna smash his house up and set it on fire and I'm gonna stab the s*** out him, I promise you on my niece's life'.

Rossano Scamardella, QC, defending Dudley, asked Ms Hodder: ''Jay's not scared.' Is that what you thought at the time?'

Tourists flock to Blackpool after it was excluded from...

Boy, 17, charged with common assault after man pushed into...

Boy, 17, is charged with assault and drug possession after man was pushed into a...

Leonardo da Vinci's 'quick eye' allowed him to spot that a dragonfly's wings are...

Ruth Langsford's sister Julia passes away after a 'long...

'My heart is completely broken':

French cop kicks Briton's head during arrest for 'not wearing...

French cop kicks and stamps on British man's head as he is arrested for 'not wearing...

Eighty-four hot dogs is the maximum any human can eat in...

All-you-can-eat: 84 hot dogs is the maximum any human can consume in 10 minutes...

Aristocrat related to Camilla LOSES Supreme Court fight to have his seven-year £5m...

Prime Minister Giuseppe Conte is being questioned by prosecutors from northern Italy...