By Ian Herbert For Mailonline

Phil Neville's recent World Cup haircut has revealed some grey strands and there will be more of them now after his England team progressed to the World Cup quarter-finals in shambolic circumstances, with VAR at their core, which left Cameroon complaining that they had been the victims of a racist conspiracy.

The suggestion was ridiculous. England's opponents, whose technical levels were desperately poor, were justifiably sent a goal behind by VAR, marginally denied a goal by the same process, and lacked the professionalism to accept the fact.

It was regrettable to see one of their players Ajara Nchout, crying tears of frustration in the tunnel and again on the pitch, but the pantomime was deeply undermining to the credibility of the women's game. These scenes were straight out of the schoolyard. 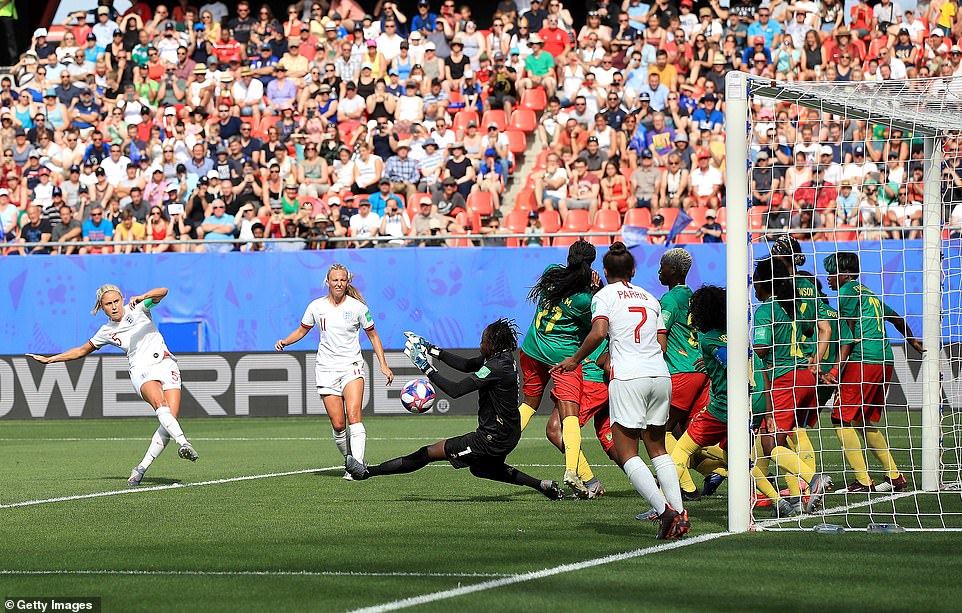 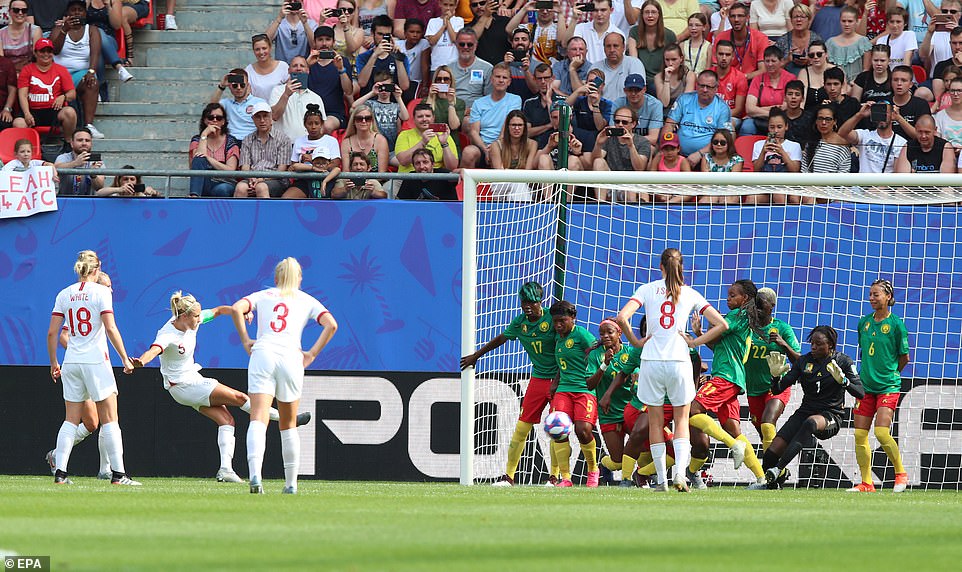 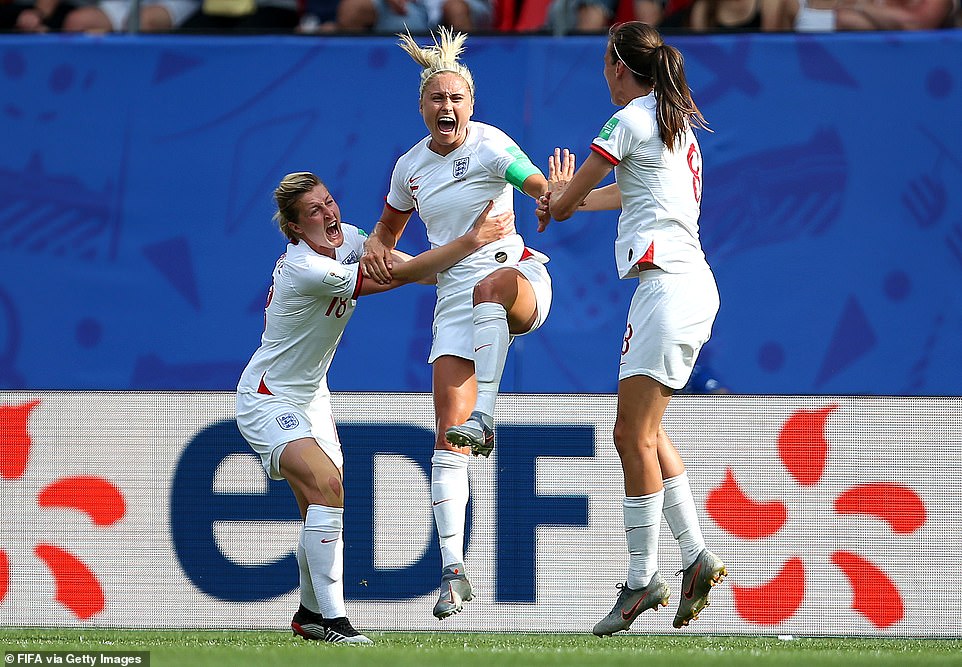 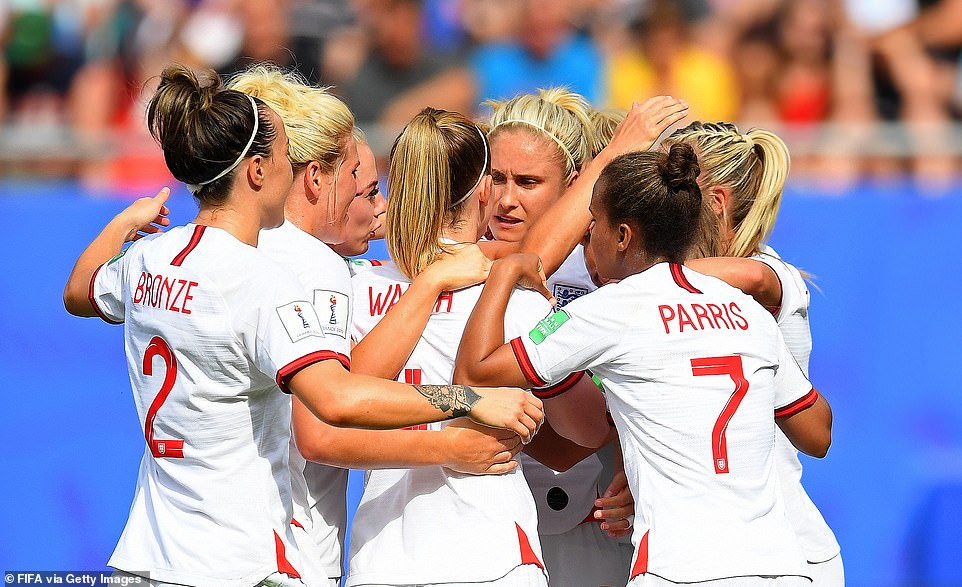 Ratings by Janine Self

In the tunnel at half time, Cameroon's players were claiming this was racism - the perpetrator presumably being FIFA. It was to England's credit that they navigated a course through such madness.

Keira Walsh was one of several England players to console Ajara on the field and Neville kept his cool as much as the players. Other managers would not have done.

There has been a surface politeness in the foyer these past few days when it transpired the two teams were both staying at the same Royal Hinaut Spa Hotel but the niceties did not extend to the field.

The Indomitable Lionesses were as good as their name, looking very much like a team coached by an individual - Alain Djeuma – who is known as 'Mean Dog.'

VAR, all-seeing to the point of pedantry at this tournament, somehow did not pick up the unadulterated elbow delivered flat into Nikita Parris' face by defender Yvonne Leuko, which floored the Liverpudlian in the game's third minute.

Toni Duggan was spat on at one stage as the African nation – second only to China for fouls committed in the group stage – made their intentions clear.

'We have something up our sleeve,' Djeuma had said on Saturday night.

England calmly located a higher plane, finding their passing combinations in a first half in which Parris and Duggan switched flanks and Fran Kirby reached the standards she would have hoped for in the group stage. 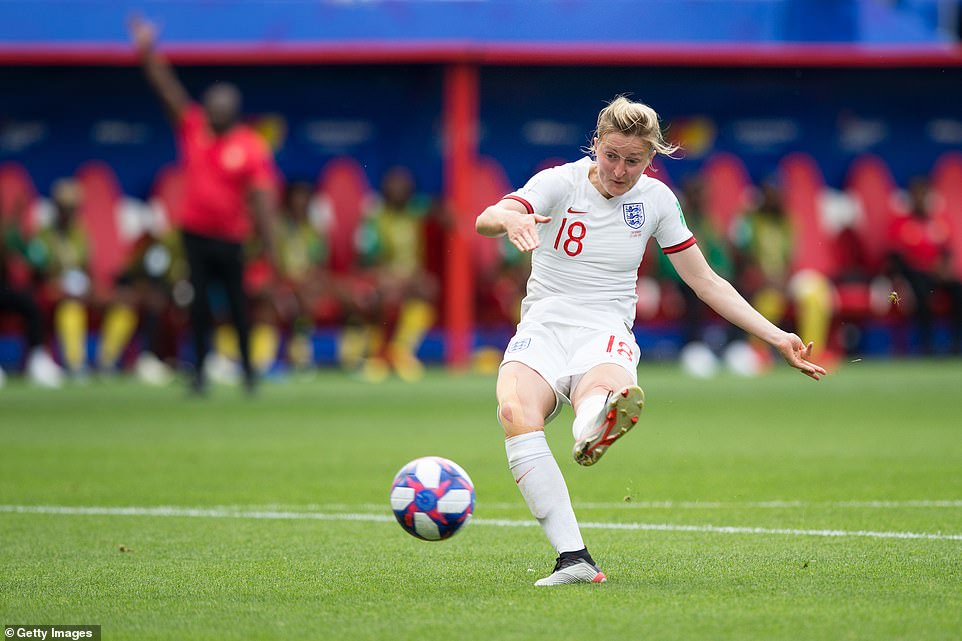 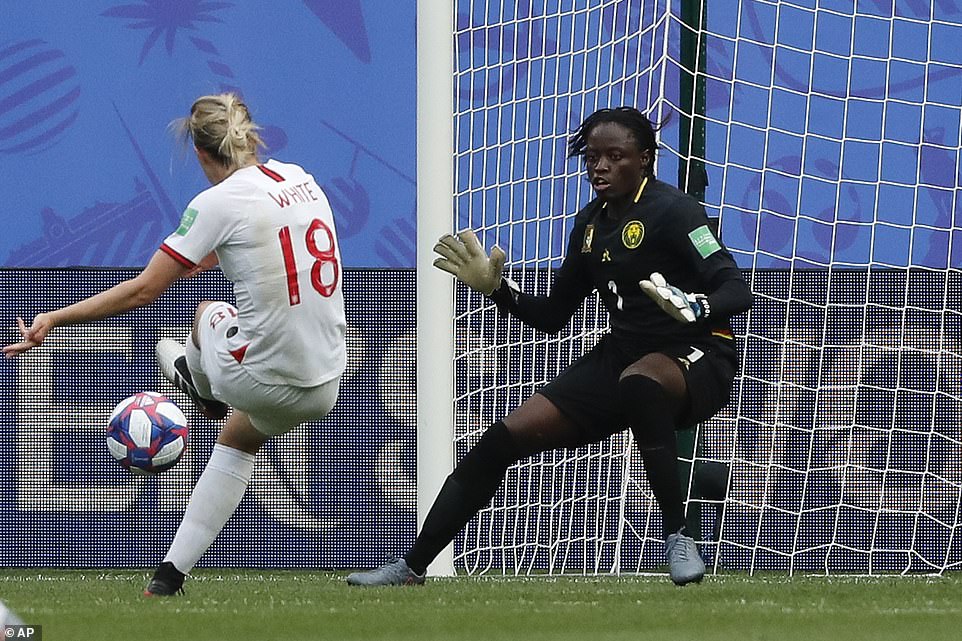 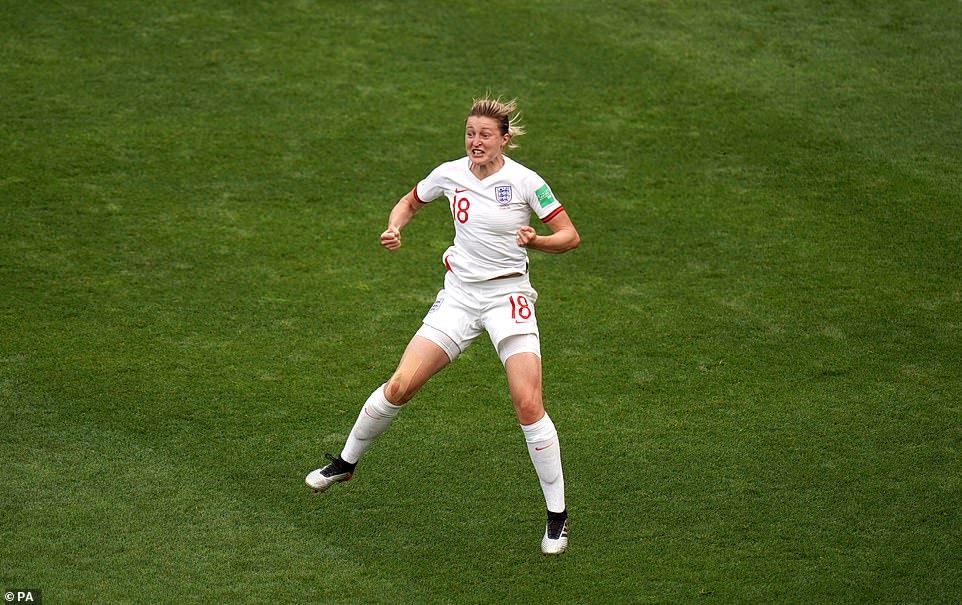 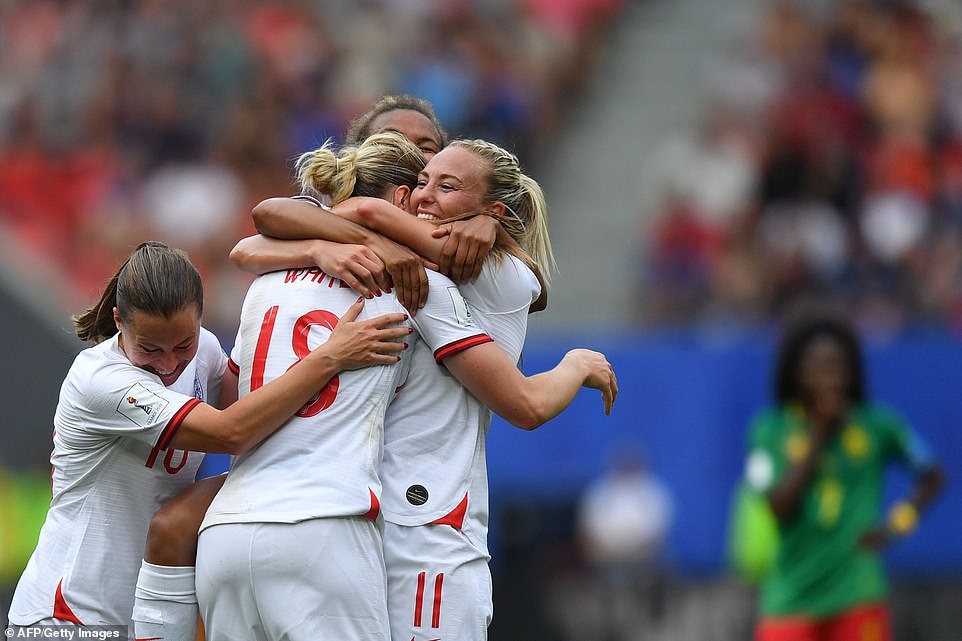 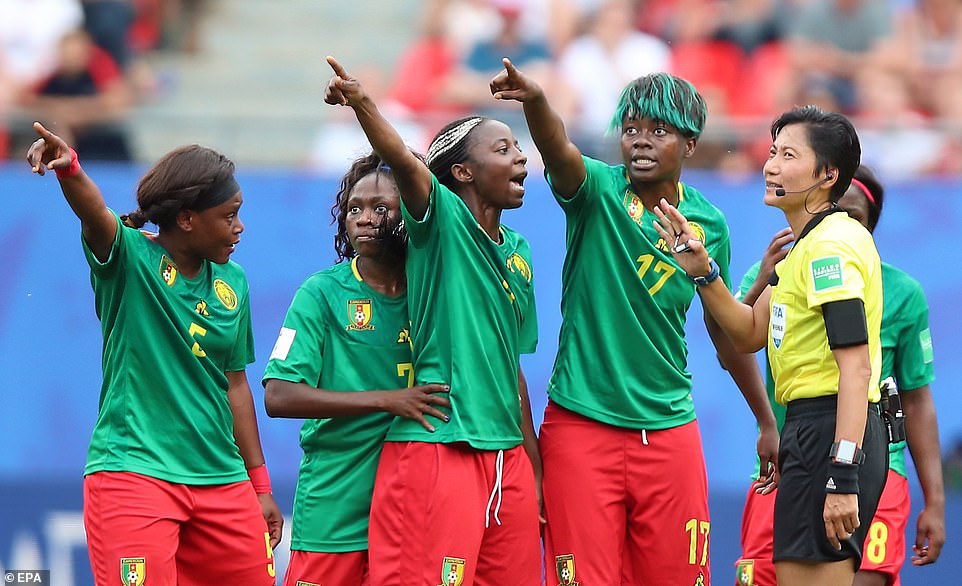 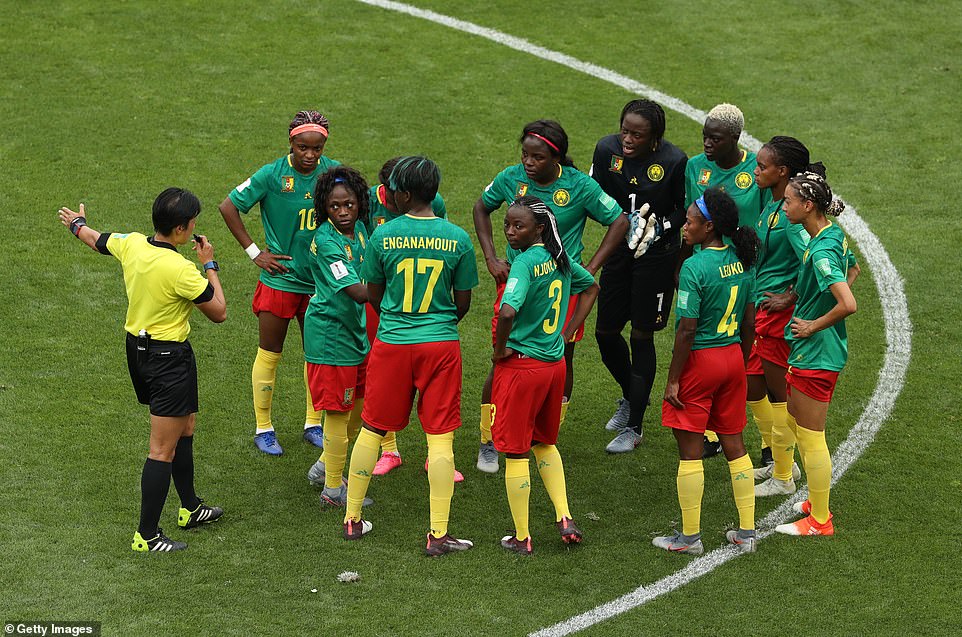 They were playing opponents whose football was often pitiful. It is an embarrassment to the women's game that a team such as this have somehow found themselves in a World Cup round of 16.

The opening goal was the first episode straight out of the schoolyard. A pass back to the goalkeeper Annette Ngo Ndom by Leuko – a player way out of her depth – presaged an indirect free-kick, from the edge of the six-yard box which Steph Houghton steered adroitly past Ndom with the entire opposition lined up on the goal-line.

It was the third time in four World Cup matches that England had scored in the 14th minute, and though the anticipated Cameroon threat – pace in pursuit of the ball behind – never materialised, a second goal seemed important in the draining, muggy afternoon.

It came, with the assistance of VAR on the stroke of half-time, after Lucy Bronze's deft ball with her right outstep sent in Ellen White to score her fourth goal of the tournament. The lineswoman's decision to rule the goal out was clearly flawed and it inevitably counted.

The first of the Cameroonian protests was swift and strong, players massing in the centre circle, pointing at the replay which demonstrated categorically that the decision was correct. Parris, offside in the line of attacking players when Bronze played her reverse pass, was well out of the realm of interference with play. 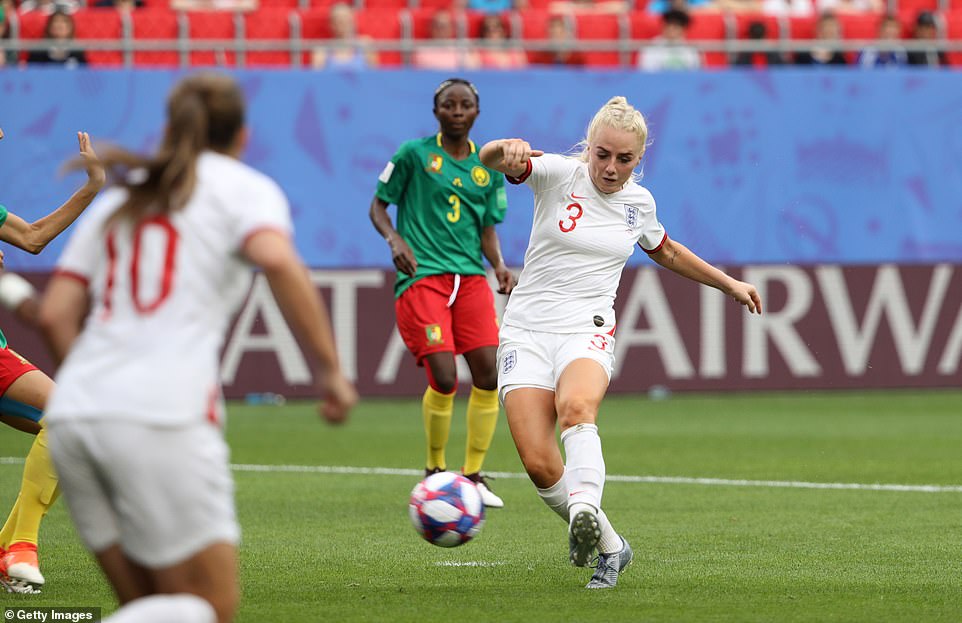 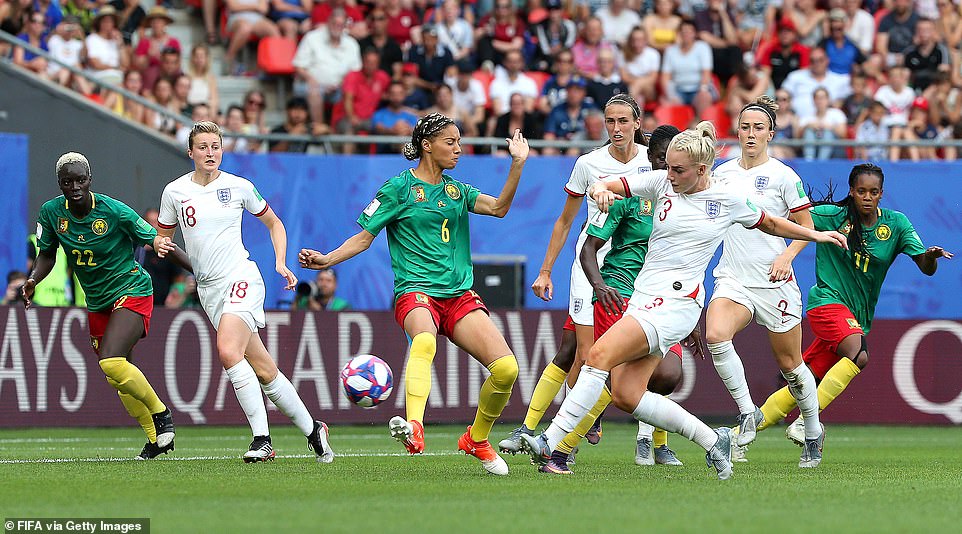 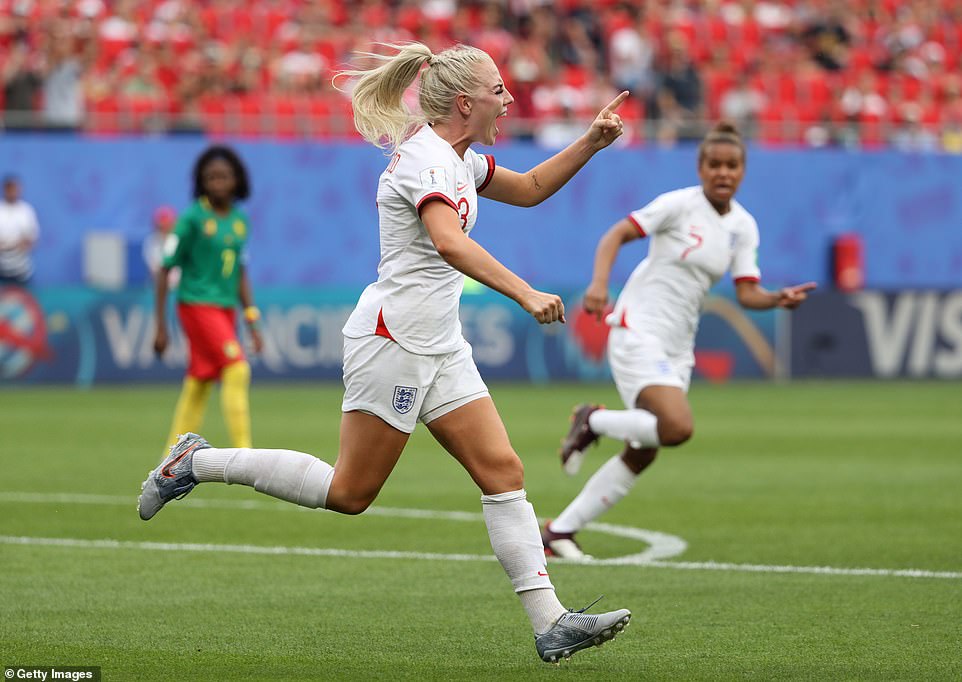 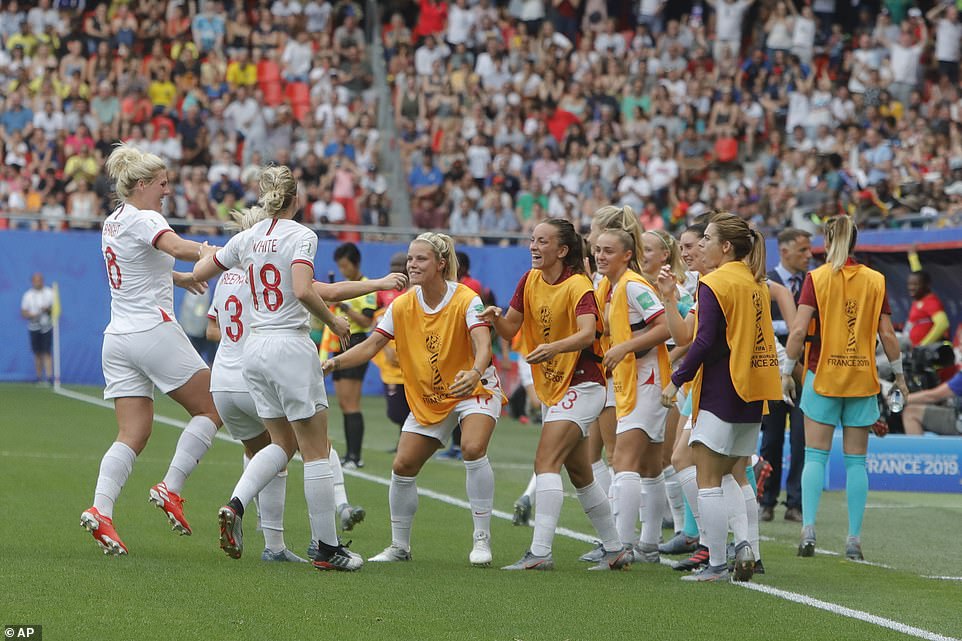 The protests continued after England had left the field for the interval and clearly had a detrimental effect after the break. A kamikaze clearance by goalkeeper Karen Bardsley to Bronze proved uncontrollable, Cameroon recycled the ball down the left for Ajara Nchout to score and VAR ruled against them again.

The fractional offside presaged another brief refusal to play on.

Alex Greenwood's loose back pass allowed substitute Alexandre Takouda in on Bardsley, who saved the defender from embarrassment. The defender then compensated just before the hour, arriving to meet a Duggan corner with a clinically struck first-time shot to put England out of reach.

By the end, the VAR officials were demonstrating evidence that they feared provoking further Cameroonian upset. Kirby was on the receiving end of a bruising challenge from Augustine Ejangue in the area – it looked like a stamp on her foot - as she set up substitute Jodie Taylor for a chance.

This penalty review went against England. It was a poor miss by Taylor who also saw Estelle Johnson clear off the line but Neville will just be mightily relieved to put all this behind him.

England's death rate is back to normal for the first time...

Beauty salons gear up to reopen TODAY with Perspex screens, visors for staff and...

Now TEN schools tell pupils to wear face masks for when they return in September...

THE HAGUE (Reuters) - The Suprem

France: has not had satisfactory response from Iran over...

Four members of BT Sport pundit John Hartson's family - including his sister and...

Trump looks to 'maintain his engagement' in meeting with...

FILE PHOTO: A thermometer and a sanitising gel are seen outside a classroom during...

Moment police tackle killer husband to the ground 24 hours after he strangled his...