PICTURED: French-born Canadian woman, 53, suspected of mailing ricin to President Trump at the White House and to law enforcement in TexasPascale Ferrier, 53, from Quebec, Canada, identified as suspec

PICTURED: French-born Canadian woman, 53, suspected of mailing ricin to President Trump at the White House and to law enforcement in Texas

The woman accused of mailing envelope containing ricin to President Trump and to to law enforcement in Texas has been identified as a 53-year-old a French-born resident of Quebec who previously served time in a Texas jail.

Court records first obtained by CBC named the suspect as Pascale Ferrier, who was arrested on Sunday by the US Customs and Border Protection on the US-Canada border near Buffalo, New York.

She is expected to make her initial appearance in federal court in Buffalo later today. 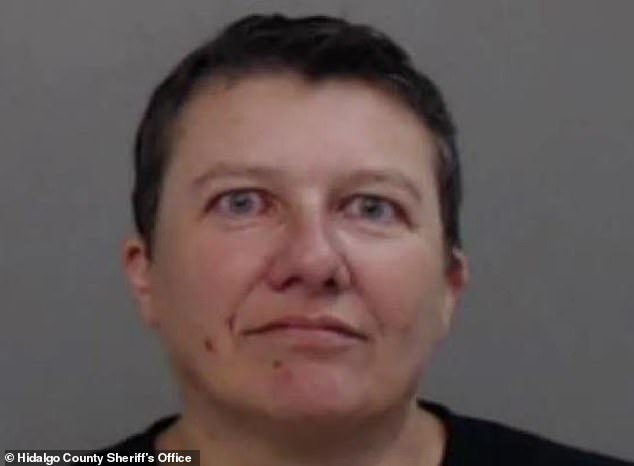 Named: Pascale Ferrier, 53, a French-born resident of Quebec, has been identified as the woman suspected of mailing ricin letters to President Trump at the White House

Authorities believe Ferrier sent a total of six letters; one to Trump and the others to people in Texas.

Ferrier, a native of France, became a Canadian citizen in November 2015. According to sources speaking to CTV News, she works as a computer programmer.

Ferrier had been living in the US last year and was arrested in Mission, Texas, in March 2019 for knowingly using a fake driver’s license.

Ferrier pleaded not guilty and served 20 days in jail before prosecutors dropped the charge because it was her first offense.

Just weeks after regaining her freedom, Ferrier was deported back to Canada for overstaying her six-month visa, the New York Times reported. She was said to have moved to Laval, Quebec.

The first poison-tainted letter allegedly sent by Ferrier was intercepted earlier this week at the final offsite processing facility where mail is screened before it reaches the White House. A preliminary investigation confirmed the presence of ricin from Canada.

The letter addressed to the White House appeared to have originated in Canada, the Royal Canadian Mounted Police have said. 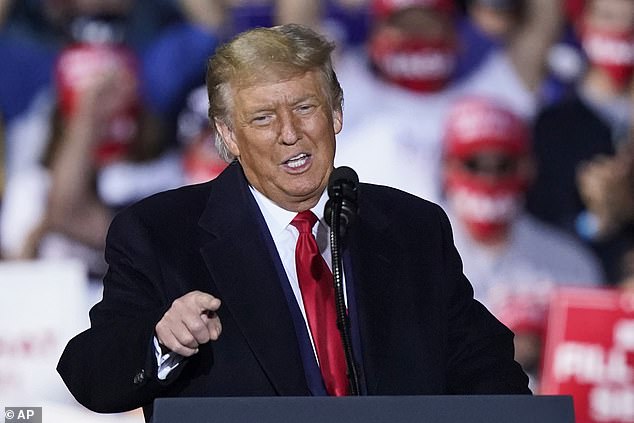 The official did not say which agencies were sent the envelopes but said they are believed to have been mailed by the same person who sent one to the White House.

The officials were not authorized to discuss the ongoing investigation publicly and spoke on condition of anonymity.

One of the envelopes was sent to the police in Mission, Texas, said Investigator Art Flores, a spokesman for the border community’s police department. He said no one was hurt.

Although Flores did not specify which agency, Sheriff Eddie Guerra of the Hidalgo County Sheriff's Office revealed he had been a recipient. 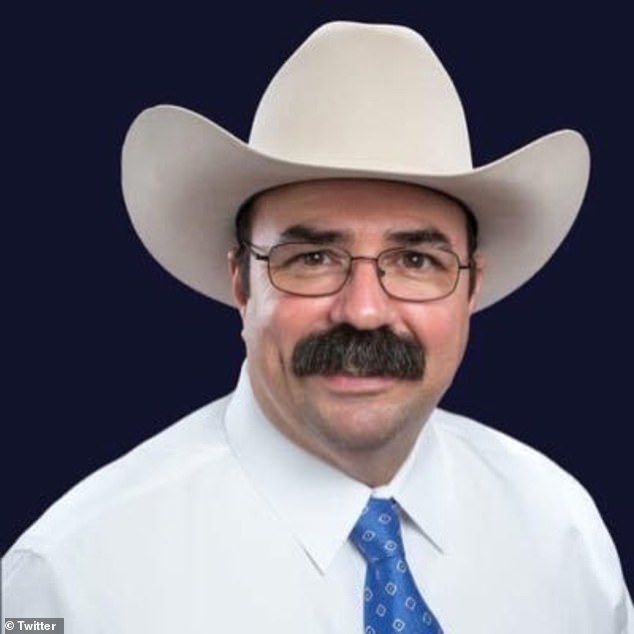 It was not immediately clear when the envelopes reached Hidalgo County, which contains Mission and the city of McAllen.

In a tweet, Guerra said they he and three staffers had received the dangerous envelopes in the mail.

'I can confirm that envelopes, containing the deadly toxin ricin, was mailed to me and three of my detention staff.' he wrote.

'At this time due to a active federal investigation I cannot make any further comments but a media release will be sent out tomorrow. No injuries were sustained.' 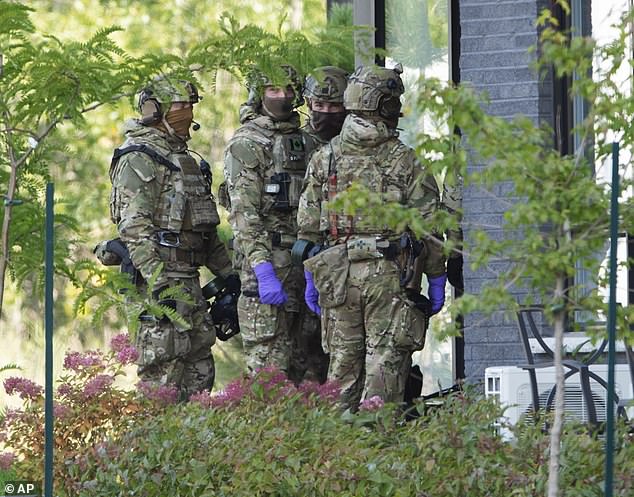 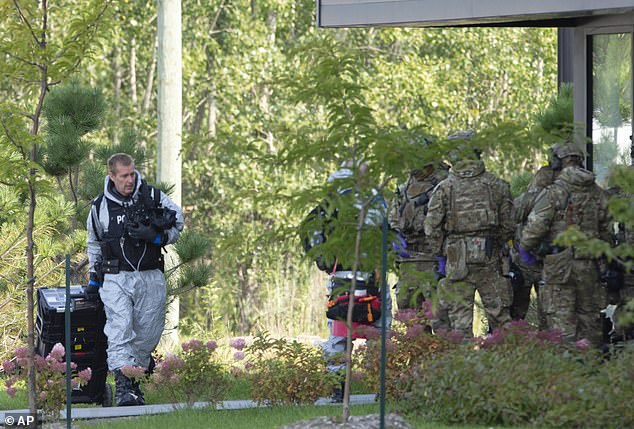 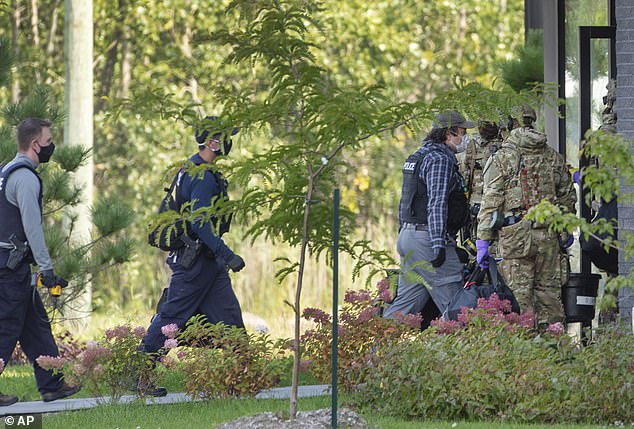 The woman remains in custody in the US. She is thought to have been arrested by the FBI

Canadian police on Monday swooped on an apartment complex in Montreal in connection with a ricin-laced letter that was sent to Trump.

While there, police roped off a modern beige and brown apartment building and evacuated its inhabitants.

On Saturday, the RCMP confirmed that the letter had apparently been sent from Canada and said that the FBI had requested assistance. 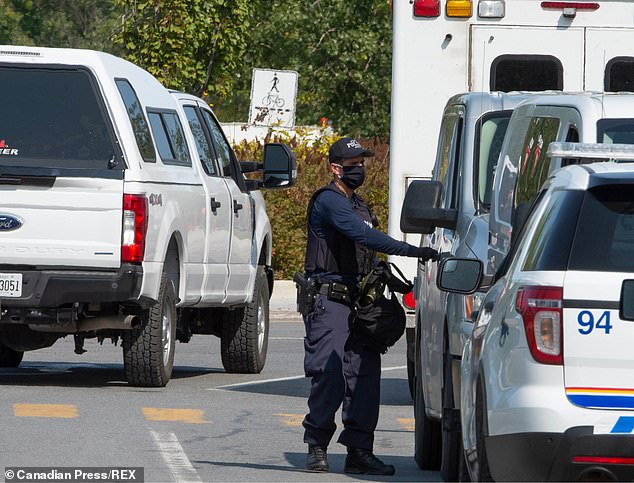 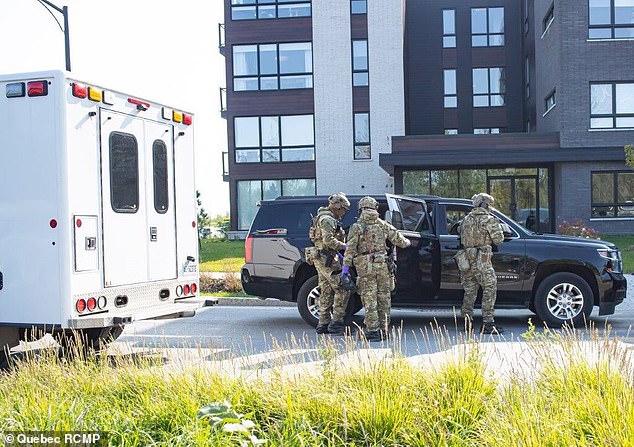 It's unclear how the woman became connected to the ricin plot. She was arrested on Sunday trying to enter the US 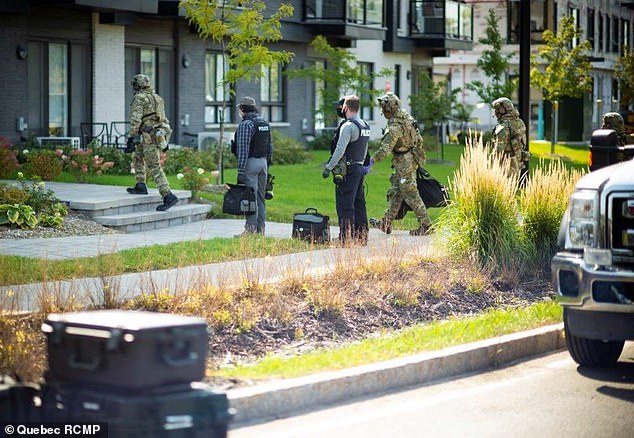 The RCMP said the search is being led by chemical and explosives teams. They do not think there is a threat to the public 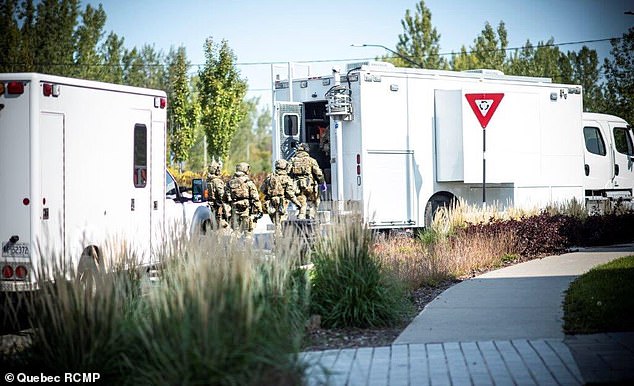 Teams entering a van on Monday during the search. Police in Canada say the woman sent six letters in total

Ricin is found naturally in castor beans but it takes a deliberate act to convert it into a biological weapon.

Ricin can cause death within 36 to 72 hours from exposure to an amount as small as a pinhead. No known antidote exists.

Elephant rams a safari truck and shatters its windscreen

Kim Jong-un and Xi Jinping discuss affairs of state at...

Death toll in hotel attack in Somalia's Kismayo jumps to...

Shocking moment police raid huge funeral wake with over 200 guests in breach of...

Outdoor festivals, plays and opera to return from Saturday

Outdoor festivals, plays and opera to return from Saturday - but 'limited and socially...

Elderly parents of disabled 23-year-old man who vanished in 1992 when he went into...

Ghislaine Maxwell, a daddy's girl who never escaped his...

One of the cops charged in George Floyd's 'murder' is confronted...

One of the four ex-cops charged in George Floyd's 'murder' is confronted by a furious...

Sport Direct boss wants to expand his empire into empty...